We couldn't have asked for a better day for this ride. It would be Gavin's first organized gravel grinder. It would be my second gravel grinder in Pennsylvania this year, one that I hoped to finish this time. Early in the spring Will and I attempted the Lu Lacka Wyco Hundo on a cold and miserable day only to bail at the first rest stop because we were soaked and freezing. 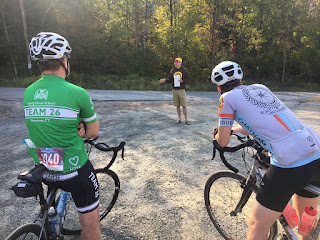 That wouldn't be the case today. 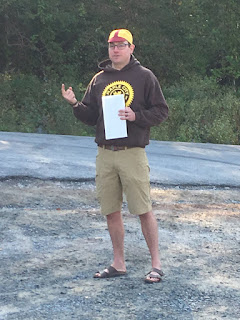 Zach gave the pre-ride brief to the 100 mile riders. We decided to leave with them figuring that we were going to average 10 mph and given that the two Metric rest stops were also 100 mile rest stops there was no risk of getting to them too soon. 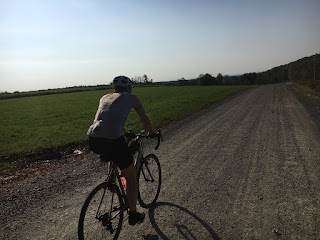 We got to First Dirt after a one and quarter mile climb from the start point. It was paved but really steep. 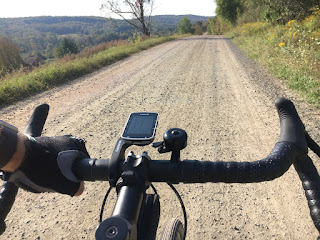 I was a quarter of a mile up the hill when I realized I forgot to turn on my Garmin.  I figured if there was still gas in the tank when we got back I would ride up the hill again to record that last bit.  By the end of the ride the Give-a-Shit meter was redlined so it didn't happen. 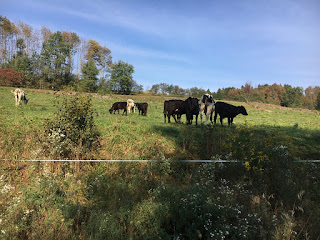 There was an abundance of cows on the route today. 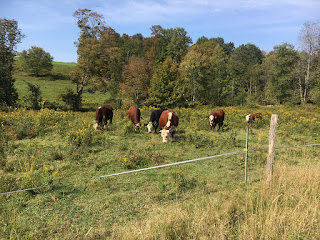 Besides seeing plenty of cows what made this ride especially enjoyable was that there wasn't really any insane climbs like those hills you would find on D2R2 route or at F2G2.  The climbing here was subtle but still very abundant. 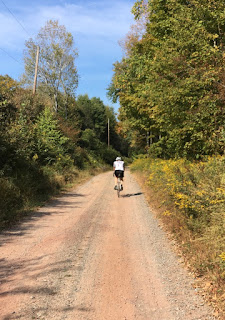 The red clay mixed with lighter grey gravel was different. It seemed to cling to the bike more, though. As the day wore on the temperature began to rise but it wasn't unpleasant. 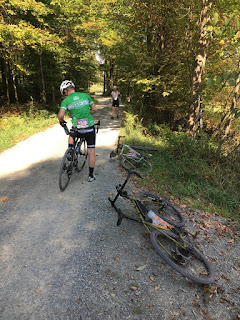 We had the roads to ourselves. We encountered a few sag wagons but on the dirt roads we rarely saw any other vehicles. 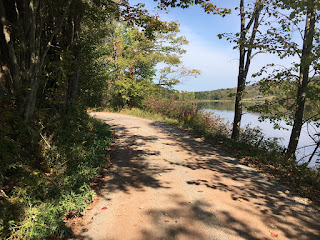 Riding along this pond reminded me of riding West Shore Road along Lake Waramug, only we were riding on a dirt road. The first rest stop was supplied with just about everything you could want for a warm day of riding gravel. While I had breakfast I realized, only after I was a mile into that first climb that I should have brought more food because imagined that a lot of energy would be needed. 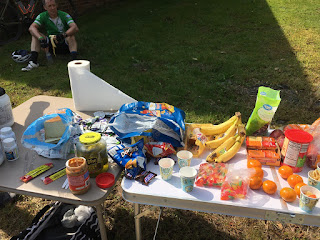 I made up for not bringing enough food by going to town at the first rest stop. I really chowed down and had pickles, a peanut butter and banana sandwich, gummy bears, tangerines, Fig Newtons, trail mix and Slim Jims. Washed it down with a Gatorade, a coke and water. I even took two electrolyte capsules they had on hand for fear of cramping. 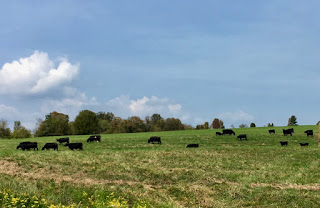 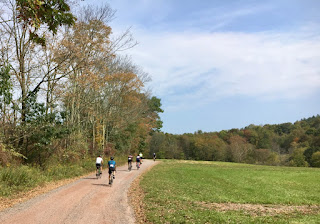 As we were about to leave the first rest stop a group of guys rolled in that were on the Metric as well. They caught up to us a little further down the road and then they were gone. After a really, really steep descent did we come to the Delaware River. Since this route was the reverse of last year and if Zach alternates the direction every year then next year's ride back up Rock Run Rd will be a total B#tch! 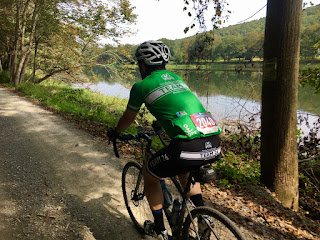 River Road was mostly flat and riding along the river was really pleasant, and the temperature seemed to be held at bay, too. 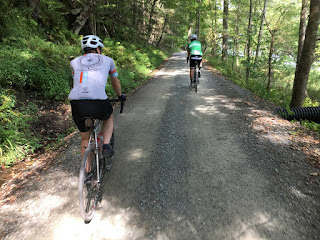 There was this really cool waterfall that must look spectacular when there is a lot more water. 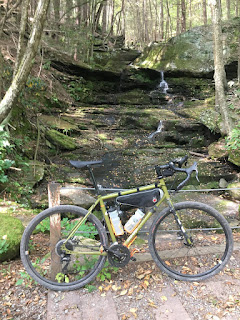 We had to settle for a trickle. 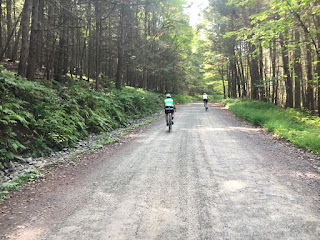 Turning west we started a 4.5 mile climb up from the river to Bush Road that had an average 3.5% grade. Halfway up the climb one of the guys that had passed us earlier came back down the hill. I thought he didn't get the KOM and was coming back for another shot at it. Turns out, as we learned from him at the next rest stop that he was on the 100 mile ride and had taken a wrong turn and was backtracking. 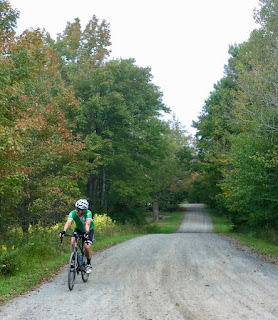 Clouds started coming in and it cooled off a bit. Gavin, however, was having some back pain and took this climb a lot slower. What I found interesting was this big climb was all grey gravel. 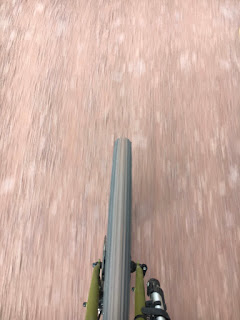 Then, turning onto Bush Road the gravel was red again. 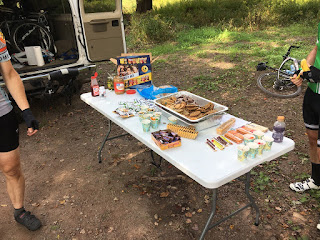 The food selection at the next rest stop was a little lighter but then again there was only 9 miles left on the course. Even though I didn't feel that hungry I still ate a lot. From here we had a flatish climb on a paved road for 3 miles. Right before turning onto Rodenburg Road I almost got T-Boned by a fawn jumping out of the woods. Then Gavin had an almost similar experience by a much bigger dear jumping out behind him. 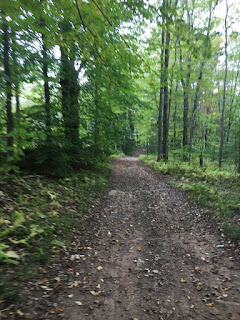 Rodenburg Road started out with a one mile climb with an average 5% grade and then flattened out into a 4x4, Jeep road, with lots of mud and mud bogs to ride around. At the end of the road it climbed again and it finished with a steep, rocky climb up to a paved road. 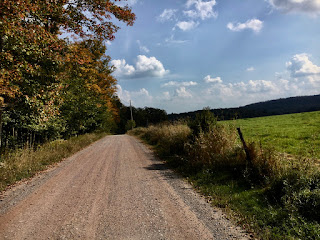 The road turned to gravel again as we got closer to Duck Harbor Pond.  On the east side of the pond the road turned west and started a 4 mile climb up to Cochecton Turnpike. On that climb, Gavin slowed quite a bit and we encountered other riders that never passed and must have been on the 100 mile ride but were bailing. 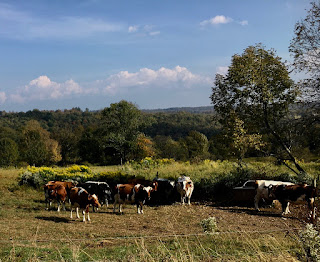 Of course there were more cows! 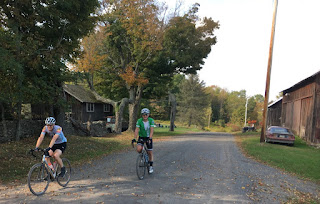 The last climb was on Niles Pond Road. It had the weirdest surface. It was like chip seal with chunks of rock. Or it was asphalt at one time and had been plowed so many times that top layer was just worn away.  Once we got to the top we had a 5 mile descent back to the starting point! Our average speed for the ride was 11 mph which was a little faster than what I thought we would do.