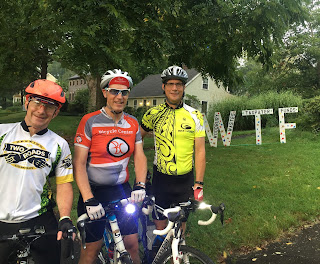 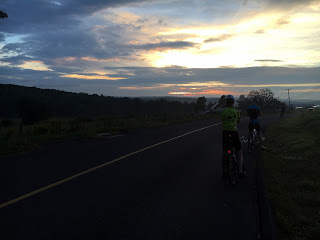 The ride got off to a late start because Johanna was late.  Michelle texted and said he was running a bit late but got to Sandy Hook and was ready to roll as Johanna rolled in.  We headed down to Lake Zoar and then climbed our way up Spruce Brook where we greeted with a somewhat obscured sunrise.  Still, a worthy site at 6:15 in the morning. 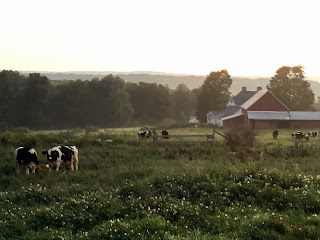 The cows were taking an interest in our activity of taking pictures and selfies with them and the sunrise. Then we bombed down Spruce Brook.  Most of us took it a bit slower due to the wet road conditions. Johanna the Bullet Proof took off trying to claim the KOM on the descent but he didn't get it. 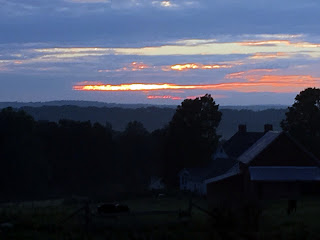 We continued on the usual route up 172 to Transylvania Road but instead of turning towards Rt 6 on Rt 317 we went left and followed the bike path to the Woodbury Post off.  From there, we continued till we found the sign.  The funny thing about the sign is that there are two news stories, one from WFSB that has been copied by every local newspaper and then the story from Fox61 that actually has a lot more information than the other story but lacks a clear explanation as what the guy's beef with the town is. 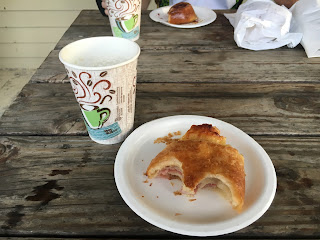 A quick picture for Facebook and Instagram and then we were hammering towards the real attraction of our Friday ride, The Ovens of France! Naturally, I had the French Roast and Ham and Cheese Croissant which is out of this world!


Riding back to Sandy Hook went quickly and then we were off on our separate ways to get ready for work.  It was pretty humid and when I got back to the car I was absolutely drenched.  Still it was a great ride with great friends.  The Lunartics has grown to 6 riders!
at 10:52 PM