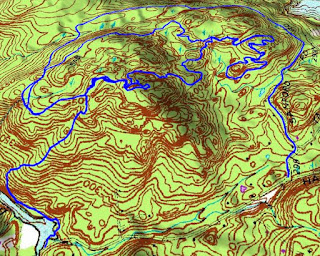 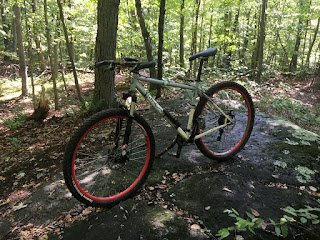 It poured like crazy Saturday morning but knowing that the Gussy is real sustainable singletrack that it would be fine for a quick rip.  I went in from Echo Valley and easily got up Poly Brody to the trail head.  Rocks were pretty greasy from the rain so I figured I would take it easy. 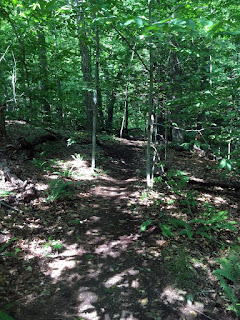 As usual the Gussy is still rocking.  I cleared some blown down branches here and there and noticed some good additions like a new up the hill turn.  Now why didn't I think of that?  Of course the foot rake job to mark the trail is a little lame but this fall I think I will come in and make it nice, nice. 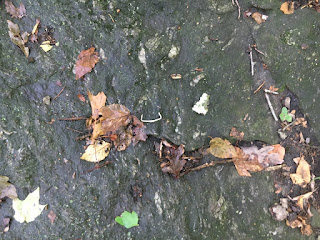 A top the Brew Crew roller I saw this disc brake pad spring.  I checked and it wasn't mine thankfully. Who ever it belonged to I hope they didn't loose their pads out on the trail.  That would suck.  Headed down from here and looped back on the Reach Around.  On the way back to the Gussy on the Jeep Trail I said to my self that I need to run a connector straight into the Gussy rather than having to bang that 90 degree turn. 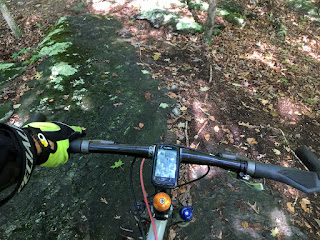 I headed back north on the Unmarked and Unsanctioned Trail and it's breaking in nicely.  I can live with the fall line climb but something needs to be done about the stream it runs right through the middle.  In fact, all the stream crossings on the Gussy were bone dry, even the Wet Spot, but this section on DSP had water in it. I think a reroute is needed. In fact if you were do it right you could get another mile of trail out of it and hit some really neat features. 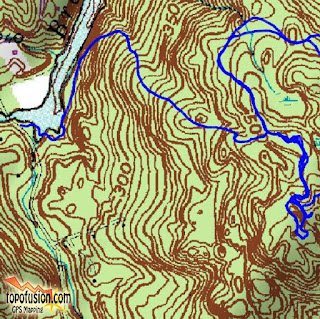 Instead of heading down the Mulikin, I hooked back to Gussy and then picked up the new trail I had been told about.  I tried it for a bit but found it to have absolutely no flow, stupid, tight turns and all sketchy stuntry.  In fact, from the section that I rode it reminded me of Chimney Trail at Huntington. 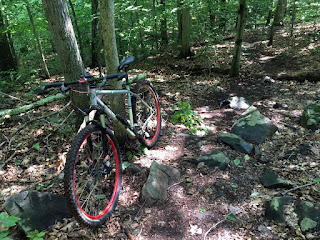 Bailing on the new crappy trail I hooked back on the Gussy and then took the Horse Trail Connector to the Blue Trail but was only on that for 10 yards when I found a purple blazed trail.  With the exception of one fall line climb (going the other way) it was pretty good.  I rode that to the Mulikin and then down to the Pond Brook Connector.  At the intersection I gave directions to two disoriented hikers.  They thought they were in Lower Paugussett and only had maps for such.  I told them where they actually were and how to get back to their car parked at Echo Valley.  By the time I got home I was drenched head to toe with sweat!
at 5:14 PM