The Tour de Roxbury is an invitation only, group ride, (and unofficial gravel grinder) that follows bucolic dirt roads in lower Litchfield County. The group/invitees are mostly elite riders from all over the tri-state area with one thing in common, a friendship with Stephen Badger. 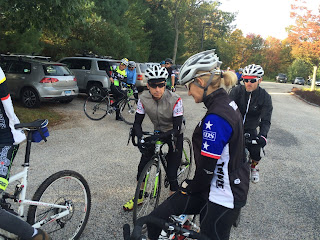 My interest in riding gravel actually started because of the Tour de Roxbury. Back in 2009, Stephen and I started working together on the same team. He invited me to the TdR that fall and while I was just a knuckle dragging, mountain biker and truly nukulturny when it came to this type of riding, after my first TdR, I was hooked. 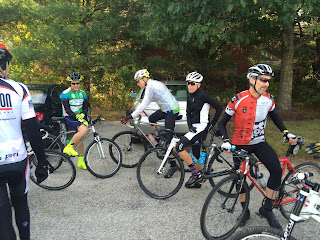 On my first TdR, I got dropped on the first hill and ended up making my own go of things. In the 6 years since that time, I haven't been able to attend a TdR due to kids birthdays and other family events in October but this time things fell into place and I was able to attend!  Ever since my first TdR, I have been riding the dirt roads of lower Litchfield County regularly. 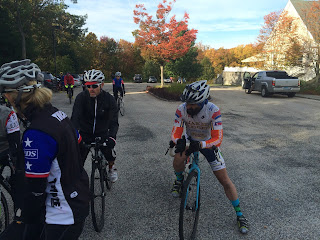 Six years later, a lot has changed. I have probably ridden over a 1000 miles of dirt roads in lower Litchfield County. I have ridden a variety of bikes that have been propelling me higher and higher in my ability to ride longer and in the past two years, with my conversion to mostly road riding, I have gotten a lot stronger, too. 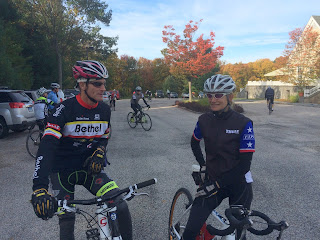 All that said, I probably should still win the biggest Fred award because I showed up to the ride on Sunday, October 11th, without a helmet. Doh! Fortunately, the owner of Class Cycles, Greg Meghani, had a mountain biking helmet I could borrow. The ride started unceremoniously when Badger just started riding out of the parking lot and we were off. 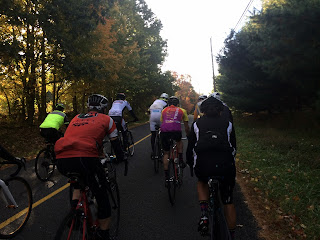 I felt pretty good after the riding the first hill and not getting dropped but that was the first hill and it was paved. On the first dirt climb I ended up in the back because these guys are great climbers, and they are fast! None-the-less, I was pleased with myself that I was keeping up. 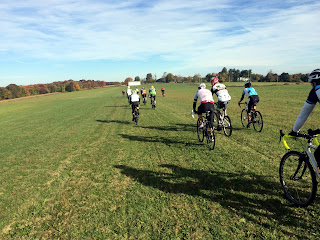 First Dirt on the route was on Old Roxbury Road and it's a steep climb, then it has a great descent and another climb to Bacon Rd. Across Bacon, we climbed up Grassy Hill which is also dirt. Grassy Hill goes through on paper but not for cars and probably only after all the leaves down. I thought I saw a trail but everyone detoured around it. 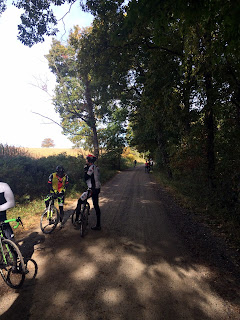 There was some new dirt on the route that I haven't ridden before but have ridden by some of these roads in the past. The most notable is the climbs up Bear Burrow Rd and Booth Rd. I actually saw people walking on Bear Burrow, which made me feel pretty good because I didn't have to walk. Granted, I might have been moving as fast as they were walking. 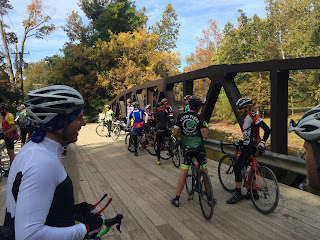 Then it was on to more known dirt roads like Moosehorn and Battleswamp in which I was able to stay middle of the peleton. 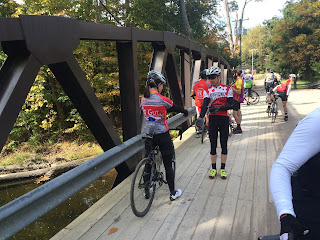 Stopping off at Judd's Bridge to regroup was helpful because the first signature climb of the TdR was coming up. 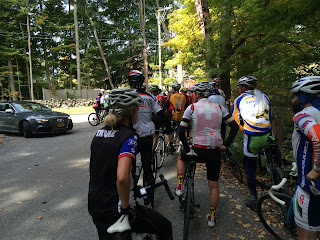 I have climbed Judd's Bridge many times and this time like all the others was no different. It was hard, I took it slow, and I made it, but I was also last. 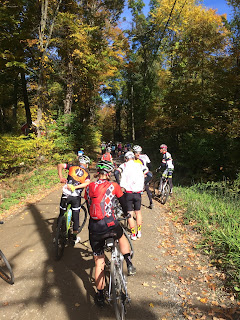 Then we descended down Hartwell and rode up Walker Brook. If you are going to ride dirt roads in Lower Litchfield County, you have to ride Walker Brook because it's a scenic and gradual dirt road ascent along cow pastures and streams.  I was able to hang with the peleton almost all the way to Route 199. After Walker Brook we swung around over to Hidden Valley but to get there we went down a dirt road called Buffum Road. Another dirt road that I have been eyeing but just never figured out how to work it into a ride. 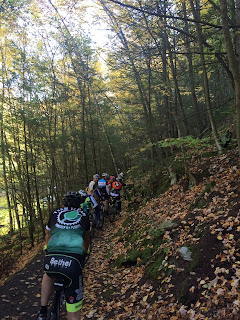 At Hidden Valley is where we encountered what was billed as Roadie Friendly Singletrack, which in reality was the continuation of the Shepaug Rail Trail through Steep Rock Reservation. There is a 100 yard section of some interesting terrain that unless you were accustomed to riding off road could be a little disconcerting to say the least.  There were a few flats through there that stretched out the group. 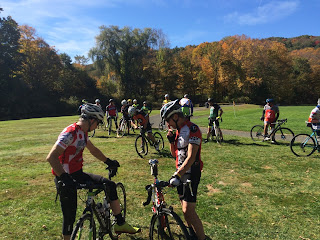 The old Shepaug Rail Line, comes out at the Rumsey School in Rumford, CT. 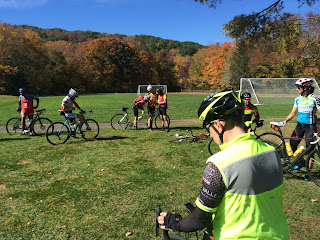 This was a good time to regroup and recharge for what was to come. At the library someone gave me a brownie cupcake, and I ate it here and it was sooooo good! 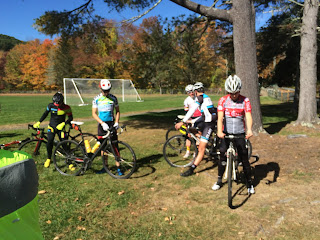 It was also time to shed some clothes and get ready for the next signature climb of the ride. 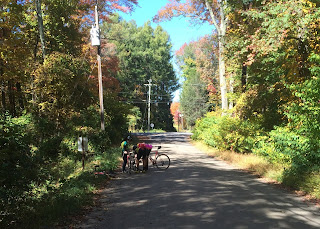 The route then headed towards Bethlehem and a lot of new dirt roads that I know about but just haven't figured out a good route to connect them yet. We rode Shearer and Dark Entry and eventually to the next big climb of the ride. Calhoun Hill is marked on my Tri-State Gravle Map but like most of the dirt roads that I know about on this side of Washington I still haven't ridden yet. 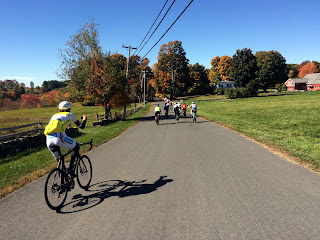 There was a pre-ride a few weeks ago that included Calhoun Hill and everyone was in awe of it. I rode it but it was slow and painful!  It starts with a gradual, steep climb of about 8% but then goes to 12% around a corner, then planes out for a couple of yards so you can catch your breath and then you hit a wall with a 15% grade!  The only solace is the wall is paved! 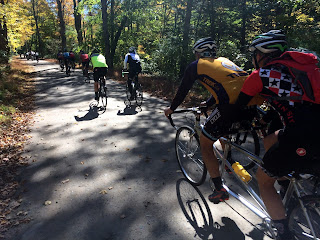 Then it was cut back towards Washington and the Gunnery School, where we rode up Ferry Bridge, another steep but short dirt road, and then down into Steep Rock Reservation on an old right of way that I have been wanting to ride for quite some time, as well. I missed a turn and followed a more gradual route (dual track trail) into Steep Rock that wasn't on the topo. By this point most people were out of water and there was no water stop, but I planned ahead and had a bottle of Powerade in my frame pack. 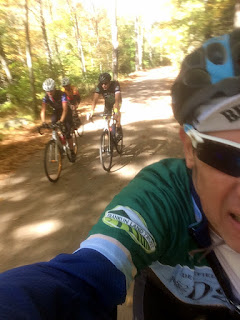 Riding through the tunnel is something that you have to experience.  You enter it and it's pitch black and then shortly there after, you see the proverbial light at the end of the tunnel and you just glide out the other end.  At the south portal of the tunnel, we took a group photo. 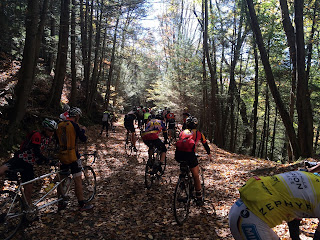 In the interest of time and the fact that the Roxbury Market closed at 3 PM everyone made a bee line back to where the cars were parked. 5 more miles and then it was time for blessed relief and in my case, an ice cold PBR! 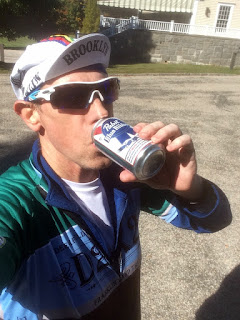 What a great ride on such a beautiful day!