I won an eBay auction for a Vintage Cannondale (B017) Casey Handlebar bag.  I have been looking for one for quite some time.  Found a few on Craigslist but the sellers never got back to me and I had been trolling eBay for a couple of months and made a few bids only to some of the auctions exceed the amount I was willing to pay.

This yellow one popped up one day in early February and it was perfect for the Bianchi so I put in my max bid of $32.00 and crossed my fingers.  As you can see I ended up paying $31.00 and if you adjust the original amount for this bag for inflation since 1982, it would cost $48 so I actually saved money, from a purchasing stand point.  However, when I got the item the first thing I realized is that the bag's support frame isn't going to fit on a modern stem and 31.8mm handlebars.  DOH! 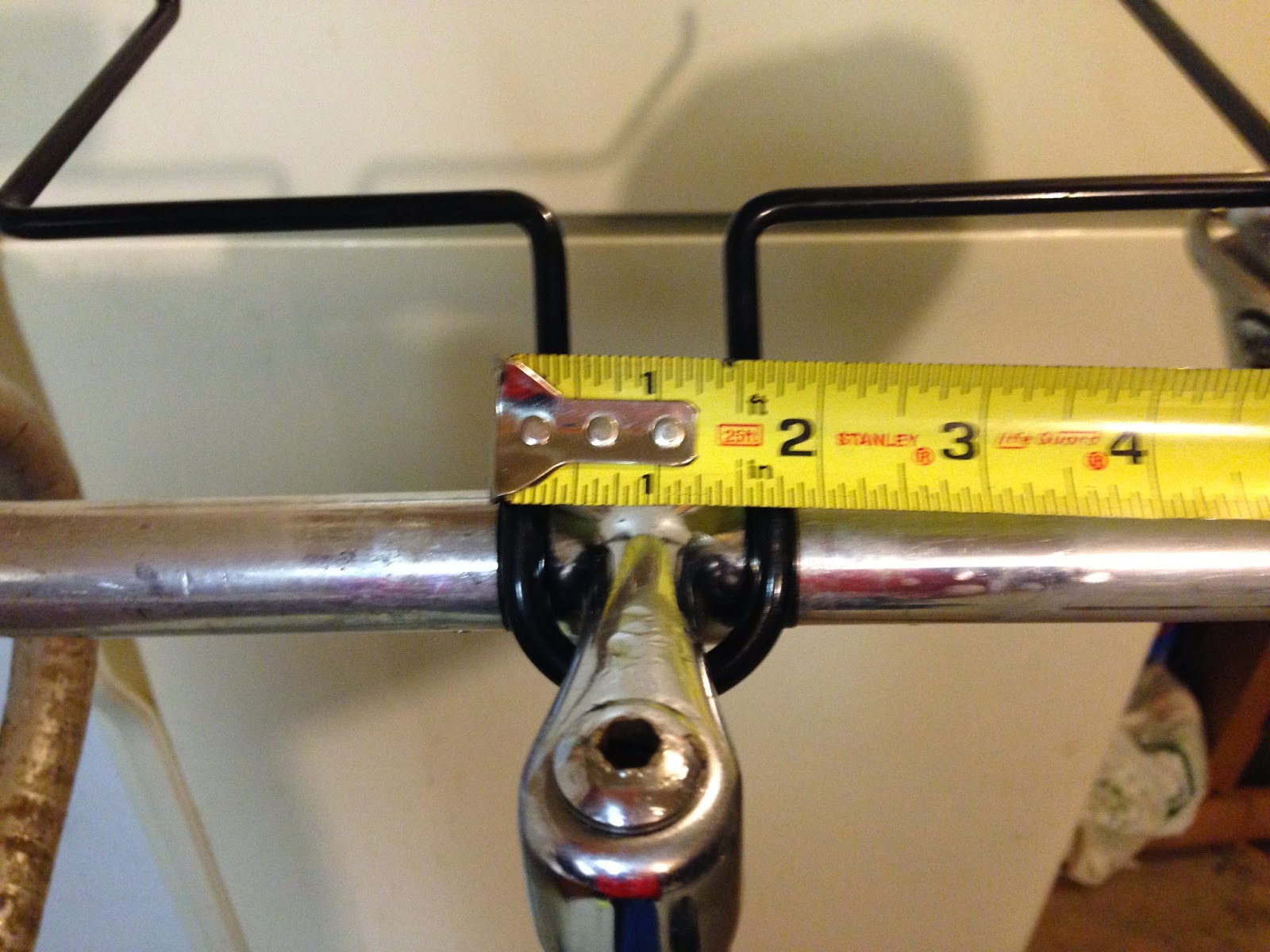 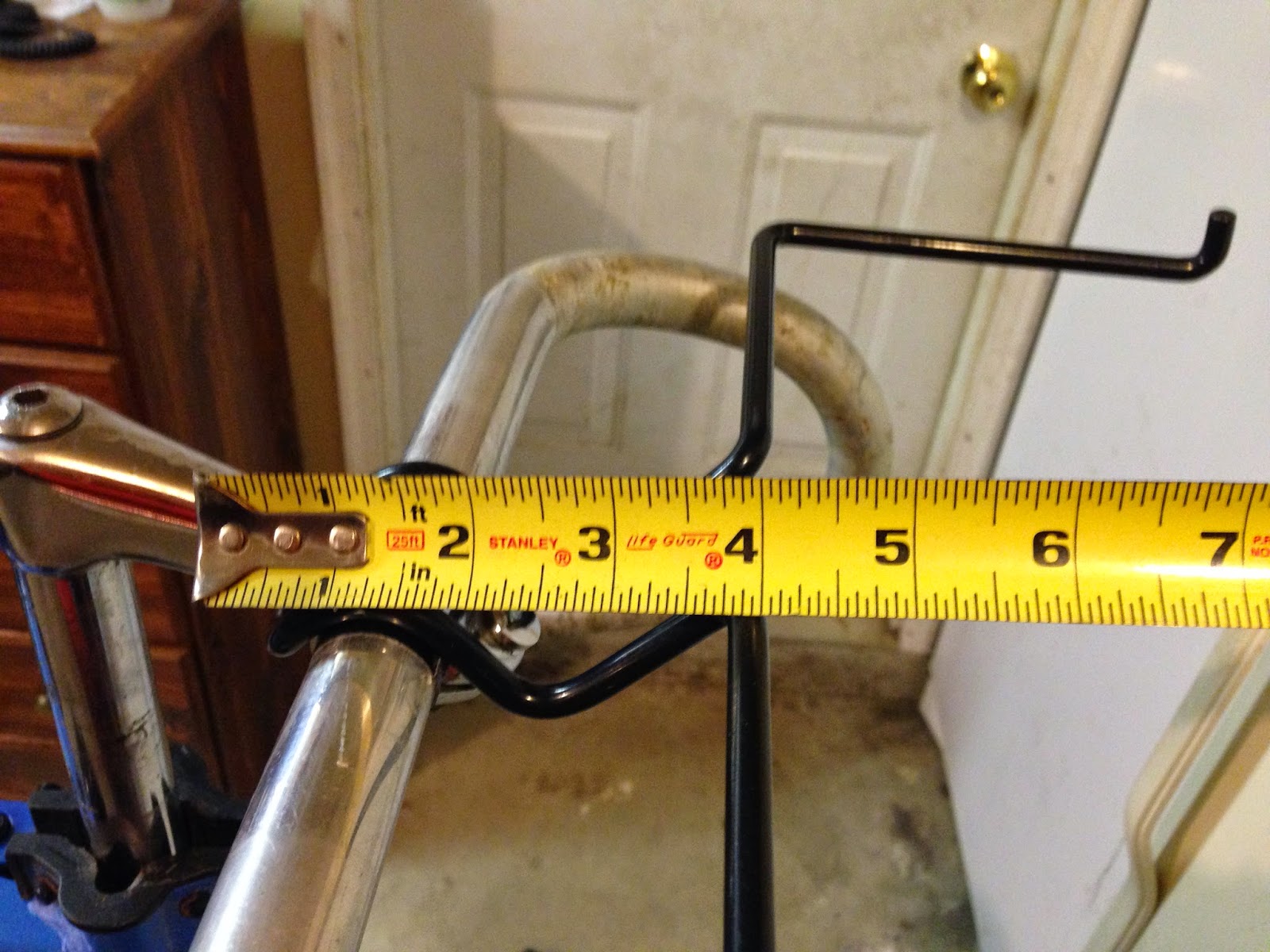 My first thought was to go out and see if I could find some sort of thin metal bar and bend a bracket using pliers and my vice but I never got that far because I stopped in at the Bicycle Center and asked Shawn if he knew any metal workers figuring he might have had to use one in the past to have a metal frame welded.  Shawn recommended that I call this guy Austin who lives in Bridgewater and owns a company called Wolfpit Iron. 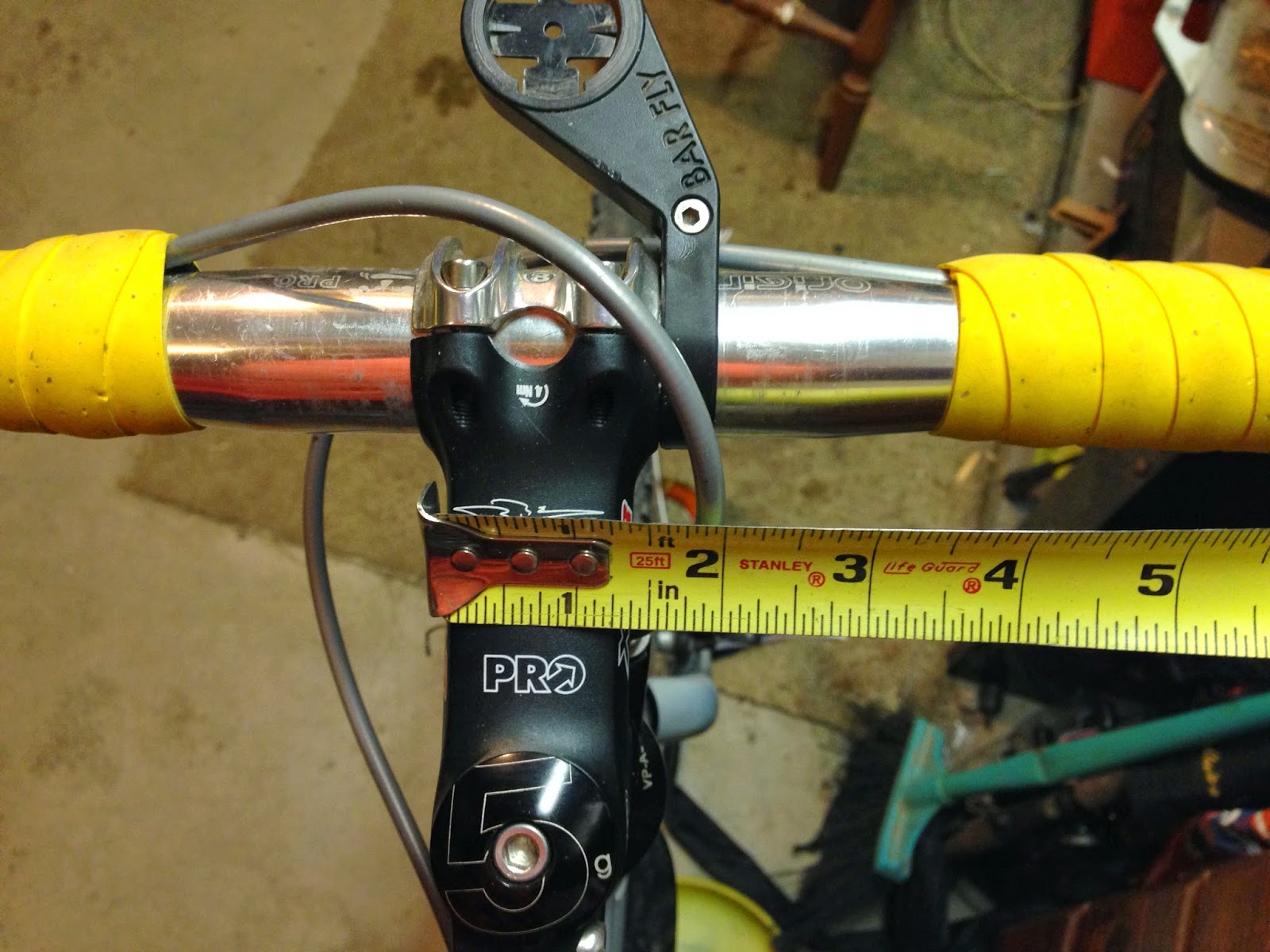 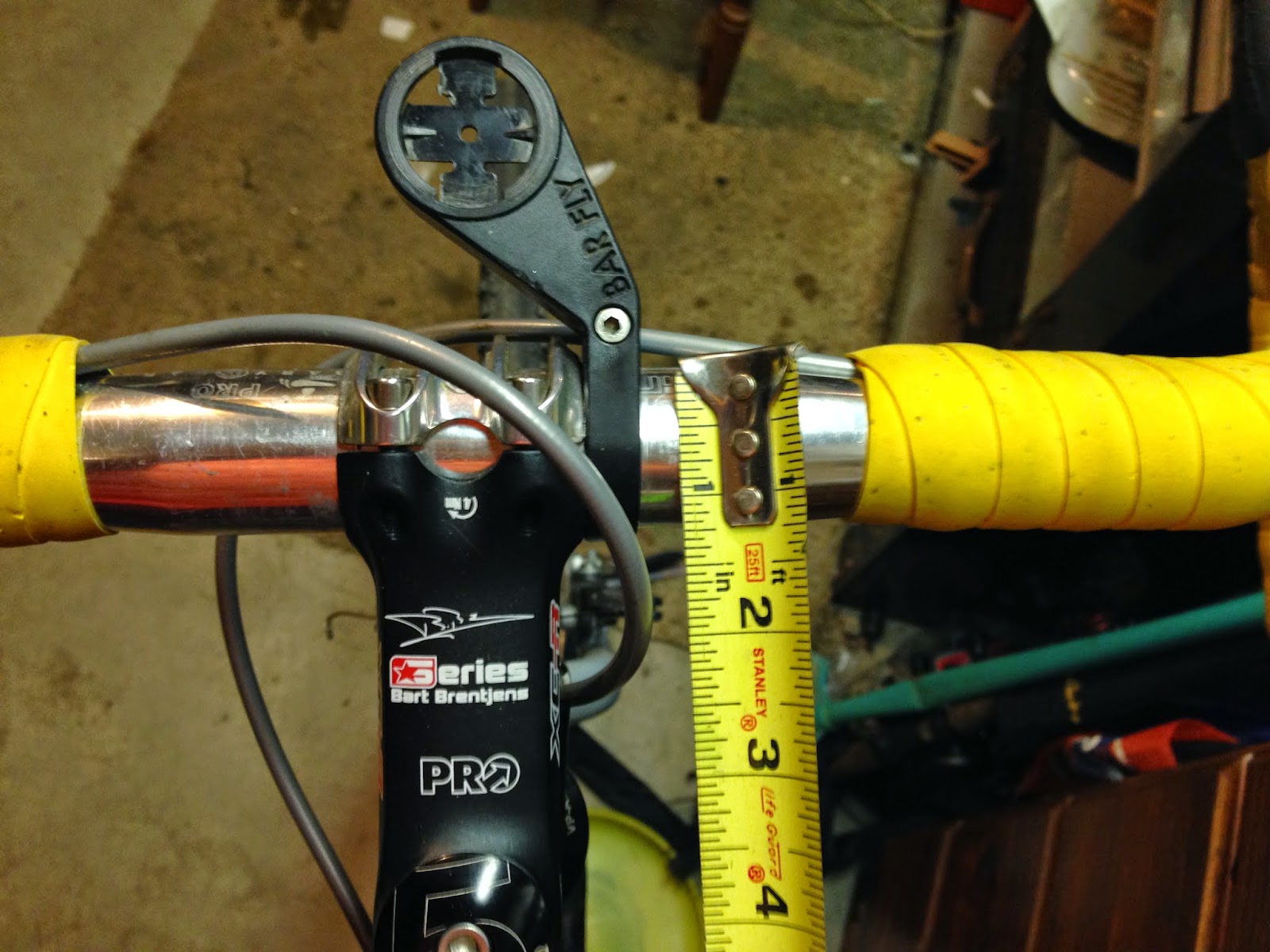 After explaining to Austin what I wanted to do and sent Austin a bunch of pictures.  As you can see in the top left picture the original frame is about an inch and a half and a modern stem is almost two inches wide where it clamps onto the bar.  The other issue I wanted to accommodate is where my GPS is mounted.  I asked Austin if he elongate the bracket from where it leaves the bars to connecting with the bag so I could keep my GPS mount on the bars as such.  He got back to me with a price and I said go for it. 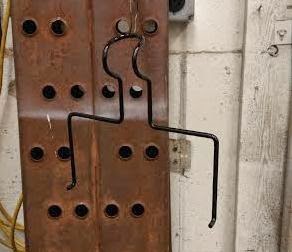 I met Austin for coffee about week later and dropped off the original bracket on a stem with bars so that he had something to model off of.  He sent me this picture of the new bracket while epoxy coating was still drying. 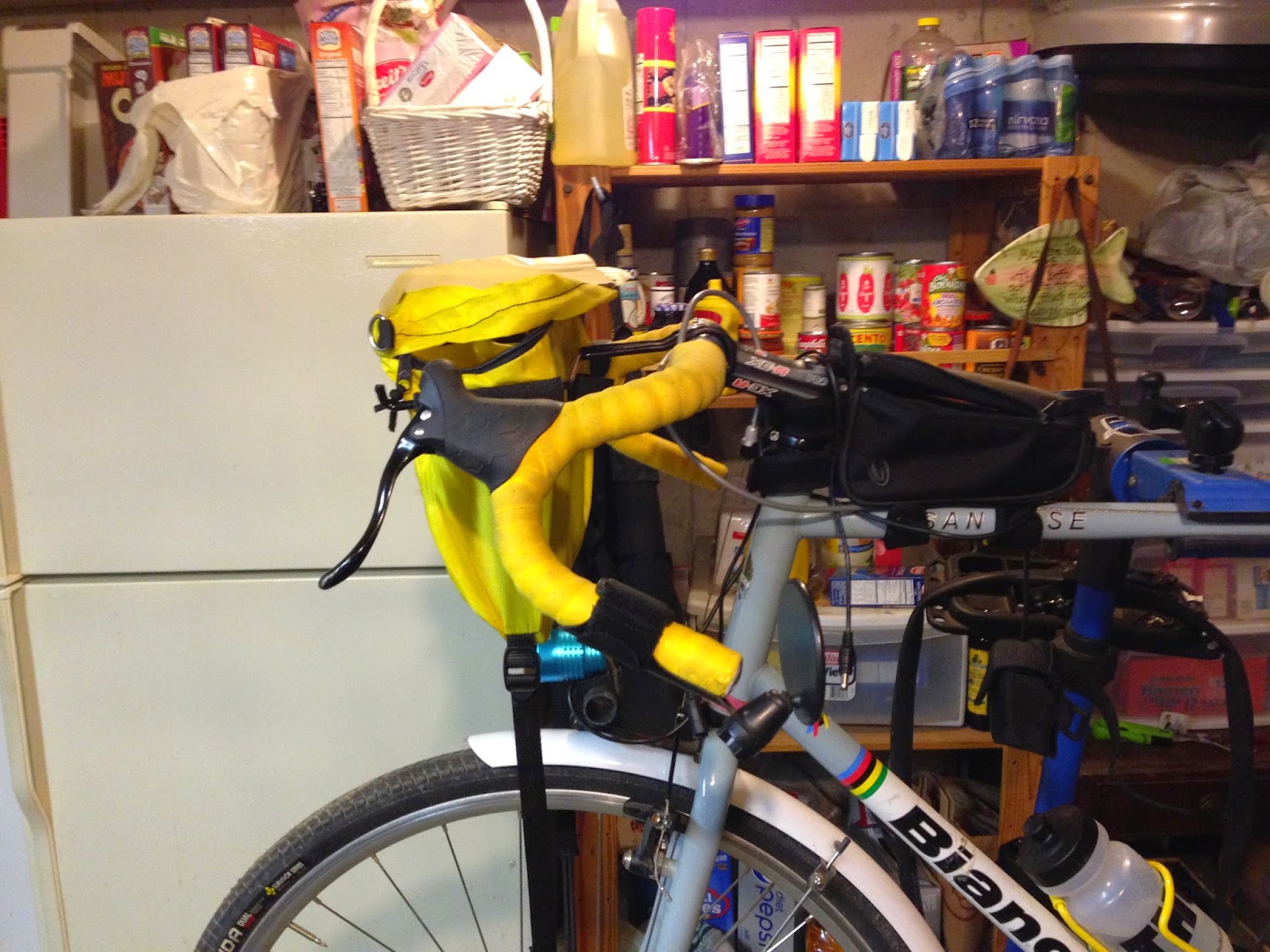 I picked up the bracket the following week and had a do a little bending in my vice.  Initially it stat at about a 45 degree angle off the stem but after a few bending sessions I got it perfect! 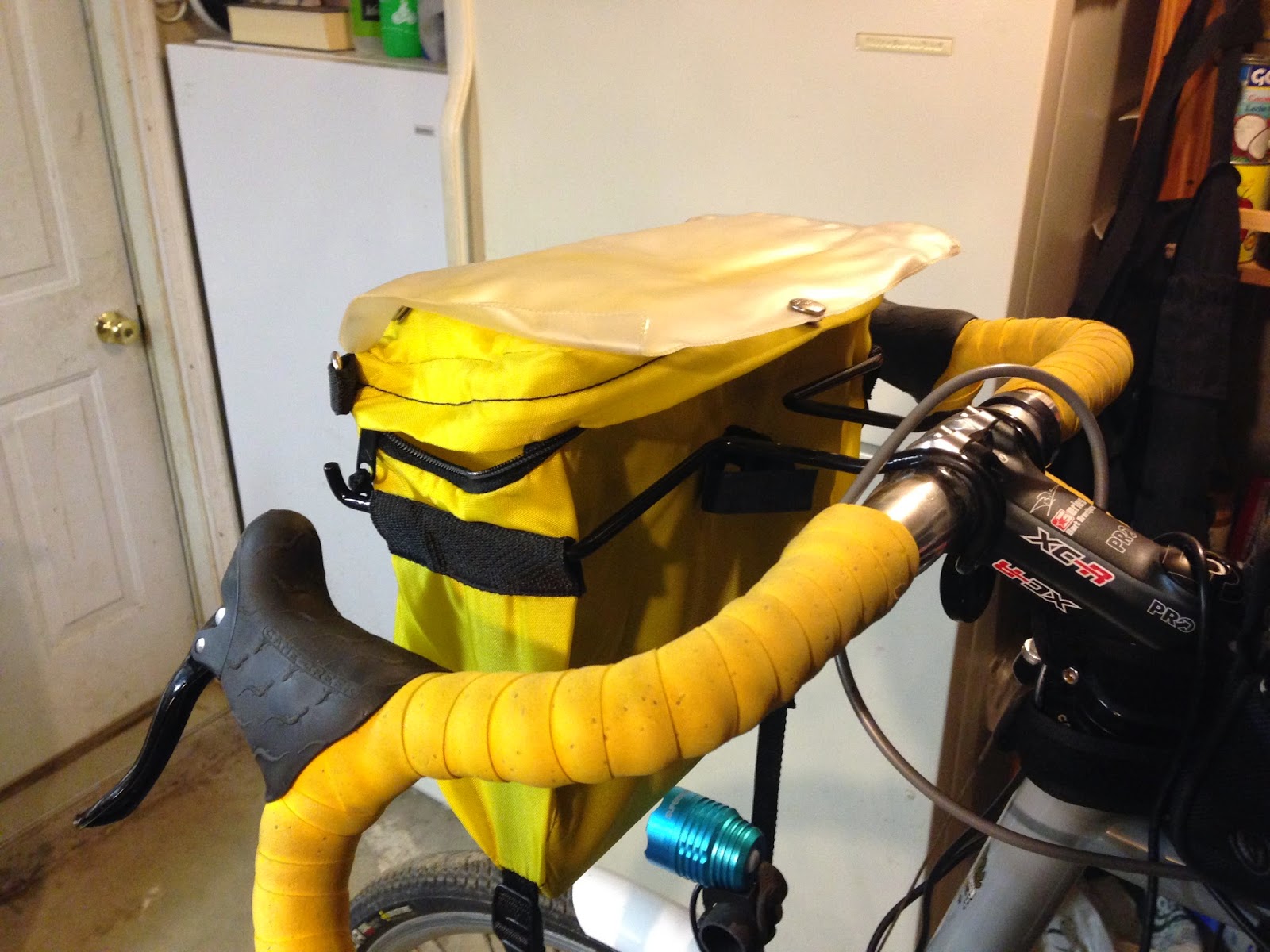 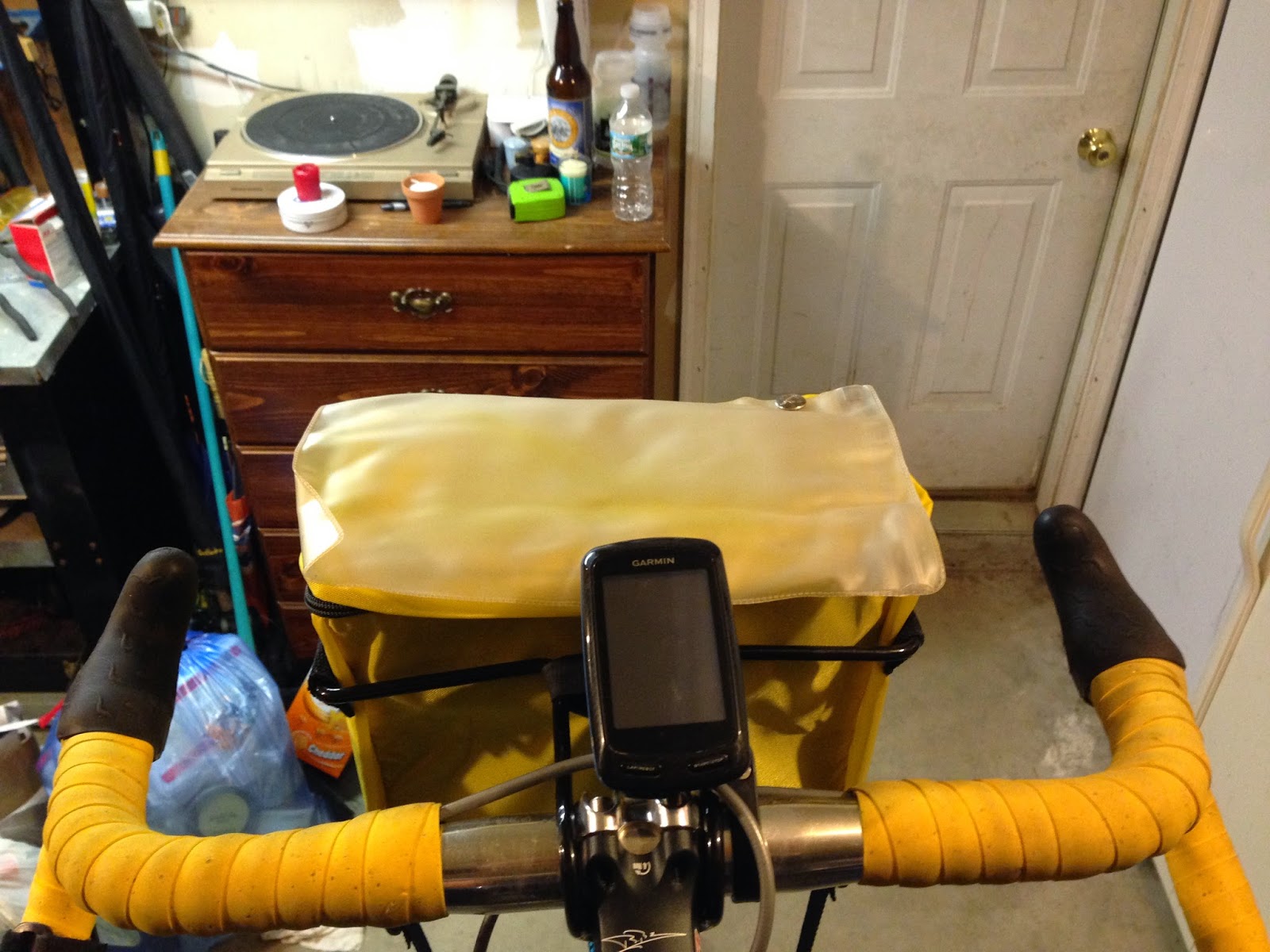 It sits far enough away from the bars so that it doesn't conflict with my Garmin!  I took the bike out for a test right and I couldn't even tell it was there. 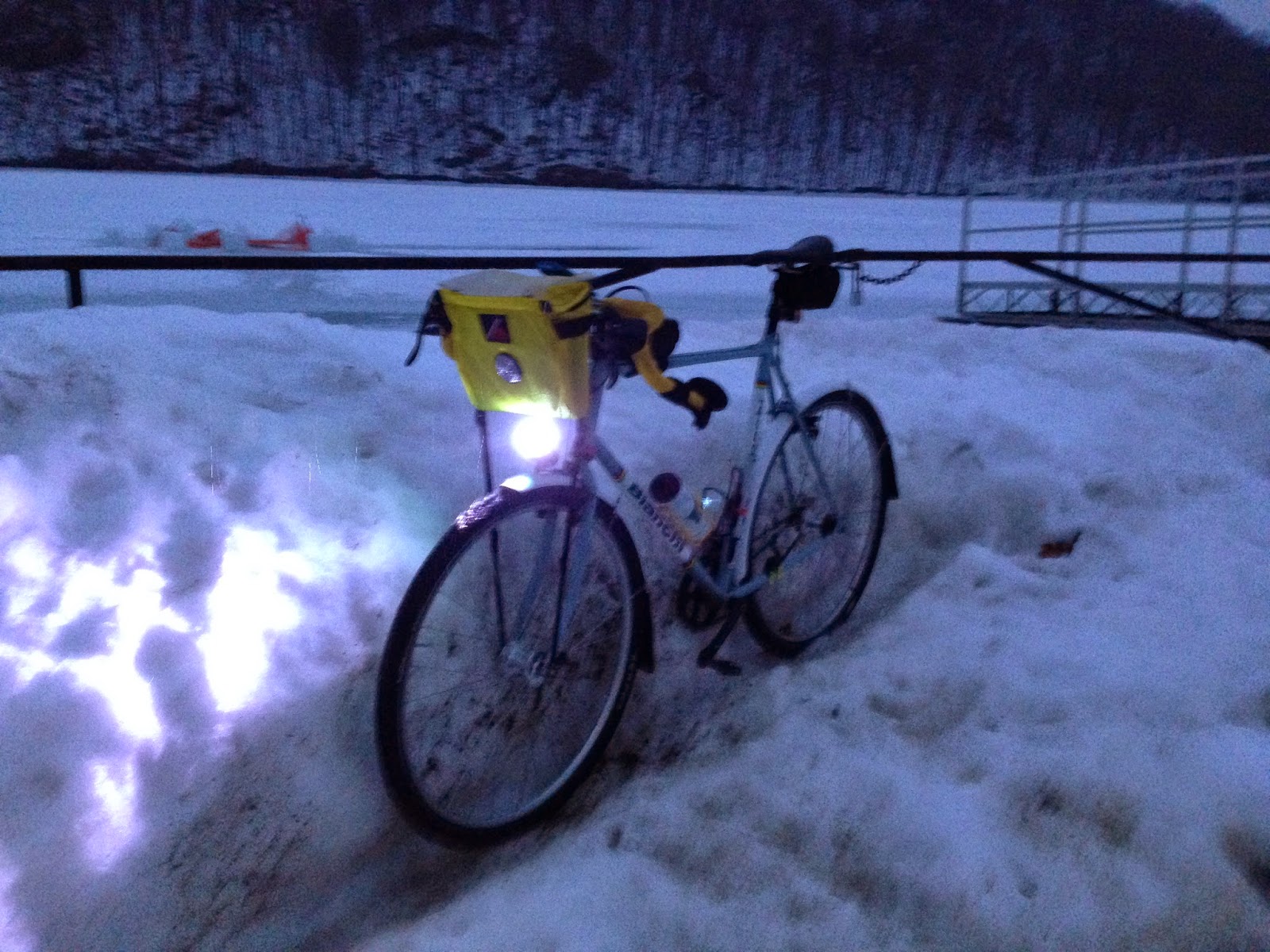 It was raining but I headed down to the lake for a quick test ride and I couldn't believe how nice the new bag is.  Couldn't tell it was there.  The Sefas Vida tires are really rocking on this bike. 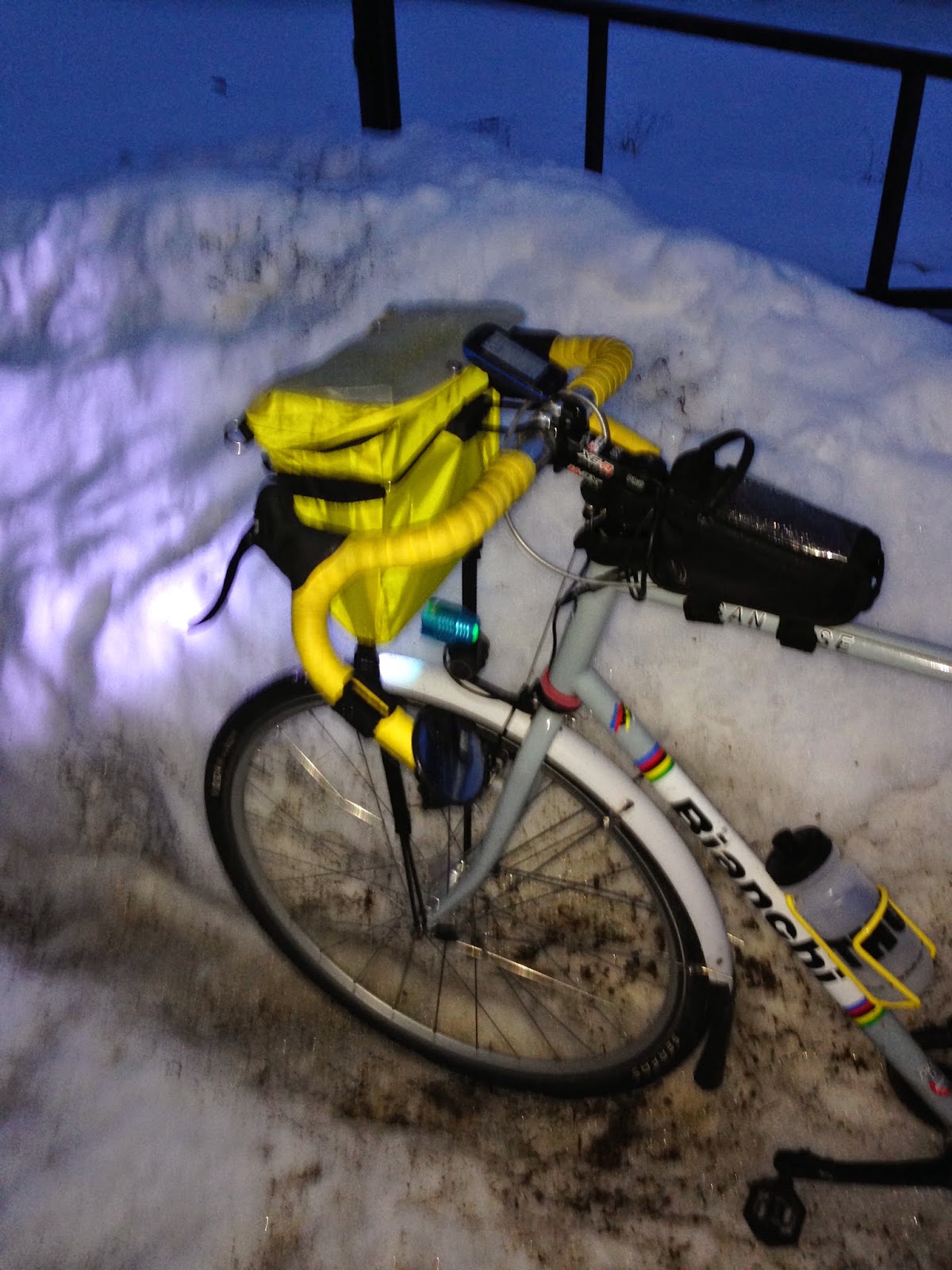 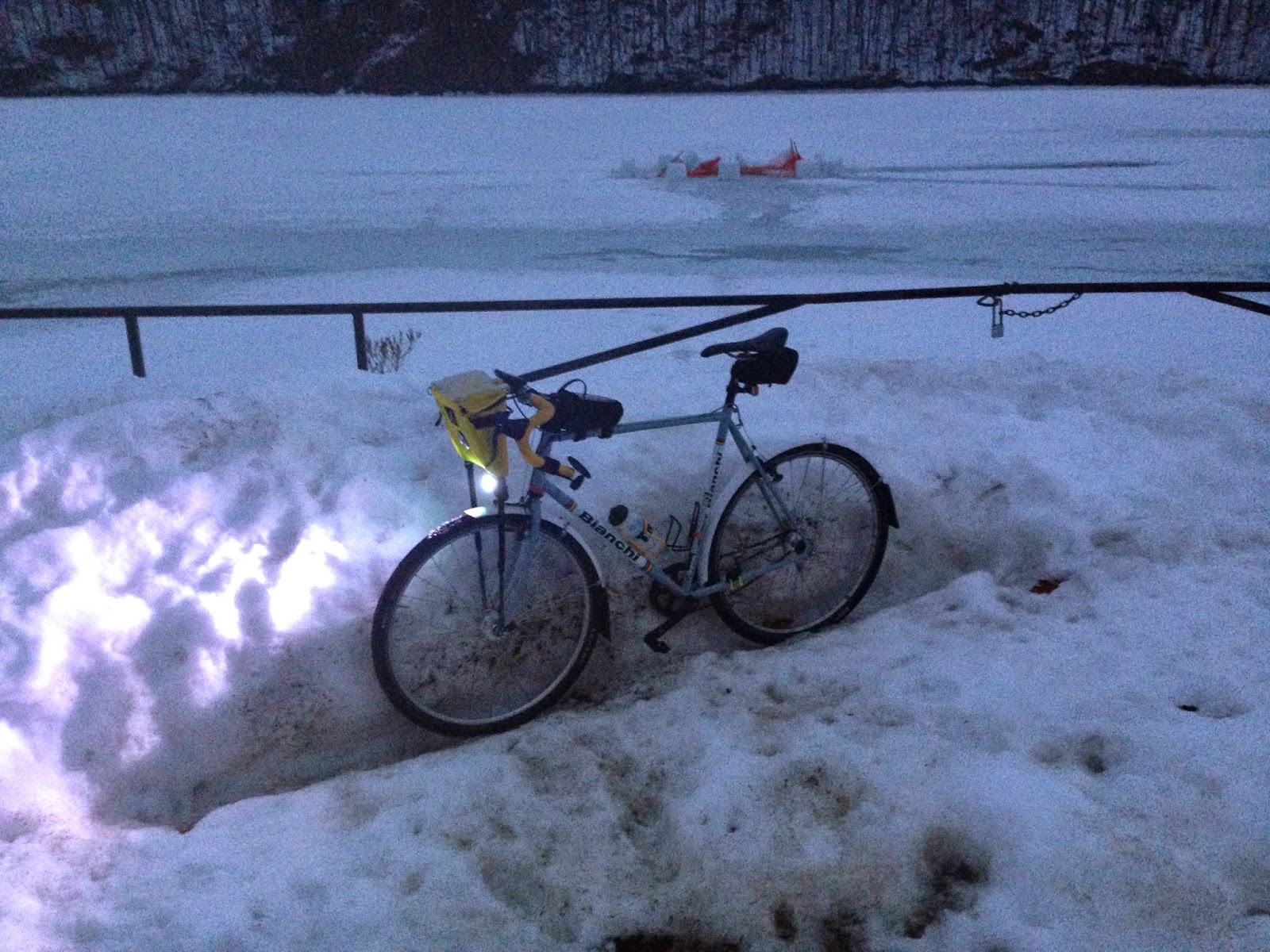 I have the same issue. Would you mind sharing the Wolf Pit contact info? thanks

I reached out to Wolf Pit Iron works last year and he said he was no longer doing that kind of work. Personally, I don't think he wants to do one off work, like this.

When I was a wee lad I made a similar bag from a kit in a home ec. class. It came with that same bar (the one for the old school handlebars). At some point I lost the bar, still have the bag. That bag was pretty handy when I was younger. Still bummed I lost the bar, but I guess it's just nostalgic at this point since I'll likely never use it again.