This was a great week for bike commuting.  Weather stayed warm in the mornings and afternoon temps were perfect, now if my equipment lived up to what it was supposed to do it would have been a great week! 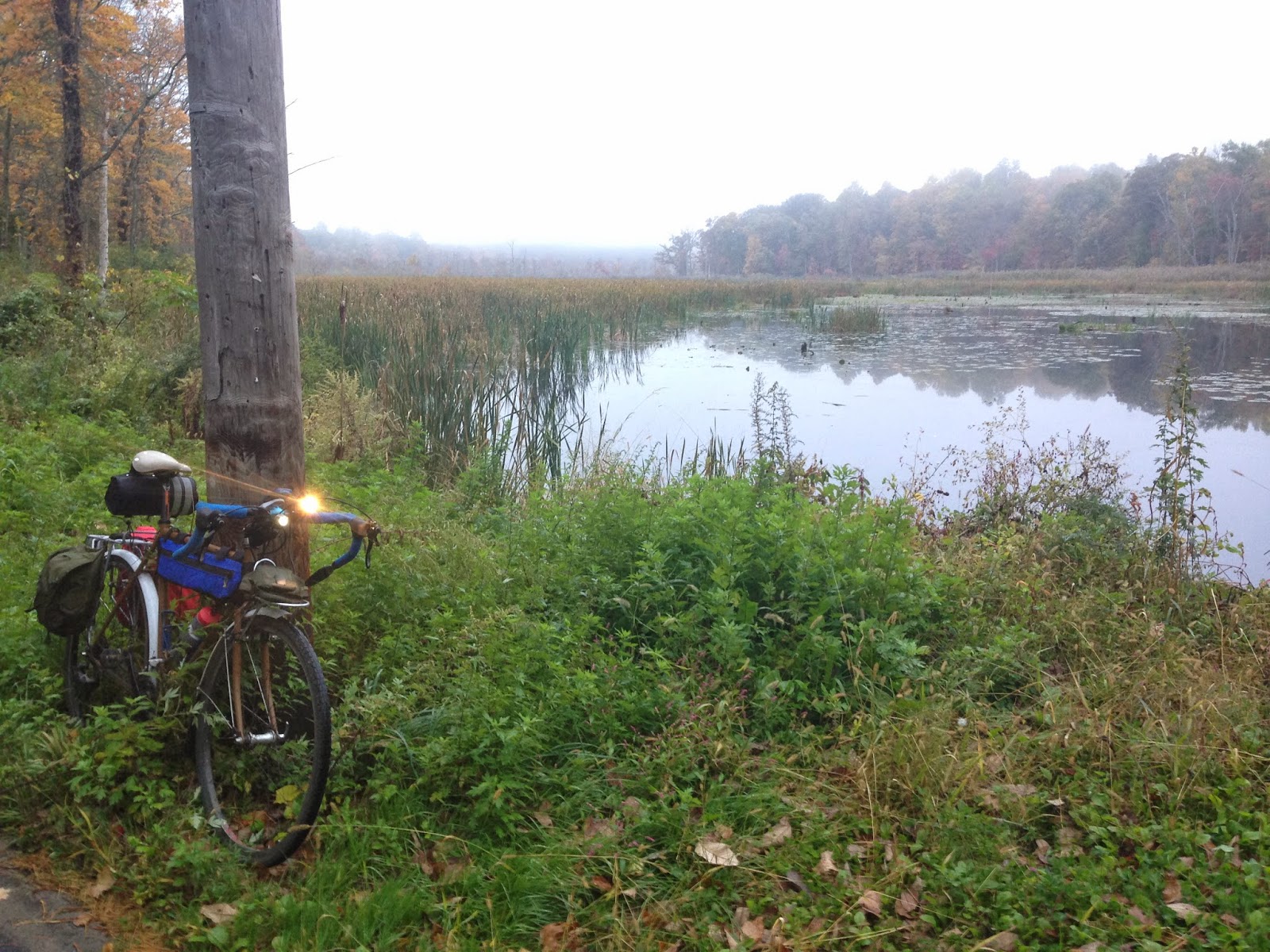 Tuesday's forecast was for some really warm weather in October, no less.  I headed out quite early with lights for my first morning darkness commute on the Randomuter.  I left early enough to try a new 20 mile route that didn't include Castle Hill but rather Boggs Hill, which isn't as climby as the prior hill so I figured I would make better time. 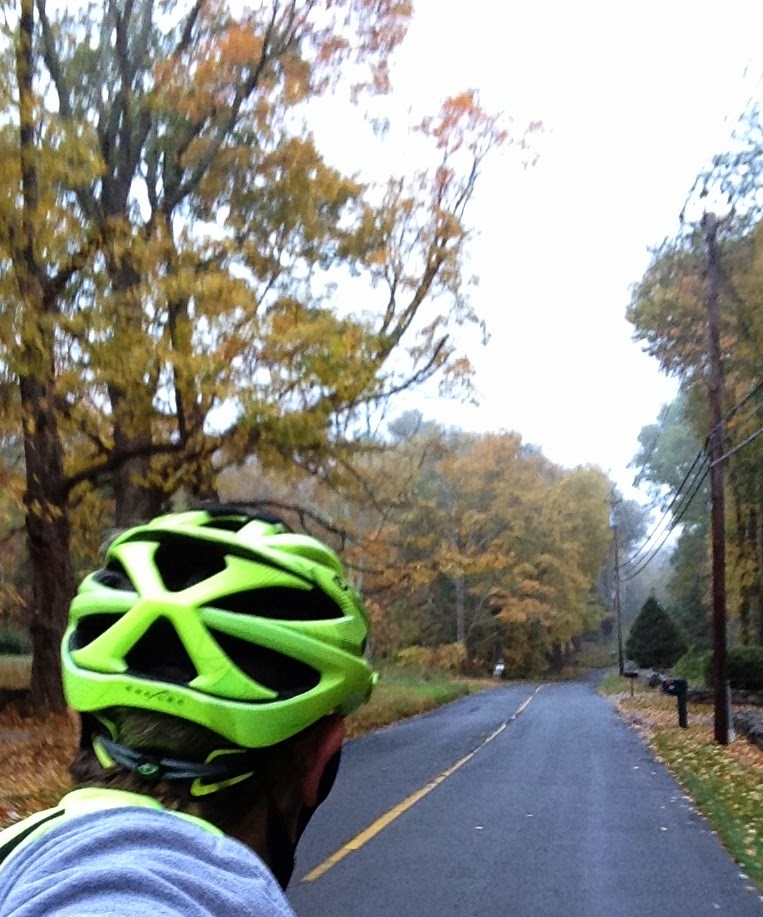 Fall foliage on Boggs Hill was resplendent and the misty air and wet ground sure made it feel like fall but the only thing missing was the cold.  Global Warming, I guess. 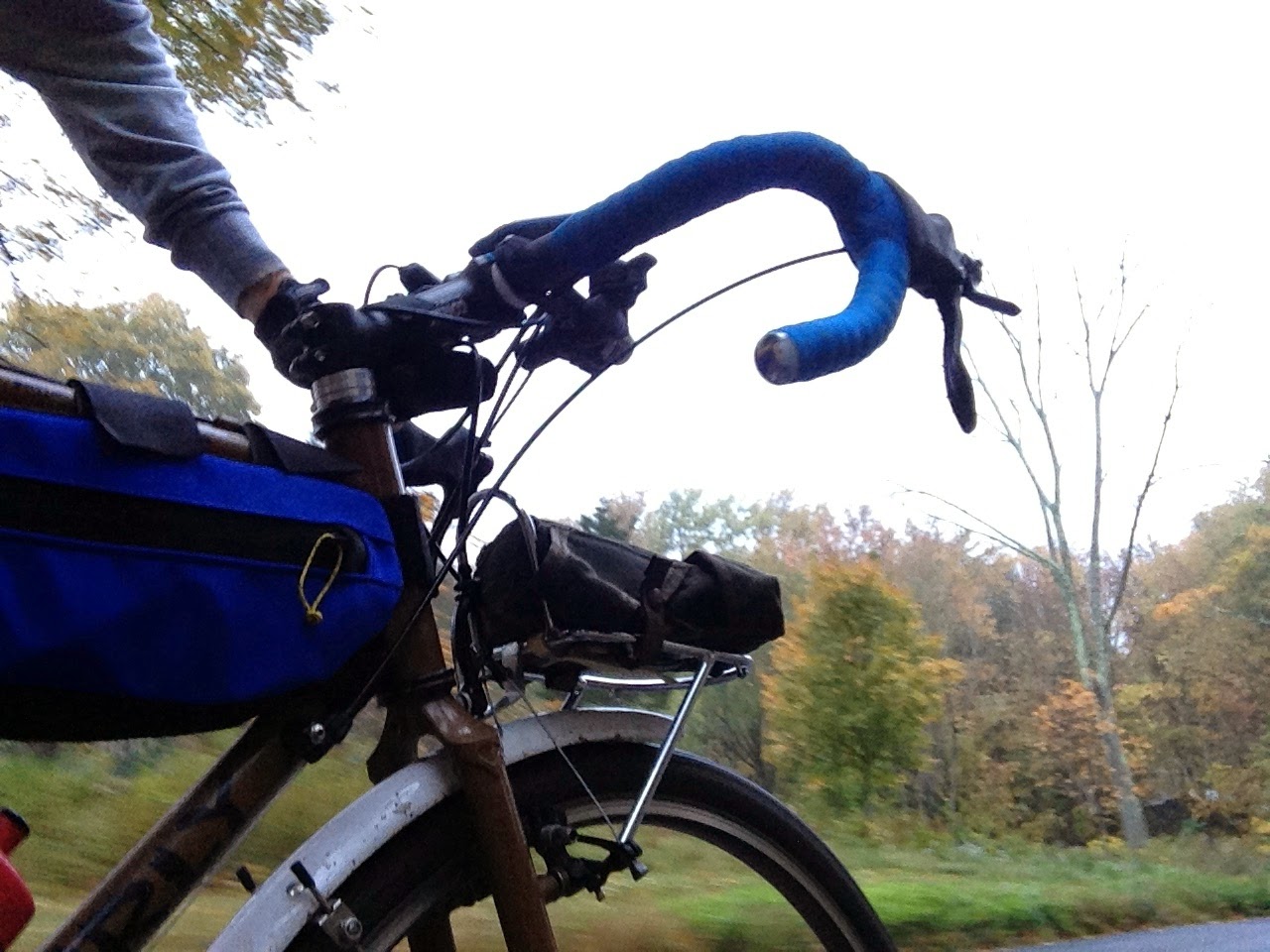 I still haven't found the optimal way to carry my headlight battery so this morning I put it into an ammo pouch and attached it to the front rack.  Wasn't the most effective attachment but it did the trick. 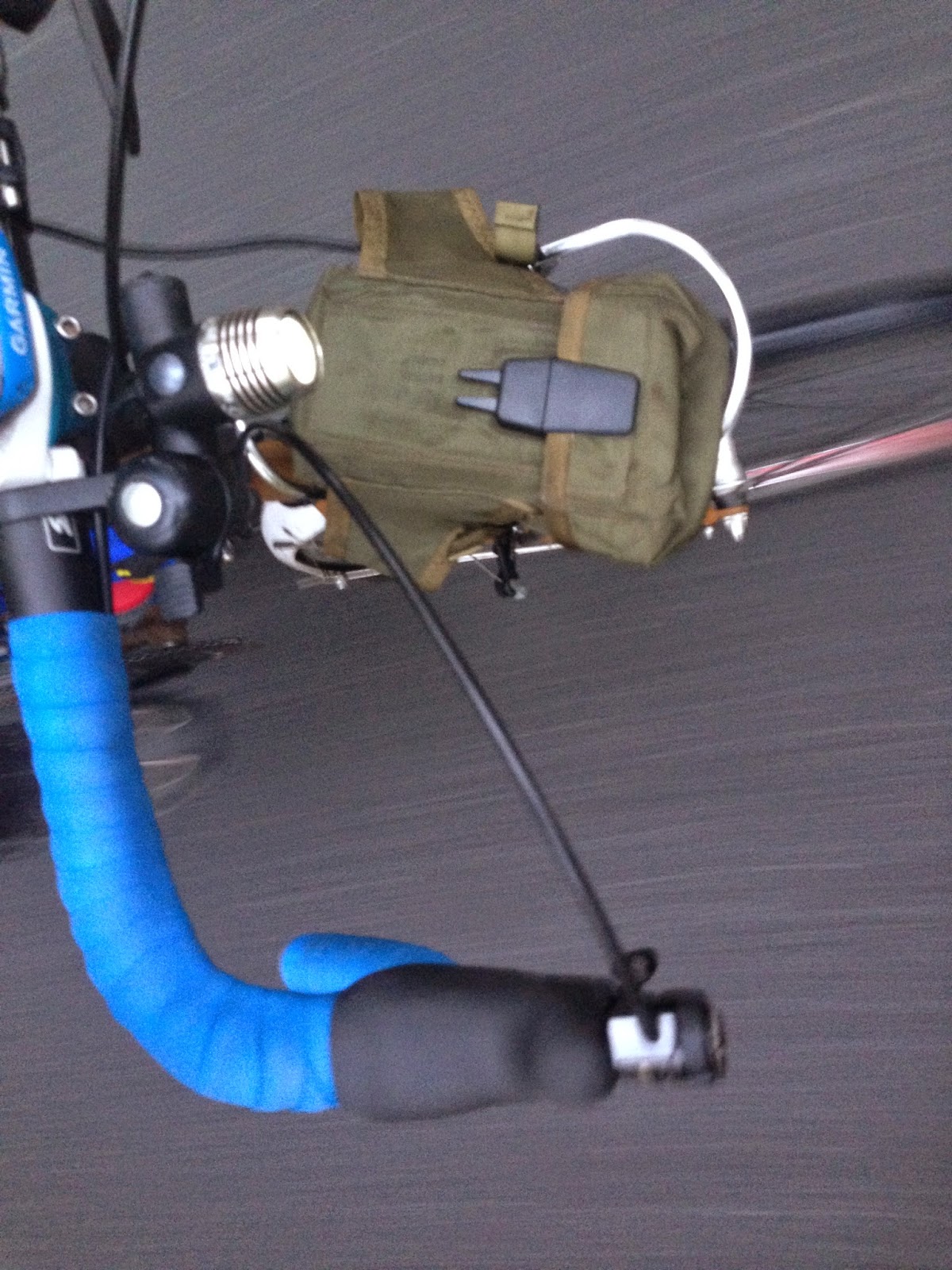 What I need is a good Rando Bag but I haven't found one yet.  I haven't decided whether to get the classical type you see all the hardcore rando guys riding with or go with something more modern. 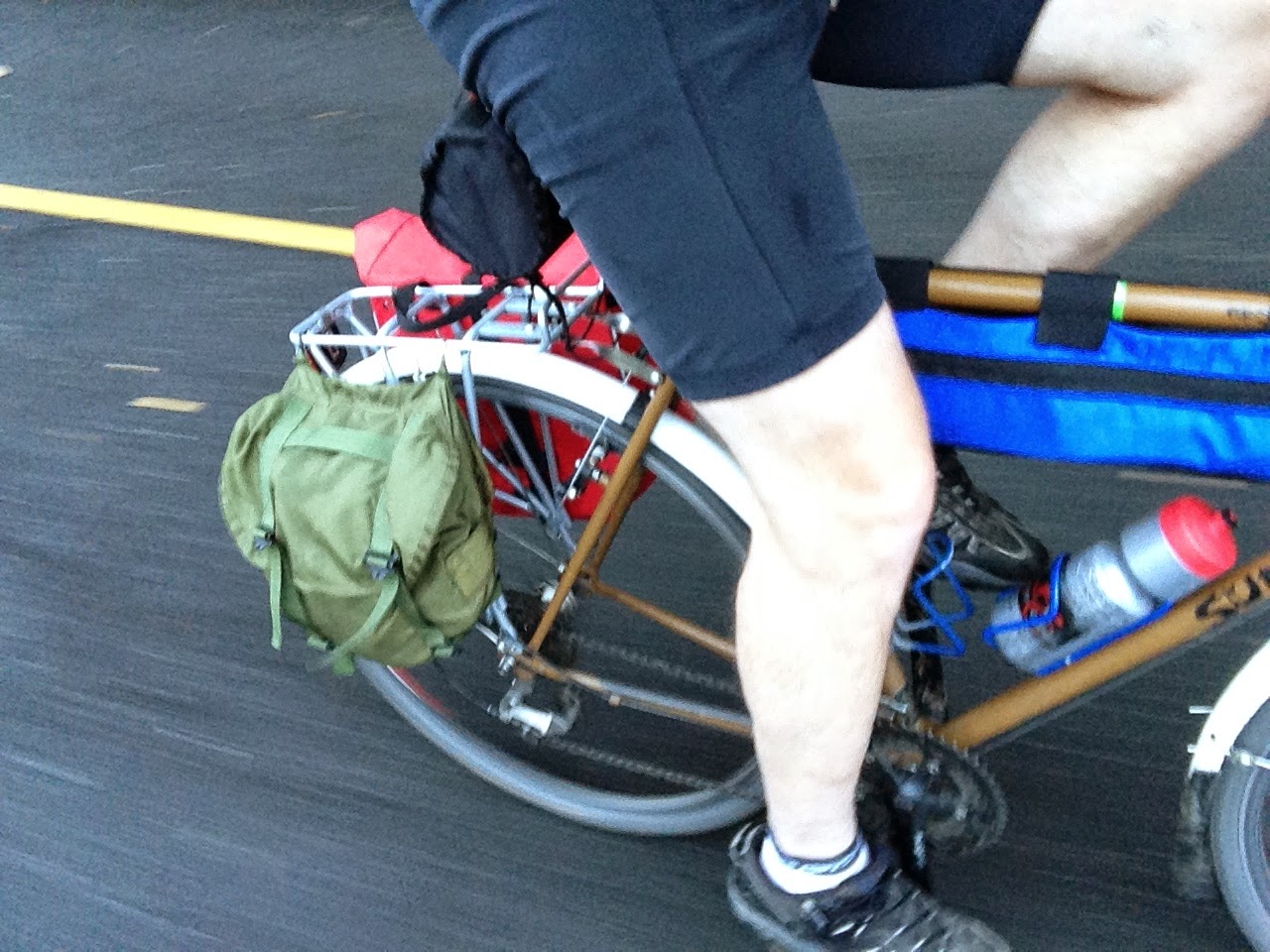 In the mean time my US Army Butt Pack works great as a saddlebag/pannier for carrying my lunch and my Banjo Brothers waterproof pannier works great, too, and as long as it's not raining out, I can carry my engineering laptop in it. 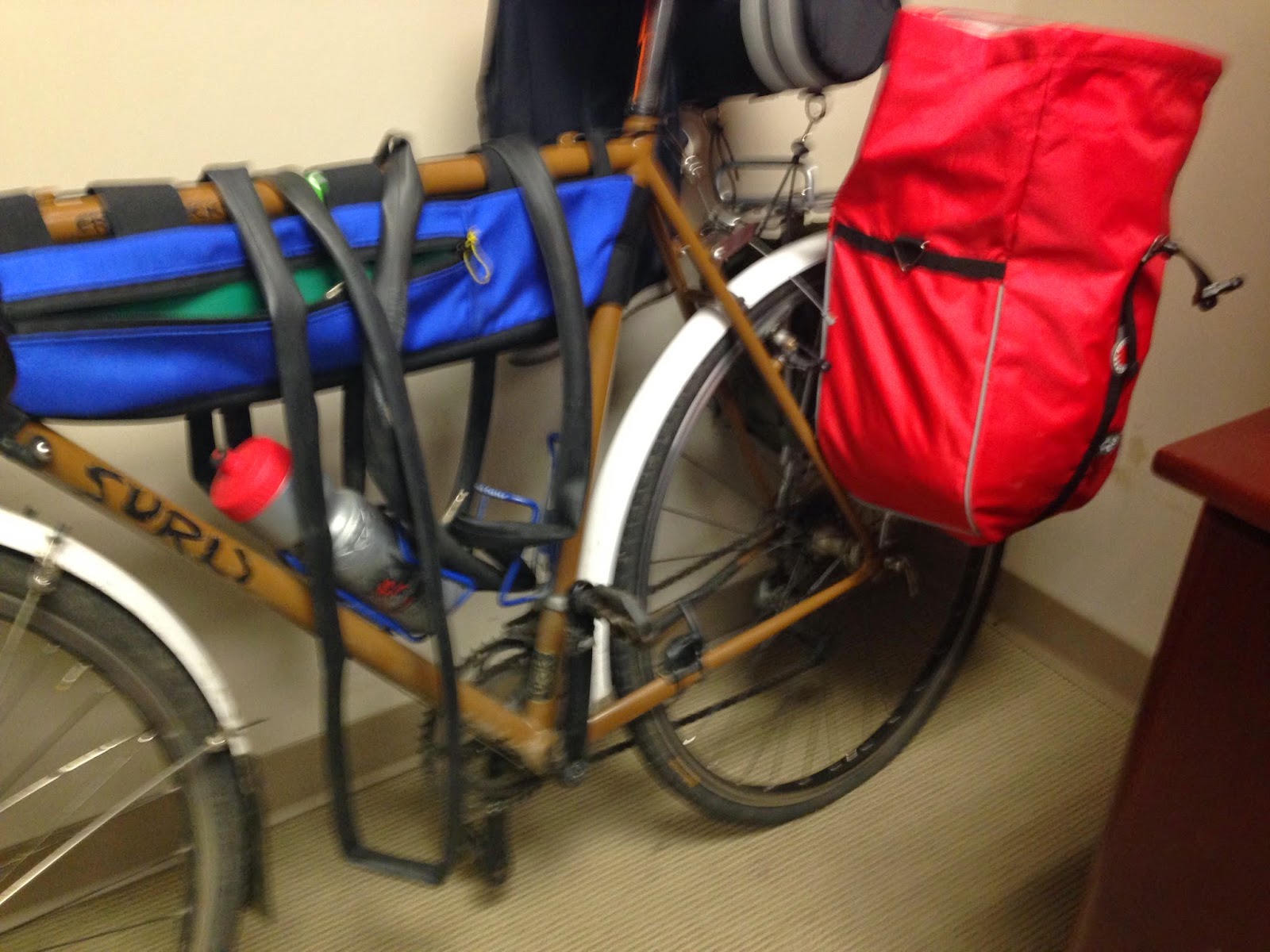 As I was riding through the backside of the office park this morning is when disaster struck.  At the second speed bump a hissing sound started and I new right away I punctured the tire.  As I was just starting to change the tube, a friend of mine from the office stopped and offered me a lift in his pickup truck to the office so I could change the tube there instead of on the side of ride.  Once at the office I proceeded to change the tube only to find out that both my spare tubes were also no good!  I couldn't believe this and what's incredible is that I had ridden 3, 100+ Gravel Grinders and two 60 mile gravel grinders since my last puncture with these two bad tubes.  If I had a flat during one of those rides I would have been F#cked! 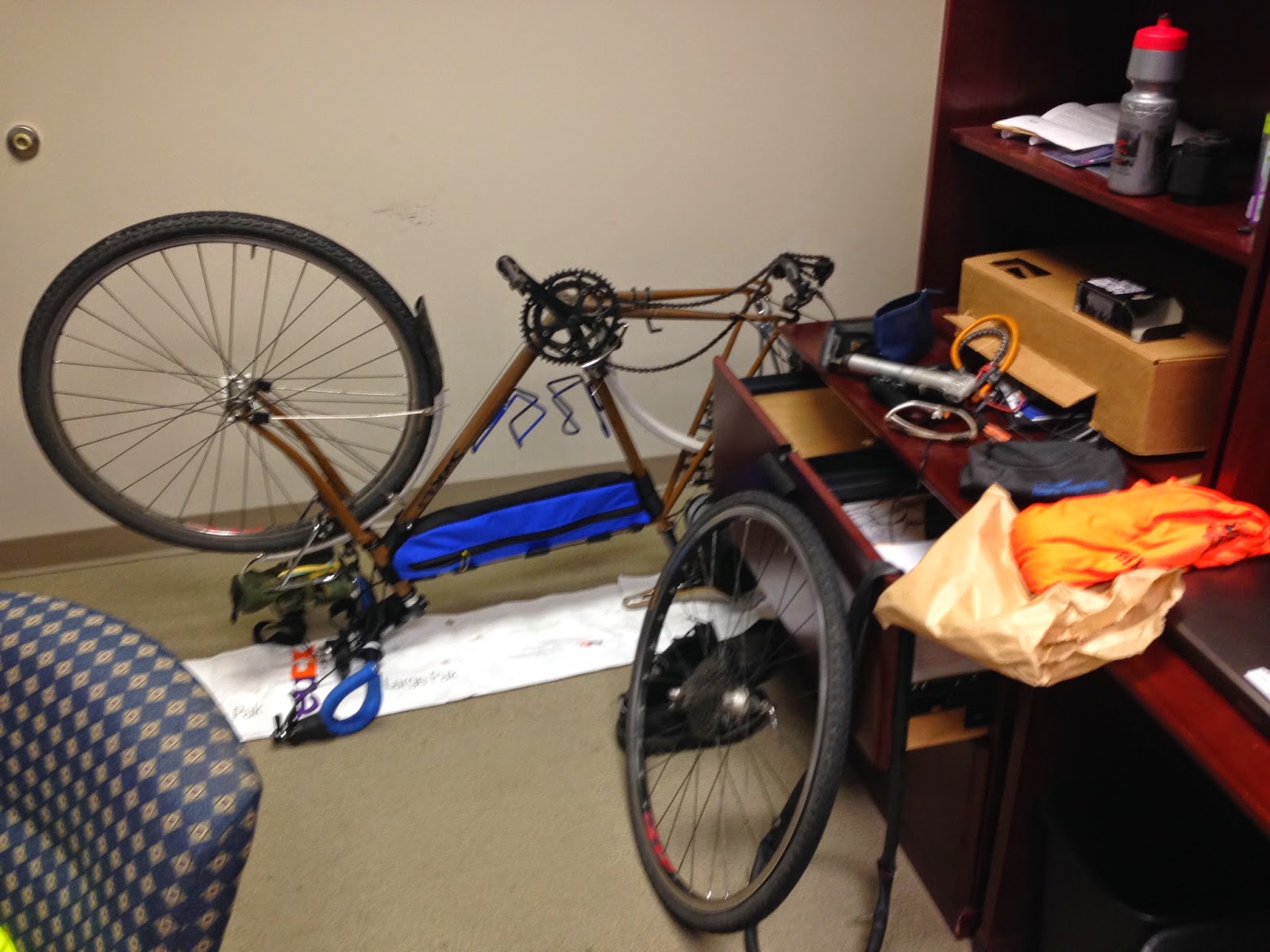 After getting changed for work I get call from my father asking me about where to park in New Milford in order to ride the New Milford River Trail.  I ask him if we wouldn't mind stopping off at a bike shop on his way up here and pick up a few tubes for me.  He dropped them off and when it was time to head home, I changed the tube, in my office, and headed back home. 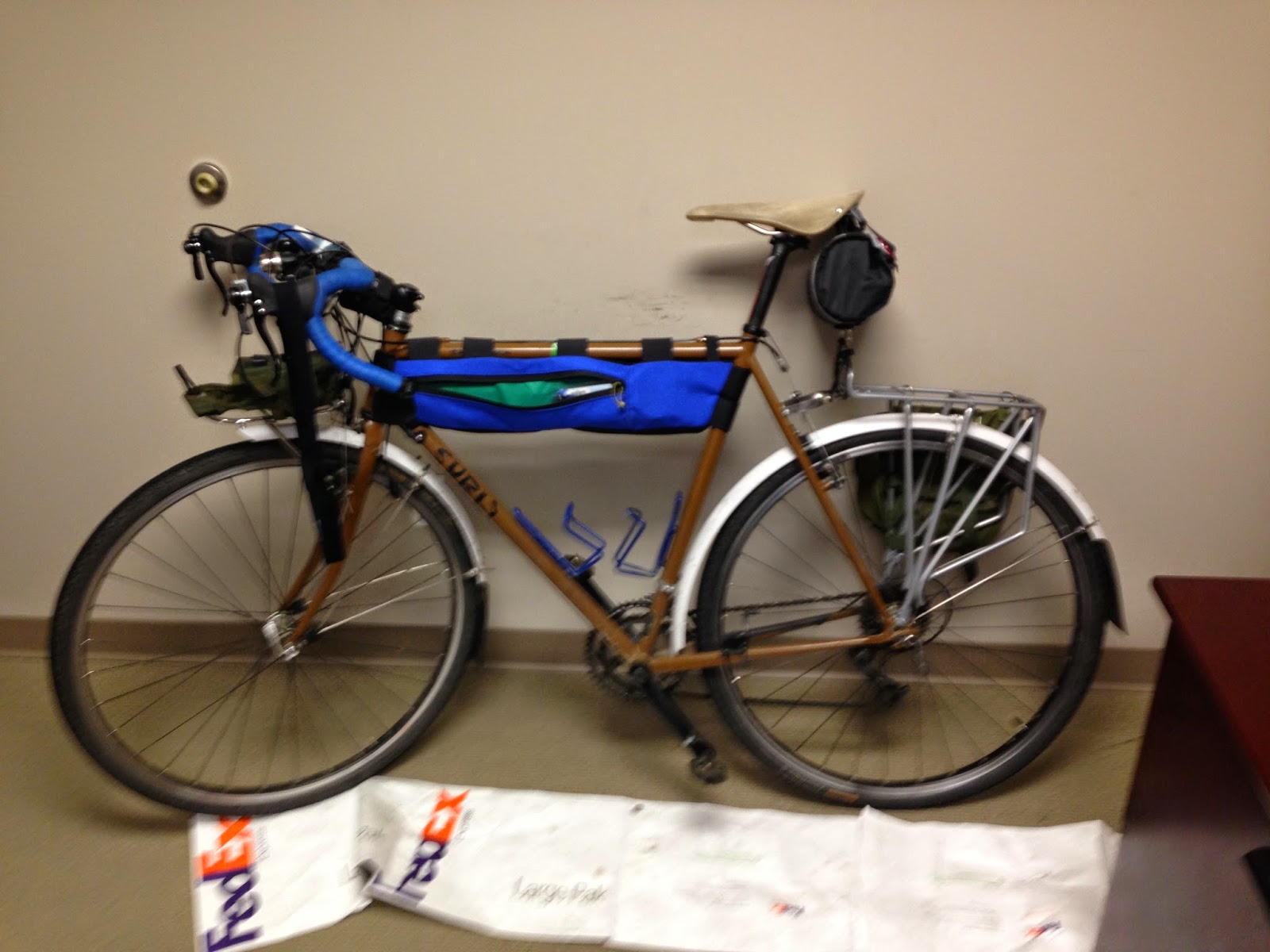 I wasn't halfway up the hill from my office when I realized I was losing air again.  I walked back to the office and called my wife for a pick up.  I figured out later that night that the Kevlar mesh on the inside of the Continental Tour Ride Tires that I am using that provides the puncture resistance caused the secondary failure because the fibers from the Kevlar must felt sharp at the puncture point and must have punctured the new tube when it started taking my weight while riding.  I put a patch in the tire and let it sit a couple of days before trying it out. 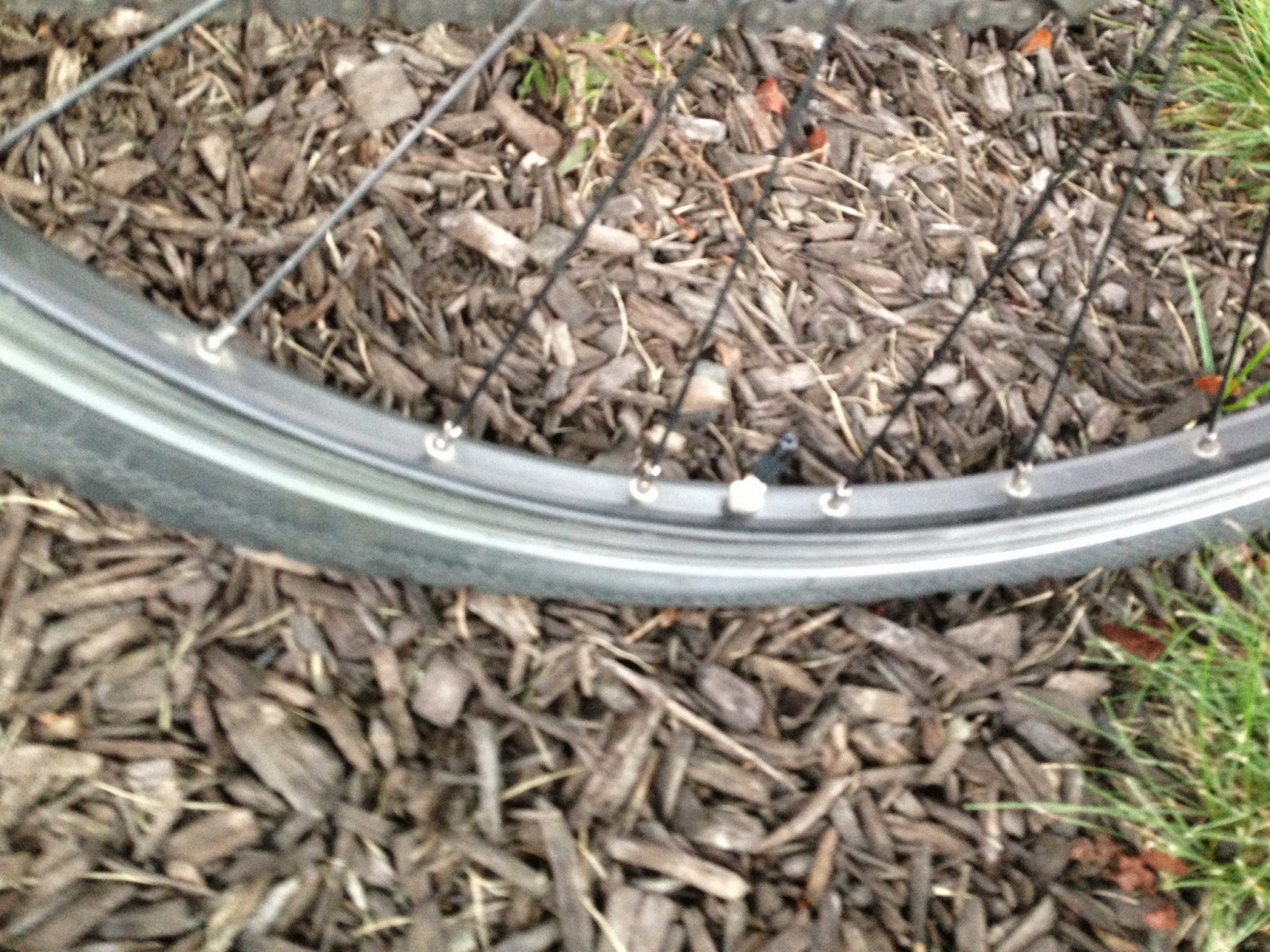 My tube spares now include a brand new tube and patched tube that I put in a little case so that they wouldn't get jostled around in my frame bag to keep them safe. 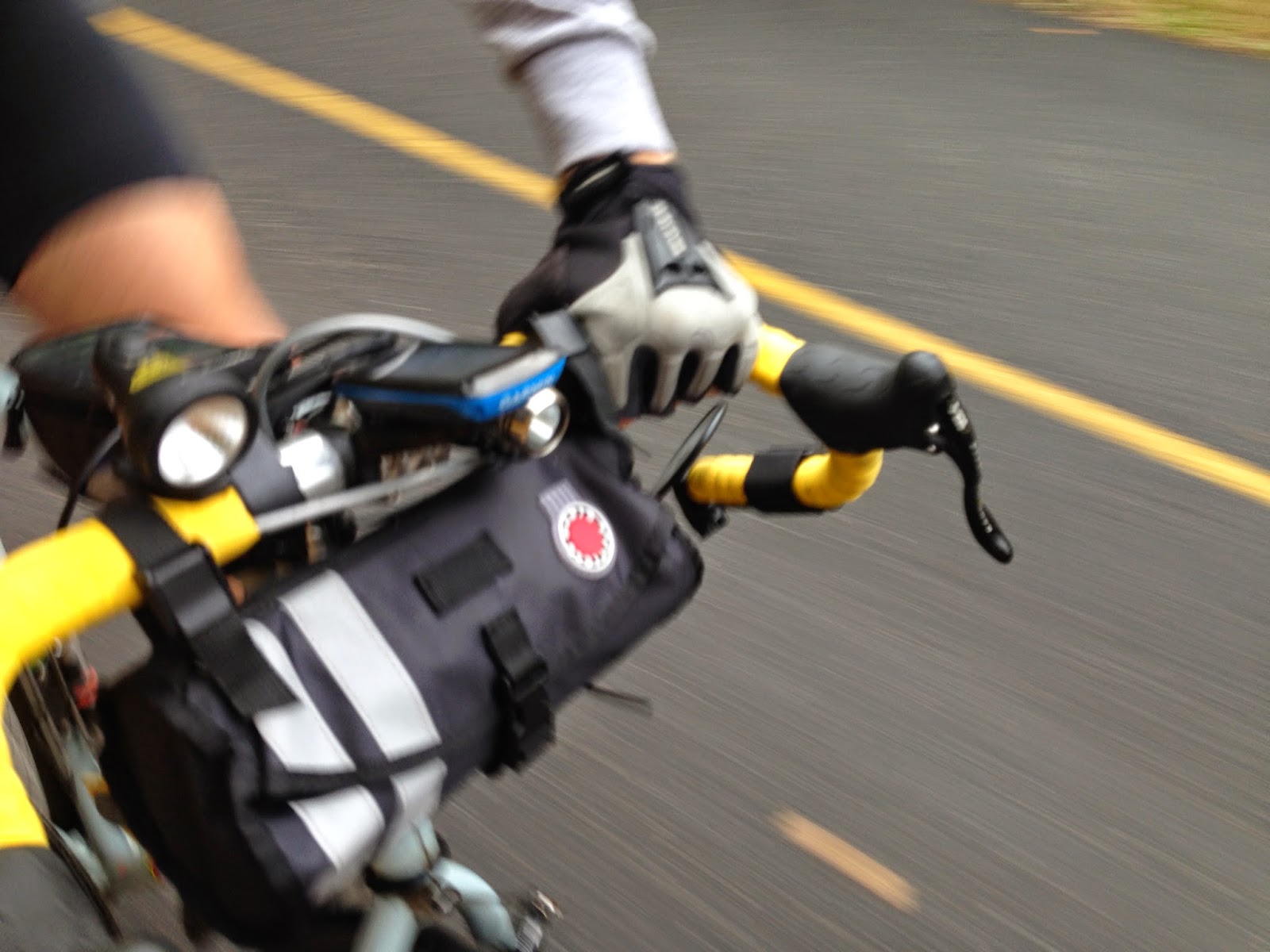 On Wednesday, I rode the Bianchi singlespeed to work.  I rode with the Banjo Brothers Barrel Bag upfront and it was absolutely delightful to carry my immediate things in there, including the battery for my light.  The only thing that I don't like about it is the closure is kind of loose and I don't trust it for holding my iPhone because as you can see I like to take a lot of pictures when I ride and that means I need somewhere for the iPhone to be held. 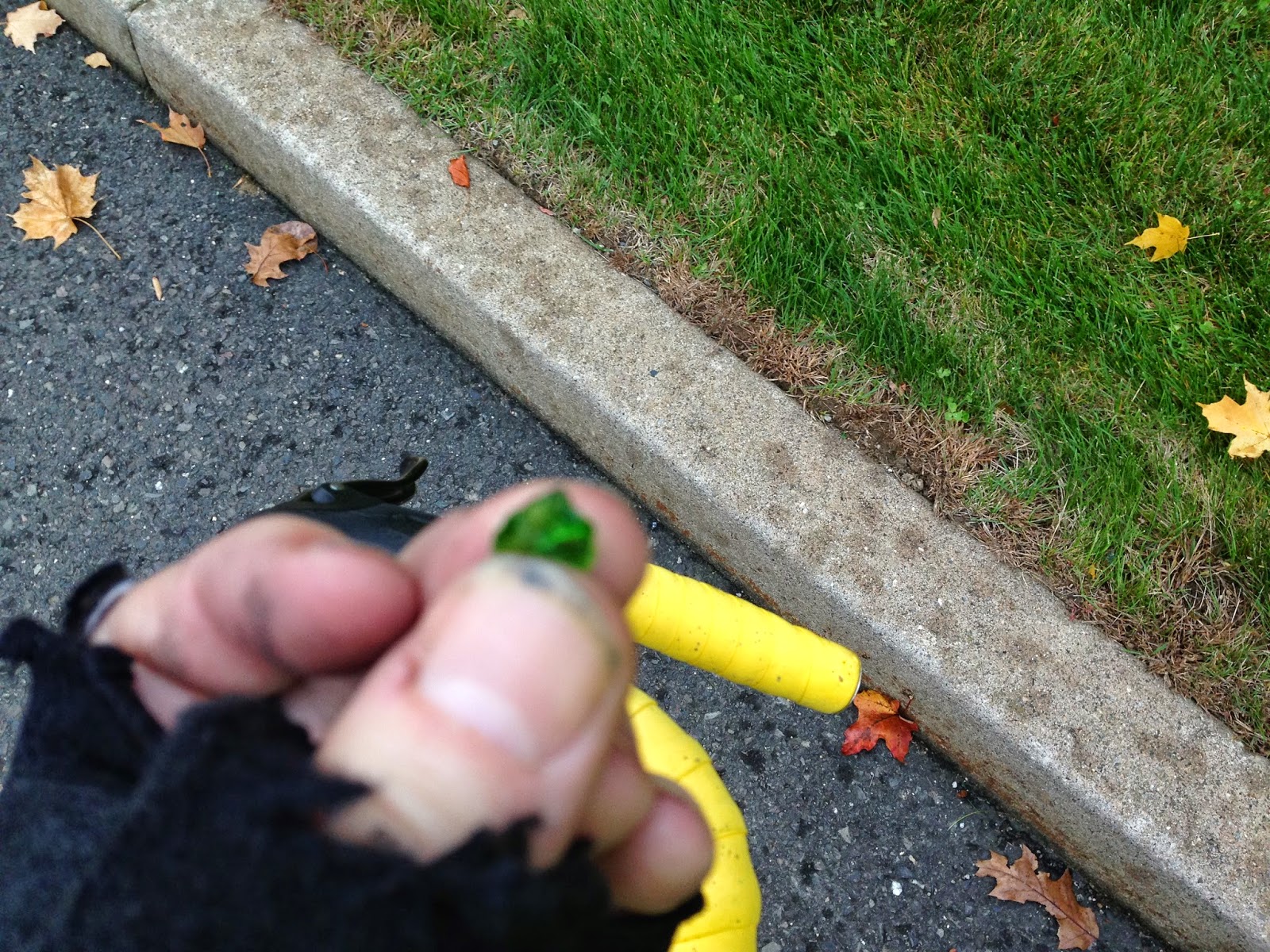 I rolled by Tuesday's crime scene and found this shard of glass.  It must have been 10 mm long. After two punctures on these tires my confidence in them has waned considerably but I don't any other tire could have survived an encounter this. 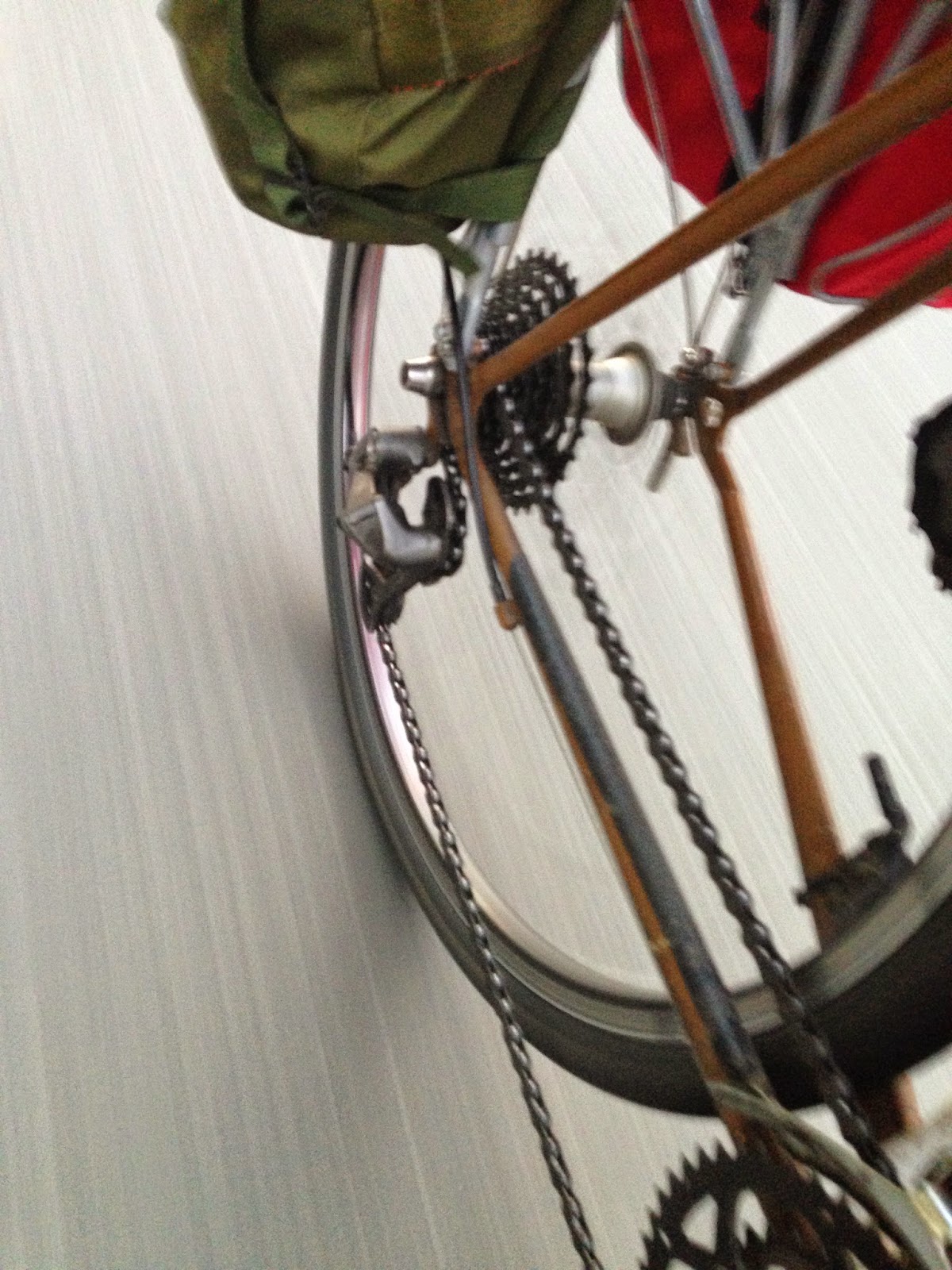 On Friday, I tried the patched tire on my commute and it held.  I avoided my regular dirt road route and also went a slightly different way to avoid a construction zone and the tire held the whole way. On the way home, I rode the dirt road and nothing came of it.  Still, with 2700+ miles on these Continental Tour Rides and two major failings of the the puncture resistant technology, I am not in the market for a new tire.
at 8:58 PM