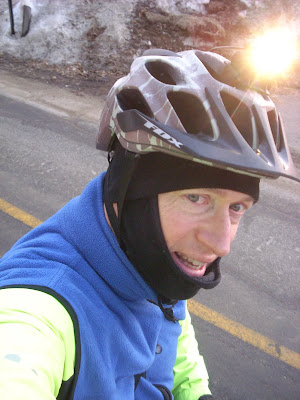 Spring has sprung a little early here in Subrural-urbia and with an expected high in the 50s on Thursday I decided this was going to be the start of my 2011 commuting season.  My driveway was still a bit icy so I walked down the hill and my only concern at this point was black ice.  The night before I switched the Stinson back to fixed gear but it would seem that I didn't get the tension right because 2 miles into my commute I dropped my chain and skidded for 50 feet until I stopped.  I was riding with my helmet cam attached to my top tube and I have tried in the past to record this part of my ride but always unsuccessfully.
The helmet cam did the trick but as you will see towards the end the chain drops, gets stuck between the cog and the spokes and I come to a skidding stop. 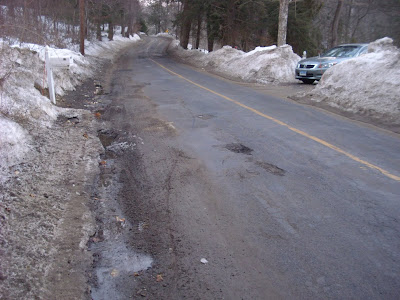 Nothing like a little mechanical to start the morning.  After getting the chain back on I spent a few additional minutes tensioning my chain.  The water bottle trick doesn't work with fenders so I had to center the wheel and then push it into the drops while tightening down the axle nuts.  It took me a few tries till I got it right. 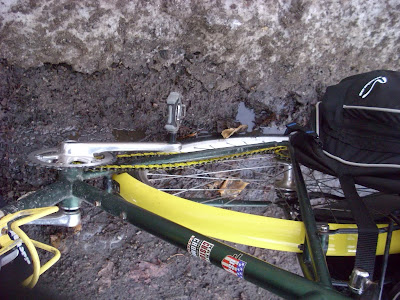 The rest of the ride to work was pretty uneventful.  The morning attire was perfect:  Wicking shirt, long sleeve wicking shirt, riding jacket, and a fleece vest.  I did go with the lobsters and I had a balaclava on but it wasn't really necessary.  Fleece lined tights, winter riding boots and over booties.  Toes did get cold towards the end of the ride but I ignored it because I was at the office by then.
I decided to take a slightly longer route home which parallels Route 6 to the south, its the Walnut Hill to Old Bethel Road route.  Walnut Hill had a lot of potholes on it and it was really wet.  Crossing over Haleyville Road is the fun part with rolling hills and sweeping turns this section of the road that eventually intersects with Route 6 is best part of my commute.  Every time I ride through here I wonder what it would have been like 100 years ago when the Shepaug Railroad line passed through here. 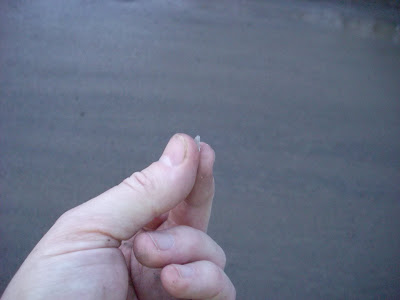 At the end of the line (road) I headed down Rt 6 to Rt 25 and that was a mistake because I picked up a glass shard and ended up flatting.  I should have realized that with all the snow we had in January that were bound to be accidents, especially with I-84 in close proximity. 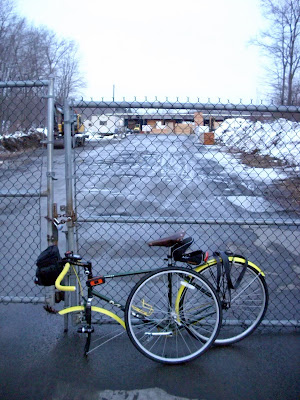 So, I changed the tube in front of the Housatonic Railroad's Reload facility.  Funny, how I rode 500 miles last year and not once did I get a flat and on the first ride of 2011 not only did I have morning mechanical but one in the afternoon, to boot! 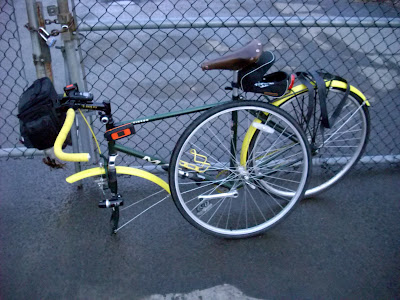 Fixed the flat and got rolling again, only at the end of Pond Brook I rode up on some ice that had quite a bit of sand on it, trying to get around a really deep puddle only to have the bike slip out from under me and I went down on my knee, elbow, and pinky finger.  I think I jammed the pinky, got a little road rash on the knee and my elbow is just sore.  Hopefully, the next commute will be better than this one.  I am thinking about riding the Qball but I think I will need to change my tires.  Depending upon the melt I might just stick with mountain tires.
at 5:41 AM

The road warrior is at it again. That was quite an eventful day of commuting for you. 2 mechanicals and 1 crash.

Hopefully that will take care of all your commuting drama for the year.

I didn't see any contact info for you, so excuse the off topic comment. My name is Chuck. I represent Biking.com. We currently have a text ad on your blog. I have a question about the link. Please contact me via email for further information.

Nice commute Mark, thanks for sharing. What camera setup is that?

TJ, It's a drift HD170 that I have mounted to the top tube right next to the head tube.

bad chain line or not enough tension or both?