A Winter's Reprieve at the Racebrook Tract 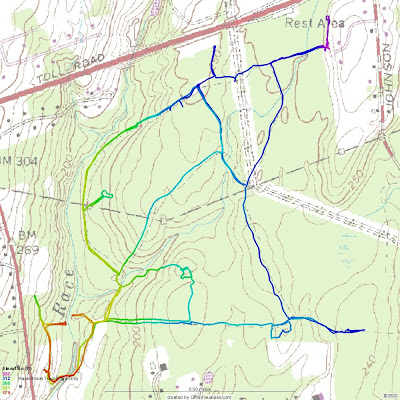 Got out on the Qball Saturday and it was worth every minute of it even though the trails were simply dual track. Met up with a few fellow CT NEMBA Trail Ambassadors to do a Trail Recon (full write up can be found on the CT NEMBA blog) for the possibility of a new mountain biking trail at the Racebrook Tract in Orange, CT. I'd been going to the 'Horse mostly this winter but had to take her in for a tune up because I had given up on the rear derailler. After that flat tire at Dinglebrook and the subsequent man handling I think it needed some skilled attention. 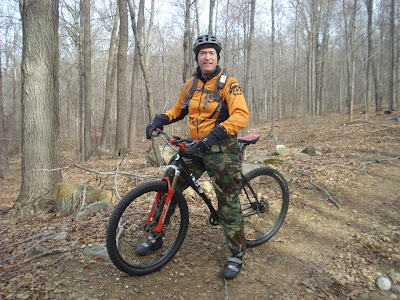 The Racebrook Tract is a neat little park just outside of New Haven that has really cool history behind it. Further up Route 34 is a little lake called the Wepawaug Reservoir. It seems that in the early 1900s someone decided that they needed to draw water from this reservoir to the Maltby Lakes so they built a tunnel from reservoir to these lakes. There is very little information online on this tunnel and it only get's a mention in a state brochure of the Racebrook Tract.

The Racebrook Tract encompasses 210 acres in Orange and 181 acres in Woodbridge. The Tract was purchased from two farmers, Asa Alling and Sylvester Colburn, by the New Haven Water Company early in the 20th century. The stone walls which crisscross the Tract are the original farm fences. The two circuitous trails both start in Orange and cross over into Woodbridge. The longer trail is just over 2.5 miles. These relatively level trails generally pass through mixed hardwoods but parts of the white, purple, and red trails pass through impressive stands of white pines planted in 1909. These are a reminder that the area was originally planted in several varieties of evergreens.

Timber harvests were conducted periodically by the Regional Water Authority and firewood permits were issued. As a result the forest is delightfully open. Just off the parking lot there is a handicapped accessible board walk through some interesting wetlands. The management of this forest was put under the direction of the Yale School of Forestry early in the 20th century and continued until the early 1950’s when water company foresters took over. This was one of the first professionally managed forests in the country.

Because of its large size and its proximity to open space all the way to the Maltby Lakes this is a marvelous wildlife area. The varied habitats: streambelts, forests, wetlands, meadows, and brush make this attractive to a variety of animals and songbirds. Many species of reptiles and amphibians find the habitat to their liking and even avian predators such as the Great-horned Owl can occasionally be seen.

The Ox Shed was built and used during the construction of the Wepawaug Tunnel, parallel to the white blazed trail, built in the early 1900’s between the Wepawaug Reservoir on Route 34 and the Maltby Lakes to combine the runoff from the two watersheds. It is not in use at present. The Ox Shed was originally used a paymaster’s shed for teams hauling to and from the tunnel construction. Later it was used to shelter oxen, mules, and horses.

In the back ground of the picture below you can make out what appears to be a road bed. I think this was for the tunnel from where it must of exited the ground somewhere towards the intersection with Route 114 and 34 in order to cross over the Race Brook. 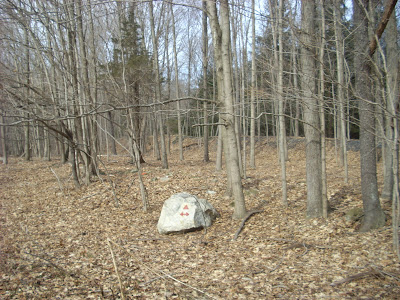 My guess is that the "Tunnel" was merely a large pipe and this water pump (below), in the middle of no where, was probably connected to it. 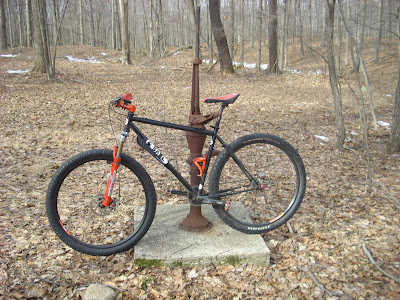 If you are looking for single track, this is not the place for you at this point in time, however, if need a place to take the family or want get a little taste of riding off road then this place is the ticket. If CT NEMBA is allowed to put a trail in here then it will make this place even better.
at 12:44 AM