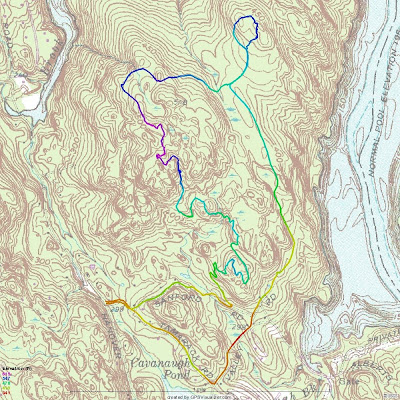 Sunday's weather report was for snow starting at 6 AM and then turning over to rain. When I got up it was still sunny so I jumped on the Qball and headed out. Got the 'Horse back from the shop and the Bicycle Center in Brookfield did an outstanding job but I didn't feel like getting it all mucked up right now. If fact since I am going to race the Qball this season, I might as well get as much saddle time on it in the woods as possible. 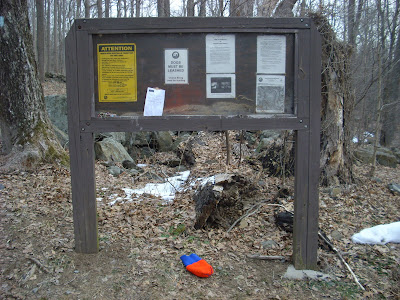 Rode over to Upper Paugussett this morning and it was around 25 degrees and partly cloudy. Felt good to be out on the bike. There was an interesting little sign on the Trail Board at the Echo Valley lot. Guess someone was running their dog and lost the leash and someone found it and hung it there for the owner to find. Nice use of the band aid instead of tape. 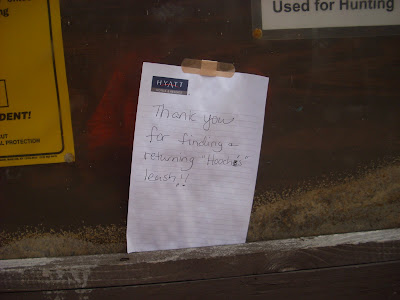 In the map above you can see I have new loop that I think I finally perfected. It will be good for XC skiing as well. Granted I would rather try to find some way to take the white trail all the way back to the fire road. There is a big tree down in the middle of trail, right in the middle of a wet area making the trail impassable. Need to explore that area a little more and see if there something else that can happen.


While it appears that there has been more ATV incurrsions on the fire road they seem to be staying off the Gussy. The Upper Gussy looks pretty good but there were a lot downed branches and twigs making it stop and go. I cleared the big stuff off. 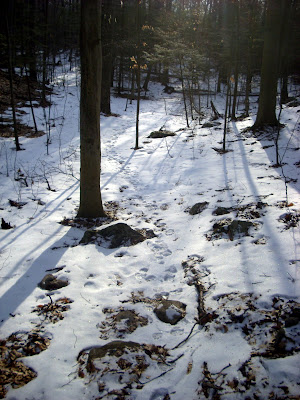 I noticed this downed tree earlier but didn't have time to do anything about it. Ironically how it fell where the other one is, turning it into a bigger up and over. I did a little improvement work, too to make it more rideable. 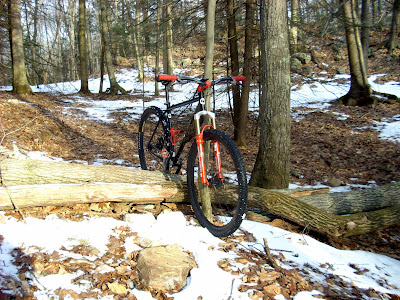 It seems someone has taken it upon themselves to block the trail by the Log Ride Short. Love how they ruined a perfectly good sapling to block something they had no right in doing. I fixed it with my collapsible saw. Granted this benched area needs a little more work and I plan on getting to it this spring. 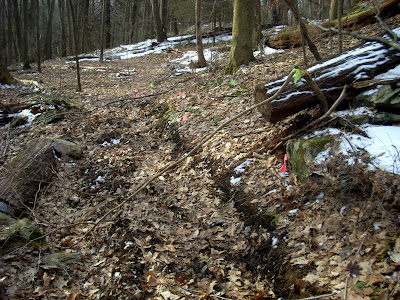 This was an interesting thing that found along the way. I didn't go near it but first I thought it was a brick until I noticed that is appeared to disentigrating/melting. I wonder if it's a salt lick? That might explain the runoff. If it is, I think that is illegal and next time through, if it's still there I will probably kick it off into the woods. 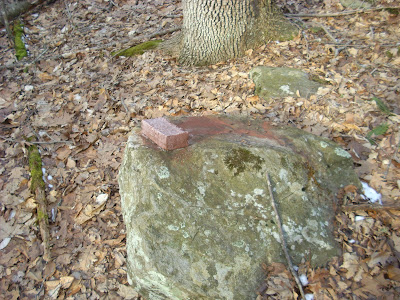 The little off shoot loop only adds another mile to the ride.
at 8:41 PM

Hey, if it's a salt lick, you might wanna leave it there ; never know when someone'll need some electrolytes! ;o)

That's pretty funny. I think it is a Salt Lick because I found something that what I saw closely resembles the products on this animal products website.

So now the question is, do I leave him an actual message saying something like if you want to do trail maintenance, please contact me or do I assume said person doesn't care and thinks he owns the forest, evidenced by the trail blockage, and just make an extra effort to thwart any attempts to ruin the trail? Of course, if I see anything hunting related to take it down immediately.

DO you think it's bait to increase game traffic for some hunter or justa poorly placed salt like for herds of local domesticated whatevuhs? IMHO, I'd toss it off the trail, figuring animals can find it if they need/want it and if it's just bait, who cares. Though, a note would certainly be funny...

Oh, forgot, it could just be alien poo...

I am on the fence about leaving a note. However, I wonder what would happen if it got urinated on - would that deter the deer from licking it?

'Cuz and animal's never licked it's own junk of sniffed/licked/eaten its own excrement?! ;o) 'Course, it might not like yours. My final vote, leave a uric acid tag and a note for the owner!

I think I will. It will give me something to write about this weekend when I ride through there again.

Good call. Come up with some clever little note and an overengineered method of posting said note,and take copious pics for posting. Also mark it biologically as previously discussed, but take no pics--I read your blog at work after all! ;o)

Yeah, the pix will be post action shots. However, an artistic Point of View movie on YouTube could be an instant classic. I am trying to find the rule in the CT Hunting guide on the use of Baits. I think I will creatively adorn that to the lick.

Here you go. According to the CT DEP website, Use of Attractants for Deer Hunting, Upper Paugussett happens to be in Zone in 11, however, it is public land and not private so the salt lick is verbotten (forbidden for those that don't remember SGT Schulz from Hogan's Heroes) according to CT DEP.

Use of Attractants for Deer Hunting
The following attractants may be used while hunting deer in Connecticut:
Deer decoys during the early and late archery seasons only.
All types of scent attractants (i.e., doe in heat, buck lure, urine, tarsal glands, food smells, smoke pole) that provide no substance for deer to consume.
All types of sound attractants (i.e., doe calls, buck calls, antler rattling, electronic calls).
Hunting over planted fields where normal agricultural planting, harvesting, or post-harvest manipulation is used.
In addition to the attractants listed above, the following are allowed on PRIVATE LANDS ONLY while hunting deer in DEER MANAGEMENT ZONES 11 and 12.
Minerals or chemicals that may be safely consumed by deer (i.e., salt licks).
Artificial or natural foods placed, scattered, distributed or deposited (i.e., hay, grains, fruit, nuts and other foods that may be safely consumed by deer).

Looks like you've got a license to disrupt--keep us updated and be safe out there!