Is that a straight chain line or what?

OK, this is post is not really about mountain biking but it's related because I like single speeds for some crazy reason and here is something I am toying with, not to mention we still have snow on the trails around here, and unless you are riding a fat tired monster like a Surly Pugsley, the crusty icy snow is not fun to ride on. So, during the winter months, I find tinkering with my bikes fills in the time. At least I am doing something biking related.

There are trails in the air! Got a heads up from the DEP that my trail in the Upper Paugussett is close to being approved! Just waiting final disposition from the DEP Trails Committee. Ironically, someone contacted me last week about the Lower Paugussett, so it looks like after I am done with the Upper Paugussett, I might be setting my sights on the Lower next. I have only ridden there three times but it has some serious potential. Anyway, so this guy gave me an idea on what the name the new trail, something with Gussy in it. Maybe the Upper Gussy Trail. That way, when I build something in the Lower, that trail could be called the Lower Gussy Trail.

Back to the bike! Look ma, no tensioner! I counted the teeth on the gears and it was on a 17t sprocket, so I went out and got a 17t freewheel cog, put the chain on, applied a little elbow grease to get the axel into the vertical drops and voila! There is no sag, at all! Perfect. Before hand, I did consult with the Single Speed master himself, Sheldon Brown, and in my note I asked:

I was wondering if you could tell me whether you have any insight on a "magic gear combo" for setting up a road bike with vertical drops as a single speed? I got this 1985 Cannondale SR-300 from a buddy that is already rigged that way, at least in a funny way, by using the 6 spd cassette and manually switching the gears till you get to the tightest one, which I think is probably a 19 or 20t cog. I need to pull the wheel off and see what they actually are, but it's a six speed cassette and the chain is the tightest in the third gear out from the center. My Crank is a Campy 42t. Is this the magic number or do you have a better one?

And promptly replied with:

It varies from frame to frame, 'cause they have different lengthchainstays. On my old Cannondale T-500 it worked great with 42/15,my favorite fixed gear. I discuss this issue in some detail at: http://sheldonbrown.com/vertical.

So it worked, only with 42:17. Looking at the chain, I think the reason it's working because I found two half links in the chain. They are actually speed links, but I don't think I will have any problems (hope), it's not like I am on single track or anything, so the resistance is very light. 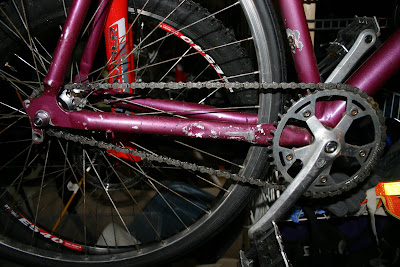 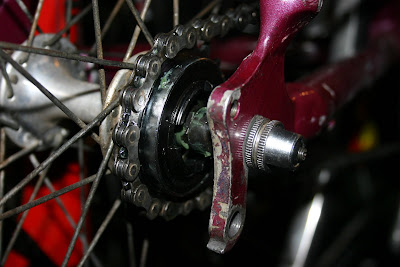 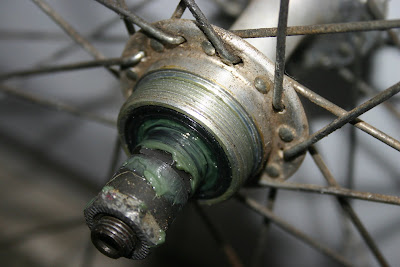 Seeing that I have a fixed hub, it looks like Barney, the purple Cannondale could become a fixie. I think I am going to make sure this gear combo works for now and get used to riding on a road frame before I make the next move to ultra chic, fixie stardom! I actually have started take a spinning class and given the rigors of that training, I think fixie commuting to work will be fun.

Ah great to read you want to try fixed. I have experience with vertical dropouts and I used a half link and that worked perfect. Also you can file the axle flat on one edge or take a little off the back of the dropout.

Peter, thanks for the tip. That is something to consider