Took the Q Ball over to Ridgefield to ride with some co-workers who live in the area. We all met up at the parking lot off Bennett's Farm Road and rode the Bennett's Pond area, which is marked as a State Park and is acknowledged by DEP as the owner but its not clearly identified as such on DEP's website. Never-the-less, the last time I was here was around last Thanksgiving, it was 20 degrees and I started riding with the wrong pair of gloves and I had to turn back to get warmer gloves. It was a good ride and I covered alot of territory.

This ride, however, was led by Alex who used to work in my office but changed jobs and is now working at my company's facility in Somer's, New York. Alex rides a FS Cannondale that he bought with the IBM discount at Hickory 'n Tweed in Armonk. Also on the ride was Ross, who works in sales at my work place. I have seen him around but never had any direct interaction with him. He rides a Kona DawgDelux. Nice bike, same geometry as my AC, only 10 to 15 pounds lighter.

A really nice map for some of the trails can be found at the Ridgefield Open Space Association's website. The map was done right after the town and State acquired the land and trails were put in by ROSA, however it hasn't been updated becasue there are even more trails in there now, marked with the same signs that ROSA initially used and there are also trails blazed Red, Yellow and Blue.

We started out on the green trail, basically going counter clockwise away from the parking lot. The green trail has a fun downhill section which leads to the edge of the pond and then the trail continues along the pond. We rode this to the white trail, which heads towards one of the tributaries to the Saugatuck River. There is a bridge there in which you have to walk your bike across.

Last time I rode there, I followed the white trail which heads back to the edge of the pond and heads up into a very narrow valley that has a few trailes branching off it. However, we heading straight up a gradual climb on a well traveled trail that wasn't marked. On the map below, this trail is the portion lying due east of Wataba Lake (aka Rainbow Lake) and goes up to waypoint 001, which is where the Purple Trail heads back down to the White Trail. We continued to follow the Purple trail till Waypoint 002. From there the trail signs stopped and Blue Blazes took over. At Waypoint 003, the trail turned due south but there was an old trail with faded Blue Blazes that headed up a draw and once atop the ridge, the Blue Blazes were picked up again. So it looks like from the point we turned off, the trail made further clockwise loop around the hill to come back to this point.

At the Y04 Waypoint is where the Yellow Blazed Trail comes in. The Yellow Blazed trail was a nice open trail that was reminiscent of an old farming road. Between that point and Waypoint 004, it is literally unrideable. One one side is sheer cliff going up and the other swamp. The trail is basically a rock scramble. I marked the next point as B05 becasue I think this is where the Blue and Yellow Blazes part company. At Waypoint 005 is where the Red comes in.

We followed this trail to where its marked Purple, which I believe indicates this is where the Purple starts. Alex went back this way, while Ross and I took the easy way back to bridge and got there a minue before Alex. It was fun hammering through here and I was able to roll right through alot of technical rocks and roots because the trail wasn't very steep and it was pretty wide. It was fun to experience the full benefit of the 29 inch wheel.

On the way back Alex turned off the farm road which heads back to the parking lot at Waypoint 006 and led us onto some groovy single track that was a fantastic ride up the hill straight back to the parking lot. It went through an area that appears to have once been a nursery because there were ridged rows where it looks like stuff was planted and there holes in the ground that appear to have been systematically dug. Like there were trees growing there at one time that were dug up to be planted else where.

Total Odometer for the ride was 6.05 miles and it was done in exactly two hours. Definitely going back there again sometime. 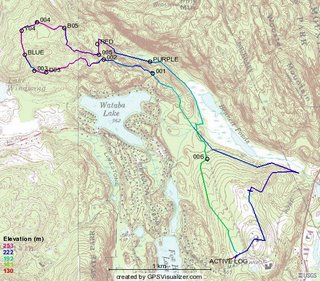