With S'Autumn coming to end soon I planned out a slightly more aggressive route for my return to Voluntown, CT to ride some of the roads that I didn't get to during my last visit. I call this route the Teufelsschwanz or Devil's Tail because I added added a leg to stop in a nearby town for food and water at the 40 mile mark. 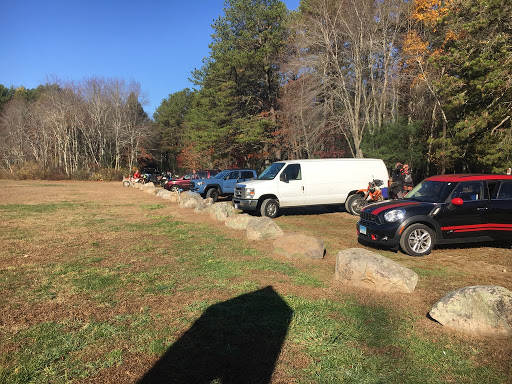 You could not have asked for a better day!  It was 50 degrees by the time I got to Voluntown and where I parked I was the only cyclist amongst a sea of Moto Crossers, and the smallest car in the lot, too. Apparently, there was a remembrance ride taking place from here for a fallen comrade. The beauty of starting from this part of the forest is availability of porta-jons! I am glad I exported the route to a GPX and then loaded to RWGPS because when I tried to load the route from the Komoot app on my Garmin it wouldn't work.  I thing what probably should have done was have my phone on and downloaded the route with the phone connected. 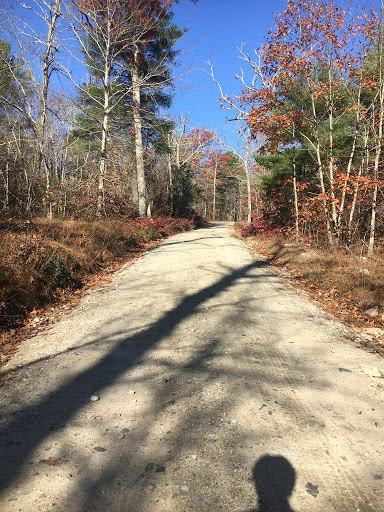 This time I was was wearing my blaze orange riding jersey with an equally as bright day glow green long sleeve jersey that I had to remove because the temperature just kept rising and rising. Leaving from the parking lot, you start to climb but it's on nice dirt roads, which you come to appreciate more later on in this course which has a big impact on the quality of ride. By that mean Hero Dirt vs Napoleon's Death March. 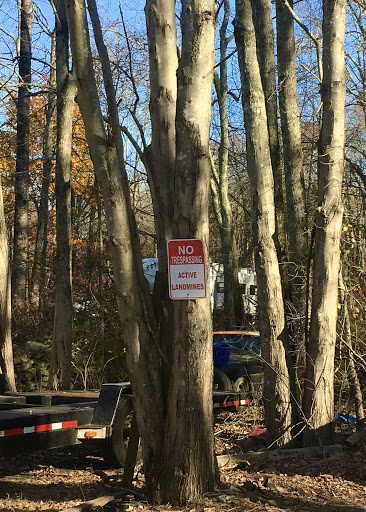 This sign pretty much sums up what a lot of the route turned into. Many of the roads I was routed the course on were really trails that have suffered quite a bit of abuse from the Moto Crossers.  They may appear on Komoot or RWGPS as roads but they are really just trails which at times were ride-a-ble and many times were not. The biggest hindrance being loose rocks and washed out trail beds. 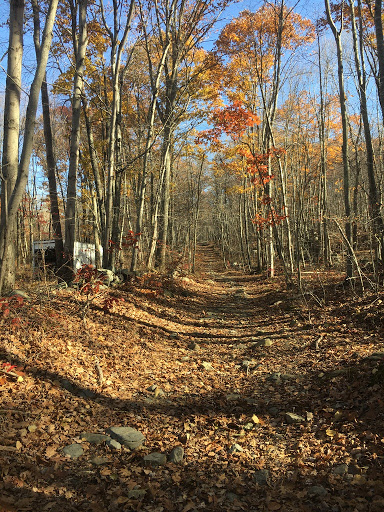 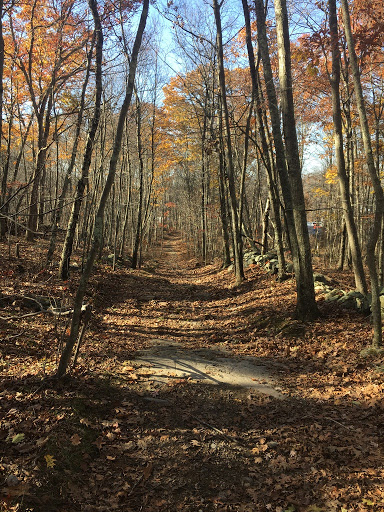 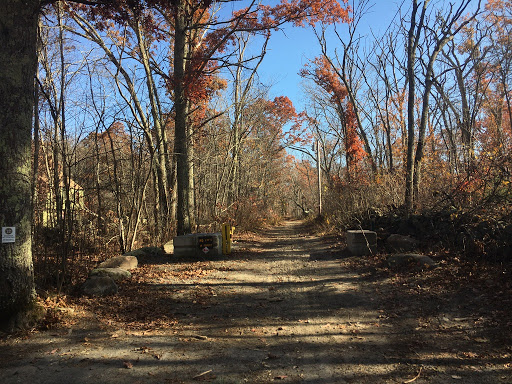 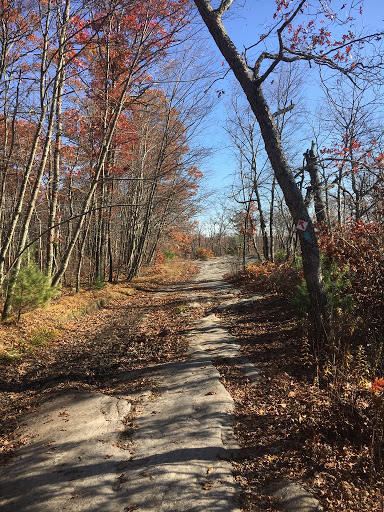 There was tons of slick rock to ride 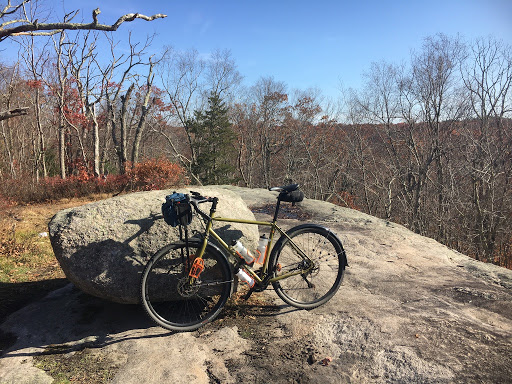 At the top of the climb there is a great overlook 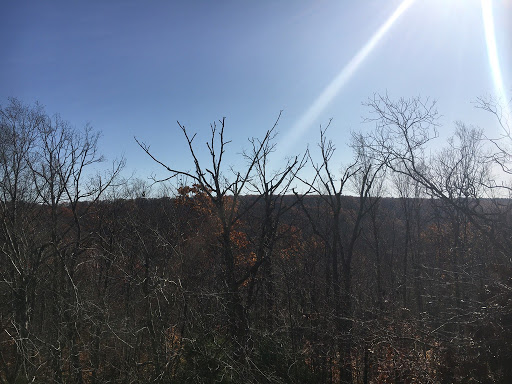 I had to remove a layer at this point 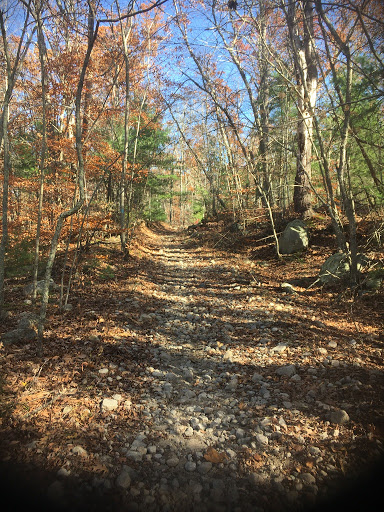 And then more land mines. In fact it was so bad some Moto Crossers who passed me on the descent even left the trail 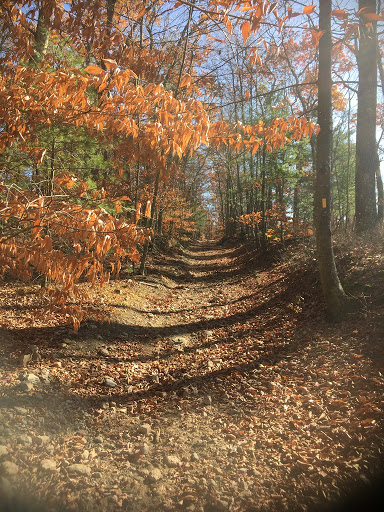 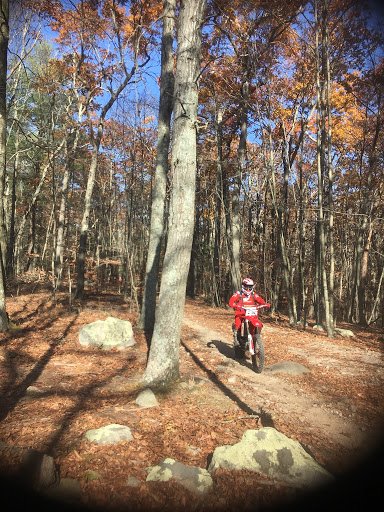 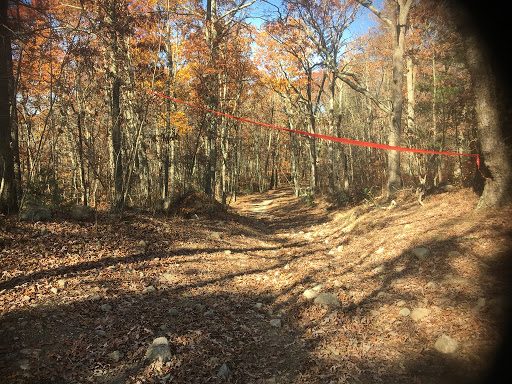 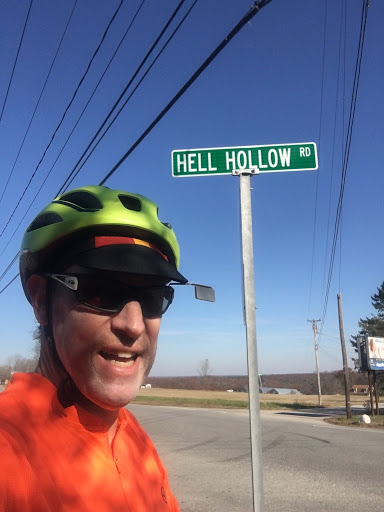 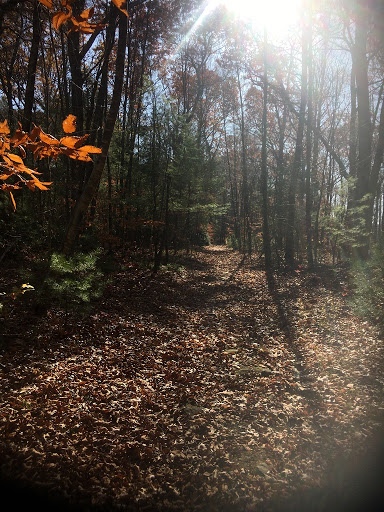 After a short down hill I came to another trail that I started riding and then it turned into the Pachaug trail, which for the most part was rideable but would have been more enjoyable on a mountain bike. 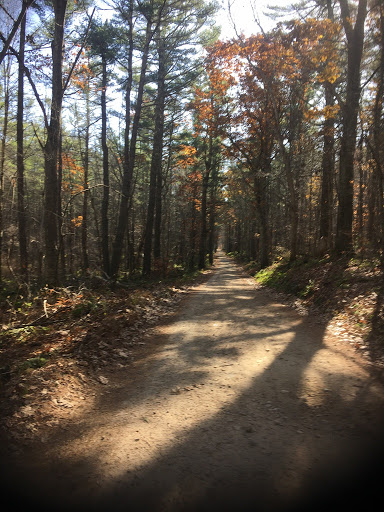 File back to Hero Dirt! I rode this a couple of weeks ago in the other direction only this time it was a wonderful descent. 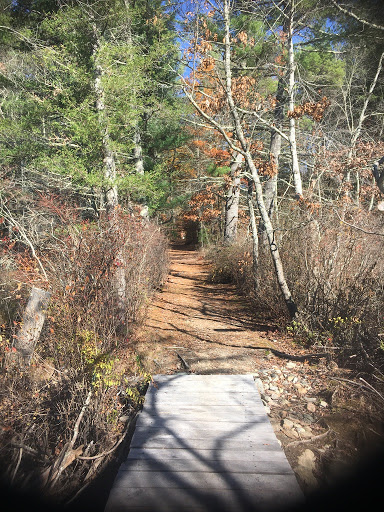 Left the nice dirt road for another trail. The way down to the bridge was tough and slow but once over it the trail turned nice and pleasant to ride. At the end of this trail I came out on a paved road and my route was supposed to take me to Hazard Road in Rhode Island. I thought I would be riding through an old neighborhood of sorts only to find out that it's an active camp ground and the caretaker/owner stopped me and said I couldn't proceed. 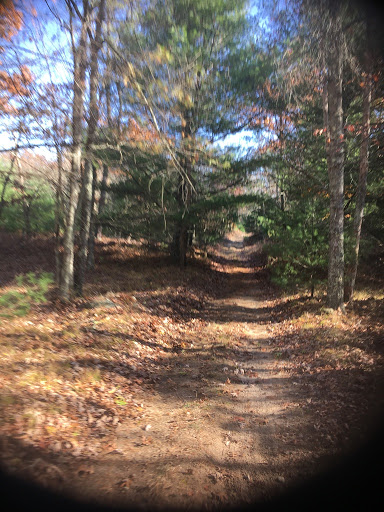 I finally picked up my route again and found where the next turn was but decided against it because it looked like more trail so I continued heading east on the road that I was on and picked up my course again. Heading south again, I turned onto Welch Hollow which started out nice but then turned nasty. 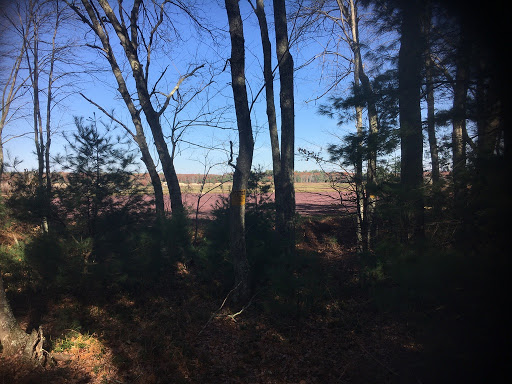 I stayed on it, past the turn onto Narrow Lane which my route was on because it looked pretty rough. To the left you could see a cranberry farm. I kept on riding Welch Hollow until the next turn and I am glad I did because it was righteously smooth. 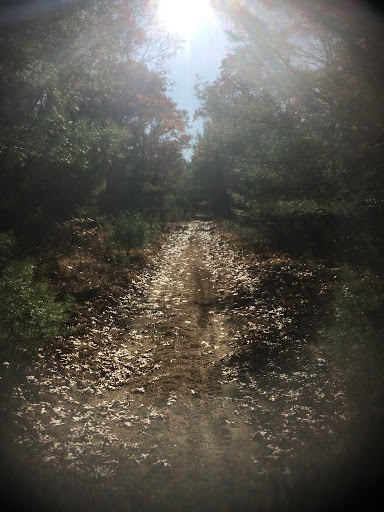 Turns out this was called Wickaboxet Rock Road and it was a pleasant change to the bone shaking ride on the previous trail. 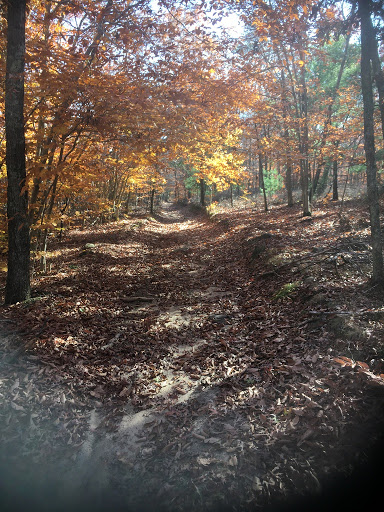 I had to ride some pavement to get to the next road/trail called Plain Road.  It had good parts and bad parts but when it made a hard right to the west again I was back in familiar territory and the biggest climb of the planned part of the ride. 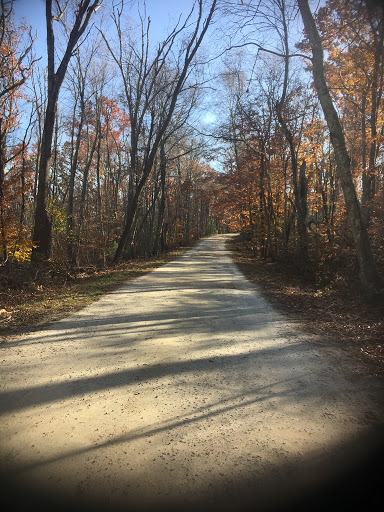 After the climb I headed down a new dirt road that was really a treat after all the trails that I had ridden and by the time I got to the intersection with Old Ten Road Road I had a decision to make. 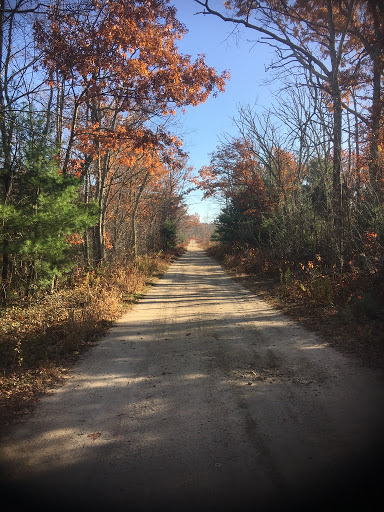 Do I continue or head back to the car. What I didn't know at the time was if I came back in the dark would I still be able to get our of the parking area?  I opted to cut the ride short and ride back to Voluntown. 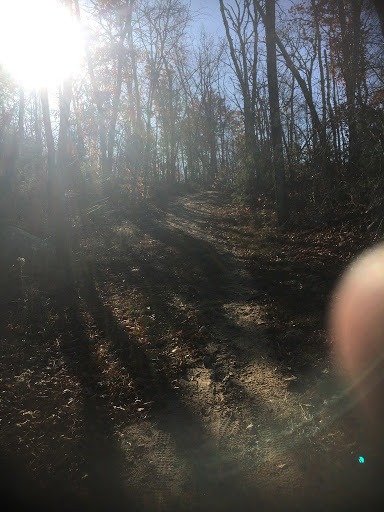 I rode up Old Ten Road Road and it had a really tough climb on it as well. I tried to follow the trail down to the road but after the driveway I lost the trail so I back tracked and headed down the driveway. 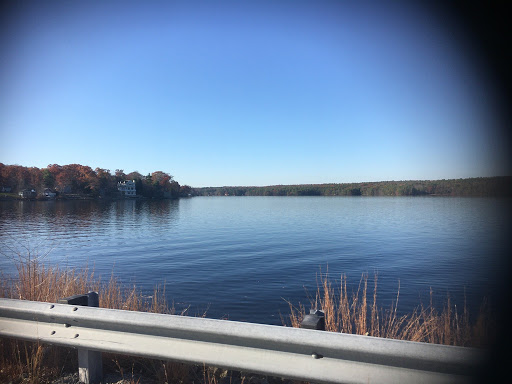 The ride back to the car was 10 miles and it was long and hilly.  It was 8 miles of pavement and 2 miles of dirt.  At least I ended on dirt! I can't wait to return, knowing what I know now.  Next time, I am going to do the first route I rode with Richard, only in reverse with a few tweaks.
at 11:00 PM

Welcome to my world. We do a bit of hike-a-bike here, and yes, the motorcyclists make a mess of the trails, including the ones they're not supposed to be on. Come spring there's gonna be some huge puddles to hike around.
Steve