A fellow Gravel rider, Richard, who lives in New London, CT, reached out to me a few weeks ago and wanted to know if I wanted to try a route that he came up with that connects Pachaug State Forest (CT) and Accadia State Forest (RI) and the dirt roads in between. I was so excited to be riding out this way that I spent all of my free time updating my own gravel map, Roubaix to Brew, There is a plethora of dirt out that way. 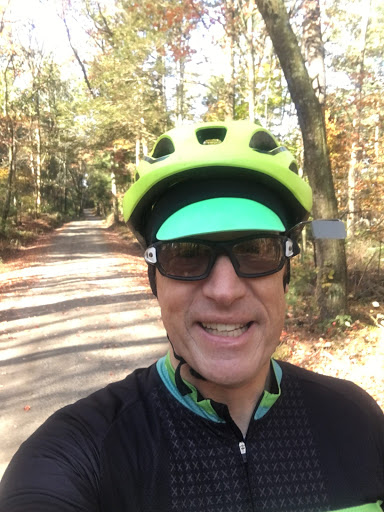 We met Sunday morning at a parking lot on Trail 2 and Hopeville Road at 9 AM. Although sunny, it was still pretty cold, a brisk 32 degrees but the weather report said it would be warming up. When Rich was getting ready I noticed the last thing he threw on was an orange reflector vest, the kind you would wear if you were out jogging on the roads. Funny, I was going to wear an orange cycling jersey but opted for my D2R2 one instead but I should have gone with the orange. In fact, I even have a blaze orange jersey in my car for emergencies. Come to find out, you need to wear orange during hunting season. However, it's still not allowed in CT on Sundays, except on private land, but is allowed in RI.
WEAR ORANGE in HUNTING SEASON! 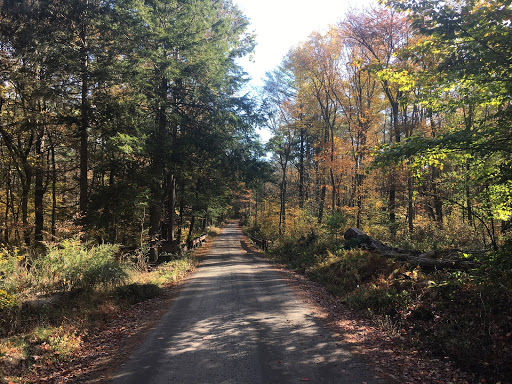 No need for a first dirt picture today because we started on dirt and it stayed that way for the first 4 miles of the ride, then there was a three mile paved section until we were back on dirt and it stayed that way for 8 more miles. Funny thing about the weather. As soon as we climbed higher it got warmer but then bombing down the road to Voluntown I was glad I kept my cycling jacket on because it got cold again. When he hit Fish Road, the start 8 miles of dirt I took my jacket off but kept my arm warmers and shoe covers on. 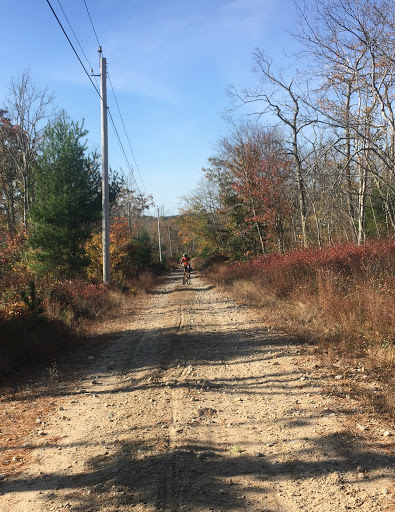 From Green Fall Pond to the intersection with Rockville Road there were some challenging parts because it was really soft and sandy. Had it not rained on Friday it would have been really dry and tough on the climbs. Also, we were passed by a big group of dirt bikes. The best thing you can do with these guys if you hear them is move off the road/trail ASAP on any turns or where there is a limited sight line. 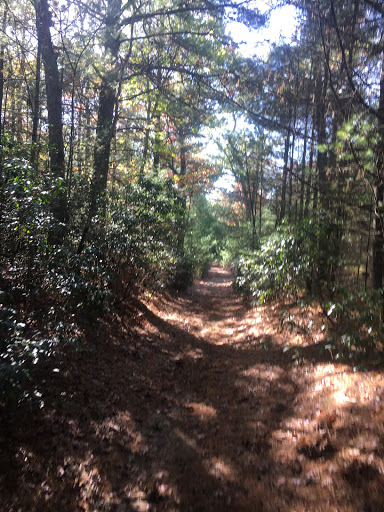 After crossing Rockville Road (Rt 138) the route follows a dirt path that doesn't have any name but dumps out onto one that does, Noahs Ark Road. 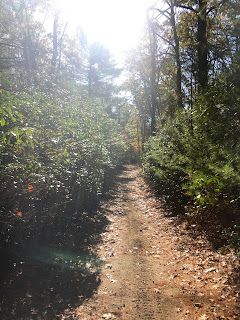 Turning south onto unnamed track that happens to be the boundary between Rhode Island and Connecticut.  Eventually, the route we were following turns into Kinney Hill Road. 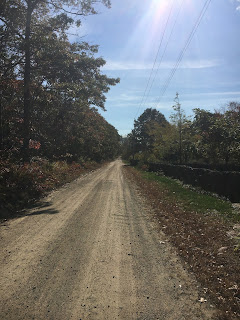 At the start of the ride, Richard warned me that there might be a dog or two that could come out after us. Sure enough, when we passed the first farm house on Kinney Hill I almost got T-Boned by this huge Chocolate Lab. We started pedaling harder to get away from it and it wasn't really trying to bite us. It was just chasing us and barking. Richard yelled at as I was reaching for my water bottle with the intention of spraying water in its face but it finally gave up the chase. 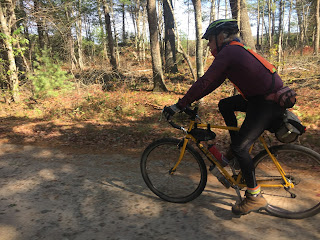 The dirt roads in Arcadia were so sweet. Rich kept offering to try some trails for variation but why would you want to slow down when you could just cruise these dirt roads. 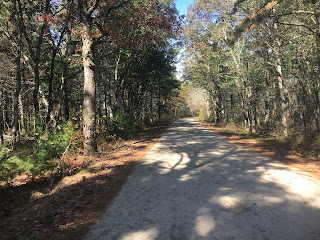 We actually came across quite a few groups of horses. Of course, you always slow down when passing horses which we did. Even the horses were decked out in blaze orange. 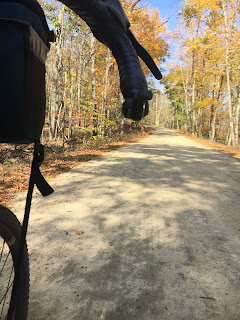 The biggest climb on the route was on Plain Road that headed through Arcadia State Forest. It has a max grade 10.6% for nearly 300 feet of elevation gain over 1.2 miles. Maybe not the steepest, that was on the ride up from where we parked but this was certainly the longest climb of the ride. 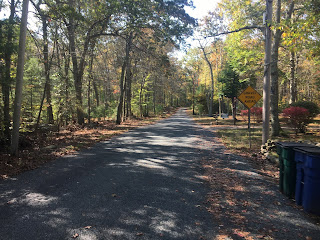 When you first turn onto Old Voluntown Road and see the Dead End side you have to realize that's only for cars.  The road is not dirt but it has gravel like texture, maybe a bigger stone used for the chip seal. It has steep descent followed by a steeper climb that maxes out 17.5%! 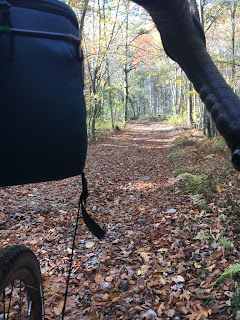 Eventually, the road does end at a trail that is leaf covered and rocky but still rideable. The rain from earlier in the week made many wide puddles in the trail and I was glad that I had kept my shoe covers. At the start of the ride I was thinking that I should have taken my fenders off but now I was glad that I didn't. 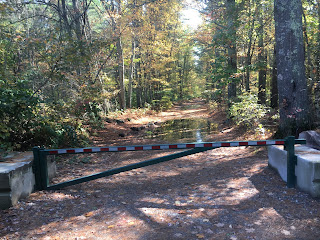 Old Voluntown Road ends at this impenetrable gate.  Apparently its been reinforced to keep out everyone except bikes to prevent people trying to 4x4 through here and end up getting stuck. 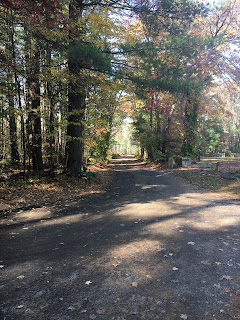 Continuing north and back into Pachaug State Forest it was flat for a mile or two but then starts to climb then descends and climbs again to Bailey Pond Road. 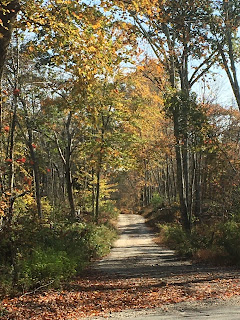 At Bailey Pond Road the road continues but Richard said that it turns to singletrack so we headed west on this this paved section of the route and a formable climb of a mile at an average 5% grade. 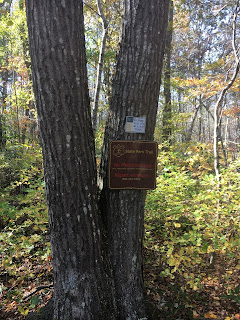 It's about 4 miles to the next dirt road. Sand Hill Road starts out as paved but then gives way to dirt. 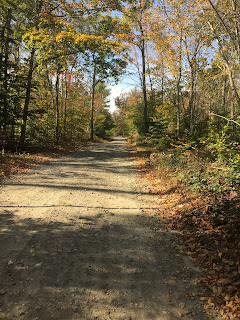 From Sand Hill, we rode all dirt roads to Hell Hollow, which wasn't dirt but were only on that for a short bit and then we were back in the State Forest and from there, it was all down hill and dirt back to the cars. 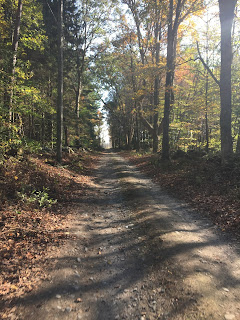 The Gravel Roads here are INSANE!
at 6:37 PM