The Dirty Apple: Rotten to the Core 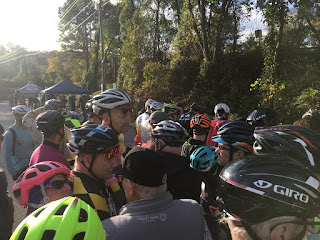 I got to Golden's Bridge around 8 AM and it was a mad house.  It was impossible to find the check in line because they put the signs in front of the tables instead of behind and in view.  I recognized a former work colleague from my days at IBM, Gail Blumenfeld, that I said hello to, but she was crazed and couldn't spare any time. 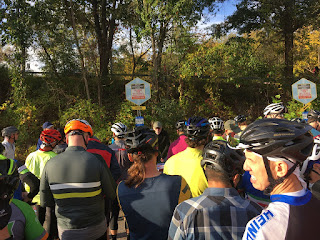 I was supposed to meet Steve Taylor, only he was running late and was only doing the 50 mile course. I figured we would run into one another while out on the course so I headed out solo. 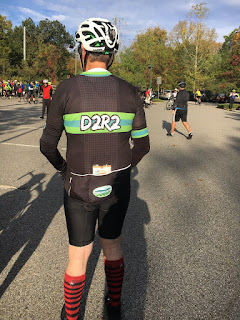 I wore my D2R2 jersey and had someone take my picture so I could send it to Steve so he would recognize me. It was my first time wearing the jersey since I bought at this year's D2R2 that I couldn't ride due to a back strain back in August. It is a nice jersey! 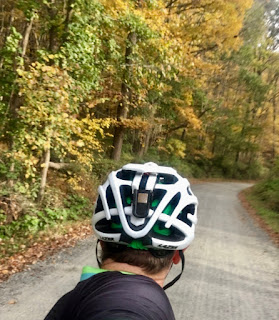 First Dirt occurred about a mile and a half into the ride on Nash Road. Westchester Cycling Club stopped running the Dirty Apple some years back and only started it up again last year. I had heard about the earlier events and after cataloguing all the Westchester County dirt roads on my Roubaix to Brew dirt road map created my own route that renamed as the Dirty Martha. Will and I rode the Dirty Martha route on two consecutive Veteran's Days and the weather was less than optimal. Today, however, you could not have asked for a more beautiful fall day! 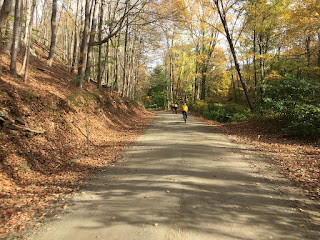 The route selection was pretty good but had some route regurgitation, meaning you went out on a dirt road and you came back on the same dirt road.  It's not bad to do that because you are on dirt but it definitely lacks creativity.  For example, the route descended Turkey Hill and then went out on Baxter and then came back that way but only on Baxter. If you are going to do that then we should have climbed Turkey Hill again. Just saying. 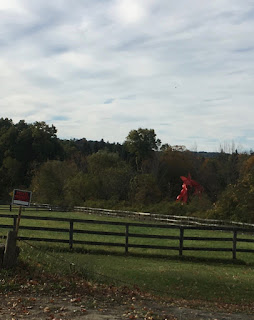 The funny thing about riding these roads is how often you will find sculptures popping up out of no where.  No offense, but some big red, bendy metal sculpture in the middle of pristine horse paddocks seems out of place. What were they thinking? 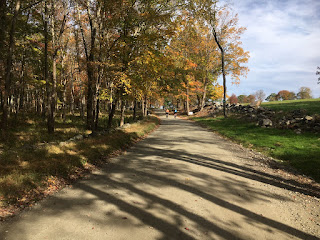 Just past that ungainly sculpture I struck up a conversation with a guy who was from NYC but rode mostly in Vermont and never knew about these roads.  When we turned onto Norton Lane there was a guy at the intersection who couldn't inflate his tire so I stopped to lend him my pump.  We tried to inflate his tire but my pump didn't seem to be working. I have ridden almost two thousand miles with that pump, never had to use it, and found out on this ride it doesn't work. Wow! Actually, it does work because I tested it when I got home later that day. The guy with the flat had a bad tube. 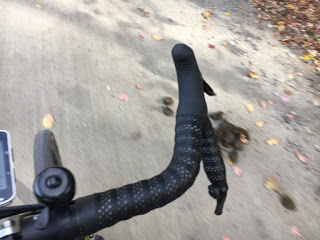 A stark and frequent reminder on these dirt roads that you are in horse country. Ironically, I didn't pass any horses. 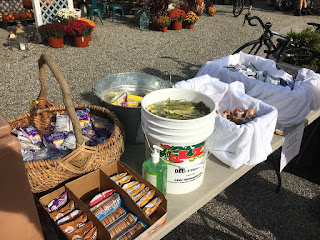 On Baxter Road there was a water stop of sorts but I wasn't really sure what that was and didn't need to stop anyway. I was eight miles into the ride and still had full bottles anyway.  At the main rest stop, however, there was a bountiful cornucopia for consumables and a bucket of pickles! 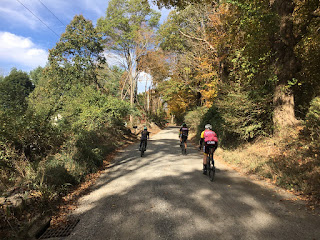 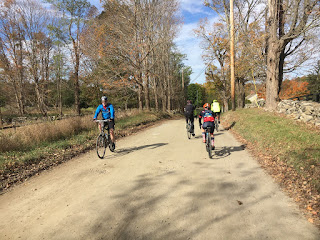 While riding back on Baxter I struck up a conversation with David Schwartz from Mahwah, NJ and we stuck together all the way through Mountain Lakes park. There was another fellow hanging with us that I didn't get his name but he was wearing mountain biking kit with Long Island logos so I asked him if knew John Young. He did and said John was here. Little did I know but John was about a mile ahead of me the whole time. 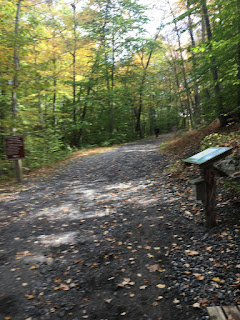 The gravel road in Mountain Lakes Park was greatly improved 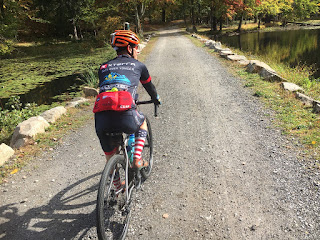 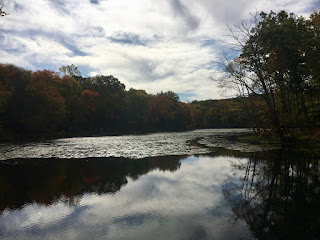 The fall scenery was awesome 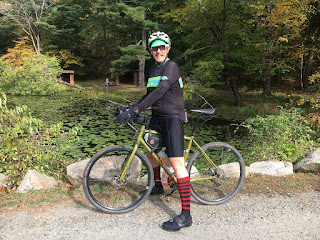 Dave took this one of me 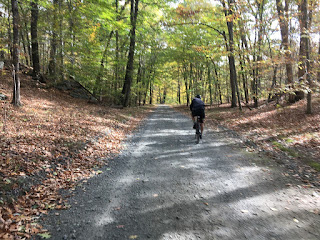 Then we started climbing again 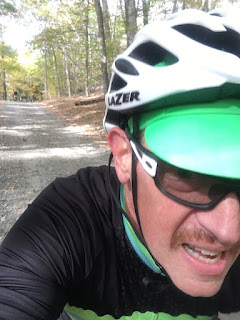 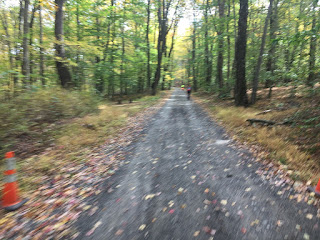 The climb up Mountain Lakes Road maxes out around 1,400 ft, same as Hunt Road and on the route they are pretty close to one another. I am slow climber and after awhile I lost sight of Dave and in fact never saw him again until the end of the ride. The next rest stop was at Ward Pound Ridge Reservation.  Of course there was a bucket of pickles along with bananas, oranges, bars of various sorts, plenty of cookies. 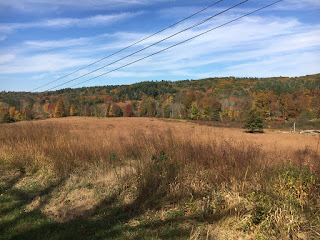 On the way out of the park is when I came upon Donna DiCacco and she was riding her first Gravel Grinder. We rode together for bit on Route 121 but then I headed off on the Metric Century route while she was riding the half metric century. 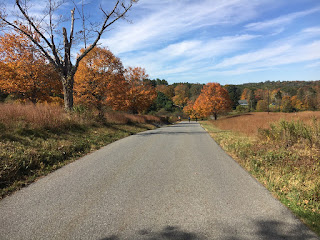 Rounding a bend on Twin Lakes Drive in Bedford I met up with John Young. He was stopped and taking a picture at a palatial estate up on a hill and I didn't recognize him at first but then I turned around and said hello. 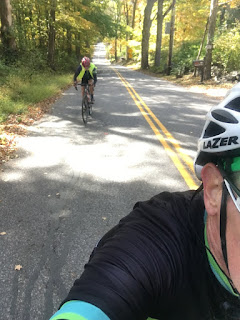 Heading north from Bedford we tackled some pretty steep hills, one of which was Indian Hill road. It had an average grade of 8.5% for a half a mile. 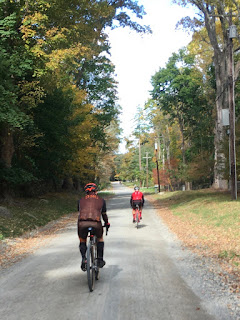 John and I had just stopped at the final water stop when who of all people show up but Fred Harris!  Fred was riding with friends from NYC and John and stayed with them till the conclusion of the course. 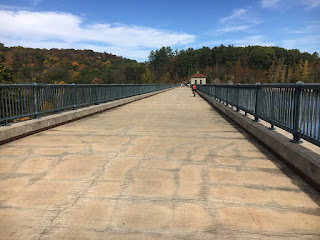 We rode over the Cross River Dam 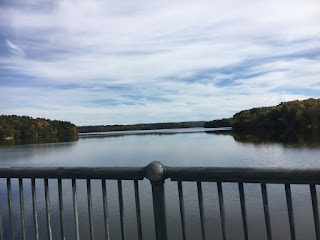 Righter after 9/11 the route over the dam was closed but apparently it's open again. 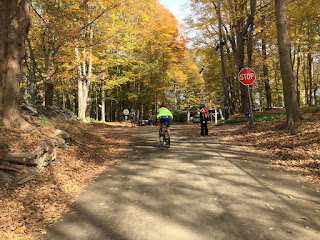 The last serious climb on the route was on Mt Holly Road.  There was a 12% section followed by another 8% grade.  At the top there were people cheering us on and directing traffic.  From this point, it was 5 miles to go that was mostly down hill and flat riding! 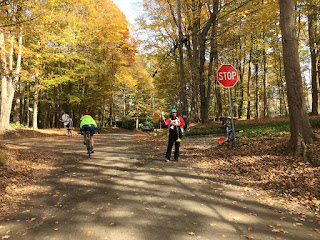 I finally met up with Steve who was attired in more Laser Cat kit.  Steve told me that he is launching his own energy bar, which I have had plenty of already, while riding with Steve a few times.  The bars are so much better than what you can purchase commercially right now and can't wait for his product launch. Might have to head down to Philly for it and some riding. 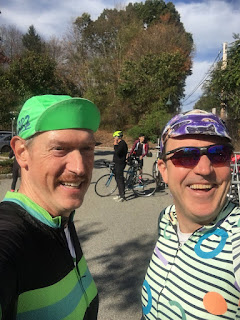 What I didn't know was that there was food after ride.  There was soup, chili and wraps! 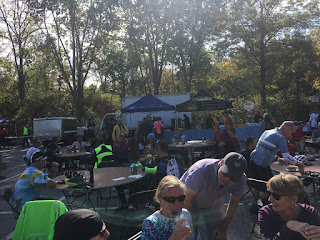 Afterwards, John and I headed over to my car where he chatted some more and drank beer!
That was an awesome ride and I can't wait for next year.