Rough Road Ahead: Tighten your bra strap and remove your dentures (F2G2)

If you rode F2G2 last year then any threat of rain would probably make you a bit nervous. I think the first time I did the ride in 2014 it rained in the morning but that was nothing compared to what it was like last year (2018 post: I got lei'd at F2G2). This time around there was some rain in the forecast today but it was a 20% chance starting around 2 PM. Otherwise, the weather at the start of the ride was your typical fall day in New England, overcast and in the mid 40s. 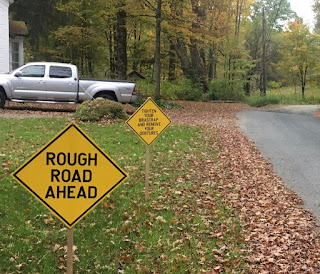 This year's ride had a big change in that it wasn't starting from the Cantebury Farm, rather the Tyringham Fire Dept pavilion and the route mirrored the 2015 route.  I have a Google Map of all the routes:  Fall Foliage Gravel Grinder Routes. I spent the night before at Will's place in Spencertown, NY and the drive over to Tyringham only took 25 minutes.

Naturally, today's ride started off with climbing George Cannon Road, which is 1.5 miles log and has an average grade of 8%! Hitting it right out of the gate took the chill out of you at the start of the ride. 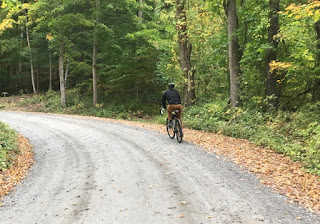 We started out riding with Eric, who I have ran into at various Gravel Grinders in the area and whom I know from Instagram but he's fast and he was gone. 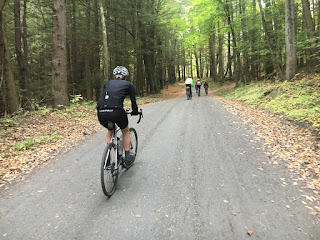 Will is a fast climber and in no time he was gone, too. 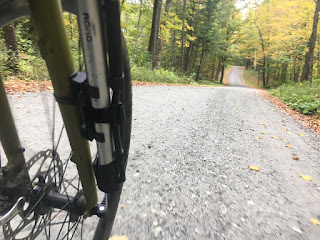 I am a slow climber and soon I was all by myself. I caught up to Will at the intersection of Goose Pond Road and then we were off again.

While on Goose Pond a rider by the name of Dave, who was from Sudbury, joined up with us and stuck with us throughout most of the ride, until we lost him in Southfield. 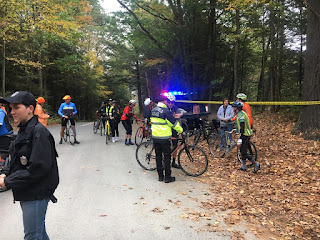 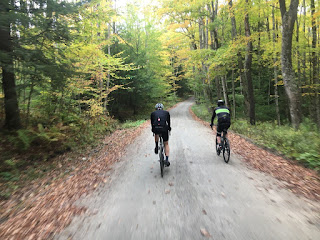 The night before there was modification to the route and a bypass to Viets Road was added. Viets Road was the only part of the route I have ever walked. The bypass, however was no walk in the park either.  It was 1.5 mile climb with an average 5% grade. 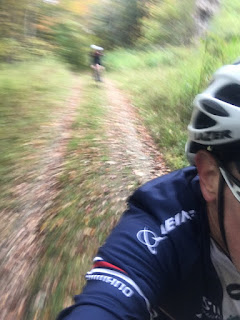 A little dual track before next rest stop at York Lake. On this part I ran into Fabian Esponda. 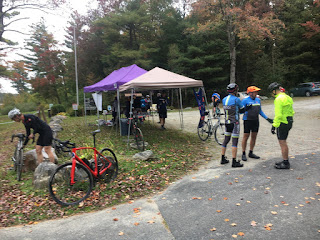 At the next rest stop it was the rest of the Pittsfield High School Girl's Track Team. The emphasis at York Lake was the New England Patriots. Here I also ran into Laura Kelly and Gail Harris, who I met (in person) at the Ashford Adventure Ride last month. 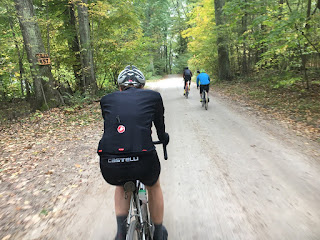 We got back on the bikes and as luck would have it there was a mist in the air. At this point I was wishing that I brought another set of gloves, like the waterproof ones that I left in the car, and maybe a jacket.  The mist got heavier but with all the climbing we were doing I never got cold.  Dave had gotten ahead of us but we met up with him at the intersection of Rhoads & Bailey and Keyes Hill. 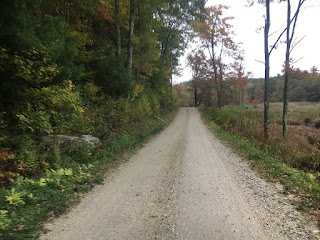 At the top of the hill, though, Will asked what happened to Dave? I thought he was right behind us. Will thought with the rain that maybe he decided to bail and ride back to his car. 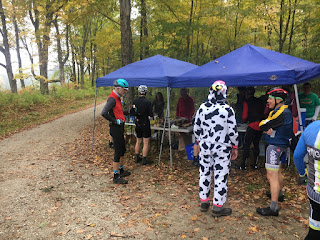 By the time we got to the last rest stop it was indeed raining but there was nothing that I could do. Ironically, however, I really didn't feel cold. As we were getting ready to leave Dave showed up. He thought we had a mechanical or something but it turns out when we caught up to him at that intersection we didn't recognize us. 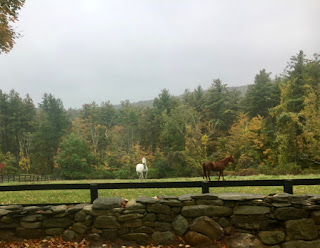 Even though it was raining being in the woods lessened its impact.  More climbing helped to keep warm, too, and there was plenty of that going around. 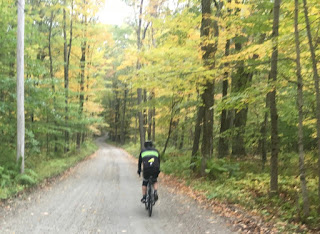 There was one last really big climb that led us into Beartown State Forest, called Fairview Road. It was almost a 3 mile long climb at an average grade of 5%. No fear of getting cold because of the rain, now. In fact, it had stopped all together. 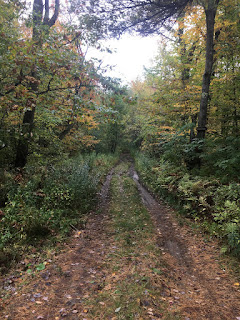 The last jeep road/dual track trail before the final few miles back to the rest stop is called Brace Hill Road and this year there were very few big puddles. There was some mud though.  Last year my brakes were shot and I had to drag my boot on the ground to slow down. Not the case this time. 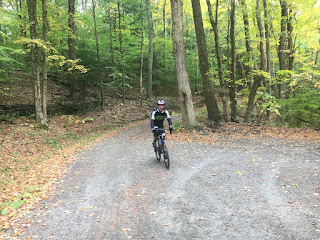 I flew down the trail and then waiting for Dave and Will.  Dave came shortly but Will was a bit longer. 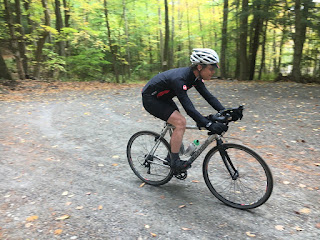 Five more miles and we were done. After changing, Will decided to leave.  Dave had changed pretty quickly and went down to the food. I cracked open a PBR and headed down the hill to the food only to learn it was all gone. Guess they didn't plan that aspect of the ride very well. Overall, it was a great ride. 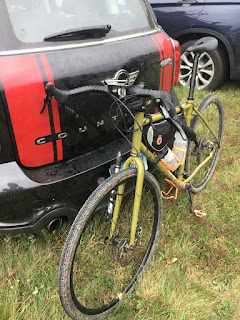 Hopefully there will be another ride next year. Starting from Tyrningham like they did this time around there are plenty of roads to travel. It would be great to see a route in the opposite direction sometime. That's something that never happened.
at 11:11 PM