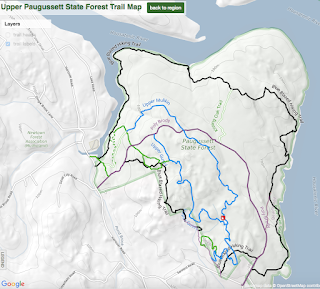 ViewRanger, on the other hand, works off line and it lets you down load maps for particular riding areas, too. 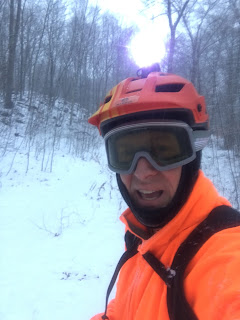 It was around 15 degrees and I wore my Windstopper Polar Fleece hunting jacket with just a long sleeve shirt underneath and I was still sweating.  In fact, nothing was cold.  I had my light on as another precaution for hunters but I had the forest to myself. 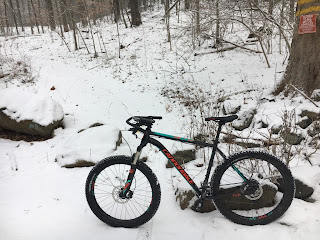 After the Unmarked and Unsanctioned Trail, I continued down the Gussy and then onto the Reach Around is when I noticed that my front wheel was getting a little dishy.  I stopped for a Charmin Tire Squeeze and noticed that I had lost a lot of pressure in the tire so I slowed down and rode out of the forest a lot slower than I would normally have ridden.  I rode a little on Sanford Road towards home but there wasn't enough pressure in the front tire and while the snow provided some cushion it wasn't going to help so I decide to walk the half mile back to my house.