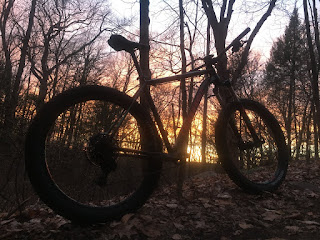 I got home later than I wanted to on Monday but figured there would be enough light for a quick ride in the forest. This would be an excellent opportunity try out my new helmet that I got from Brookfield Bicycle Center, a Giant Rail Helmet. Finally found a replacement for my old Giro MX & Fox Helmets. I really love it because it has plenty of vents, a goggle strap in the back (perfect for holding my headlight cable), and straps that are closer to the side of your head than my other mountain biking helmets provided. 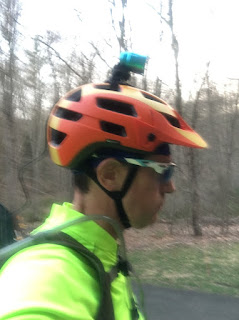 Why is that important? My feeling is that the helmet hold better on your head and doesn't wobble as much.  There are also plethora safety features, too, but if you want to learn about that, just ask Shawn at Bicycle Center to explain them.  That's what sold me on the helmet. 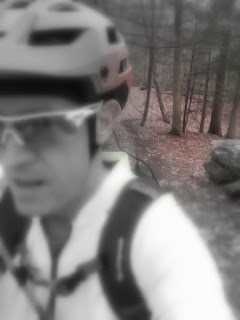 I happened to notice that a fellow mountain biker that I have known over the years recently rode Upper Paugussett and his track followed the route I like to take snowshoeing during the winter but then took an interesting turn. Instead of heading down to the Mulikin his track went up an old skidder path that I used to ride back in the day that intersects with the Purple Trail and the Mulikin. 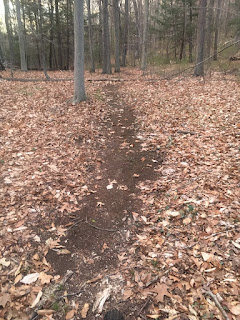 Clearly, rather than foot rake this route someone came in with a leaf blower to initially establish this illegal trail.  However, as I continued to ride it appeared that someone had blown all the trails. While you may think you are doing everyone a solid you are actually eff'ing up the trails. The reason why the Gussy drains so well and you can usually ride it a day after a big rain is because of the leaves on the trail.  Leaves act as a moisture barrier that helps keep water from soaking into the trail. 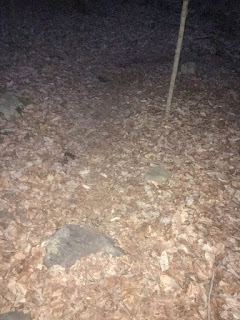 Now that there are no leaves, it leaves the treadway exposed to soak up all the water from each rain. In the picture above, this is how the trail should look. You can still see where the trail goes by leaves that look flattened as opposed to those on the either side that aren't. So, now I would say that after any rain you should wait at least 2 days for the Gussy to dry out. Of course riders in this area won't care and don't have the patience to wait a day or two to let the trails dry out, so they are going to ride anyway and that's going to make these trails turn to mush, like what is happening on the Mulikin Trail. 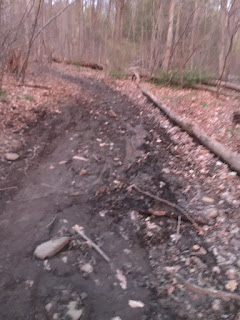 Speaking of the Mulikin. First and foremost, you should stay off the Mulikin in the spring.  The only time it should be ridden is when the ground is frozen or when it's bone dry.  That means winter (only if the ground is frozen or there's at least a few inches of snow on the ground) and summer.  I put it out on all the Social Media sites that it is a closed trail but it appears that I am not getting through to everyone. I need to go in there and put up some signs now. Hopefully people still have some common sense and will stay off the trail.

In case you don't know what or where I am talking about, above is a map of what I call the Mulikin Trail. It's the single/dualtrack that everyone rides to avoid riding up the forest road to the trails.  We'll see how long they last. No matter what you used to think about Upper Pauggussett being well drained, it is no longer that way due to Mr Leaf Blower. 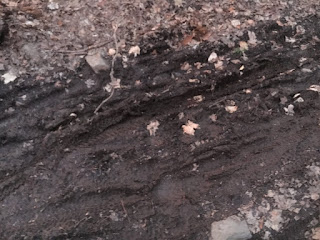 You guys should know better than to ride through this! This is a freaking travesty! Through your carelessness, this trail stands to get shut down by the DEEP.  It's not an official trail so the DEEP can do what they want with it. If they decide they are going to block it there is nothing anyone can do. I am currently trying to persuade the State Forester to let me do a re-route so it doesn't come to that and we can keep this trail open. What I don't need right now is to see anymore of these stupid shenanigans and mountain bikers who think they are entitled to do what they want because this is public land. Sure, its public and you can access it but it doesn't give you permission to build anything you want. 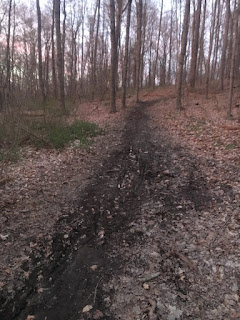 After treading lightly through this section I got back on Fat Amy and rode over to the Gussy Trail. The Gussy was blown, too, and quite a few sections of the trail were really soft.  When I got to where the Hornets Nest used to be I noticed a new development that made me even angrier.  Someone built a jump!  WTF?  Don't you guys know that you don't build that crap on State Land?  Go build in your back yard if you are looking for a quick thrill but not here on the Gussy Trail. 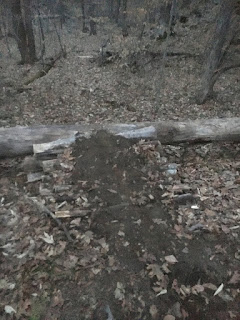 This has got to go and this crap has got to stop!  Who ever is doing this crap has to realize that you are jeopardizing the future of mountain biking at Upper Paugussett State Forest. I have already been called by the DEEP on the new trail that comes off the Gussy. I have also heard through other channels that the state is concerned about whats happening here and that could lead to additional closures. This has got to stop. Next time I am in the woods I will be dismantling this jump and going to have this tree cut in half so that who ever built this can't do it again. 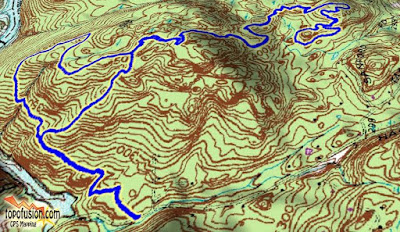 On my way out, I took the horse trail off the Gussy and then rode this purple blazed trail that I think some hiker built illegally. It too has issues, namely a fall line climb and it goes through a wet area at the base of the climb and then uses an intermittent stream bed for the trail.
at 8:41 PM