Waking up Saturday morning to a brisk wind and light drizzle I said to myself, no way am I going to ride before my son's 8 AM Soccer game.  The weather during the game was even worse but by early after there was a break in the weather so I jumped on the CAADx and went exploring. 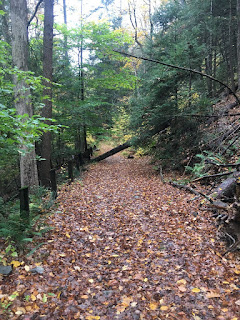 Thinking that it was going to be raining the whole time I went out with my neoprene gloves and rain jacket but quickly shed both after I jumped off the old NY & NE Right of Way onto Al's trail.  It's funny, how in the past I would only ride my mountain bike on this trail and now all I do is ride it on my cross bike. 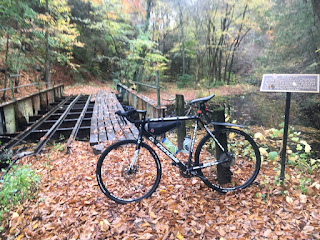 Heading down old Black Bridge Road I noticed that it appears to have been widen, perhaps by some 4x4 usage but anyone driving this way would simply have to back out once again due a pretty sizable widowmaker laying across the road.  the Black Bridge looked pretty sketchy being wet and with some leaves so I walked it instead of riding it. 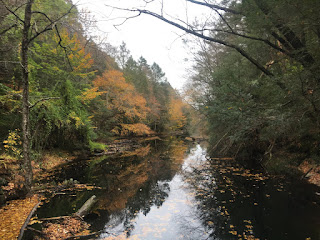 After riding the grassy paths through the backside of Fairfield Hills I rode up Point of Rocks and then headed over to Bentgrass Lane.  I had seen on a map that there was a trail connecting the two lanes and if it was rideable it meant new possibilities for my Newtown Dirty 30 route.  Sure enough it is actually a nice dual track trail for the most part and easily rideable on a cross bike. 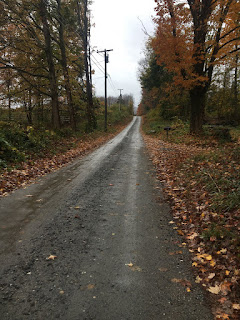 I wanted to do more but I was running behind and only had time to ride Beaver Dam and Ox Hill. Once I turned onto Hattertown it was time to head home.  Now with the connection through Bent Grass it changes all the different routing possibilities to ride as much dirt as possible in Newtown. 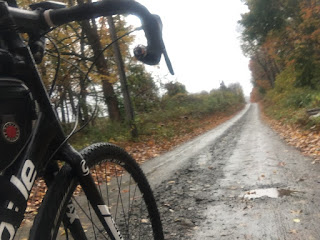