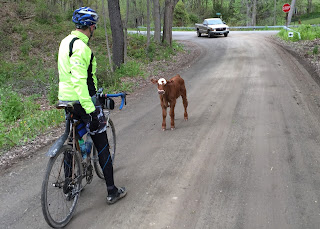 After much anticipation it was time for the Farmer's Daughter Gravel Grinder.  I had been wanting to do this ride last year when it first started but I had been busy and couldn't do it but this time was perfect.  Staying at Will's country home next door in Spencertown, NY was key and the warm ride the prior day set the expectations high for this ride. 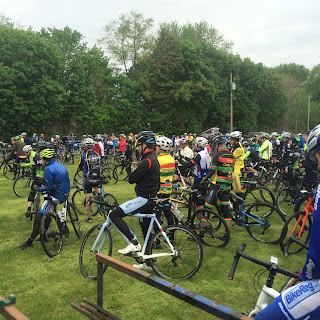 Compared to some other events, not including the D2R2, the Farmer's Daughter had quite a turn out. 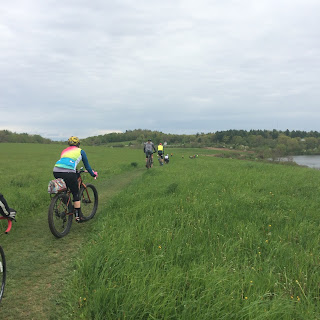 However the routing of this ride was somewhat less desired.  There seemed to have been quite a bit of mountain biker influence into planning this route which meant there was some singletrack.  In fact a lot of singletrack and in my opinion, too much singletrack.  Add to that the wet and cold conditions, made for really muddy experience. 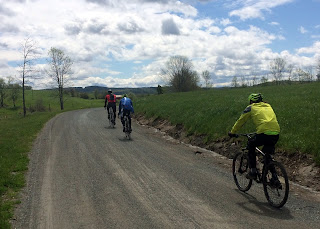 The gravel roads that were on the route were great and combined with the bucolic scenery made that portion of the ride much more enjoyable. 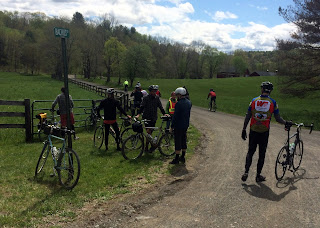 The roads leading up to the first rest stop were pretty tame. The weather was holding nicely and despite the singletrack sections the ride was still fun and enjoyable. 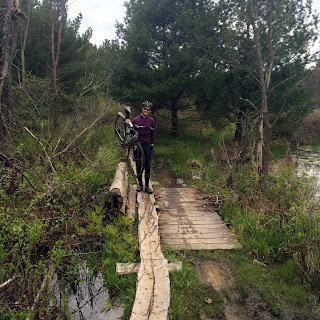 The singletrack leading up to the lunch stop was particularly brutal and muddy prompting us to walk this part of the course because of the conditions.  Somebody from Connecticut crashed and was headed back to the start with one of the Sag wagons.  At the lunch stop, the weather changed and it started to get colder.

Lunch was in a nature preserve and there was plenty of good food.  Sandwiches, potato chips, and plenty of drinks. It was just as well, because after lunch is when the real climbing began. 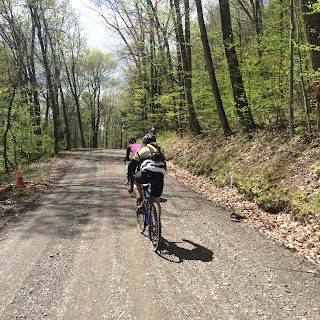 Schilling Crossing and Tunnel Hill were the two hardest climbs on the route.  The first one was a long steep grind with a grade maxing out at 12%.  Then the transition to Tunnel Hill was wall with a maximum grade of 16%. 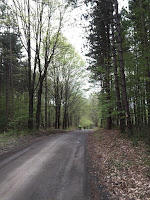 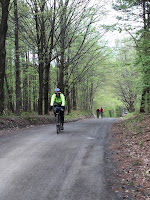 The last big climb of the route was Dean Hill and it too had some stretches with some incredible grades also topping out at 16%!  After the last climb there was an ice cream stop which given the colder temperatures was not all that enjoyable. 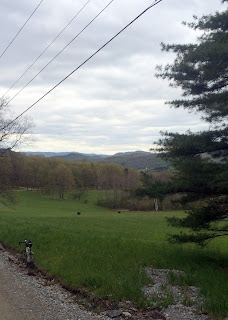 Descending down the other side of Dean Hill was a blast and rode into a corner of Massachusetts.  Then, while climbing up Red Rock Road, back towards New York, I cramped.  I took a break and then continued on but the cramping would plague me throughout the rest of the ride.  At the last rest stop is when the temperature plummeted and it actually started to snow a bit.  I was seriously thinking about giving up but pushed on.  We bagged one singletrack section but still climbed BeeBee Hill.  I walked quite a bit of it but Will cleaned it and it had some really steep grades in it. 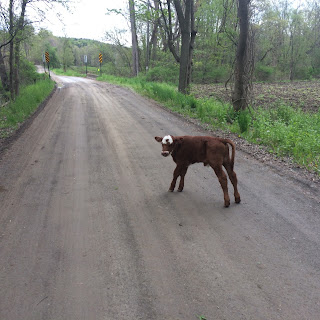 I limped along the dirt roads through the back side of Spencertown and into Chatham and it was probably 10 miles out from the Columbia County Fair Grounds, where we started, where we met up with this little doggie. He was really curious and came up to me to check me out.  I didn't think it was safe for him to be running around free so we coaxed him back to the farm where we thought he came from and then continued on.

Despite the cramping and the cold weather the only real detractor for the Farmer's Daughter, I think is the singletrack.  There are a lot of dirt roads up there that the organizers could have used that would have made the use of the singletrack unnecessary.  Not to mention, what happens when 300+ cyclists coming tearing through a trail system, nothing good that's for sure.  The beer at the end of the ride was good but they ran out of Farmer's Daughter so that was a bummer.
at 11:05 PM