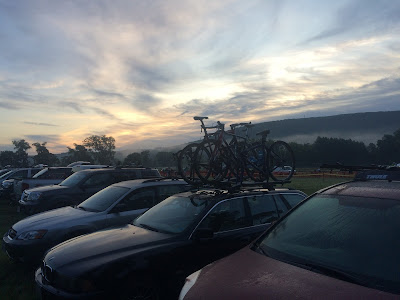 Will and I spent the night before in Amherst because if you are going to spend 10+ hours on a bike you need to get an early start.  We got to the starting point at 6 AM and the sun was still below the horizon but the activity at Mill Village Road was in high gear! 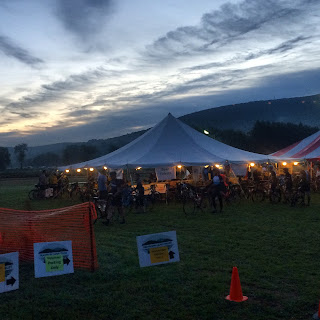 D2R2 is the biggest and best Gravel Event in the Northeastern United States by my recollection.  But don't take my word for it, here is the testimonial from thousands of riders over the years:

The Deerfield Dirt-Road Randonnee was conceived in the 1990's as just a favorite dirt-road loop in the hilltowns of Franklin County, Massachusetts. Since its birth as an organized event in 2005, many have hailed D2R2 as the hardest, most beautiful, most fun, most traffic-free, most unique, and overall best ride that they have ever done.

And the Date has been set for next year and I already have it on my calendar!
D2R2 - THE DEERFIELD DIRT ROAD RANDONNÉE:  AUGUST 20, 2016


Here is my ride report:

After registering and picking up swag it was time to get to pedaling.  Will and I rolled through the starting gate a little after 6:30 and you couldn't ask for a more perfect morning.  Just warm enough so that arm warmers were unnecessary and not really foggy either.


It seemed for ever until we hit some dirt, however, riding on the pavement made for a nice warm up. With the exception of one big climb up to Steady Lane Farm and the first rest stop, the first 30 miles felt like a gradual climb in elevation. 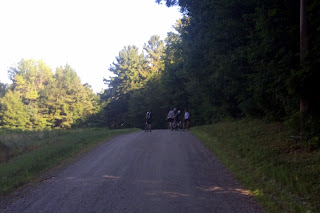 Along the way we met other groups of riders and rode with them for bit and further in to the course we found others that were more our speed and hung together a bit, too. I met one guy from Brattleboro named Bernd and it turned out that we has originally from Germany. Knowing a little German myself I think I was able to hold a pretty good conversation with him.  We crossed paths many times throughout the entire ride. 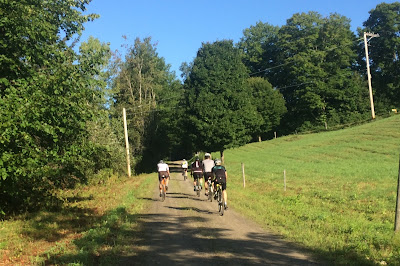 The first 30 miles of the 180K is the Honeymoon 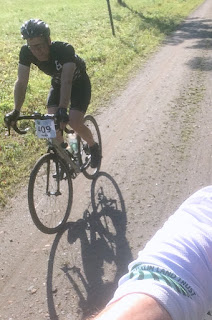 Following the first rest stop did it start get really interesting.  We were still climbing gradually into Hawley knowing full well that the first major descent would be E Road. One the reasons Will and I decided to do the 180K Route was because we already road up E Road on the Greylock Gravel Grinder in June and going up that hill once in one year suited me just fine. Descending E Road down into Charlemont was a blast.  I don't think I have ever descended in the dirt that fast before.


The first signature climb on the 180K route is Harris Mountain Road heading up into Heath from Charlemont. Pedaling up that will was incredible and I felt guilty saying to myself that I was thankful that it was paved.  In some sections the grade hit 19% but it was the sustained length at these extreme grades that made it so painful.  At the top was the second rest stop and we caught up with some of Will's friends from the NYC cycling club that I had met the week prior on my own solo Dirt Century training ride in Dutchess County, NY.


The real fun began with the Archambo Road climb, which is nicknamed The Wall. Although minuscule in terms of elevation the fact it has a max grade of 27% was an eye opener. There was a big group of riders ahead of us and by the time we hit the steepest part it was total debauchery. People were tacking side to side really slowly and others were jumping off their bikes and walking. 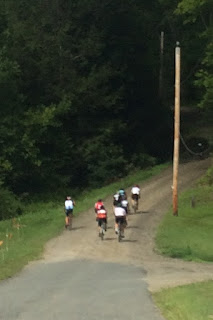 Will salmoned his way through the tackers and walkers and tore up the hill.  I dropped to my lowest gear, scrunched up in the saddle to keep my center of gravity between the wheels and slowly but surely, ground my way up. At various times I was pedaling along side some people walking just as fast. I made it without walking.  Now I need to head back to North Kent Rd No. 1 and try that hill again!


The next big climb was Hillman Road. According to the cue sheet it is purported to be the hardest climb course on 180K and I think I would agree.  Again, Will powered his way up and I did what worked for me and got it done but it was indeed brutal, Some say it's the hardest climb on the 180K course but others contend its Patten Hill.


The last climb before lunch is Franklin Hill and it's a climb that I have done before when I did my first D2R2 two years ago. After 50 miles, its the first time you start seeing riders from another course. According to Strava, the first part of the climb tops out with a max grade of 17% but after the switchback, which provides a brief respite in the middle of the hill there is another insanely steep section with a max grade of 19%.  Then, it's a long 6 mile descent down to the Green River Covered Bridge and lunch! 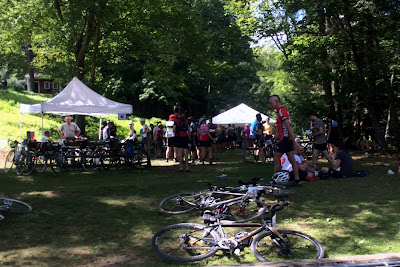 The lunch line was huge! Apparently, there were individually made wraps which was slowing things down quite a bit.  There were no pickles to be had at this point and the pickle brine jug was almost empty but I did get a cupful which hit the spot.  Next time I bringing my own pickles! You were able to jump ahead to get sodas and other self serve items but if you really wanted a wrap, you had to wait. 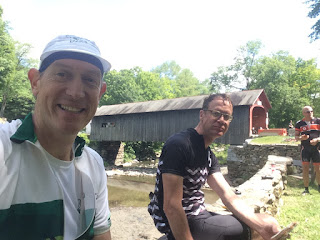 I think it would be been better served if the wraps were made ahead of time and there should have been a separate line for special orders and such. I did run into Andy Engle, who I have crossed paths with before riding around my neck of the woods in Newtown, Roxbury and New Milford, he was on the 180K course, as well and like me had GPS issues later down the road.  There were quite a few people riding today that I knew through various social media venues, including a guy that lives around the corner from me and holds just about all the KOMs in my area.  I think I saw Chris heading out around 6 AM.  I also saw some of the Rad & Gnar riding team from the Vision Quest Gravel Grinder I rode in Eastern Connecticut earlier this year.  They were riding the 100K route. After lunch, there is a really steep climb up from the Covered Bridge and with a full belly and a lot warmer temperatures made for a really slow grind. 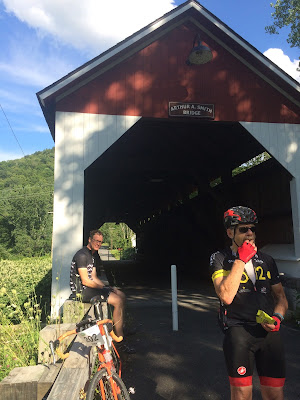 The route after lunch took us on a reverse of course of what we rode last year on the 150K and when we turned right onto Simon Keets I was immediately reminded of the descent on that Jeep Trail down to the road in which it was mountain biking 101 where you just have to hang your fourth point of contact off the back of the saddle and roll it.  Only, we passed by and climbed Alexander Road. 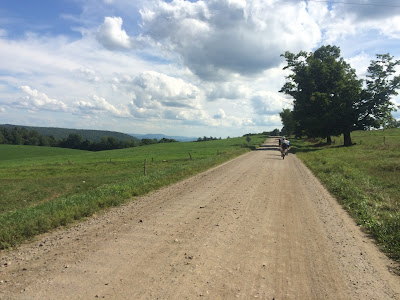 We met up with the group of riders at the covered bridge on Lyonsville Road that passed us right after lunch.  Someone in their group had to change a flat.  We found that nearly all the water that was left was almost gone but if it was out I am sure someone along the road would let us fill our bottles. Will and I drank and ate up knowing full well what lie ahead, the last big climb of the day, Patten Hill Road.
The first 100 meters of Patten Hill was newly paved but it was still really steep and the higher you went, the steeper it got, upwards of 13 to 14%.  Looking at Strava it averages out to 8% over the segment distance and while Hillman Road, on average is steeper, Patten Hill is almost twice as long and I can see why some think it's the toughest climb of D2R2.  While I was grinding my way up the hill I recognized Mike Robinson from Bethel, CT with whom I have communicated before through various social media outlets but never face to face.  Of course it had to be on Patten Hill after nearly 100 miles of cycling that we meet!

What an irony it was to meet two readers of my blog on one the toughest climbs in Massachusetts. At the top of Patten Hill was the last rest stop and the water was cold, the M&Ms were outstanding, I passed on the watermelon due to food allergies but dove into the Pickle Brine! 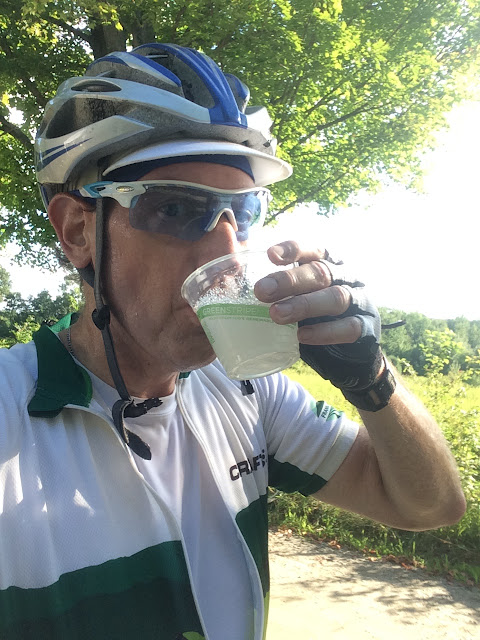 After the rest stop the route seemed to follow the reverse of the 100K route from 2013 when I did my first ride at D2R2.  At the bottom of Cooper Lane is when my Garmin died!  No low battery warning this time, it just up and died on me.  I turned on my Strava and continued riding but all of sudden realized that I was riding blind, so to speak.  That's why I always bring the cue sheet, however, without knowing the distance I had to rely on signs and read ahead for the turns.  Fortunately, Will's Garmin was still working and had the route in it. 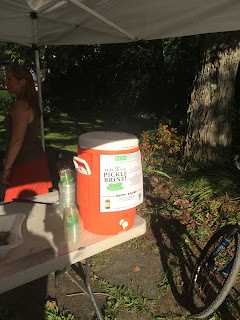 I vividly remembered Hawks Hill Road and it was just as rough as it was 3 years ago but with my 700x40c Schwalbe Land Cruiser tires I was still able to bomb through it.  Finally we were on Upper Road and picked up the pace and finished the ride in 12 hours and 12 minutes!  That was a long day on dirt!