Will and I decided this year we would ride the 180K D2R2 course and to get ready for it we rode the Wassaic Edition of the Dirty Dover Gravel Grinder, which is 100+ mile course encompassing the dirt roads of Dutchess County, NY and Skiff Mountain in Connecticut.  This course covers most of the original D2G2 course that Will and I road last fall only in the opposite direction.  It also has what I would call some signature climbs that are extremely challenging. 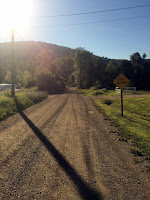 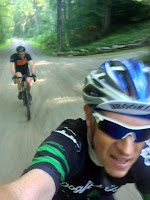 I had seen a few tracks on Strava recently, that showed people were riding through on Lambert Road even though most maps show that this road doesn't go through.  Turns out its a seasonally maintained road and since it runs from NY into CT one or the other state doesn't recognize it as a through road. We rode the entire length of it and it's challenging climb, as well. 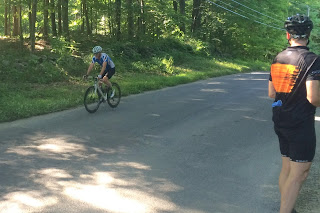 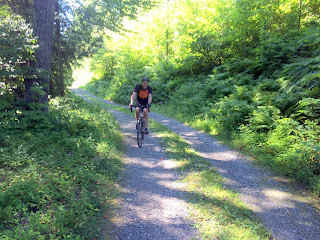 After bombing down Skiff Mountain Road and hitting speeds of 45 mph we turned down River Road in Kent.  This is a two mile road that parallels bot the Housatonic River and the Appalachian Trail but the please be wary of the hikers because you will see a lot of them on this road. 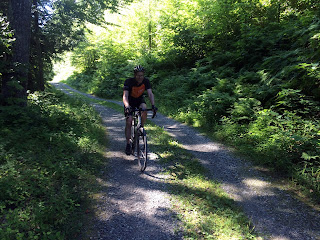 Turning north on the only road coming off of River Rd is North Kent Road No 1.  It's a loosely maintained gravel road with some incredibly steep sections and that go on and on and on. According to Strava it's a 579' climb at an average grade of 11% for a mile.  It is surely a challenge to be reckoned with in this part of the state.  Due to the lose surface, combined with the steepest sections both Will and I had to walk parts of it! 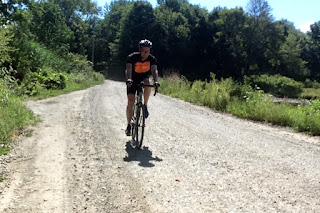 You come out on the lower section of Skiff Mountain Road and start climbing yet again until you come to Modley Road, which starts at the Sharon Town line, and is dirt.  There is a sign warning of you of a horse and buggy using this road and the three times I have ridden through here, now, I have always seen it. 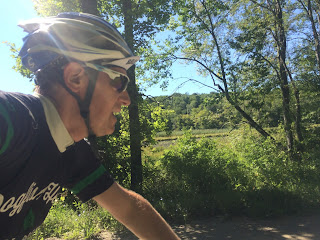 Westwoods Rd No 2 is a wonderful dirt road that I have never ridden before but have wanted to.  It starts out flat and goes by some wetlands and a pond and then starts to climb again.  Then there is a fast descent into a paved intersection and then you turn north on Westwoods Rd No 1 which quickly turns to dirt again. 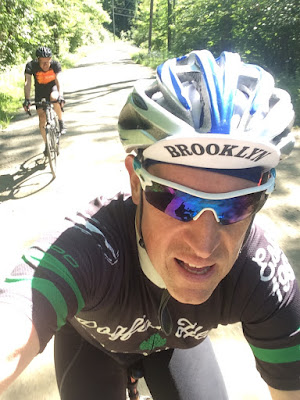 This is a four mile descent down the backside of Skiff Mountain and eventually you wind up back in NY. 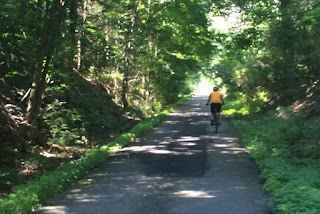 To get back to Amenia and the first food stop at the Cumberland Farms we took the Harlem Valley Rail Trail for a few miles. 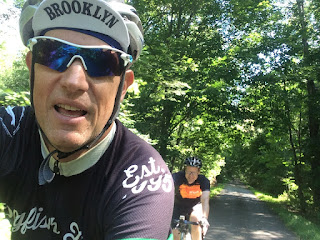 We had a lunch at the Cumberland Farms in Amenia which has a full range of food including deli items, perfect to recharge after 36 miles of riding and 1/3 of the course completed.  From here, we headed over to Cascade Road, which is another climb that I have been wanting to ride for some time now but just never figured out how to include it in a ride.  Starting this ride from Wassaic really was key. 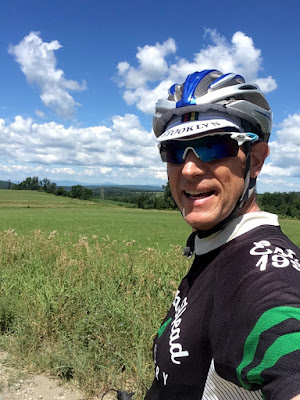 Cascade Mountain Road is a nearly 600 foot elevation change over 1.5 miles and an average grade of 8%.  On the other side you descend into some farm lands that open up to a great view of the Catskills to the west. 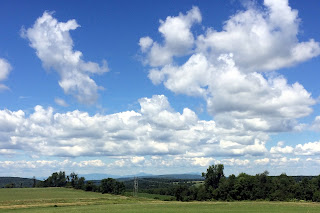 From here we rode dirt on Pugsley Hill, Fraleigh Hill, and then down Kennels Road where they actually still do Fox Hunting on horseback wearing the whole red coat get up.  Last fall, Will and came across of group coming back from the hunt. 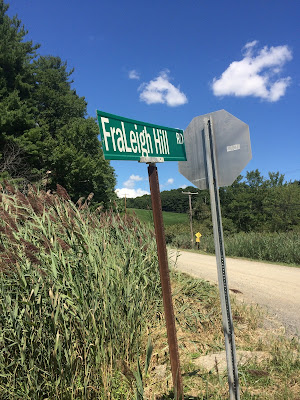 We continued to work our way west towards the Taconic Parkway and most of the route was strangely familiar because we rode it last fall, only in the other direction.  It's funny how you remember some sections and not others, especially the really steep climbs that you bombed down and never gave any thought of what it would be like to ride back up them.  Now, those thoughts were coming in. 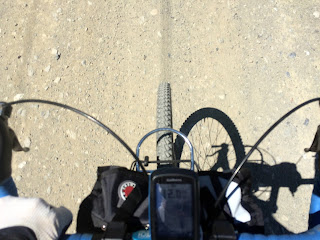 By midday it was also noticeably hotter and appeared to be taking it's toll on Will.  After what happened at Greylock and my cramping, I wasn't taking any chances.  I was drinking Poweraide the whole time, every hour having a Slim Jim, and even brought pickles with me. 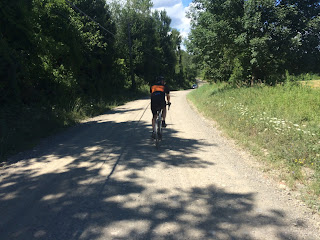 As we were riding down from Woodstock Road we found that one of the roads on the route wasn't dirt and led into some institute that we ended up by passing and heading down to Rt 44 where we road down to the intersection with Route 82 and found Quik Mart! 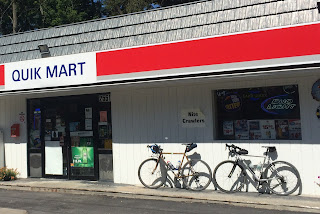 Time to fill up our bottles and recharge with calories for the next 40+ miles to go on the ride. 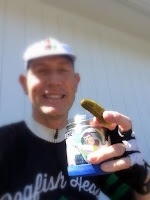 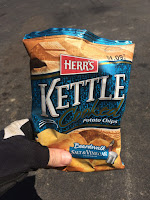 I broke out the pickles and also got a bag of Salt & Vinegar potato chips to ensure I didn't have a electrolyte deficiency.  We were parked in the sun and while it would have been nice to be sitting in the shade the hot sun actually felt good. 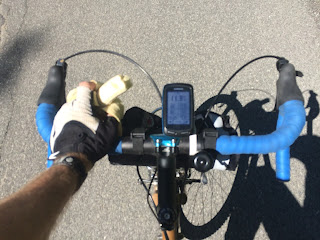 Winding our way through Millbrook and picking up the route again, we began a 10 mile climb with another 1000 foot elevation change up to the top of Hammond Hill.  Six to seven miles of this route is dirt but it's not insanely steep so it's one of the those sections where you are JRA on dirt.  The descent down the east side of Hammond Hill is extremely fast and I would recommend not going too fast because there is a hard, 90 degree turn in the middle of one of the really steep descents.  It was scary. 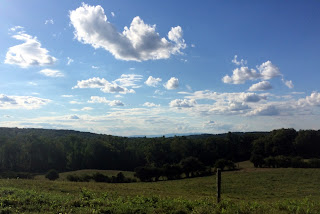 Dropping back down into Dover Plains we hit the last rest/food stop at Rennys to rest and recharge before hitting Butts Hollow.  The initial climb is a 13% wall but it's paved and while it looks steep, its short and easy.  Climbing the Butt is challenging, though, and really long.  When we rode here last we came down through Butts Hollow and climbing back up was a whole new experience. 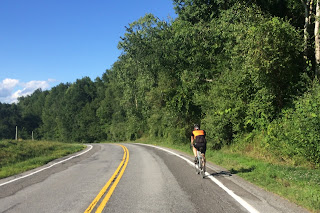 Butts Hollow spills out back in Mabbettsville and from there we rode along Route 44 a bit with some more fantastic views of the Catskills and then we turned onto Tower Hill Road. 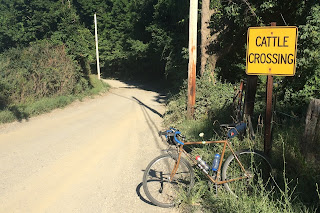 Tower Hill is the Dirt Road from Hell.  In either direction, it's a climb but coming from Route 22 it's a really tough climb.  It still gave us a run for our money because by this point, at 90+ miles, we weren't bonking but thought of yet another 20 more miles was really pushing the needle of my Give-a-Shit meter into the red zone.  I figured we could skip the climb up Dark Hollow and ride back to the Wassaic Train Station and still get 100 miles done for the day. 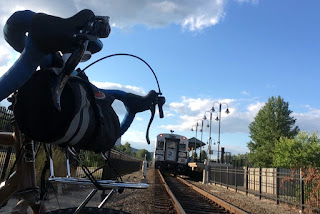 A train had just rolled into the station as we arrived and since the locomotive was in the New Haven Railroad paint schema I rode up the railtrail to get a picture of it and coincidentally broke 100 miles of riding!  Afterwards, we went to the Four Brothers Pizza Restaurant in Amenia for beers and pizza. I was dismayed when they didn't have Chatham Brewing on tap.  Might have to do a little more research on this area to see if there is a restaurant that has a better beer selection. 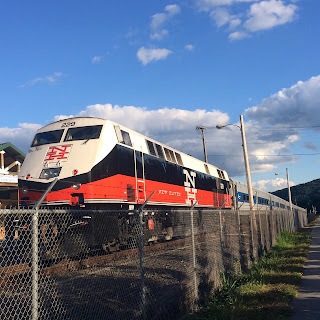 All in all, it was a great day of riding and an awesome route to prepare you for 100 miles of riding at D2R2!