I headed out Saturday afternoon on an unscripted ride, meaning no preset course that I mapped out on RideWithGPS.  I had 4 hours to explore some new areas that I have been meaning to ride.  Today's ride was also the first time I would be riding with the Ventoura Handlebar bag with the customized handlebar bracket that I had made.  Also, it was the inaugural ride on the new Schwalbe tires.

Right out of the gate, I was having issues with my drop outs.  I thought I had it fixed but it just wasn't right.  Finally, I just took everything off and would deal with it when I got home later.  I headed down towards the Housatonic towards Southbury but missed the NY & NE path through winery.  The one thing I forgot to bring were my eye drops.  My eyes were really itchy. 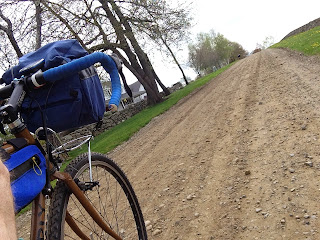 I rode north on Transylvania Road and that is great road to get in the mood for a Gravle ride.  It was a slow and steady climb but it felt good and that's when my Velo Wa kicked, all the stress and anxiety was instantly flushed out of me and I was one with the bike and the road.  I took Rucum, which according to Bing it's supposed to be dirty but it wasn't and then headed over to East Woods.  I stopped at Badger's House but he wasn't home so I continued over to East Grassy Hill.

The new tires were rocking!  Plenty grip and yet roll smooth on the Pave, and no road noise!  I rode 65 psi in the rear and 60 psi up front and they were sweet!  I think they are the best tire yet. 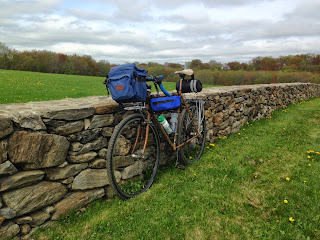 I flew down Grassy Hill and then rode over to Old Roxbury and then up to Lower County.  I remember the first time I descended Grassy Hill, 5 years ago on the Tour de Roxbury and all I remember is the group that I caught up were flying and I crawled at a snails pace.  Today, I flew! 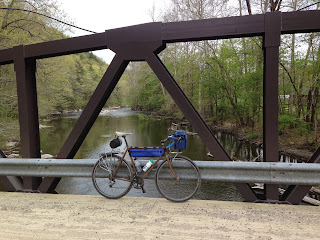 I took Dorthy Diebold to Moosehorn and then cut over to Battleswamp.  I stopped at Judd's Bridge and what I should have done is dunked my head in the river because it was so dusty and dry and my eyes were still bothering me.  The climb up Judd's was slow but worth every push of the pedal.  There were some soft spots that I thought I might spin out on but the Schwalbe's just ate it up!  I took Hartwell down to Shinar Mountain and when the Pave started I took another break and washed my face and eyes.  I also changed glasses and that seem to help, too. 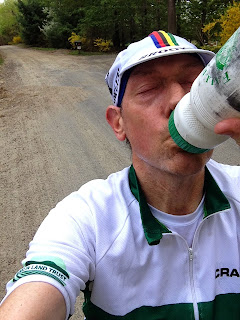 On South Fenn Hill I had my banana, ate another Guu block and finished off my first water bottle.  I go this way in order to catch the Gravle section of West Church Hill Road and then drops into Steep Rock Reservation.  On the descent, I think I might hit 40 mph! 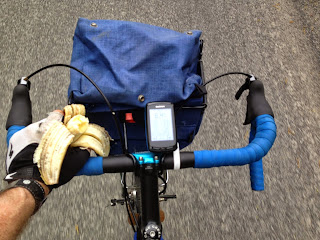 Not a lot of people at the Reservation today which was kind of surprising.  No horses either. 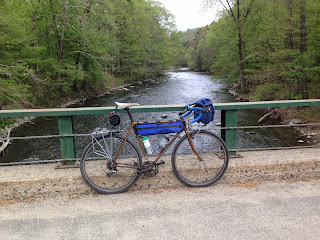 One of the highlights is riding down the Old Shepaug Rail Road Right of Way.  There were plenty of packed go-arounds on the muddy sections but there was really no mud.  There is a new tree down somewhere in the middle but it doesn't block the right of way entirely. 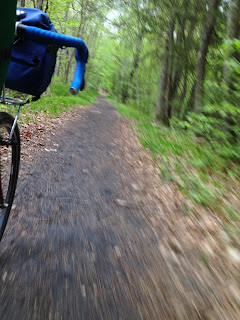 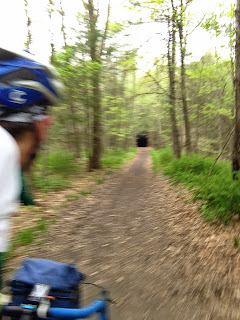 From where I took the picture of the Cross Check (below) you could feel the cold air of the tunnel coming out. 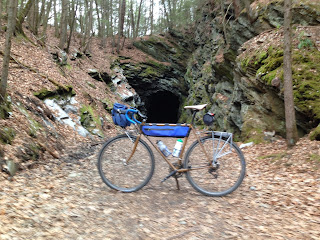 My eyes were doing much better, largely I think due to the different glasses.  On the transition of the Shepaug Railroad Right of Way to the powerline access road, I had a slip in the drops that I had to fix but it took a few seconds to get it right.  That's why I need to go back to some sort of tensioner so this doesn't happen. 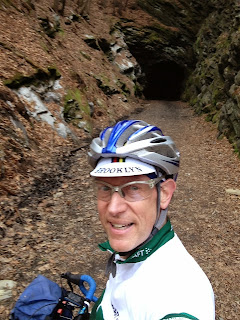 Riding up Judd's Bridge towards Roxbury Center I felt, for the first time, a hamstring cramp coming on so I stopped and stretched it out and then continued riding.  I was going to head up Hemlock but it was getting late and I had to be home by 7:30 PM so I rolled down 67 to River Road instead.  River road was riding nice and then I tried something new and rode up Flag Swamp.  While I wasn't bonking I was feeling tired but kept pushing. 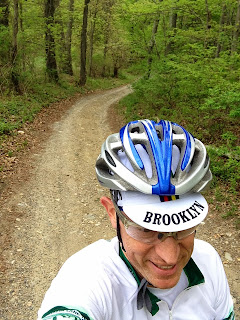 Another new treat was the Gravle on West Flag Swamp.  I can't believe I have been missing this so long.  After the last house it turns rough and there is some short ups on it.  It comes out at a farm and at the Cell Tower turns to Pave.  Next to the cell tower is a red and while water tower and this area resembles a landing strip.  The last dirt of the ride was on Peach Orchard Road.  It had some soft spots and newly laid gravel making it tough in some spots. 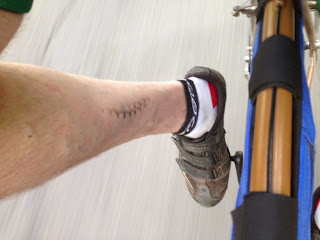 When I got home I was wiped and later had some cramping, even after drinking a bottle of Powerade, three glasses of water and 4 Tums.  I think I need to take the tums before the ride, or it's just ant acids don't really help.