After riding Roxbury Dirt roads two weeks ago in one direction it was time to do it in the other.  On this ride, however, my intention was to ride north tracing the old Shepaug Railroad line as far as one can ride.  From the Shepaug I thought I would check out some of the dirt roads around Mount Tom and Mount Prospect. 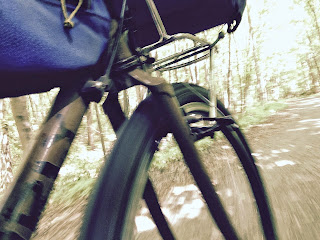 On the map it looked like there was a dirt road that skirted a forest and that you could ride down to one of the reservoirs of the Shepaug, so that was what I was aiming for. 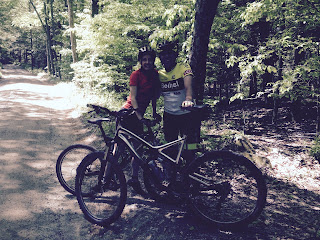 My route started off be reversing the tail end of my Raid Roxbury route by heading up Purchase Brook and then Riding down Peach Orchard to West Flag Swamp and then onto River Road.  By the River Road Preserve I ran into Roland and his girlfriend about to roll out on some singletrack.  We chatted a bit and then we parted ways. 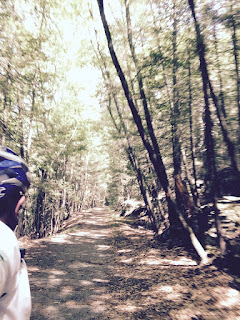 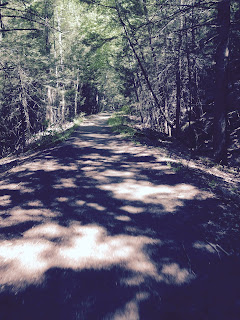 It's so different in the other direction! 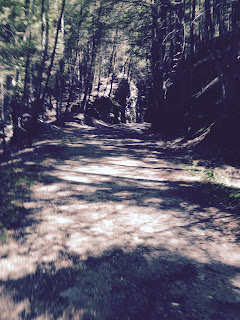 There is no straight view to the tunnel 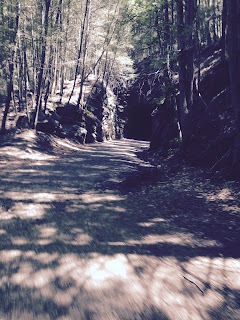 As you round the bend it opens up 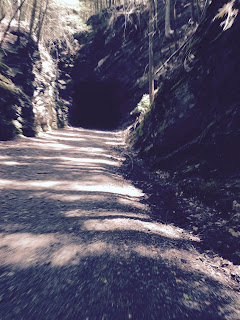 It's unexpected and eerie 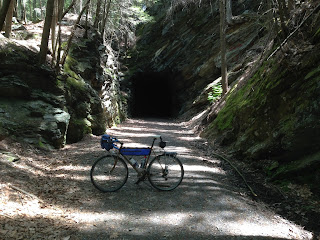 It's shadier looking into the south portal 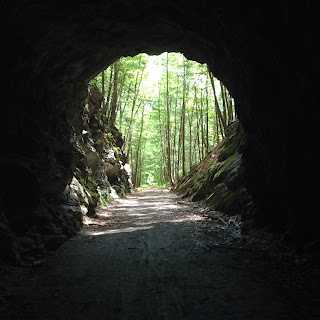 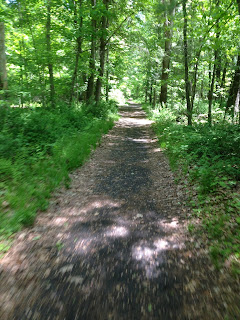 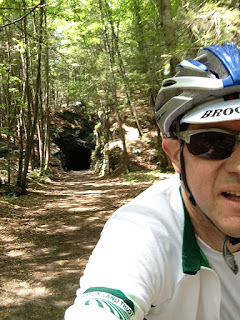 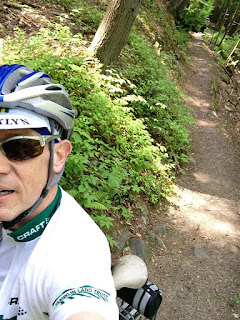 When ever I ride through Hidden Valley I miss the turn and end up on the singletrack along the river.  It's rideable, even for a cross bike but it's also a little hairy. 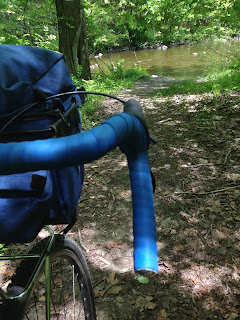 The Shepaug River looked so inviting 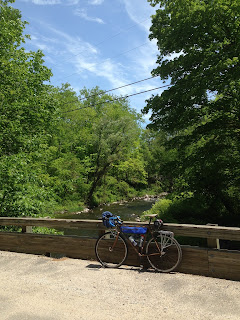 The top end of the Shepaug Railroad bed dumps out at one of the athletic fields for the Rumse Hall School and you can see where the right of way continues but it's clearly posted with No Trespassing signs.  So, I hit some new dirt on West Morris Road.  It's a steady climb and then a fast descent back over the Shepaug.  At the second crossing of the Shepaug it turns to pave. 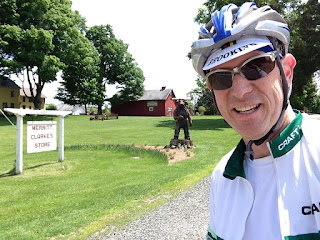 Coming out to Route 202 I stopped at Merritt Clarke's Store thinking it was a general store but turns out they sold clothing.  The girl working there let me fill up my water bottle and it was good that I did because I went through three bottles on this ride.  I need to start planning on bringing at least another bottle, if not two for these kinds of rides, especially if there is no chance at resupply. 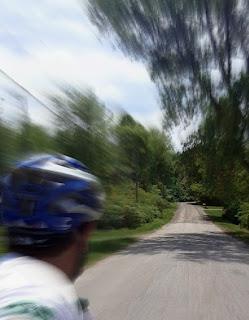 After riding up the edge of Prospect Mountain, which tops out at 1100 feet, I found my plans thwarted to ride around the reservoir by a big green gate and more No Trespassing signs.  I headed down Prospect Mountain Road which turns into gravel about a half mile from the intersection with Headquarters Road.  It's awesome. 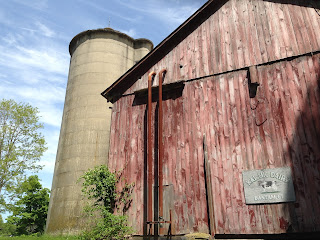 Where the dirt road ends, there is this cool dairy farm call the the Kar-Mic Dairy.  It's here where I learned not to store bananas in my handlebar pack with other loose items.  The banana had turned to mush from all the bouncing around and by the container of trail mix.  I was able to salvage some of it but I had to toss the rest and it was gross. 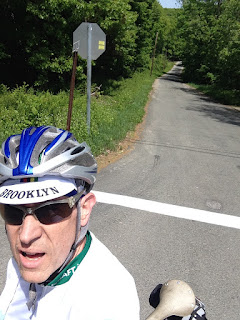 Heading west on Old Mount Tom Road you are immediately greeted with gravel and it descends into a little river valley and then starts a steady climb.  Eventually it turns to Pave and then the real fun begins.  The climbs starts out at 6% and then steadily increases until a whopping 14% for the last ten yards to the Stop Sign.  Reminded me of a mini Dibble Hill in Cornwall. 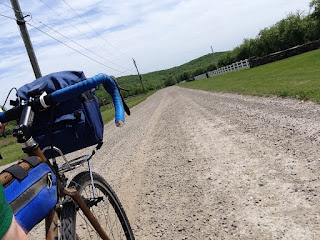 After the big climb, Old Mount Tom is paved until a big bend in the road and goes back to dirt.  This is a nice flat section for gravel road for almost a mile.  It climbs up a bit and then there is a quick descent down to Route 202.  From here, I rode down Rt 202 to Rumford Road, which is dirt and then climbed out of the Shepaug River Valley on Whittlesey Road.  From there I rode over to Church Hill and headed up to Walker Brook. 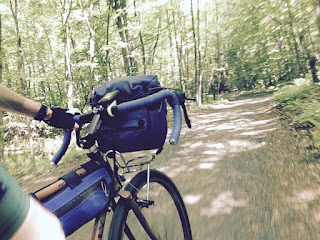 Before heading up the big hill on Judds Bridge I fueled up for the climb.  At the top, I was beat and bagged the last section of the Shepaug Railroad Bed and road down to Old Turnpike Road and took that back up to 2nd Ridge.  Boy what a climb that turned out to be! Road down 133 towards home and after the Bridge I started to cramp in my legs so I jumped off and tried to relax on the side of the road.  I ate my last piece of beef jerky and finished off the rest of my water.  A few minutes later I was able get back on the bike and ride home!
at 1:29 AM