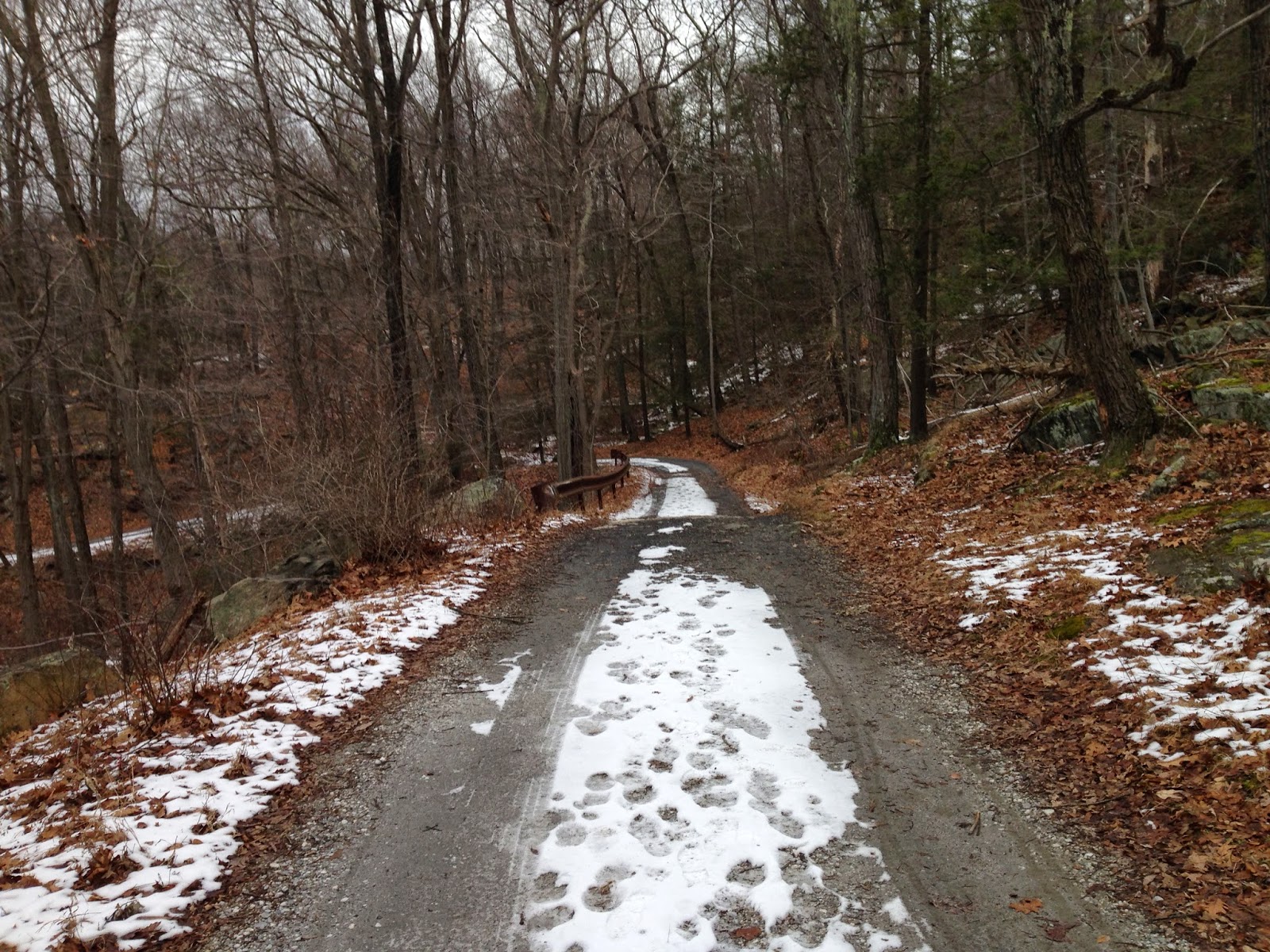 Despite my navigation issues, we headed west from Mahopac Falls Elementary School (pronounce like Mayo-pack) down a short connector to Route 6N called Potter Rd, which happened to be closed. It was still passable for bikes, though.  Our first taste of dirt, which on the map was called Clear Lake Rd, turns out to be more of a driveway/road into a Boy Scout Camp than an actual thoroughfare. As we were riding by different groups of Boy Scouts no one paid us any heed.  I asked one of the Scout Masters if it was a cold night and he said the cabins were nice and toasty with wood burning stoves. I thought back on my experiences in the Boy Scouts and we never had it this easy back in the day.  In order to earn your winter camping merit badge you had to sleep outside in a tent. That's the way we did it back in the '70s. 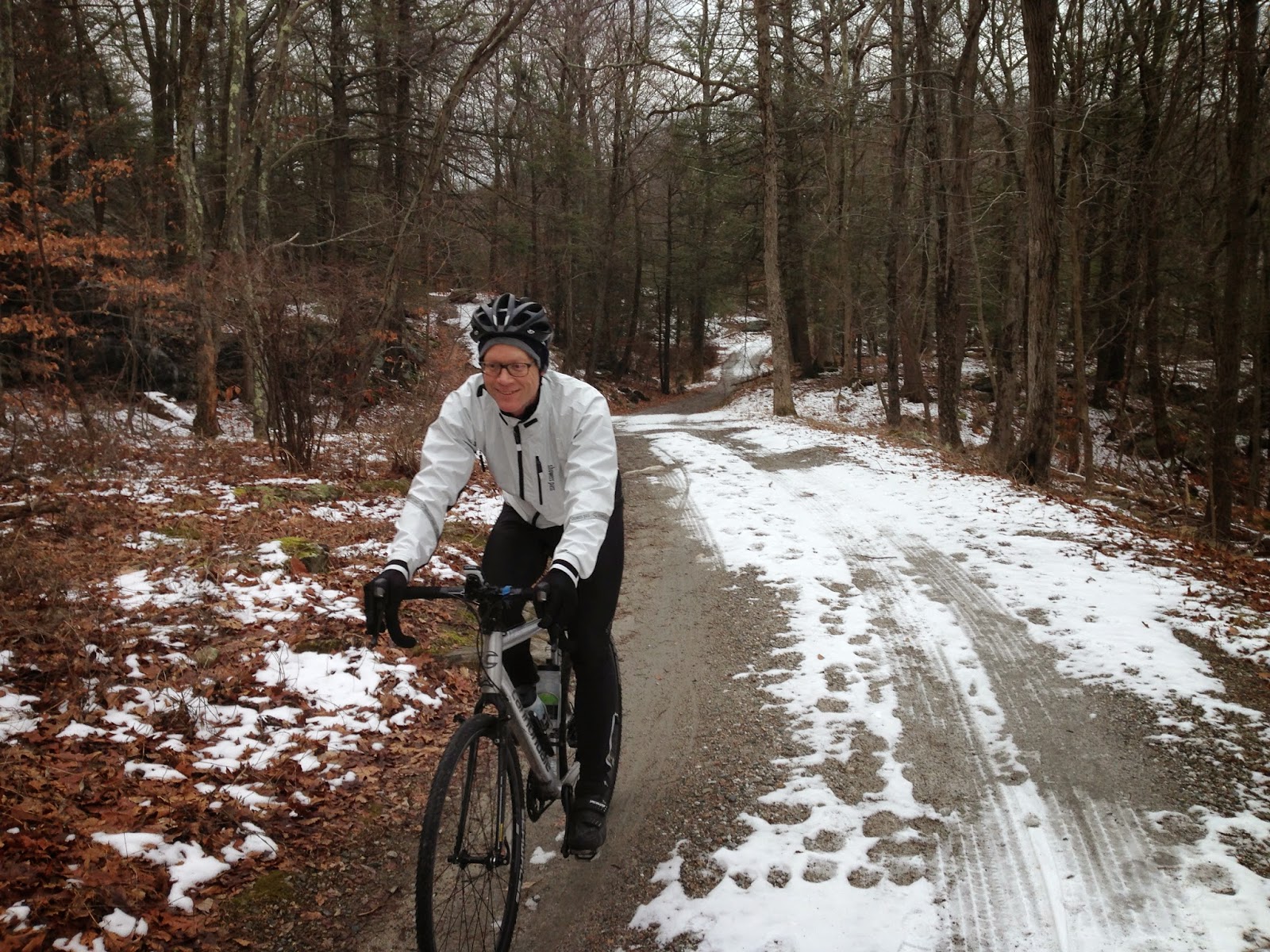 Clear Lake Road ends at a gate and hits a an old road that connects to Sunken Mine Road. This section was a lot rougher than some of the other unknown roads we have ridden this past year.  It was especially easy because we were riding down hill but it reminded me a lot of New Lenox Road in Becket, MA. 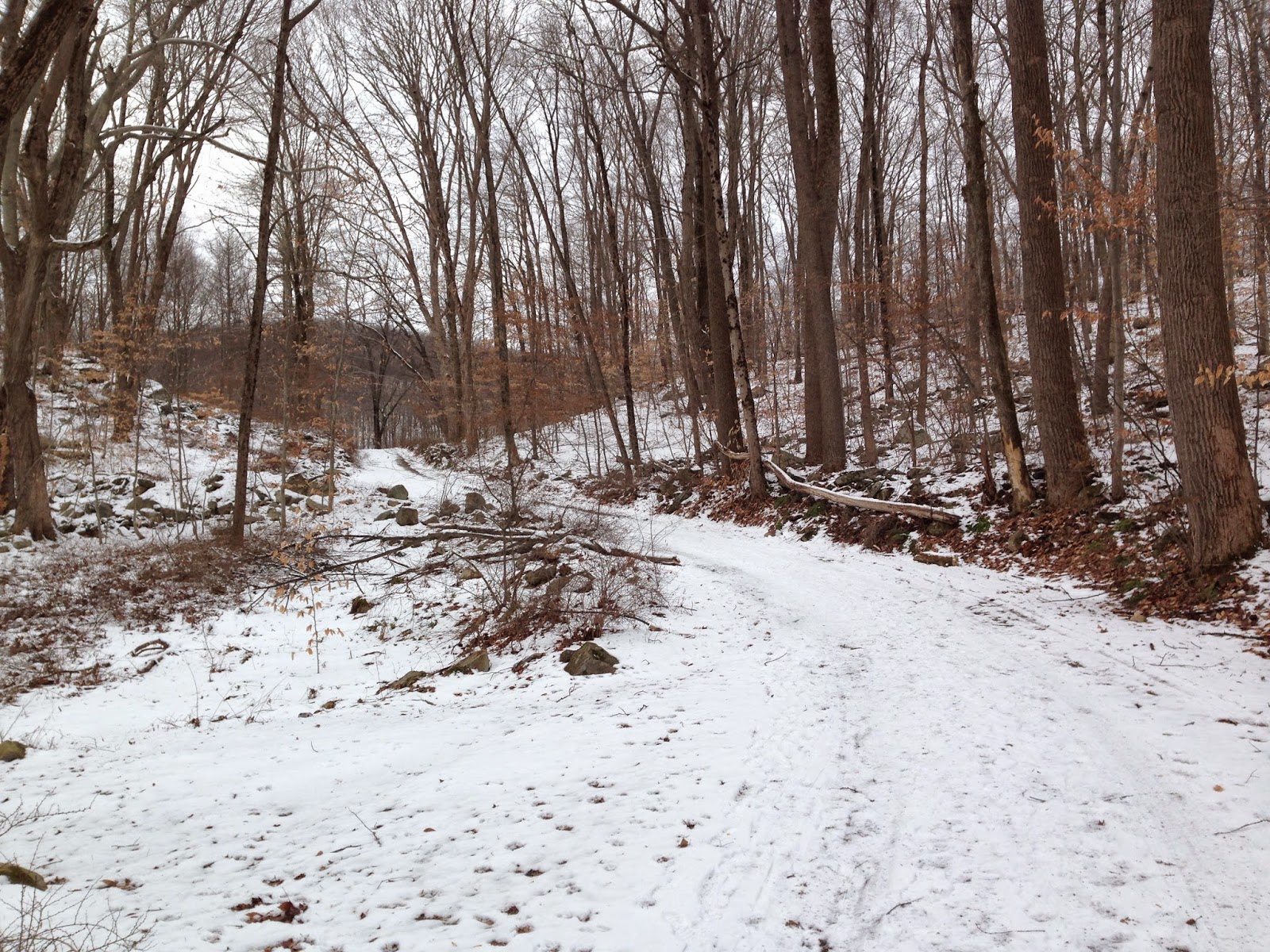 On Sunken Mine Road, we found snow and ice covering the road and so we took it easy which slowed us down quite considerably. Will and I had a few slips and spin outs on some of the icy sections but I was amazed to see that my tires were actually performing a lot better than I expected in these conditions. 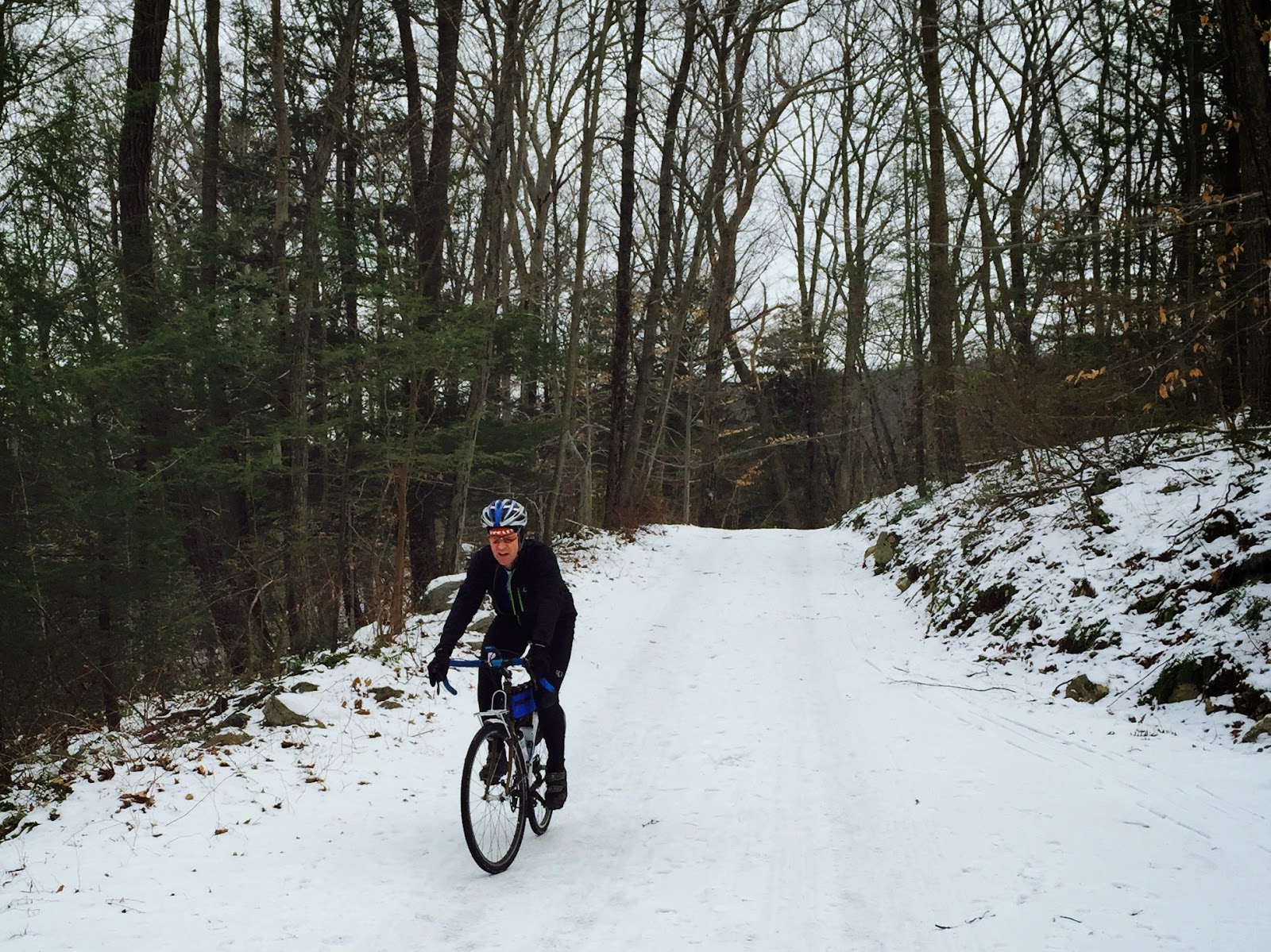 The altitude combined with the all the snow on the ground made riding through here a lot colder than I had prepared for and by the time we hit Dennytown Road I was really lamenting not wearing my Lake 303s, my toes were freezing! 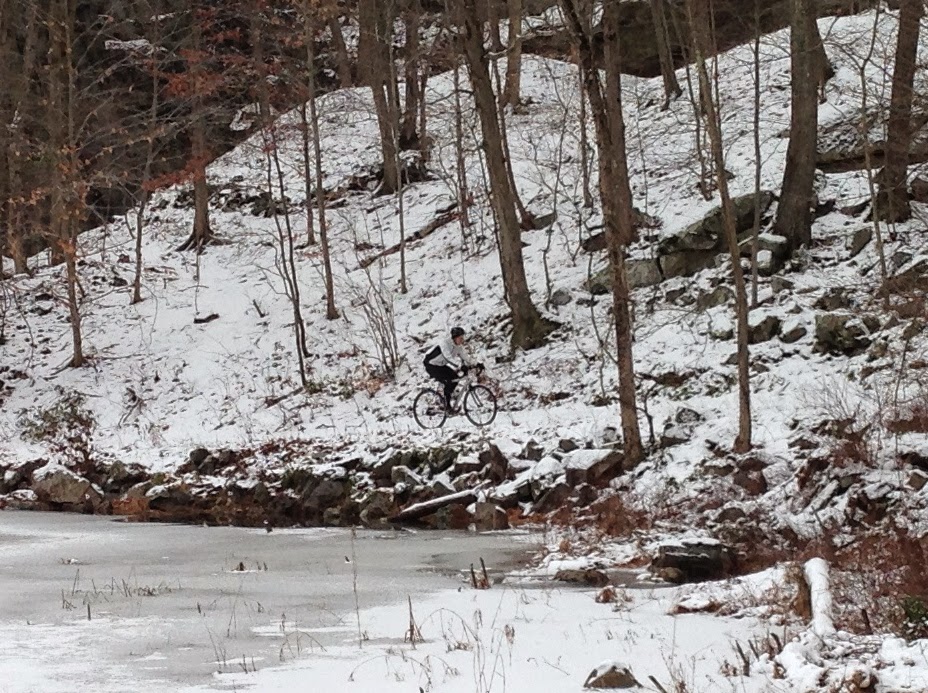 Despite being cold, the ride down Indian Brook Road was amazing and I was wishing I had my video camera with me.  At the intersection with Old Albany Post Road we stopped for a snack and so I could warm my toes up by walking around!  Our next stop was in Nelsonville, just east of Cold Spring.  We stopped at a deli for hot chocolate and talked to the locals for bit while we recharged (and my toes warmed up some more).  Once back on the bike, the first thing I noticed was that it was a lot warmer.  Finally, it was starting to feel like the weather that was predicted for today but, still, no sun. 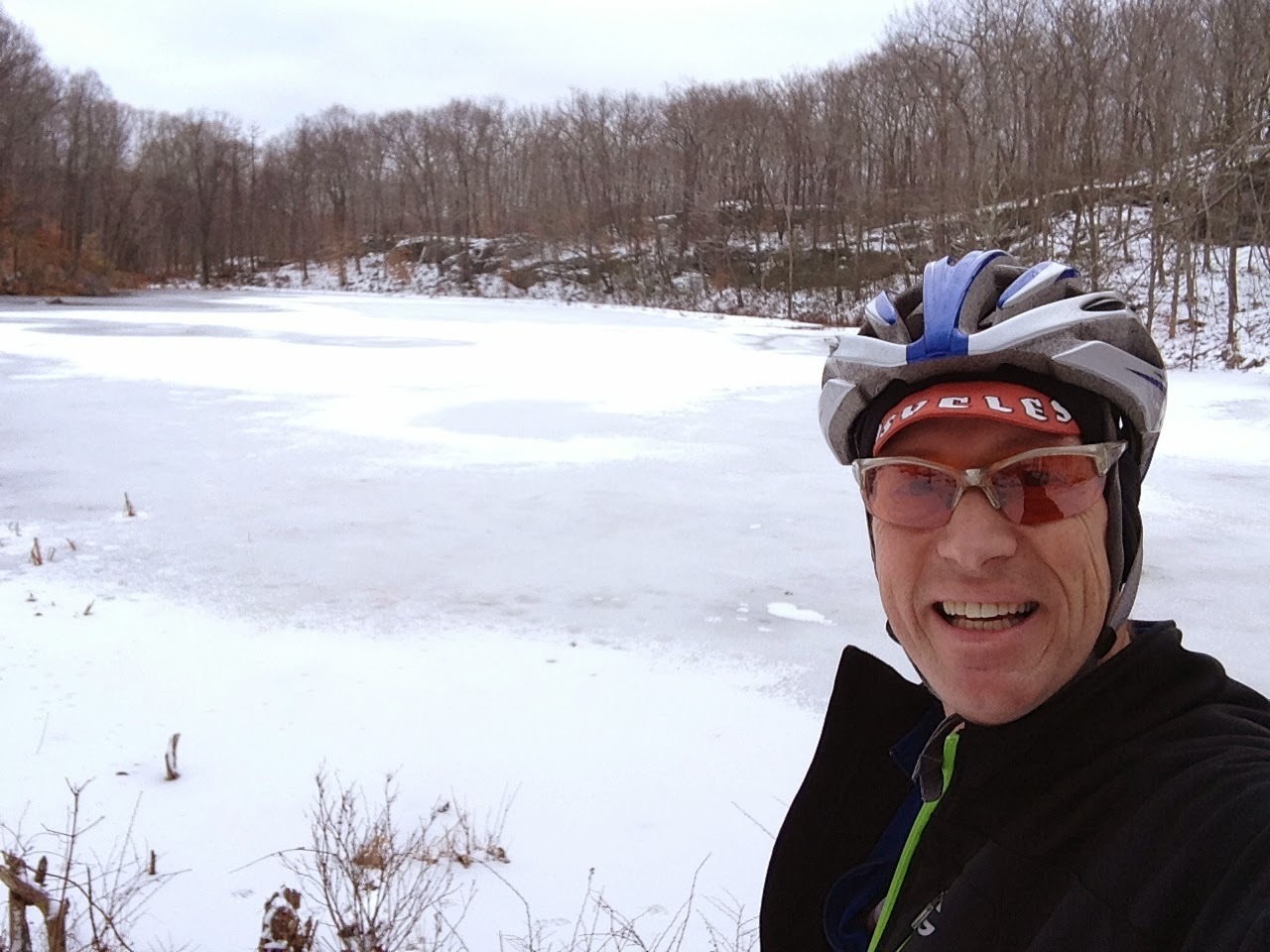 From Nelsonville, we rode south on one of the Route 9s and then we split off on Indian Brook Rd again! What is really cool about this section is that you can catch glimpses of West Point across the Hudson River.  Indian Brook Rd turns east and starts to climb, and climb some more with grades hitting 11%.  You pass over the Catskill Aqueduct that is framed by two pump houses and a bridge, containing the aqueduct crossing over a stream.  Crossing over yet another Route 9 we came to the lower intersection with Old Albany Post Road that we rode earlier this morning but then turned south on and began to climb. After the climb there is a nice descent and that's when I saw this crudely painted sign on the side of the road with a URL for www.oldalbanypostroad.info.

It seems that this area might be feeling the affects of gentrification and the newer inhabitants want their roads paved.  It would be a shame if that were to happen because it would really destroy the rural nature and mar the historical significance of the area. 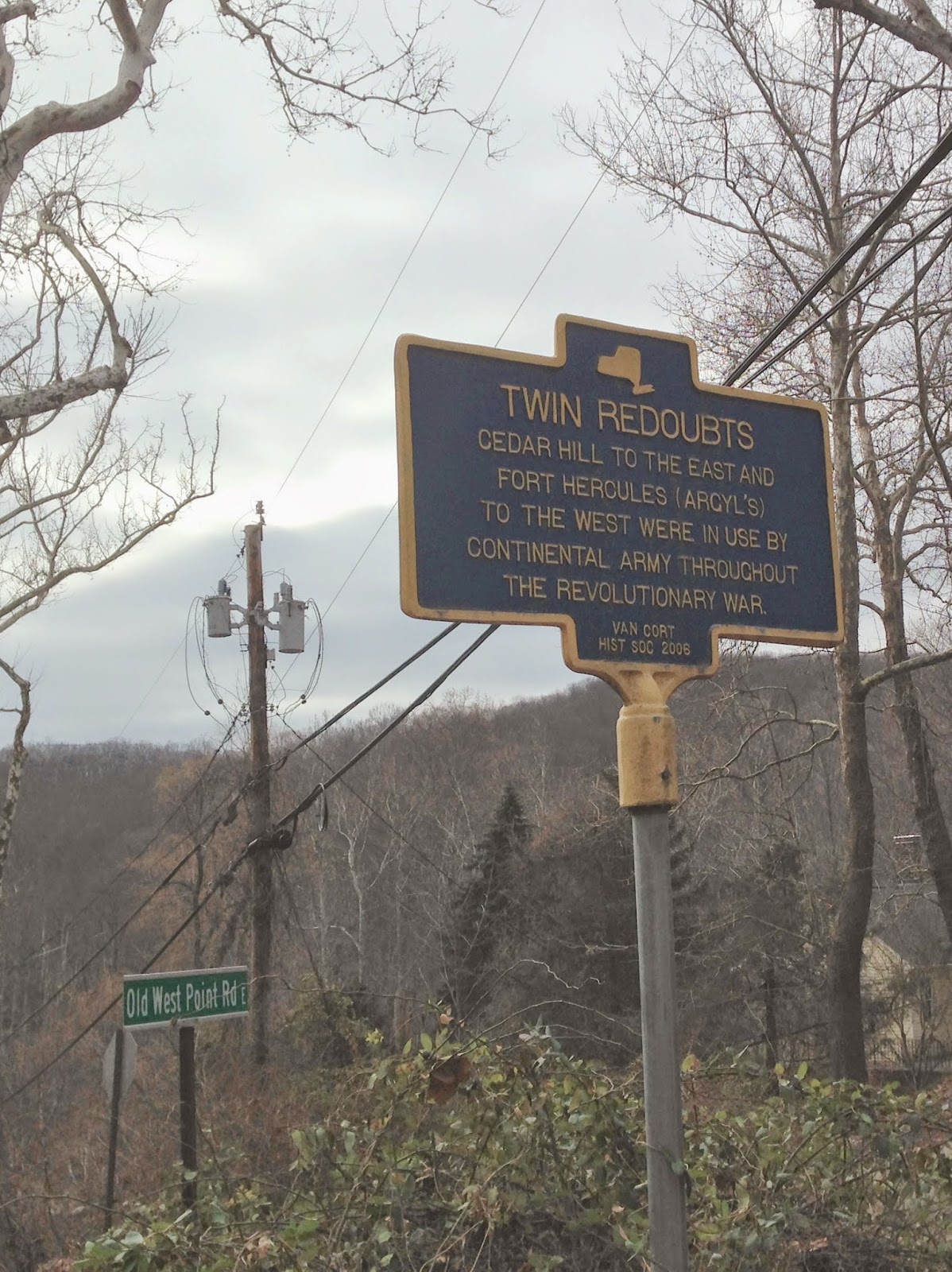 From Old Albany Post Road we headed down Old West Point Rd and between the old farmsteads and plaques everywhere denoting that this was a major stopping ground for General George Washington during the American Revolution, it was really interesting.  Old Albany Post Road continues south and where it turns back to pave you can continue on another dirt road that ends up a few miles from the Bear Mountain Bridge.  The only drawback is there is no dirt road back so we followed Old West Point to Route 9 and then picked up Old West Point Road West which starts out as a really big climb. At the top we stopped to recharge. 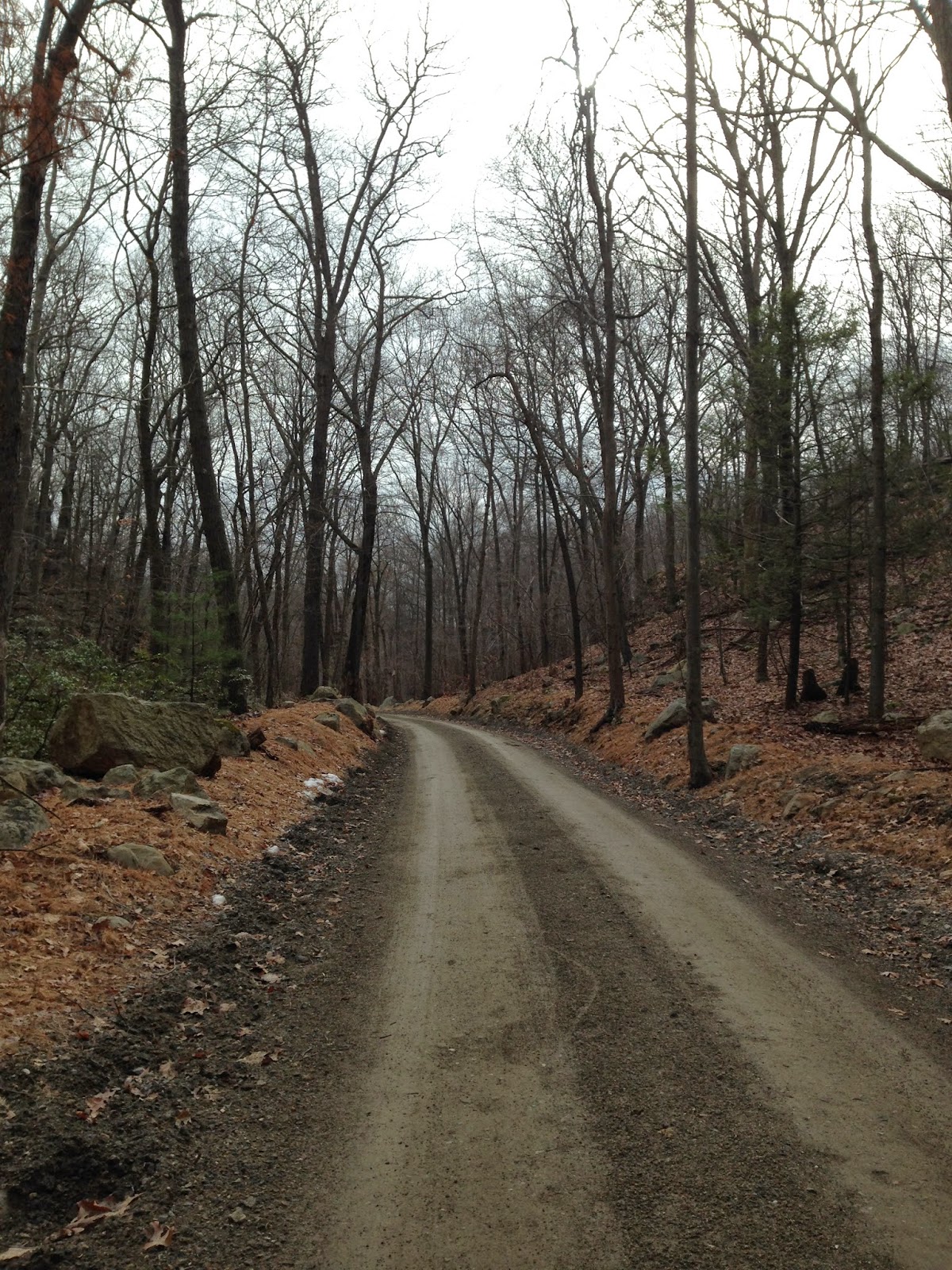 A few more climbs on both dirt and paved roads found us eventually back on Old Albany Post Road for a short overlap and then we rode east on South Highland Road back to Dennytown Road again where we found this barn with a few interesting signs on it.  Of course, I was immediately drawn to the Pabst Blue Ribbon sign.  Seeing this here was kind of disheartening because we still had about 13 miles till Blessed Relief would be upon us. 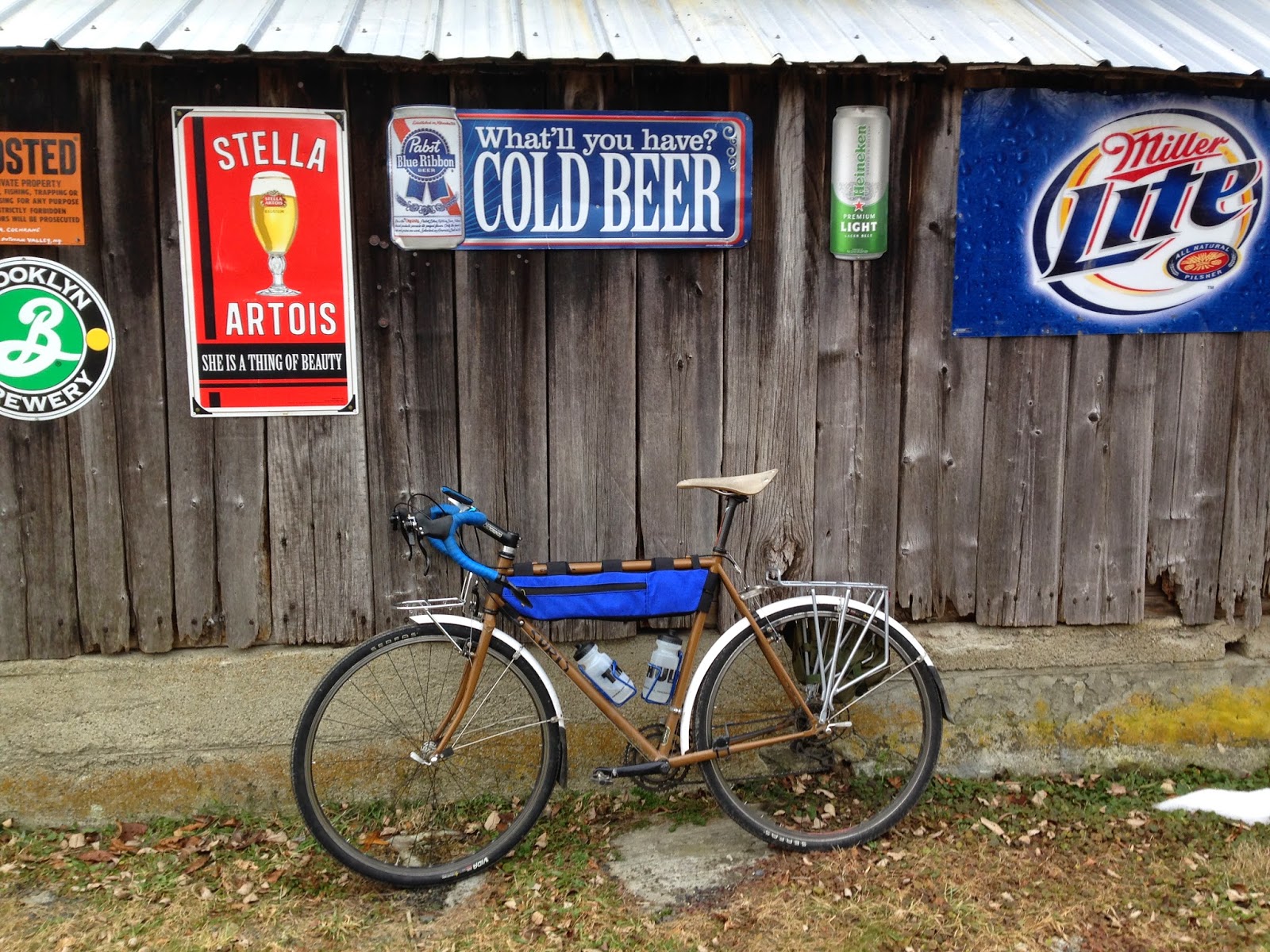 At this point we decided that we would bail on the remainder of the course due to time and just take the fastest route back to where we parked.  One last bit of dirt was bypassed and that was the route back up to Sunken Mine.  We figured that was going to add an another hour to the hour and a half that Google maps calculated for us to get back to the parking lot. 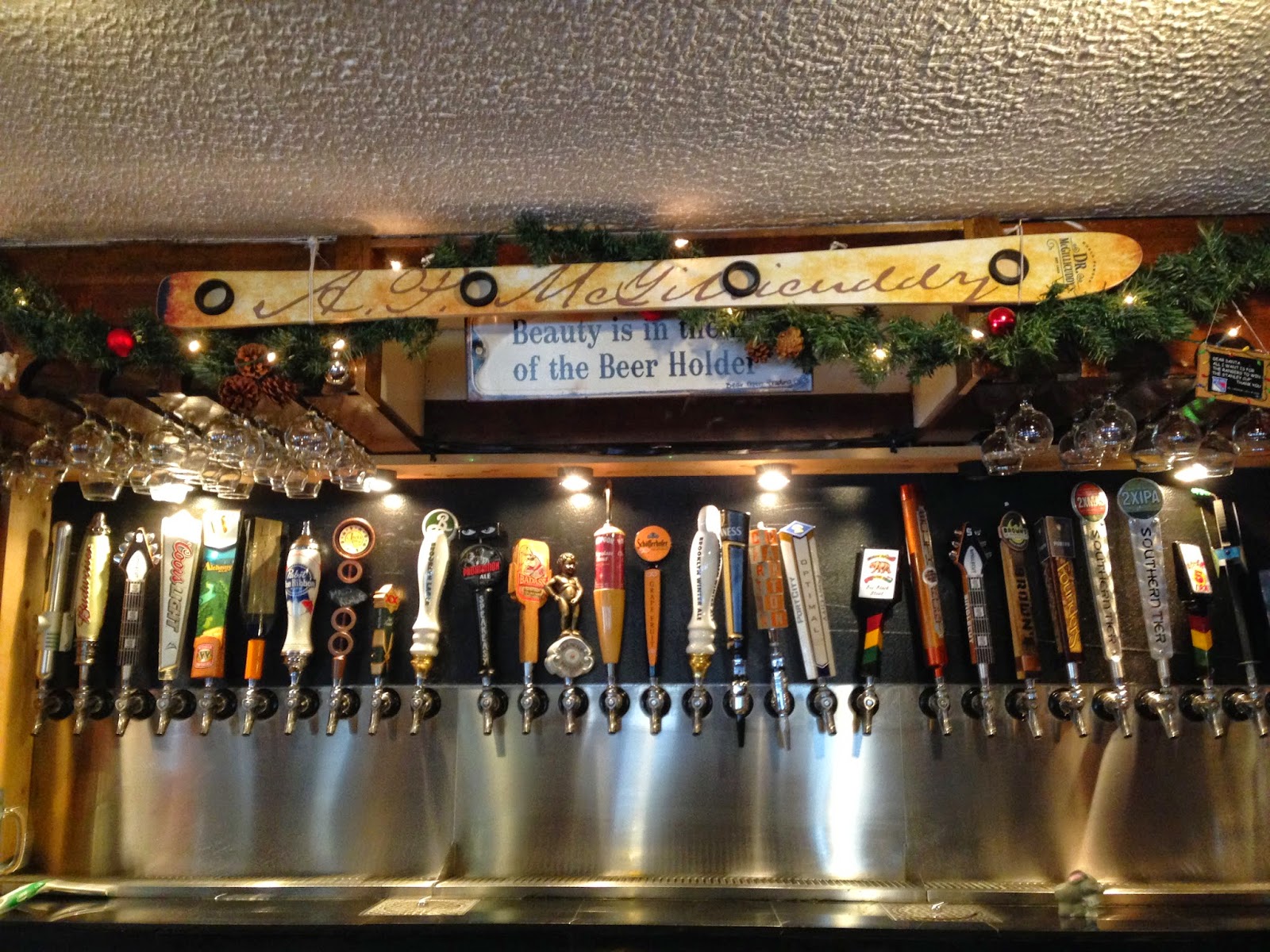 Blessed Relief was achieved at the Route 6 Tap House!  I had a very nice Porter and Will tried one of their IPAs.  Never had time to break out the PBJs during the ride so we ate them post ride in the parking lot before heading to Blessed Relief.