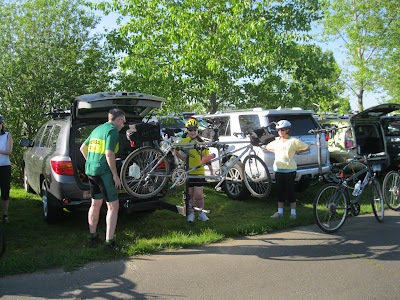 Today was our 3rd riding of the Bloomin' Metric on the Burley Rock'n'Roll Tandem and it was a blast.  This year Sound City Cyclists moved the venue to Sherwood Island which was much better if you ask me.  After spending the night at my Dad's house we figured it would be easy (and closer) to get to the starting point coming from New Canaan rather than Newtown and yet upon arriving at 8:00 AM the parking was already pretty crowded!


At registration we learned that Katie won a $200 gift certificate for Trifitness but come to find out is basically $200 off one of their Triathlon Training programs.  Rats!  Here I was thinking new pedals, a headset, some bar end shifters but turns out to be something useless.  Oh well.  This years' shirts are cool, basically riding shirts with a bunch of logos.  Better than the cotton shirts we got in the past. 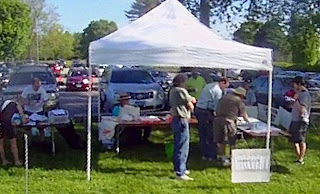 While driving into Sherwood Island we saw Katie's Grandfather who usually helps out with radio communications and the SAG wagons but by the time we got back to the communications tent he had already taken off.  So, the Commo guys let Katie talk to him over their portable shortwave radios. 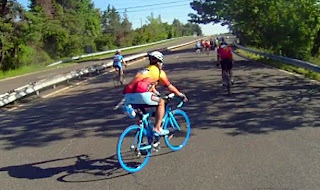 My father and his girlfriend had already taken off so Katie and I started riding by ourselves.  We nearly collided with this guy right out of the gate who decided to cut in front of us to check something on his bike.  Dang, that is one color coordinated bike! 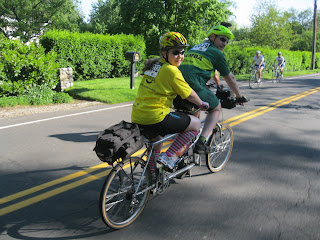 We caught up to my father around the three mile mark along the mansions of Southport.  We shot some videos of one another and took a few pictures.  Katie and I left them at the beach since we are a lot faster.


Since the new course had these loops in them I figured that we would probably take a second lap to let my father catch up but as we were coming to the end of the first loop my father and his girl friend crossed in front of us so ended up doing another go around on the first loop again so we could ride together a bit. 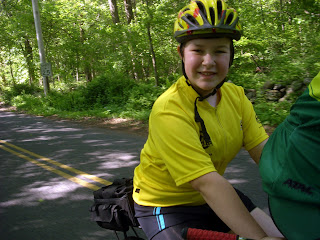 Katie and I rode to the top of Merwins Lane and took a break waiting for my father and his girl friend.  But they weren't deterred.  We realized that the new route was a lot more hilly and it was slowing them down quite a bit. 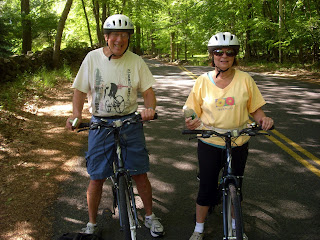 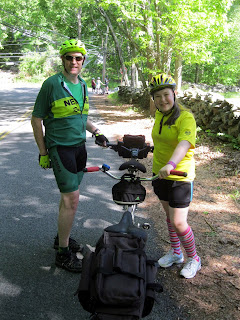 I let Katie try one of my Peanut Butter Guu shots, non caffeinated of course and I noticed that she had a lot more energy leading up to the Food Stop. 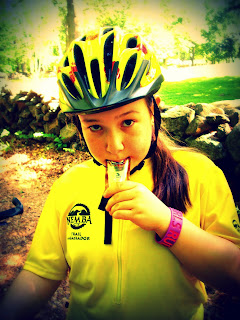 We got to the Food Stop about 10 minutes ahead of my father and proceeded to chow down on Bananas, orange slices, cookies, drinks, and trail mix!  It was a smorgasbord of energy foods. 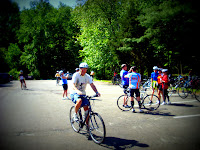 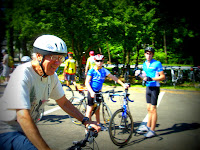 But he turned around and went back after Peggy.  She decided to wait at the turn off to the second loop thinking that the Food Stop was after it but it turned out that it was in the middle of the second loop.  So my father had to go back after her. 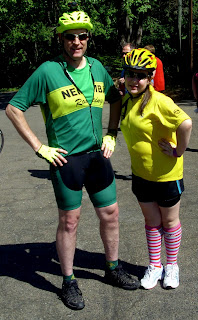 The Food Stop was at the old Westport Nike Base which I have always seen from the Merritt Parkway but never had the opportunity to stop in and check it out.  The missile silos are long filled and the buildings are used for an amateur astronomy group.  From there, it was 10 miles back to Sherwood Island. 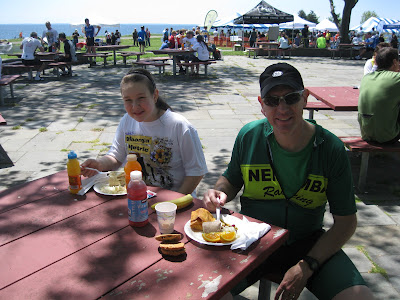 Katie and got back to Sherwood and were able to get the tandem on the car and get our lunch before my father showed up.  The weather was spectacular and it couldn't have been a nicer weekend to spend some real quality time with my daughter.