I am back on the Single Track!

Went mountain biking for the first time since Thanksgiving when I went down hard in the Upper Paugussett on the River Trail in wet conditions. Ended up with a bruised rib, I think. Took forever to heal. Anyway, I stayed off the bike and three quarters into the next month I developed a blood clot behind my knee. Talk about adding insult to injury! Felt like 1000 charlie horses going off in my calf. Tried everything to relieve the pain but nothing worked. Posted a question on Bikerag.com and someone answered that I probably have a clot.

Next day, went to the doctor, they had me get an ultra sound, the tech said, "Oh boy, there it is! You need to get to the ER immediately!" Went over to the ER, got admitted in 45 minutes but good thing I brought a book because I think I sat there for over an hour before a doctor finally saw me. I guess if the clot is above the knee its an automatic 4 day hospital stay while you get an intravenous drip to break up the clot. If its below the knee, they don't do much for you except put you on Blood Thinner/Anti clotting meds. Since mine was behind the knee, I had the pleasure of receiving a daily shot in the gut, to be self administered. I thought about it but chickened out and had my wife do it for me. Still, that was fun.

Anyway, back to today's ride. After a few false starts I finally got the Fixation 69er completed and rode her today. Nice! What was holding me back was the rear wheel, needed a smaller tube for the tire and the headset. My first attempt at mounting the Crown Race on the Surley Instigator Fork didn't work. So I installed it with it but someone said you got to have the crown race. So, this time I filed it down and used my Crown Race installer (piece of pipe) and this time it went right on! 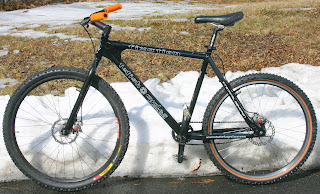 So, I started my ride today and of course as with every new bike, riding it for the first time there were adjustments needed along the way. Only had one time where the rear axel popped out of alignment. Got it back on tighter but I am still going to get a good pair chain tugs. The SAAGO stem slipped on me, too, so at the trail head, I tighted that down as well, but I found it to be more comfortable higher rather than lower as some buddies recommended.

The Poly Brody had quite a bit of snow and ice on it and I actually couldn't get up the road in the two spots - had to walk. It's so demeaning! Still, I was able to pedal the steepest section, on my 18t cog, too! Last time I rode this section was on the Qball using a 20t and that was a huff and puff!

On the way down, I stayed off the Mulikin Trail because I figured that it was going to be pretty sloppy. On the way down I noticed that someone made a vain attempt at blocking the proposed alternative section of trail coming off the Polly Brody that would basically get you to where the forest road makes a 90 degree turn west without having to climb the big hill - it was to be the Reverse Mulikin. I think in my last post of last year I talked about the trail walk I did with my daughter, father-in-law, Tom from NBLA.

Once I got back onto Hanover, I decide to check out that little MX track at the corner of Pond Brook and Hanover. It had some nice up and overs that the big wheel upfront ate up nicely! The 69er concept is awesome! Then I followed the old Shepaug RR Bed, past the boat ramp to see what Frank was riding and low and behold I think I found what is probably the former section of Hanover road. Couldn't ride a section of it due to the snow but it was a cool find.

One think I didn't mention earlier, is that I am riding with a new GPS, in fact, two new ones. Santa was kind to me and gave me a Garmin Edge 305. It sits nicely on the stem of both bikes. A couple of weeks ago I got a Magellan Explorist 400 and also got a 2 gig sd card for it. The eXplorist was on clearance at the Danbury Sears for $80! I got it because the Mapsend software is much supperior in my opinion to the Garmin Mapsource Topo. What I wanted to show below is the difference between the Edge and eXplorist. Of course, I think the Edge had an unfair advantage sitting on my stem vs the eXplorist in a cell phone pouch on my shoulder and not even ontop of my shoulder. I think I might have to rethink that one again. Maybe put in my camel to ensure it gets a constant signal. 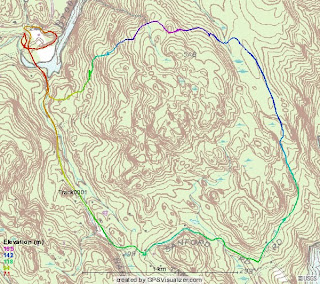 The first image is the Edge and the second is the Edge and eXplorist combined. Probably not doing it justice in this example and as I said, I will have to do it again. However, the difference in points is amazing! The Edge had recorded something like 3K and the eXplorist only 95.

Getting to this point was extremely painful, however. I haven't found a decent track editor and even through I don't like the Mapsource Topo scale for maps, as an editor its pretty robust. So, in order to get the pretty little map you see below you, this is what I had to do to get the Garmin Edge data. Upload to Sportracks and then export to a GPX file. I am using the Garmin Training Center but the developers that did this program were basically trying to create a watered down version of the Motionbased site, which has a free component but to really have fun, you have to pay to play. No thanks. 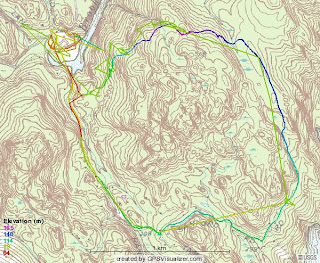 So, the GPX format from Sportracks was unreadable by Mapsource, so I had to download GPS Babel, the GUI version is great, and convert to the mapsource format. Edit with mapsource and then save back to a GPX and then use GPS Visualizer to make the pretty map that see here. Below it is the same thing I did for the eXplorist. Magellan is even worse than Garmin. They don't even give you any software with the unit, so you have to buy their Mapsend. Fortunately, EasyGPX, freeware, just had a refresh and works great. Had to do the same using GPS Babel to edit the eXplorist track.

What does this mean to the couple of people that read this blog? Probably going to see less maps from every boring ride I do in the Upper Paugussett, at least until I get the new trail started. I will still try to keep this interesting.