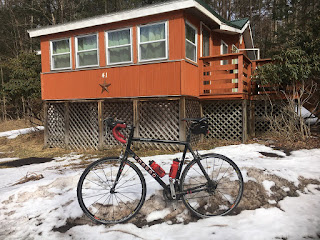 Gavin and I drove to The Great Pumpkin Cabin in Smallwood, NY early Sunday morning for 60+ mile ride in the Catskills.  We got off to a delayed start due to Gavin getting snow stuck in his cleats and he couldn't get clipped in. By the time we started rolling my fingers were freezing and I was trying to warm them up as were riding.


The night before I finally replaced my Continental Grand Prix 4000sII tires with new ones. While we rode out from Gavin's cabin I noticed a hop in the front wheel.  I stopped to check it out and found that the bead had come unseated. I had to use a CO2 cartridge to re-inflate the tube and this time it held. 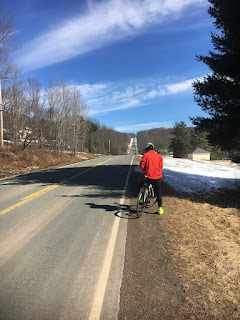 When we got to While Sulphur Springs we turned onto Dahlia road and started climbing but at 15 miles in we came to a hill that we weren't expecting and stopped for a snack . It's a Class 3 hill with a max grade of 12%. Gavin led the way up most of the hill but had to stop 3/4s of the way up so I went up ahead of him. 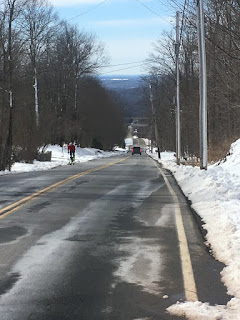 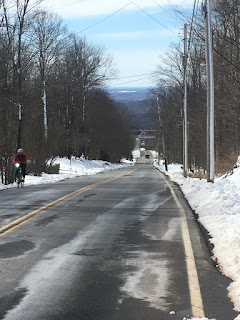 Then we had a really nice downhill descent along the Little Beaver Kill. We came out onto Old Route 17 and our route took us to Livingston Manor where we stopped for hot chocolate a the Brandenburg Bakery. 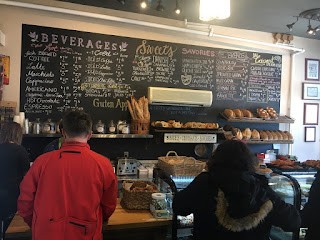 From there we rode parallel to Highway 17 and then came back to Old Route 17.  We stayed on this until we got to Roscoe and then eventually stopped at the Roscoe Brewing Company for lunch. 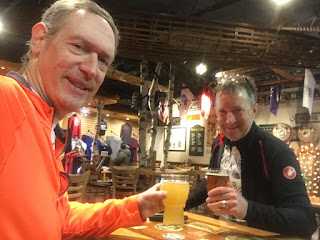 Gavin went for the Brown Ale while I went for the lowest alcohol beer, the Wheat Beer. It didn't have that German style wheat flavor, rather more of an American style flavor - it sucked. 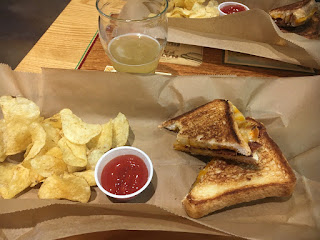 Lunch, however, was awesome. We both had the 3 Chili Cheese and Bacon Grilled Cheese sandwich. 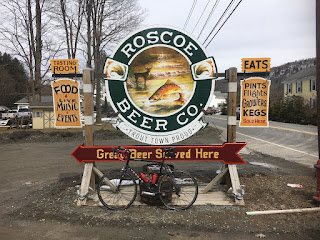 Back on the bikes we decided to call an audible and take the fastest way back to the cabin which turned out to be almost the same distance if we had stayed on the original course. The big difference was missing the big climbs, going from the Beaver Kill river valley to the Willowemoc river valley and then climb out from there and eventually make our way to Liberty. From there we followed Rt 55 back to Smallwood. 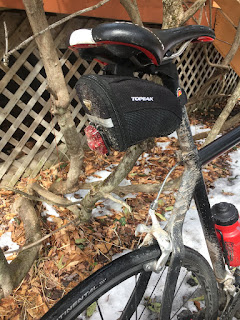 I am glad I didn't wash my bike after last weekend's ride because today the bike just got dirtier.