Leaving Will's place near Chatham, Saturday morning it was raining. It rained the whole time we drove to Becket and it was raining when we mounted our bikes and started climbing Fred Snow Road.  Will and I left about 45 minutes before the official start and it was raining. We were joined buy a guy from New Haven by the name of Dwight. What I noticed about Dwight's bike was that he was carrying 4 water bottles! Apparently, he was training for the Dirty Kanza and he planned to drink all of those bottles during this ride. 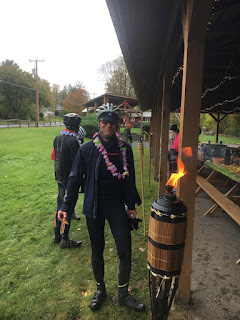 In this kind of weather, the biggest enemy is having wet clothes which could lead to cold hypothermia. I experienced this a few years ago at the Foolish Classic in which 50 miles into the ride my hands and feet were numb and I was shivering uncontrollably. I DNF'd. I thought I was pretty prepared this time around. I started out wearing my neoprene gloves, Lake 303 boots, and my commuting jacket. I probably rode 20 miles with the gloves before I had to change them. The problem with the Neoprene gloves is that they don't breath and my fingers were wet and with the cold, they got cold. My feet were fine but I should have worn Smart Wool socks, and while my jacket is water resistant it wasn't made for a full on rainy day ride. The only saving grace was the mesh liner because it kept the wet jacket away from my jersey and I stayed warm. 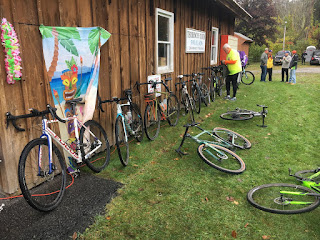 This year's route was very similar to the 2016 route.  If you want to see all the routes, check out the following Map:  Fall Foliage Gravel Grinder (F2G2) Routes.  The big difference between 2018 and 2017 is that last year's course followed a lot of the 2015 course but bypassed Viets Road, which was a Napoleon's Death March style hike-a-bike. After the first rest stop we headed down into New Marlboro and passed by a place that I call the Sound of Music view because it looks down the valley towards southern section of the Taconic Range and Mt Everett sticks out as the highest point. On today's ride, however, visibility was limited to a mile at best and there was no view. 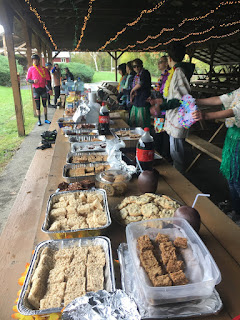 We turned onto Old North Road and I was amazed to see that it had been completely redone.  When we got to Hammond Road Dwight stopped to change gloves and told us to go on ahead but that was the last we saw of Dwight till after the ride. Apparently, he flatted but didn't have any CO2s on him and couldn't re-inflate his tire because it was tubeless.  He had to wait till some other riders were able to help him out.  We met up with him after the ride. He got back before us because he blew off the main rest stop. Dwight didn't get lei'd like we did.

The ride up until this point was comprised of short, punchy climbs. The cold and rainy conditions, combined with the grit coming up from the roads did a real number on my brake pads. With 650 miles on my new gravel bike I was really concerned for my ability to stop.  When we got to Brace Road, the 4x4 track that leads out of Beartown State Forest towards Tyringham. 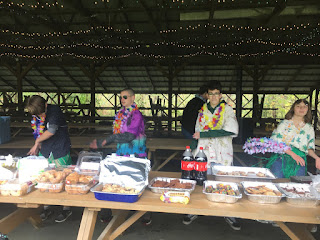 I don't think I have ever seen Brace Road dry.  There were some really big puddles that we had to walk around. There was no way I was going to try and ride through any of them after Ashford.  On the descent on Brace Road, I had to drag my foot on the ground to slow down on some of the hills because my brakes weren't slowing me down enough. Once we came out of the woods we stopped so I could adjust my brakes, and by adjust I mean tighten them as much as possible.  I was able to get them to work a little better.

After the Luau rest stop, the real fun began. F2G2 has two signature climbs, the first is George Cannon Road with a 20% pitch and then Schermerhorn Hill that equally steep if not steeper pitch and also longer. Will took off as usual with a group of other cyclists while I just ground my way up the hill in the lowest gear possible.  The same went for Schermerhorn Hill.  On Shermerhorn, Paul Zackin, a rider local to my area passed me on the hill.  On both hills, I never stopped and I didn't walk.

"Summiting" Schmerhorn is huge relief since the rest of the route is essentially down hill from here. 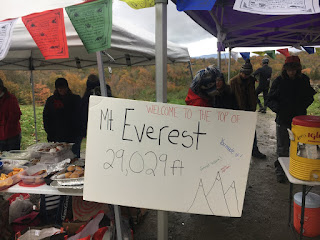 The Pittsfield High School XC Country team definitely got the symbolism right for this rest stop. 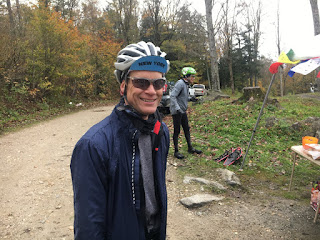 We ate quickly and got a maple syrup shot before getting on the bikes and heading out again before we got too cold and it was cold. 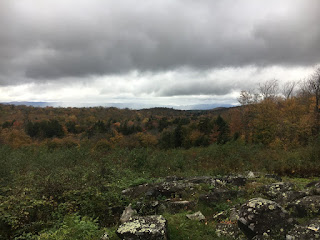 In fact, it seemed to have gotten colder and along the way it started raining again. 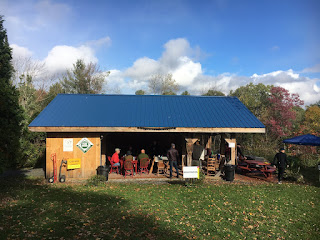 On the ride there were a few peaks of sun but it wasn't until afterwards that the sun finally came out and warmed things a bit. Great beer from the Wandering Star Brewery and awesome food prepared by Cantebury Farm. This ride is by far the best gravel grinder in the Berkshires.

Nice ride recap. Thanks. A beautifully epic effort, this one is. Sorry I missed it this year (gosh darn work!)