Northwest Connecticut's first official Gravel Grinder, The Autumn Roubaix Cyclefest, was a huge success. After two months of pitching this ride on the interwebs, putting cards on people's windshields, riding the routes and creating cue sheets it was finally happening. 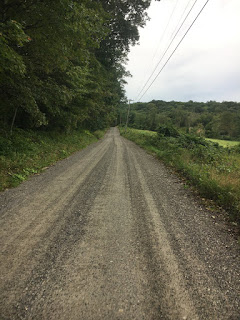 As with any first time event there are always glitches.  Fast Track Timing lost my registration so I had to settle for the first available number when I was the first one to sign up! There were some hiccups with the cue sheets which sent people in the wrong direction and the water/food stop on Barker Road closed up shop early or maybe I was too slow. 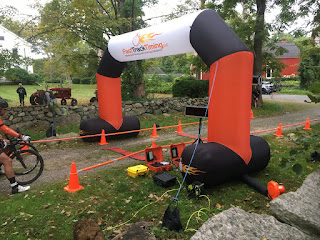 The turn out was huge, more than we expected.  By Friday night, there were 88 riders registered for the 3 rides and after it was all said and done, 133 people showed up! I convinced a few people that were on the fence, and on Saturday, as I was putting up some directional signs when I mentioned it to woman by the name of Rose who was riding by and she showed up! 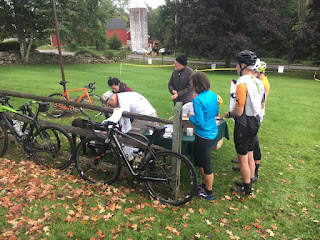 Right before the starting pistol Rich asked me if I could set this guy's phone to follow the route. His name was Pierre and he was trying to get the route on Ride With GPS.  I tried to do it for him but couldn't find the route. I offered to be his guide. He had is significant other with him but when the timer started everyone tore off including my two charges, and just about everybody missed the first turn, onto Sand Pit Road - 50 yards in from the start to First Dirt! 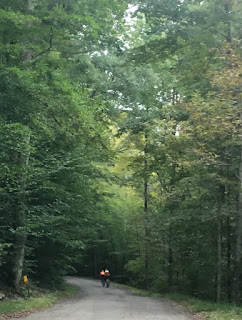 On the climb up Church Hill I met up with Christian Bratina, the guy who emails out a local listing of rides in this area but they pulled ahead of me when I met up with Pierre again.  His girl friend was still coming on so I slowed down. After crossing Rt 109, Pierre must have stopped and waited for his girlfriend because he was no longer behind me. 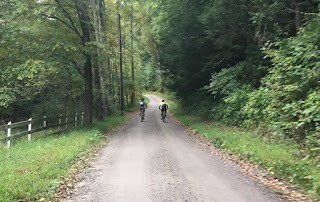 Right before Hartwell I caught up to a couple of mountain bikers that were riding the course but when I got to Judd's Bridge and doubled back to Hartwell to see if Pierre was coming.  I didn't see anyone coming down Walker Brook so I turned around and climbed up the Hill. 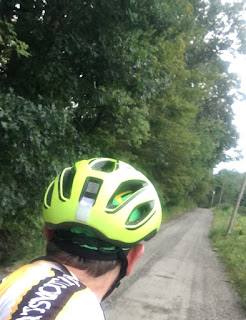 After I got to the top, I heard someone huffing and puffing up Judd's Bridge and when he got to my position we introduced ourselves. His name was Dean Perry. He said the cue sheet said to turn right onto Mine Hill, which was not what I wrote down on the cue sheet but he showed it to me and it said that indeed. Right about that time John Winchester showed up.  John wanted to follow me and Dean went his way (he rides these roads all the time so I wasn't worried about him getting lost). 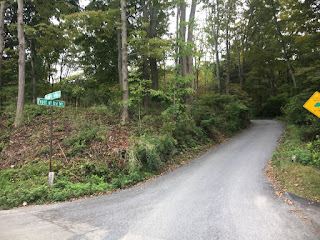 John and I almost caught up to Dean but then he turned onto River Road and we decided to ride through Sega Meadows (more dirt). The ride along River Road was really nice and then he headed into the second course deviation of the ride, Front of the Mountain!  This is a killer climb but worth doing.  I think the steepest section on this climb is 15% which is the same pitch as the paved section of Calhoun Hill over in Washington. 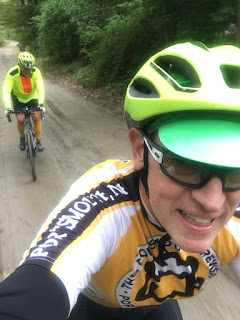 The one thing I noticed while climbing Front of the Mountain was that there was only a single tire track.  That single tire track belonged to Dean! John and I caught up to him Mud Pond Road and we stuck together for the rest of the ride. 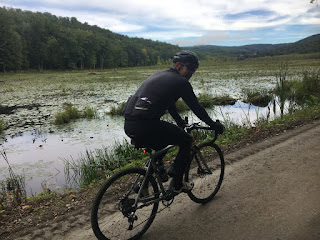 At the end of the Mud Pond was the first rest stop. We fueled up on fig and granola bars, had some oranges and topped off the water bottles. The weather on Sunday was confusing. Everyone was saying that it was going to be really nice but the sun never came out and I never even took off my arm warmers. In fact, I should have worn my wind vest but I ditched it at the last second thinking that it was going to warm up. It finally did warm up but not till the ride was almost over. 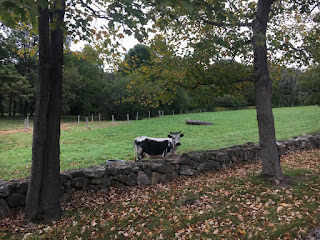 After the rest stop we climbed up Peet Hill and then after a quick little down hill we started climbing Iron Ore Hill.  The cows were grazing nearing the side of the road while we ground our way up. 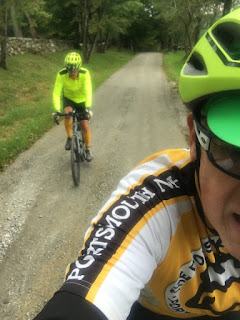 The Iron Ore climb is righteous with a max grade of 12.5%.  Eventually, we got to Rt 341 and began the long descent down to Kent. Hooking through Kent and onto River Road we decided unanimously to go for Kent Road North and why not? Would you rather climb Skiff Mountain on a paved road or tackle what I think is the toughest dirt road climbs in the State? Dean was all for it and John wanted the full experience so we headed down River Road.  I was surprised to see the gate open. 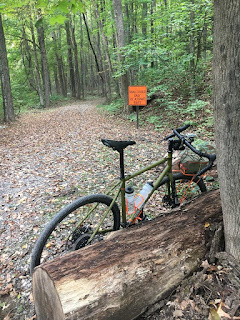 At the start of Kent Road North took a few minutes to dehydrate while Dean went along ahead. I started first and once I got off the good portion (re-graveled) and onto the crappy, washed out section the first thing I noticed was that the road was in pretty good condition. While John cleaned the climbed, I stopped twice. Once because I stalled out on a rock and the other to pick up Dean's cell phone that he didn't know he dropped until I asked. Good thing I picked it up because a 100 yards upward there was a van driving down the road?  I guess this was one of the times when the road wasn't closed although the sign did say daily. 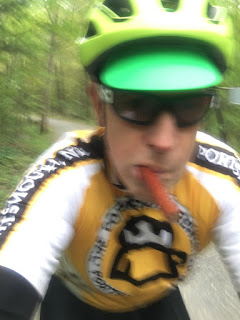 I felt pretty good after that climb so it was time to celebrate with a meat stick! After the ride I would find out there is a private segment and I KOM'd it! For 3 years I have been trying to ride this road and today I was finally successful! 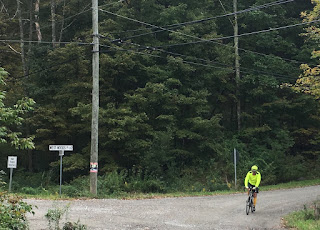 The portion along West Woods #2 was pleasant but the descent to Skiff Mountain Road was still pretty sketchy. 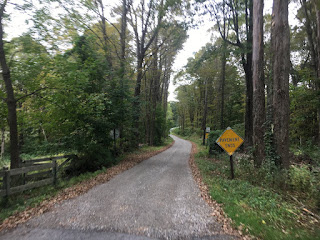 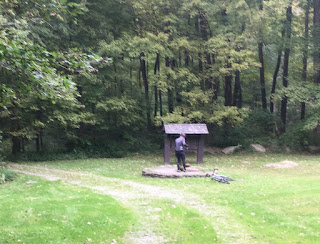 We stopped for water at the hand pump.  I should have filled my bottle because little did we know that the rest stop on Camps Flat Rd would be gone by the time we got there. 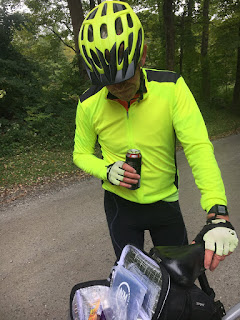 Dean had a small cooler on the back of his bike with extra drinks.  I did finally eat this protein bar that I got as a sampler from a local distributor that was out of this world. 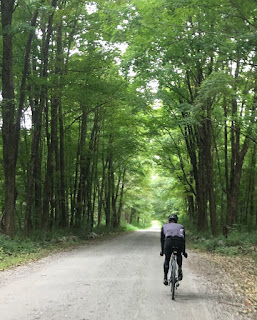 The descent through the State Park was awesome but also very chilly and it wasn't until we got on Schaghticoke Road did I finally warm up. 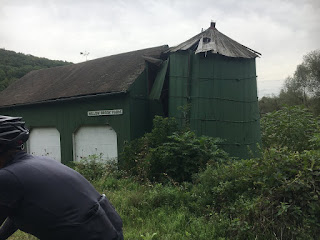 When got back to Willow Brook Farm the rest stop was gone. I guess we were moving too slow but it didn't matter because we were having a blast. Everybody had at least a water bottle left and at this point we were only 10 miles from the end of the ride, a lot more if you were staying on the main course. 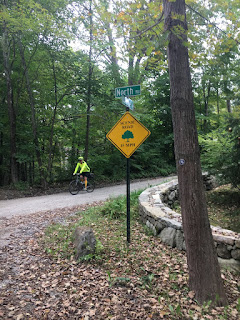 The little dirt excerpt down Mine Road was fast but like the last time still sketchy. 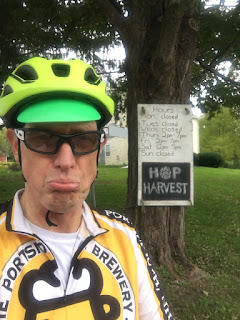 Too bad Kent Falls Brewery is closed on Sundays, otherwise I might not have made it back. 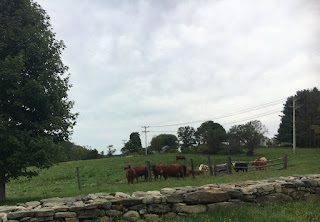 The last deviation to the course was the climb up Gunn Hill.  From the intersection with Ash Swamp you hit a 7% grade climbing turn and towards the middle of the hill it gets to be over a 15% grade. I chugged up it while John flew up it. Dean made it halfway before walking the rest.  For a 68 year man I was dually impressed. 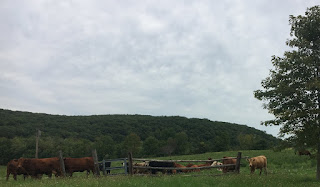 The cows at the top of Gunn Hill always look at you funny. 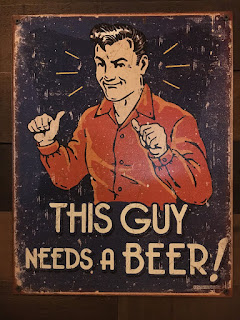 When we got back to Hunt Hill Farm, everything was broken down and just about everybody had left. Still we were able to get a hot dog, some salad, cokes, and desert. I don't care that we came in last because it was a great day to be on the bike. After eating I met Dean and some other riders from Brooklyn, NY that did the 60K course and we socialized and drank a few beers.