Prelude to D2R2: Camping in the rain

If you want to have the full D2R2 experience, you need to camp out before the ride. It's also nice to camp out after the ride so you don't have to cut your celebration short. This is my second year camping out and it's a blast. Especially since, I have fallen in with this great group of guys, and a lady, whom I met through one of my riding buddies, Mike. 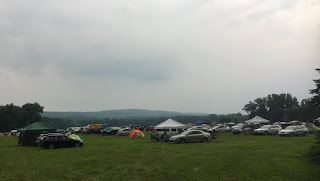 The weather forecasting boffins called for afternoon thundershowers and then all hell breaking loose around 9 PM.  While driving up to Deerfield, it rained a bit on the highway but when I got off I-91 in South Deerfield, the heavens just opened up.  By the time I got to the registration tent, however, the storm had passed. 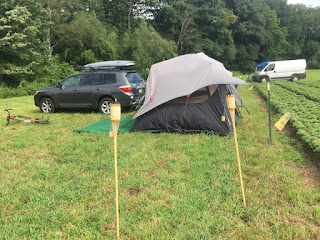 I brought the cabin tent this time and it was up in a minute. It took more time to stake it down and set up the fly, which was the fly from an old tent. While it helped shed the rain that came later that night I couldn't really open any of the windows because I was getting some splash and my guess was that the fly wasn't all that good to begin with. Next time, when the weather might an issue I am bringing the better tent. 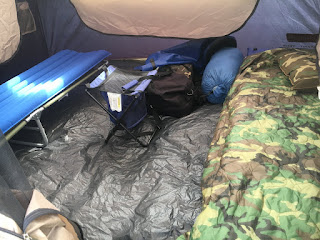 I decided this year I was tired of sleeping on the ground and went out and got some cots. They were really comfortable and made getting up so much easier. 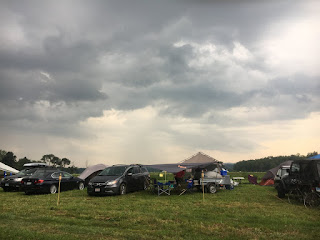 Everyone one from last year's D2R2 crew, Scott, Todd, Jasmine, Mike, Paul and Will, were here again along with some newcomers, Rob, Jason and Tim. Jason and Tim were both from CT and Rob from MA. Rob brought a camp trailer with electricity and portable stoves. It even had a shower but wasn't working at the moment. Rob also turns out to be a really good cook and we had steak tips, shrimp and paster for dinner, along with plenty of beer. 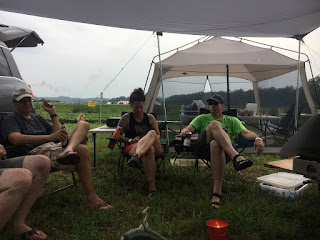 Rob also had really big canopy that he set up between his car and the trailer. We hung out under it while the bugs weren't too annoying and because it was a lot cooler.  The humidity Friday evening was brutal so any airflow was welcomed. 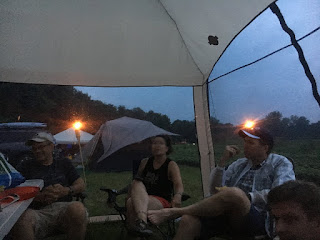 However, when it got dark, the bugs came and we headed into screened tent where we listened to music, ate, socialized, and drank a cornucopia of beverages. Scott brought out a bottle of Soju. It tasted almost like nothing. There was also a bottle of Jack Daniels floating around but I didn't want to have a repeat of last year. Sunday's at D2R2 are made for hangovers, not Saturdays! 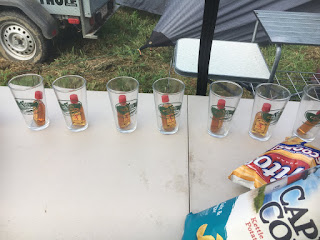 Also, there were 9 fireballs lined up for everyone after they finished their ride on Saturday.
The Jiffy Pop popcorn on the propane stove came out great! 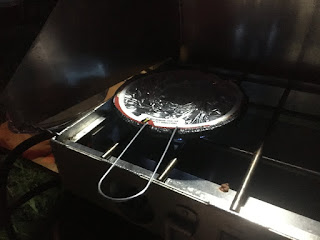 The plan Friday night was to stay up till 10 PM when Sandy Whittlesey would publish the Mystery Route GPS files, however, the rain killed that idea.  While we were eating and drinking everyone was checking their weather apps and one thing was clear, there was a big storm headed our way.  So we broke down everything. Packed all the tables and chairs under Rob's canopy and headed off to bed. The rain storm was insane. Despite the weather I think we all had a good time and we hadn't even started the best part of the event yet.
at 9:19 PM

Hey! I was the guy set up next to you with the black Honda Ridgeline. towards the end of my ride I rode with Mike from Newtown..If you see him, tell him I say hello and thanks for keeping me going those last few miles! I hope to see you guys again, maybe next spring at the farmers Daughter!
Spencer from NY