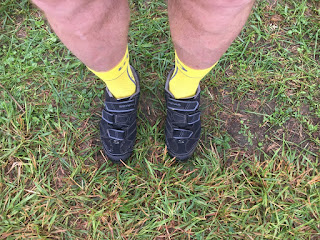 The first thing we did Saturday morning was download the Long and Short Mystery Routes and then it started to rain! 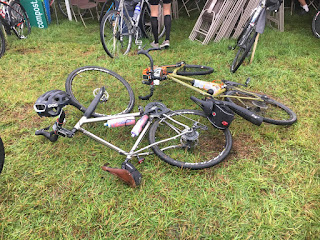 The weather report was saying rain in the morning and a midday shower. This was turning out to be the wettest D2R2 on record, for me, however not the wettest gravel grinder. 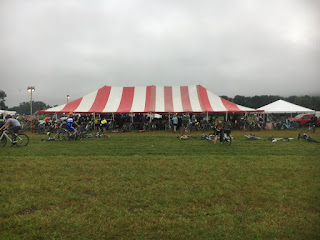 It rained for an hour while we were getting ready.  Will, Mike, Paul and I had would be leaving the start gate around 7:30 AM, so around 7 we headed over for breakfast. 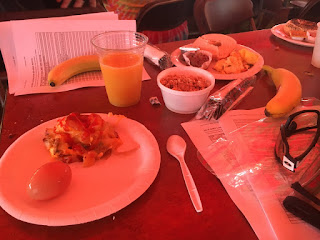 It had stopped raining but the forecast was for rain showers around noon so we all got ready while eating breakfast in the fest tent, that meant putting the cue sheets in zip lock baggies. I liked the later start, however, we would pay for it at the end of the ride. 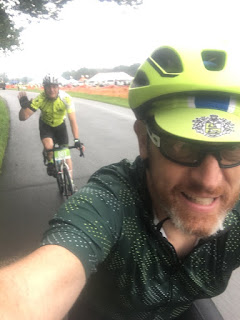 At 7:57 AM, Mike, Will, Paul and myself rolled out of the starting gate and headed south on Mill Village Road.  The roads were wet and it was really humid out. After making the turn at the stone house we were assaulted with the lovely smell of cow shit as there was a feed lot on the side of the road. 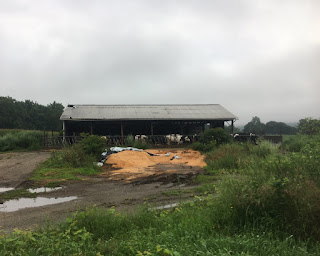 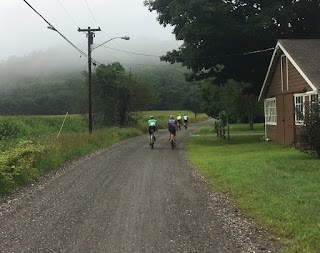 Up until hitting the first dirt road the route wasn't very climby and we maintained a good pace. I recognized many of the roads that were riding. 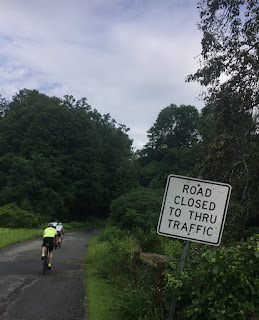 One of my favorite sayings 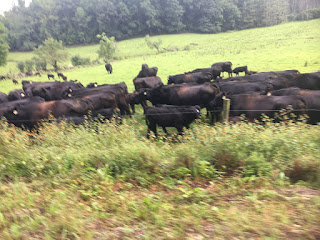 And there were more cows! 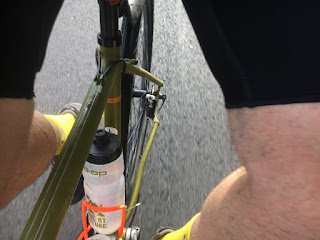 What's this? A little sunshine.
But it didn't last, unfortunately. 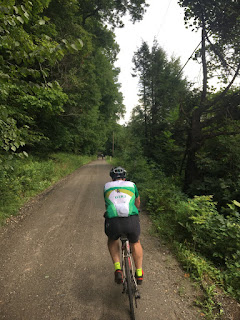 Heading down into Buckland on a paved but washed out road, reminiscent of Schemerhorn Hill in October Mountain State Forest, we came across a scene where a rider crashed.  He was bloody and seemed to be semi conscious. Seeing that reminded me to slow down a bit in these wet conditions. 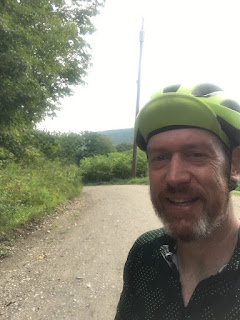 The first really hard climb of the morning was Orcult Hill. It starts out at 9% and tops out at almost 16%. I will admit that I asked for Granny's help and she came through although I didn't set any new records on that climb! 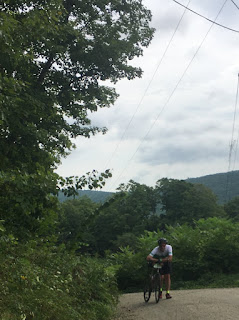 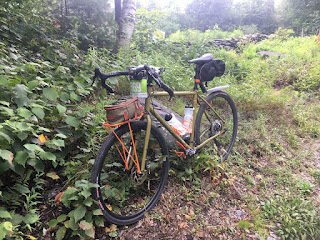 20 miles into it's first D2R2 and my new REI Coop ADV 3.1 is a gravel machine. Big tires and sturdy wheels makes bombing down D2R2 descents a dream. The new Brooks Carved Cambium saddle I put on it recently worked out nicely however I wished that I had a chance to ride with it before today. 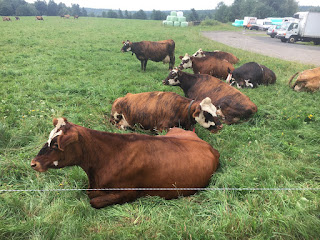 The cows at the first rest stop new a storm was coming. After eating pickles and drinking the brine, stuffing my face with cookies, Fig Newtons, and a banana we headed out for the East Road descent. Due to the wet conditions I took it slow and I am glad that I did because there was so much traffic! First there was car from NY where a guy was taking a picture of three women, maybe they were his family, in the middle of the road. Then there were a 5 or 6 mountain bikers climbing up the road. I thought that is what the chairlift at Thunder Mountain was for. Towards the bottom of the hill after it turned to pavement there were all these people on the side of the road and a huge bus in the middle of the road. Turns out there is Buddhist Monastery or school located there now called Maha Siddha Nyingmapa Center. It must have been change over day. I almost took at a wizened old woman. 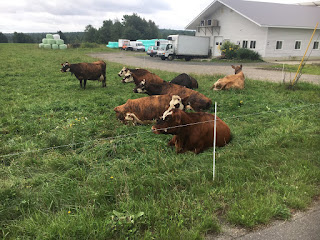 Climbing up Lagate Hill was fun and somewhere along the way it started raining. I was too hot and sweaty to bother putting on my rain jacket.  The rain felt pretty good.  At the top of the Hill Paul was waiting but Will was long gone.  Mike eventually joined us but then took off again. After awhile I lost Paul and came upon Mike who was trying to stretch out because he was cramping again. He was not a happy camper. I finally made it to the lunch stop and Mike was only a few minutes behind. It was only then that I put on my jacket because I was getting a chill. 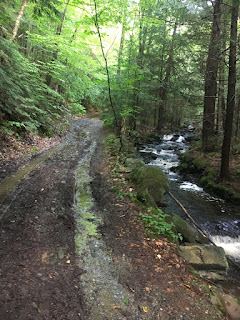 At lunch, Mike decided to take the Short Mystery route back, so Paul, Will and I headed off towards Vermont.  Somewhere along the way Paul got ahead of us but we caught up to him on a short climb in Halifax, VT and then we all entered the Shadow Lands, the Long Mystery Ride's first Hike-a-Bike section. 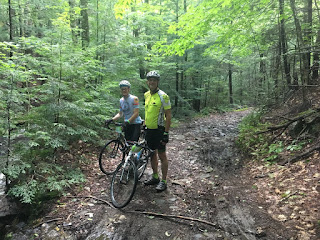 The first really tough terrain along side a rushing brook. I didn't mind this compared to the first Mystery Ride Will and I did back in 2016 which was a virtual Napoleon's Death March.  On the way in it was rideable but when it started climbing, given the wet conditions, we all felt it better to just walk up the hill. 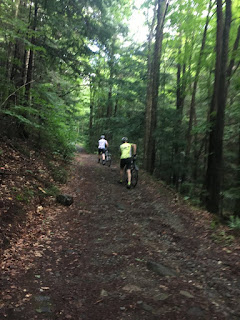 At the top of Jacksonville Stage Road I recognized the intersection with Old County Road that if you headed north on that road it would bring you to the Green River and probably the easiest way back to the start but in my fuzzy head I didn't come to that realization until a few miles down Stowe Mountain Road. Paul had said that he wanted to bail out on the course and head back.  Eventually he did but that was further down the course. 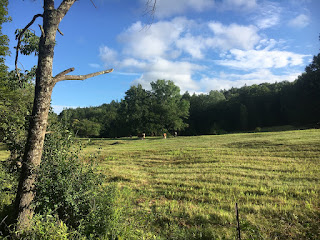 The sun came back out when we crossed back into Massachusetts and got to the second to last rest stop as they were closing. We thought we were the last ones on the course when a big group of riders showed up behind us. After stuffing our faces, once again, we conquered Stark Hill.  That climb was tough, especially that late in the day when the Give a Shit Meter is pegged and you really want the ride to end so you can have a nice cold beer.  We persevered and pedaled on. 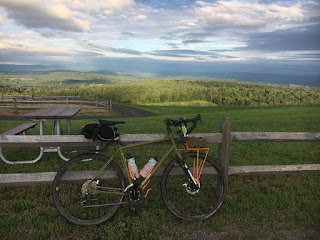 Paul broke off from us when we started climbing Van Nuys Road. My phone was dead so I couldn't tell if he sent a text saying that he was bailing on is. Will rode partway down the hill to see if was coming but didn't see him so we headed off.  Eventually we made it to the last rest stop at Apex Orchards.  Unfortunately, all the Peaches were gone but I had a really tasty apple and a few other snacks that got me going again. 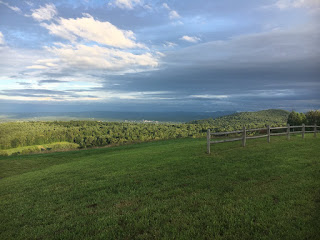 The view from here is amazing!  Now we just had 10 miles to go and I couldn't wait to get back. After crossing Route 2 we made our way onto Lucy Fiske road which turned into South Shelburne Road.  At the intersection with Taylor Road a Bull Terrier ran out after Will and his owner was a little slow in getting the dog under control. With the waning light we headed down Old Albany Road which, in the dark was a land mine laden descent. 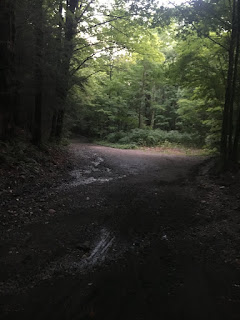 Towards the bottom, one of the guys from the group that came up behind us at the last rest stop wiped out but was OK. I stopped and waited for Will. Eventually he came down but said he had endo'ed but said he was going slow and didn't get hurt except for some minor cuts on his leg and dirt in his face. His glasses were a little scratched, too. After that it was a nice downhill to the Deerfield River and a flat ride into the finish! 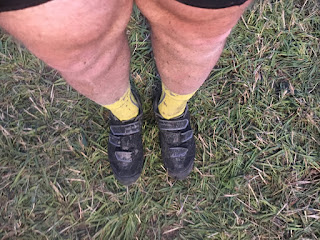 That first beer after successfully completing my first D2R2 Mystery Ride never tasted better.  While on the second beer I ate dinner and it was amazing food. Back at the camp, Will said his farewells and I sat back and relaxed and had a few more beers. That was the best ride ever!

Mike couldn't hang with the big dogs. Maybe next year...

Hey Mike! Its Spencer (the old guy on the orange Troll) I want to say thanks for keeping me going those last 10 miles last Saturday! It was nice to ride with you!