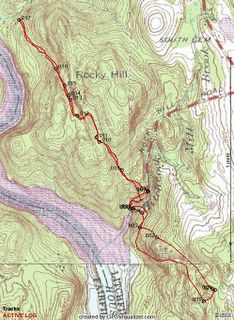 Finally got over to Bridgewater to ride this place. I have been looking at it online for quite sometime and got the map from the Nature Conservancy but finding the opportunity to go off on my own is increasingly difficult when you have two kids constantly viaing for your attention.

While I studied the terrain it still surprises me every time I ride - these trails basically zig-zag up and down the ridge along Lake Lillinonah. Down hill is fun but the uphill is hike-a-bike city. I saw one other MTB'er as he was finishing his ride other than that, besides a few lost hikers (who overshot their destination) there was no one else to see.

Going from Iron Ore Hill, down, to Rock Hill Road there is a nice stream that can be forded or ridden over on a nice bridge.

The trail continues up along stream but you can also ride the road to the next trail. Apparently its been moved due to logging. Where the trail was, it looks like a grass driveway now. I suppose you could ride that but except for the climbing aspect, it doesn't seem very challenging. Coming back down might be fun but I would rather stick to trails.

Once you get to the top of the next ride, its all downhill from there to Hemlock Hill. Turned around and started to climb. It was gradual enough that I was able to climb most of it.

After passing Rock Hill on the way back, I took the red trail for less gradual climb back to Iron Ore Hill. I was able to ride most of the climbs but there were still a few hike-a-bike opportunities.

All in all, a good work out trail but lacking in flat out riding opportunities.

This doesn't mean I won't go back because there are still additional trails that have to be ridden.