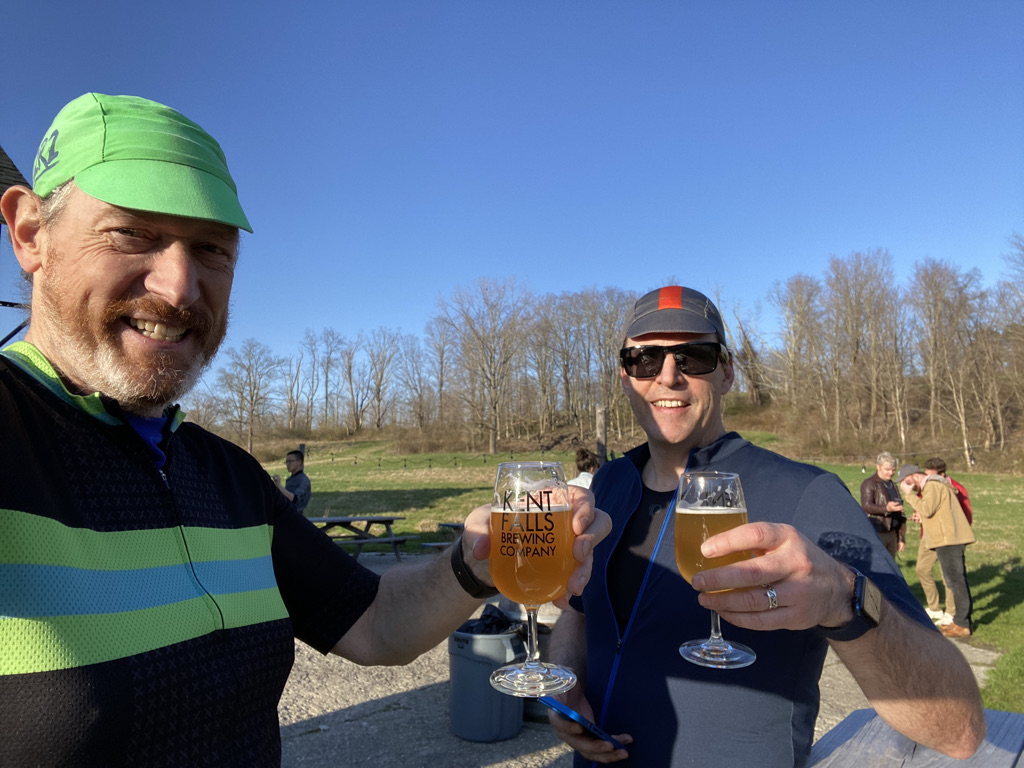 One of the founding fathers of the Newtown Lunartics wanted to start a Friday afternoon ride starting and ending at the Black Beard Bar - which is an extra room in his house that he converted, only he forgot that he promised his better half to take her to dinner. Mike and I decided to meet at the Roxbury Town Hall and ride dirt roads to Kent Falls Brewing Company instead. 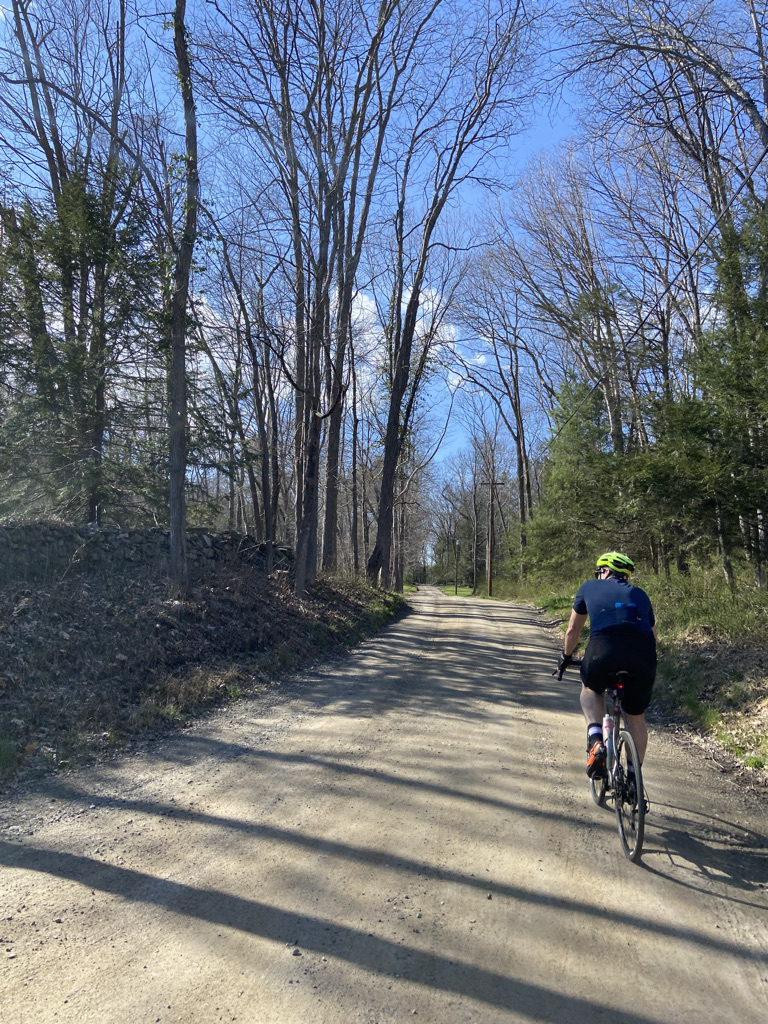 You couldn't have asked for a better day! 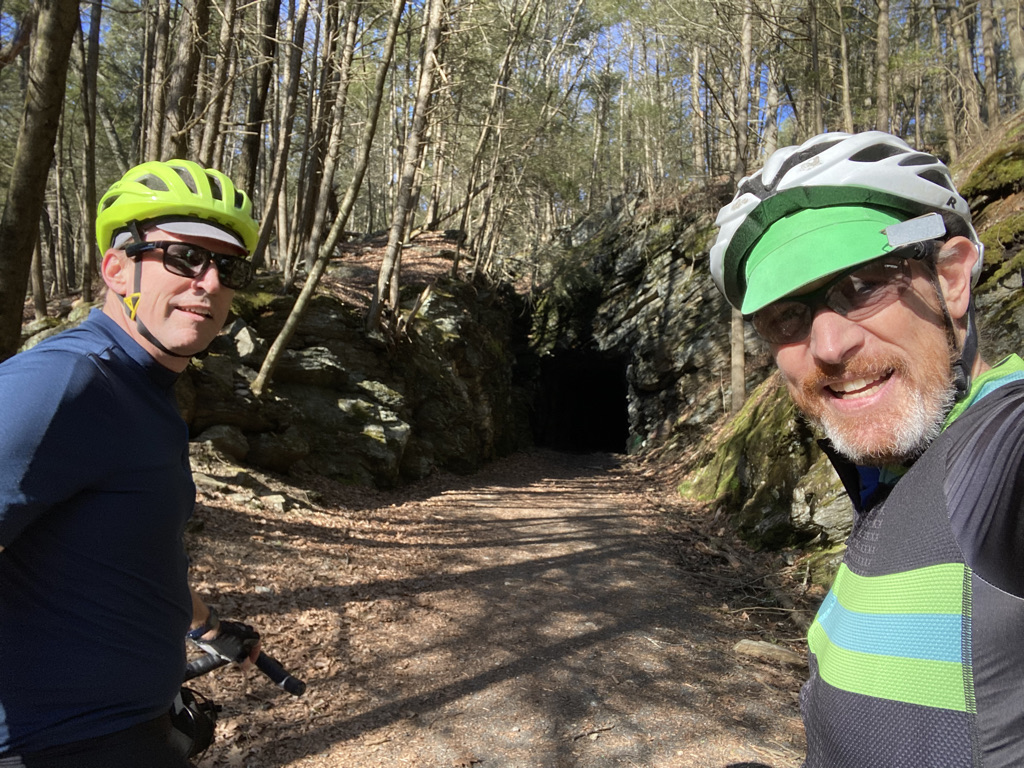 The best route from the Market is to head north on Judd's Bridge and then cut over to the old Shepaug Railroad bed that runs through Steep Rock. 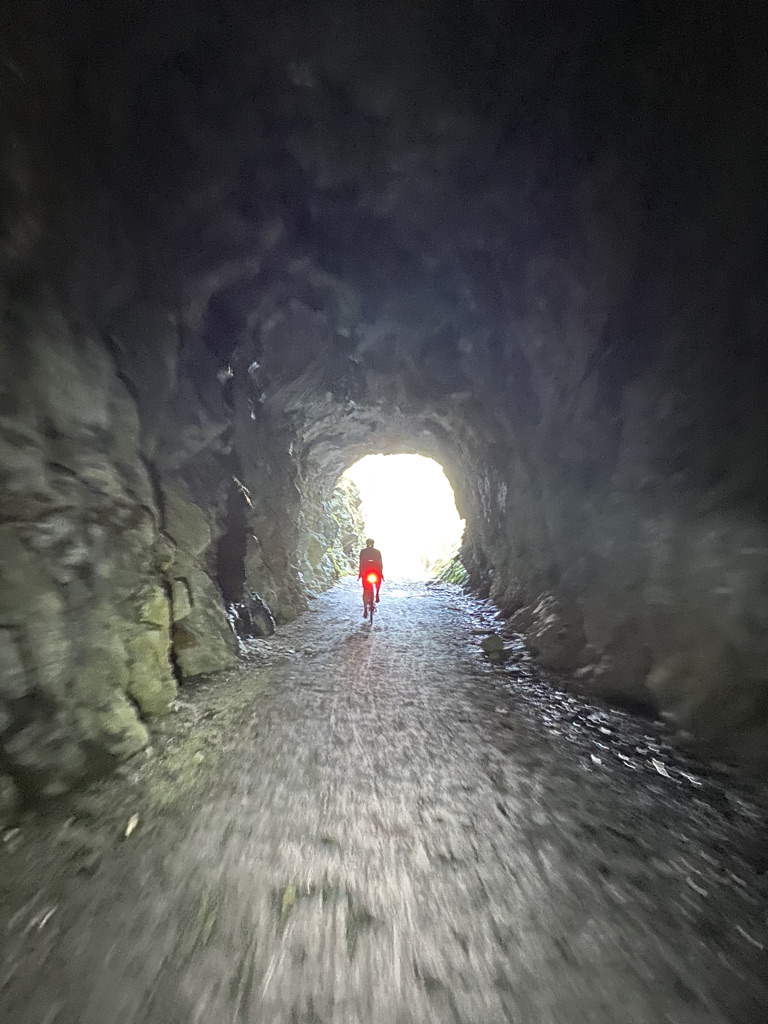 I love going this way because you get to ride through the old railroad tunnel. After Steep Rock we continued north into the Hidden Valley Preserve. 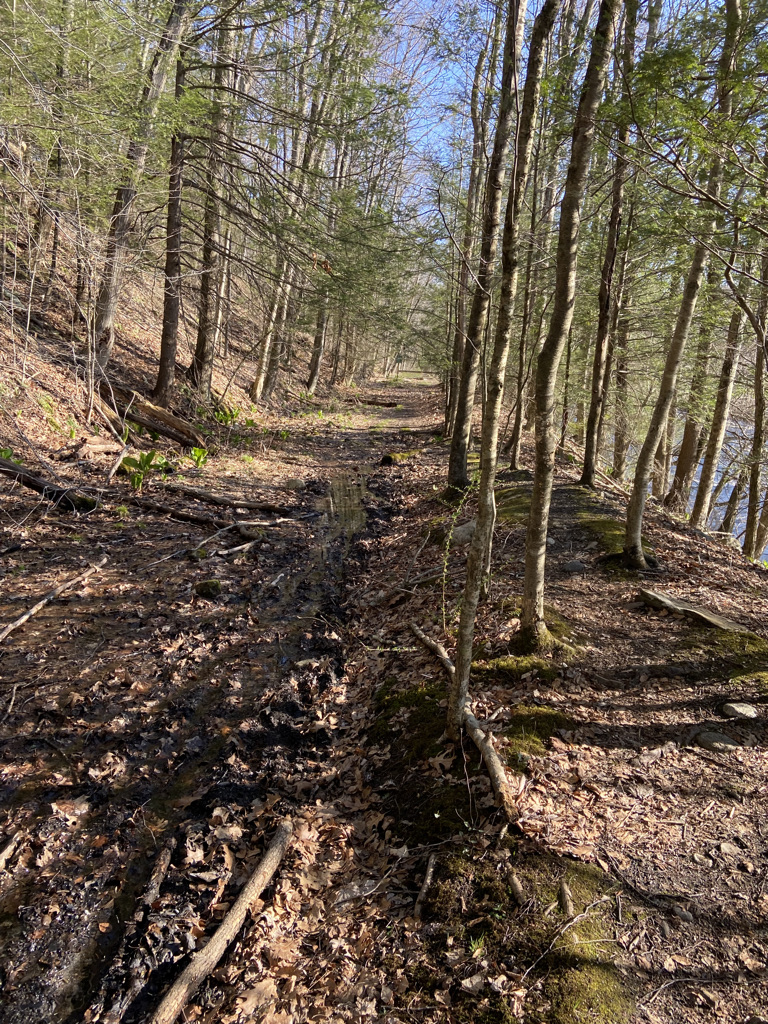 There is one section after the gate that is always pretty sloppy but if you stay on the little berm between it and the river you can stay dry for the most part. 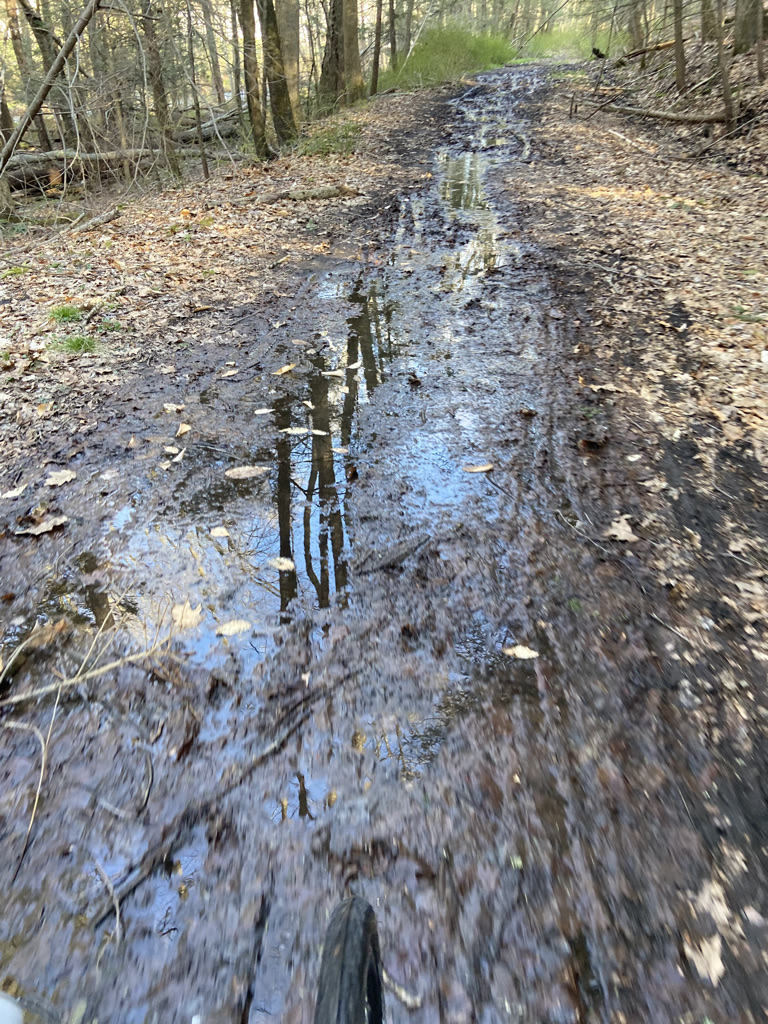 However the rain from the Thursday night made other sections of the trail that aren't usually wet a nightmare. 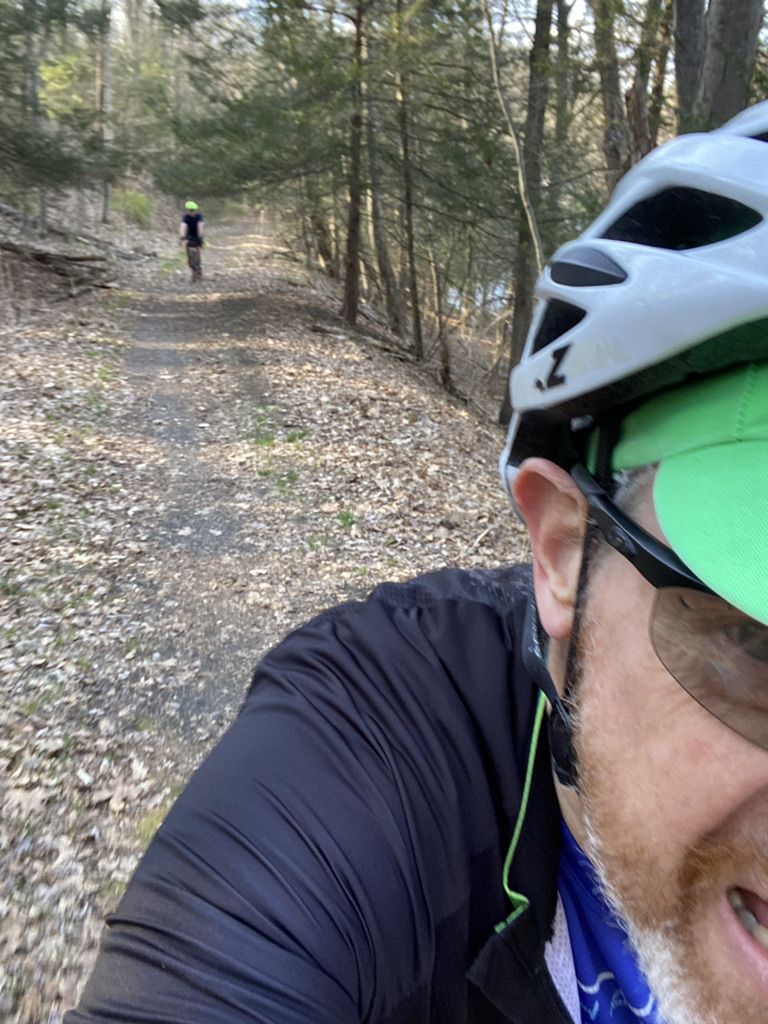 We came across two groups of people using this part of the trail. Two guys on the river bank smoking pot and two women walking away from the school that were really rude and wouldn't make way for us coming up the trail. 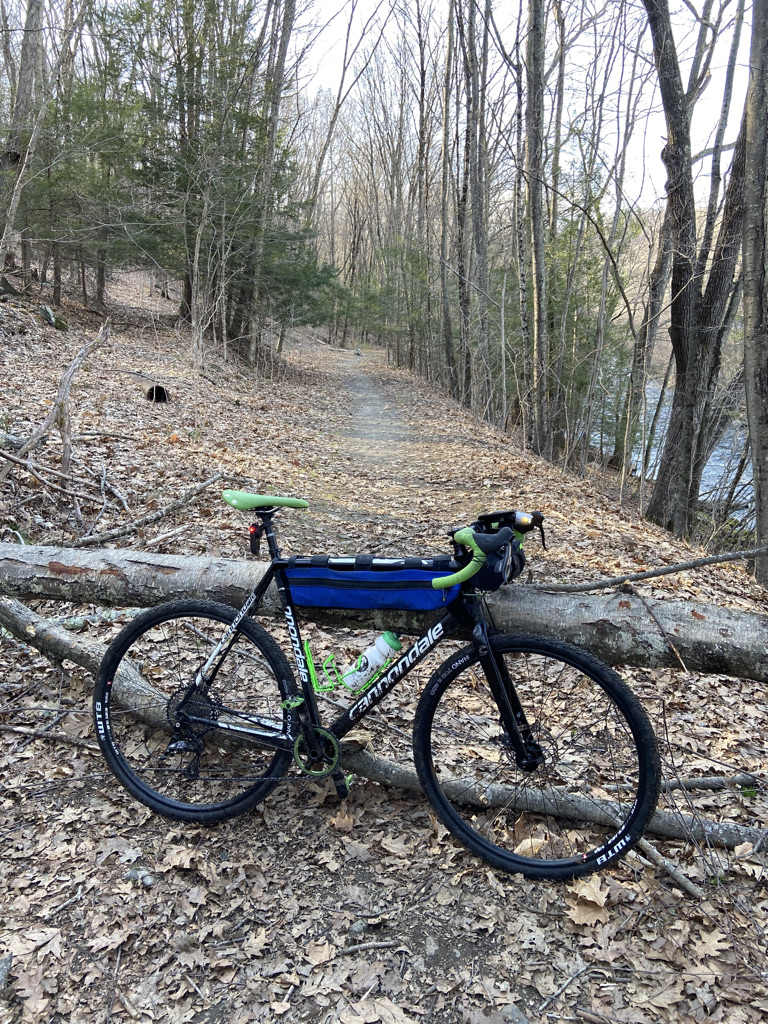 I had noticed from someone I follow on Strava that there was a tree down on the railroad bed and it's still down. All the other trees that had been hanging low over the bed had been taken care of but they were that way for about a year so I wondered why it took so long to do something about them.  This tree has been down for a couple of months and how long will it be till it is addressed? 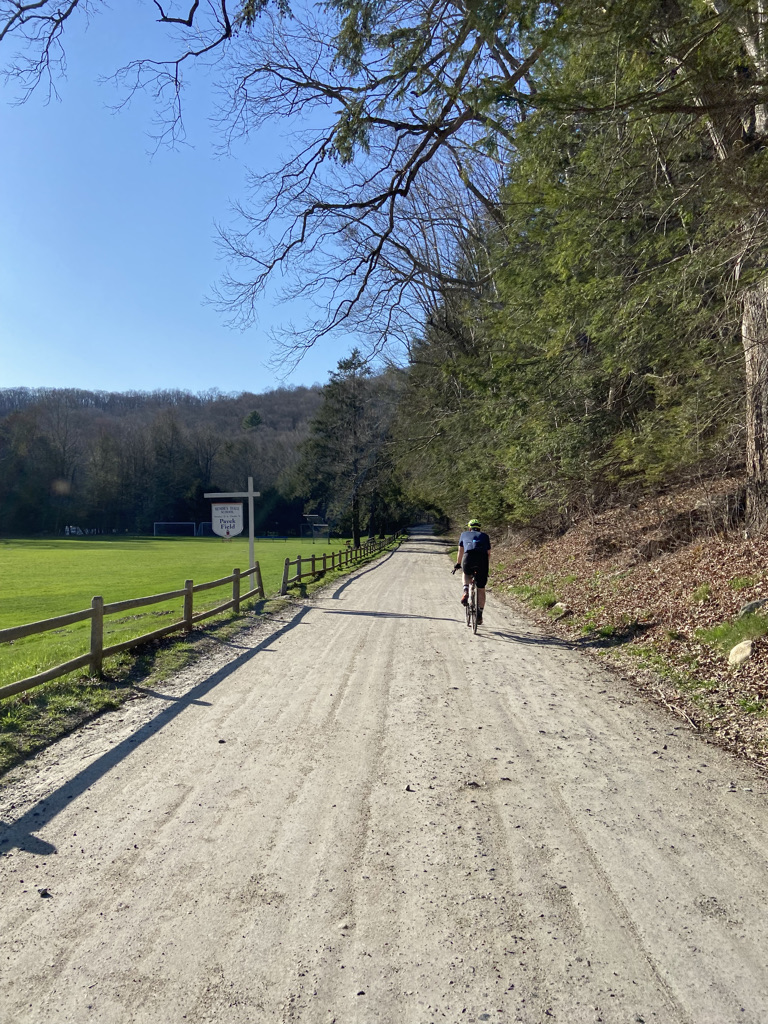 Riding through Hidden Valley is really shady and it started to get cold but then heading up Whittlesey we warmed up in the sun again. By the time we climbed up to the Money Shot, we were sweating. 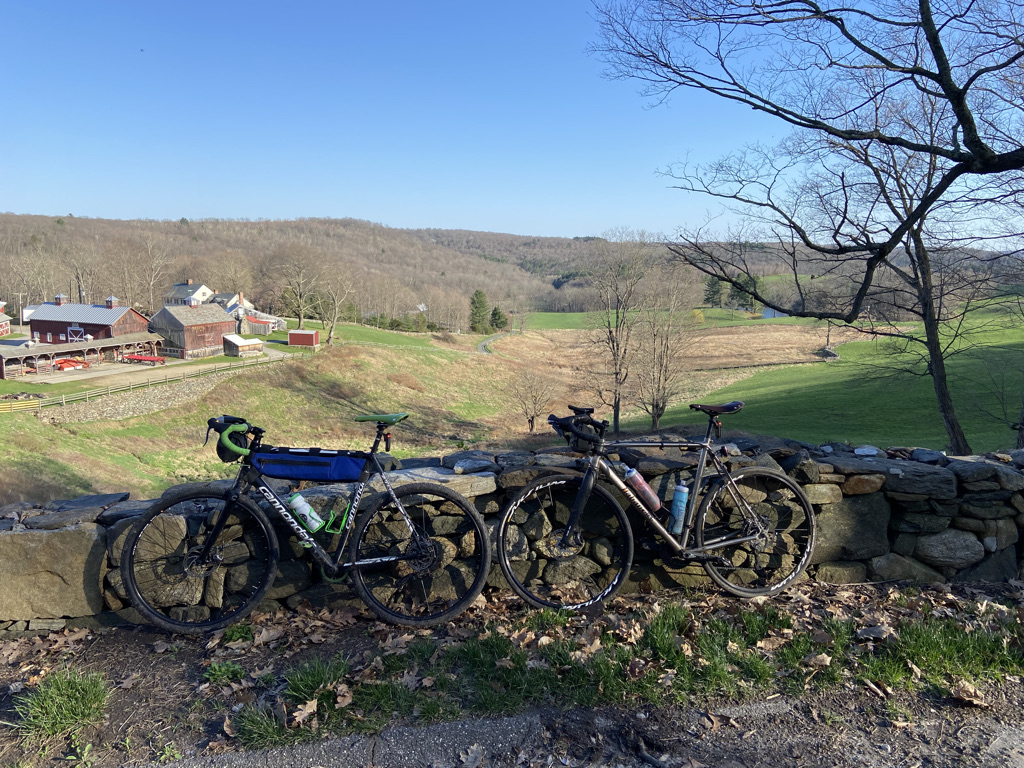 I call this the Money Shot because it's one of the most spectacular views of the valley that you can get to by bike. 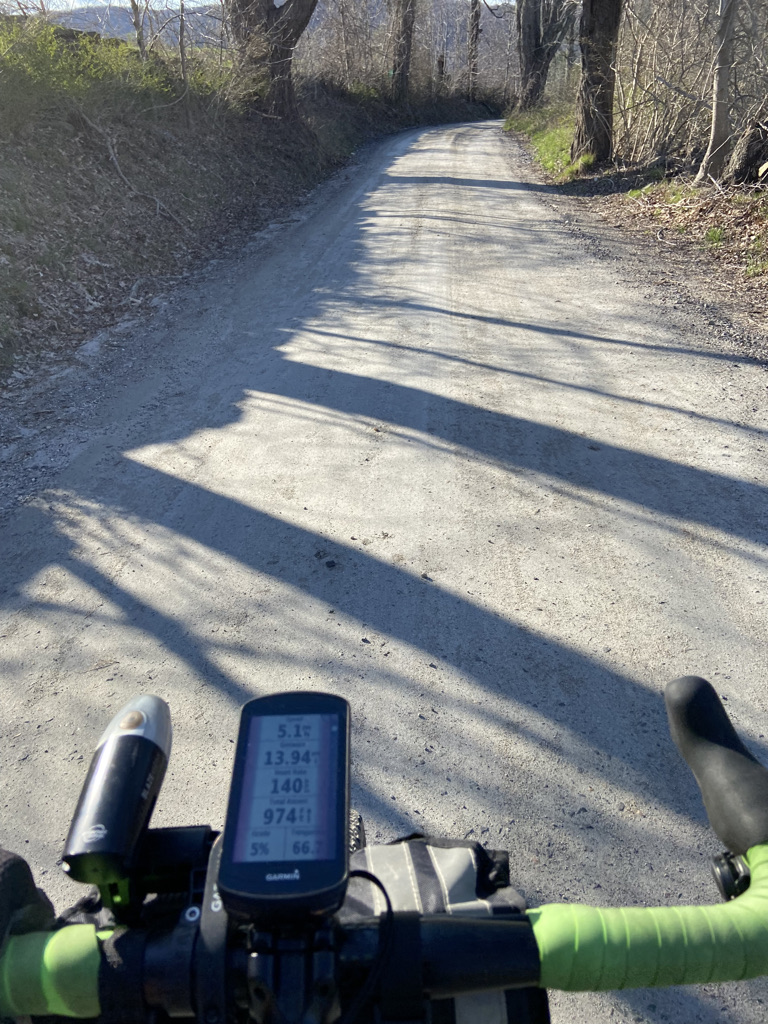 Whittlesey is a bear of a climb and at it's steepest point its almost 20% but it's short so it's not that bad. 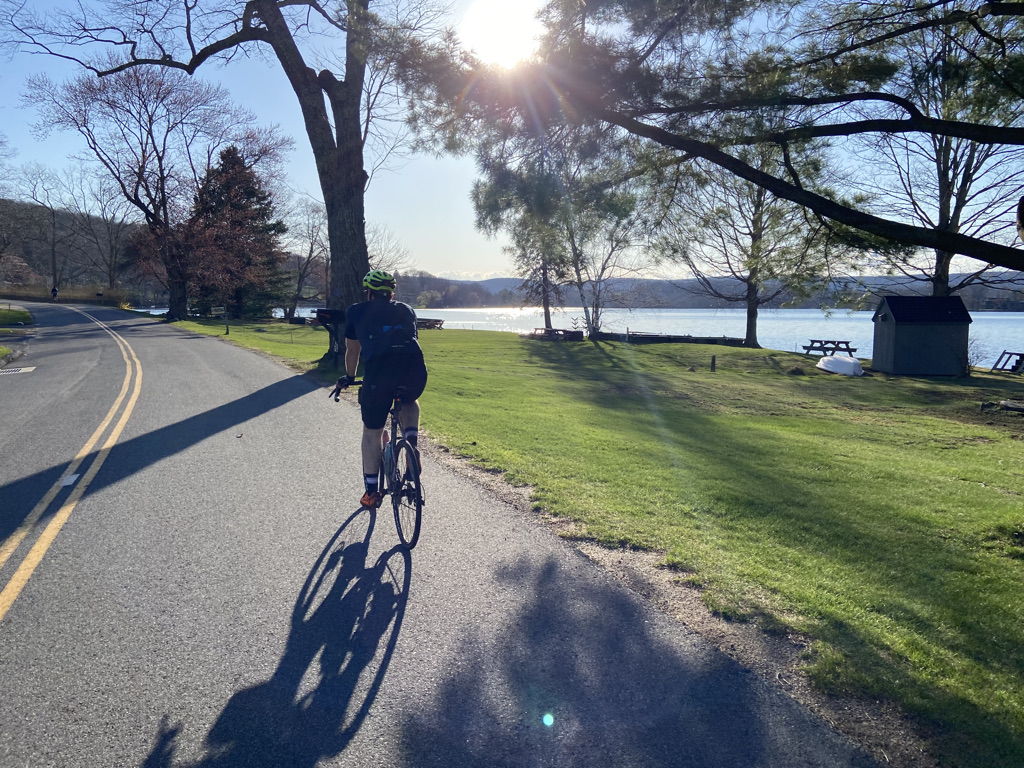 If there was more time we would have ridden the north shore but it was almost 6 PM by the time we got to Lake Waramaug so we opted for the quickest way to the brewery. 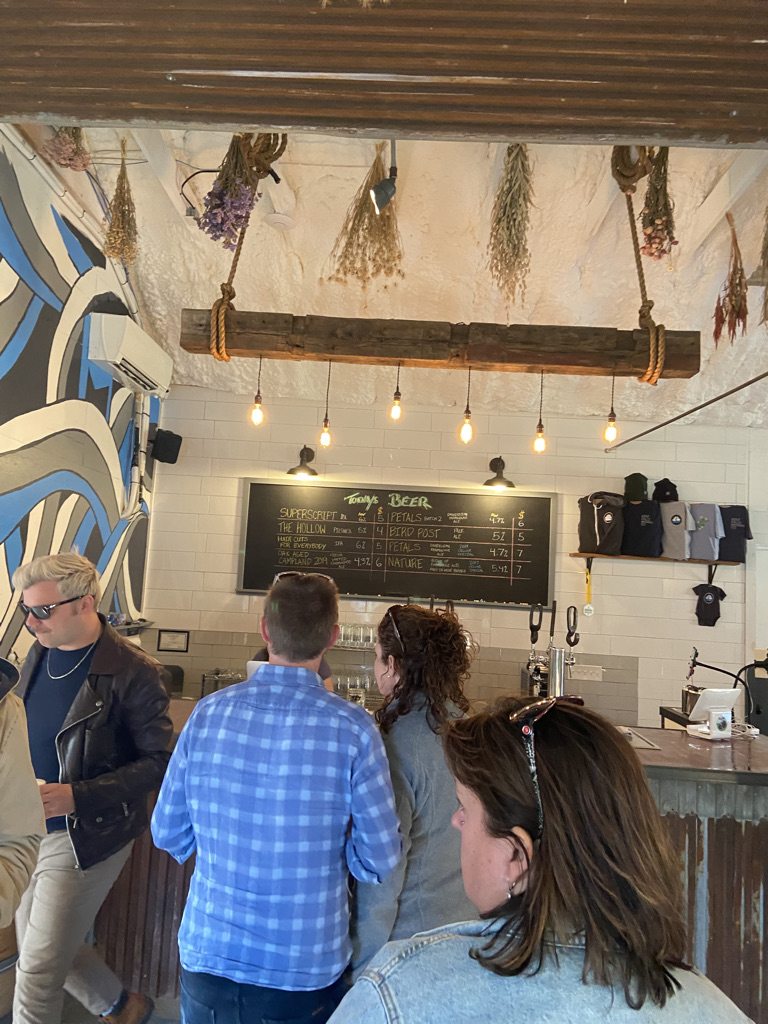 The brewery was packed! Mike and I had a couple of pints and some chips before heading back out again. 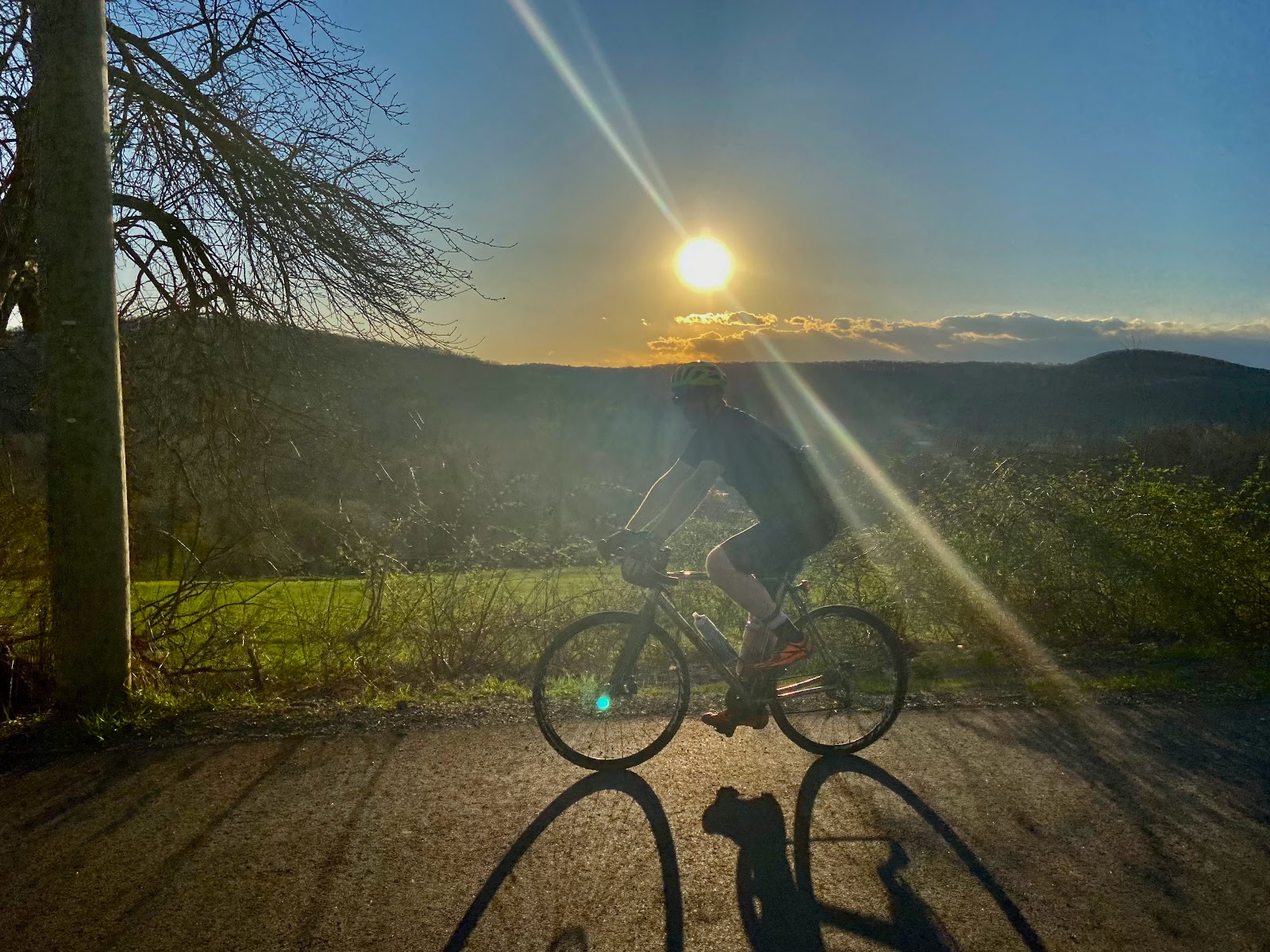 Heading south back towards Roxbury is when we hit the wall, namely a head wind that made it feel like we were pedalling through molasses. 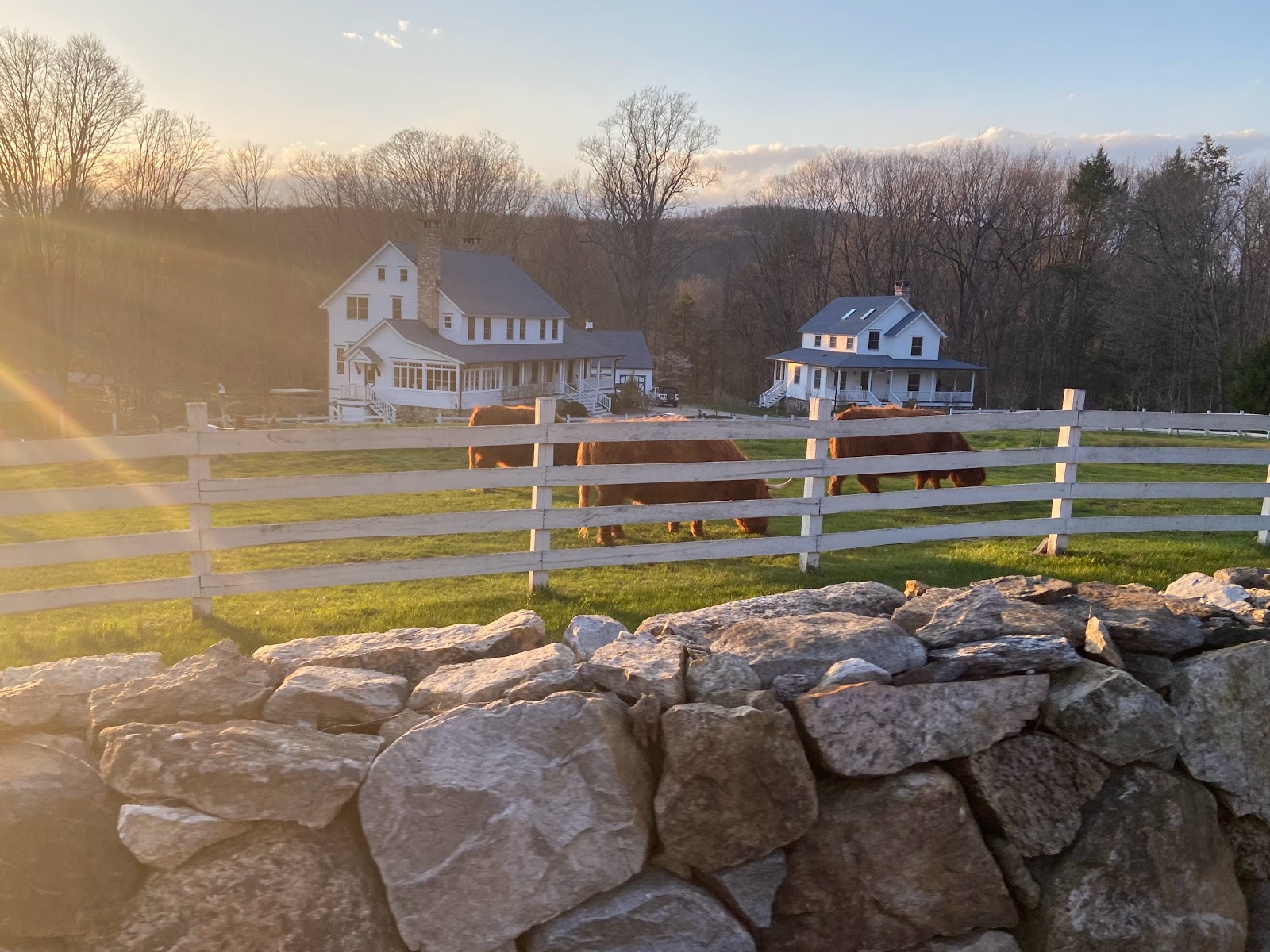 We flew down Sawyer Hill and then hopped on Rt 202 for almost a mile to ride a few more dirt roads in before making the 500 foot climb to the top of Walker Brook. 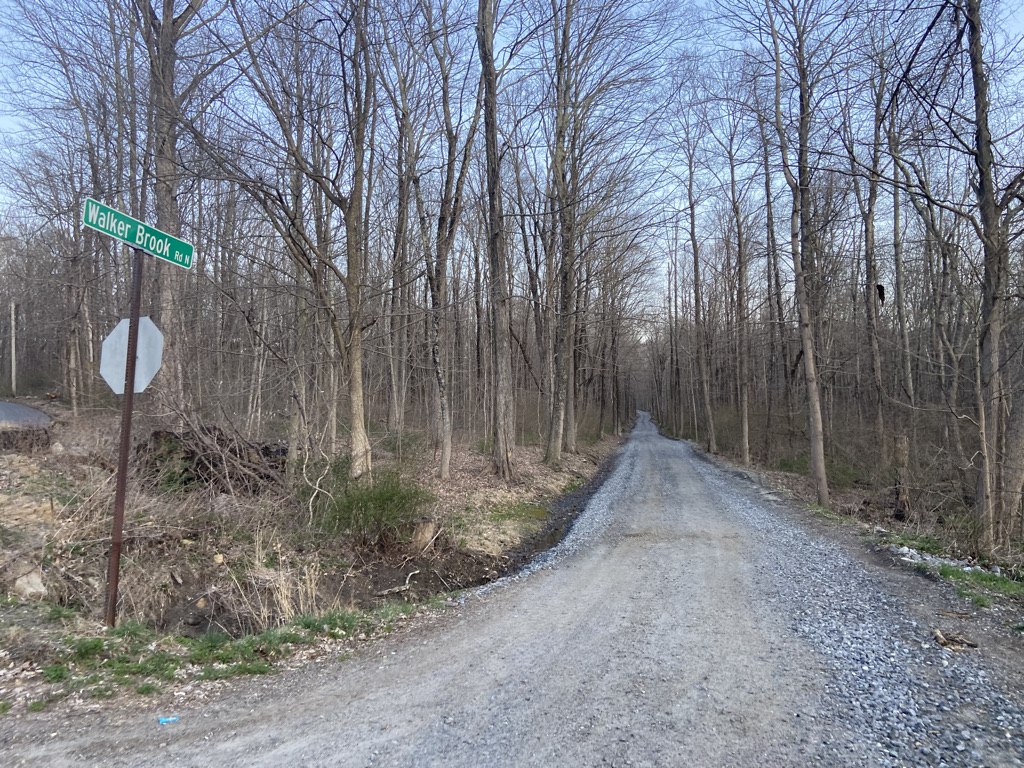 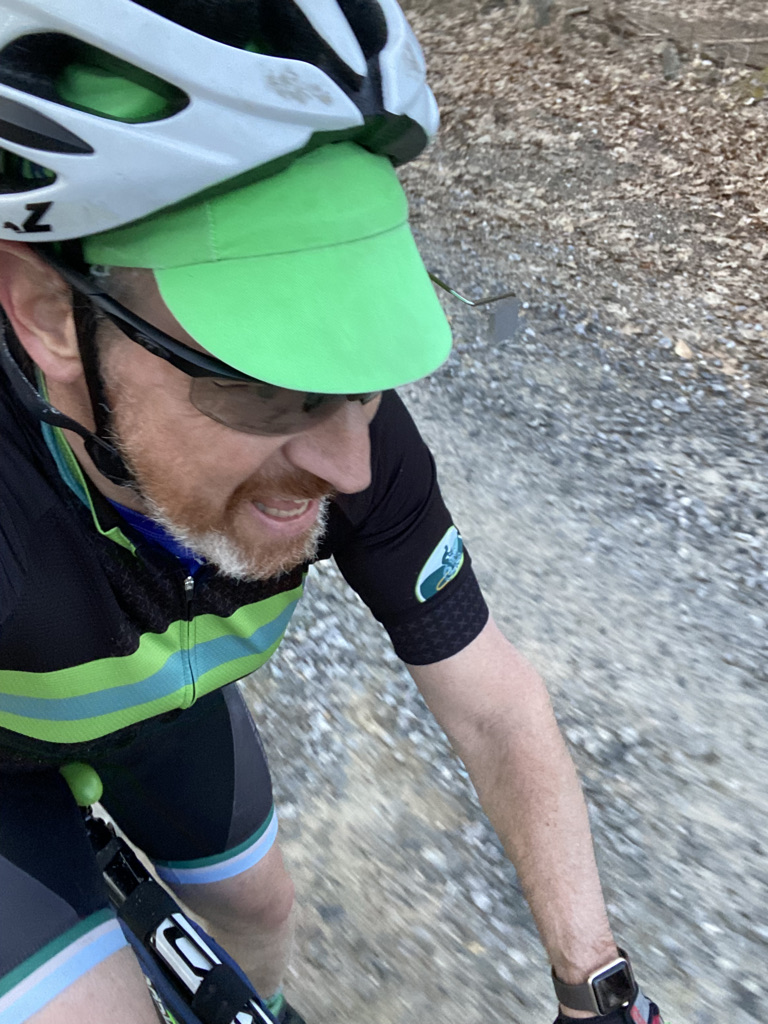 But then it's a 4 mile descent to Judd's Bridge and the best part of the ride besides the brewery. 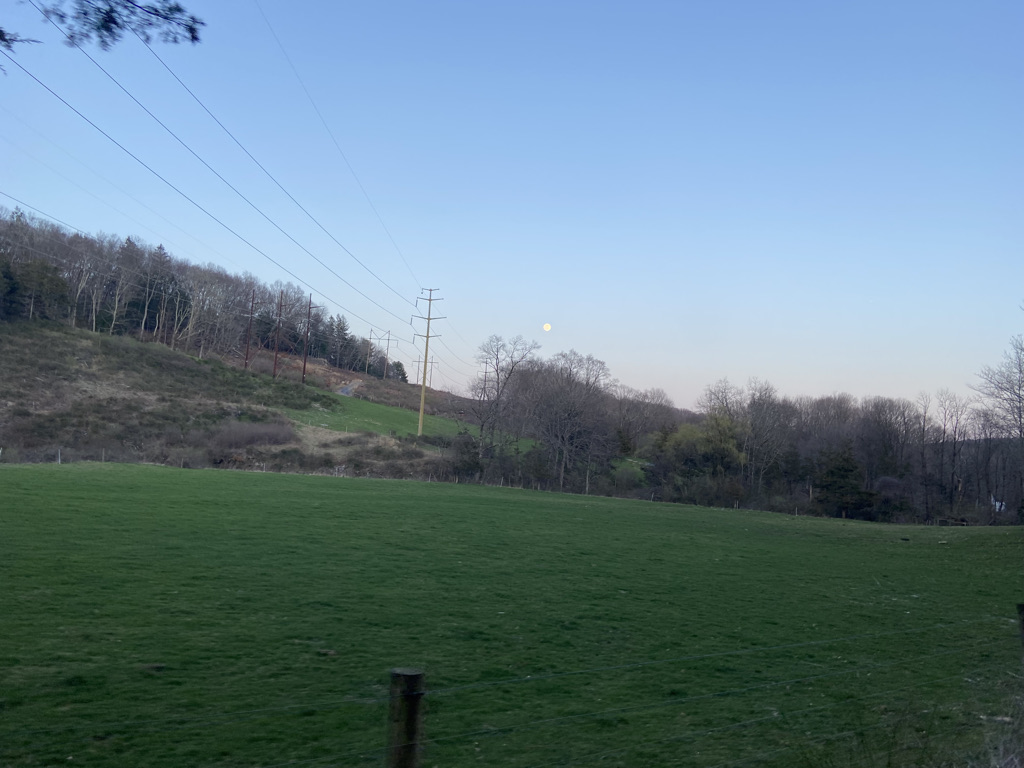 At sundown the moon was out and it looked full 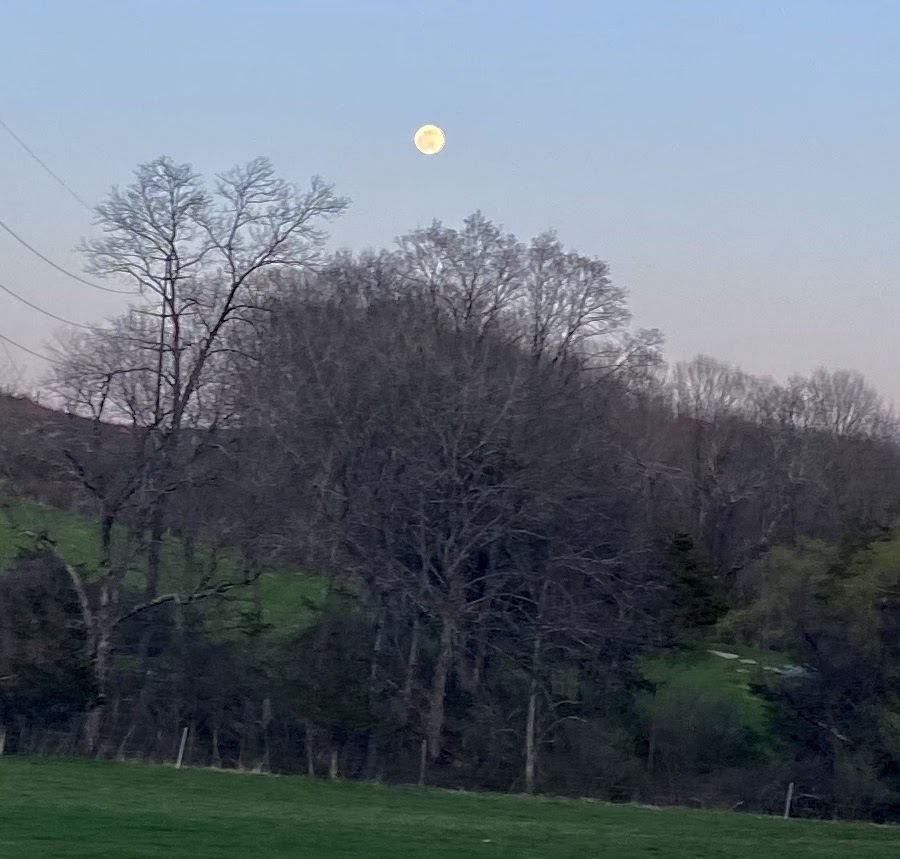 From Judd's Bridge it's 3 miles back to the Town Hall 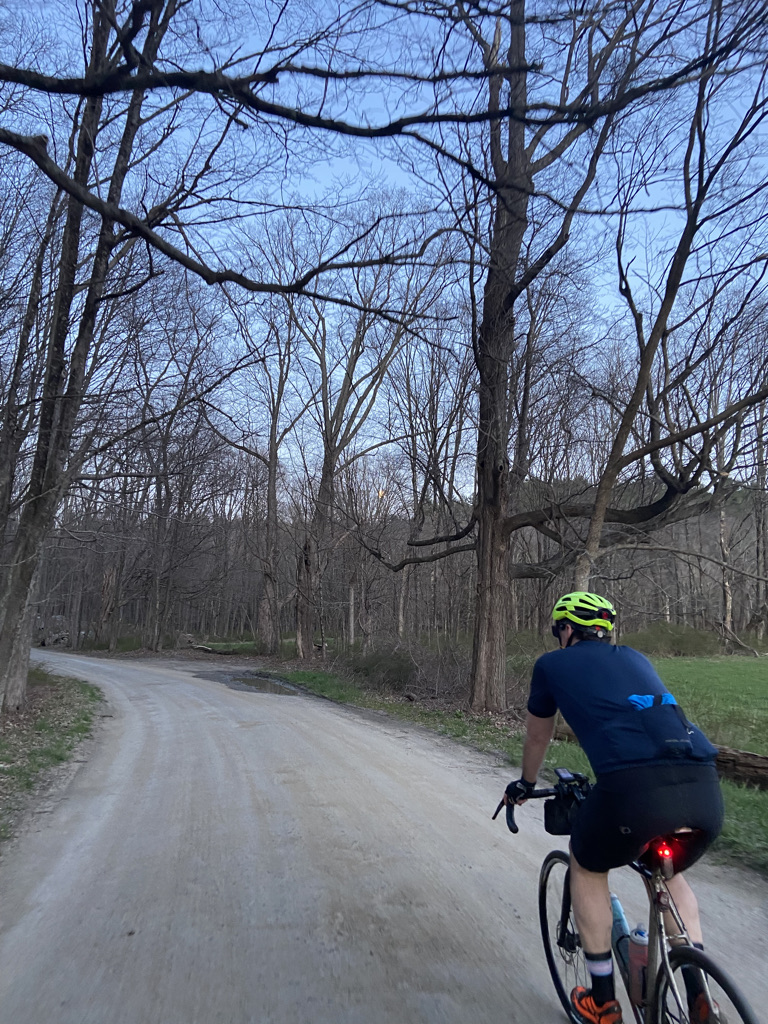 It was a shame Andy Engel couldn't join us, we have done this route many times with him. His passing weighed heavy on our thoughts on this ride.