Earlier this week I decided to remedy my seatpost issue with a recommendation that I got from a local MTB forum. The problem is on my rides, the seatpost keeps sliding down. I have tried tigthening and tightening but during every ride, halfway through I feel like I am riding a BMX. So, the recommendation was to cut up a beer can to make a shim, put it in the tube and crank her down. The recommendation was for a Pabst Blue Ribbon can but I only had MGD. Put it in and as I was tightening it down the clamp broke! Cheap POS!

Since I was working from home that day, I figured, OK at lunch I will get a new one. Called around to the various bike shops and they said come on down, we will get you squared away. First one didn't have squat but they sold me a Suntour clamp, circa 1970, to try but I couldn't get it on. Then, I went to two other shops and they had nada.

I called the LBS where I got my ride, after vowing that I would never go back there again - they are MTB unfriendly. Talk about a lack of customer service? I guess that is what you get from a bunch a roadies. Turns out they had something that fit. I brought my bike thinking that since I bought it from them they would fix for me but looked at me like I had plague. I actually had to ask, "Do you think you could put it on for me?"

The counter doode didn't know what to do so he called in one of the mechs who just didn't want to be bothered. Finally, after looking at it and looking at it, figured out what to do and got it on. If you want to know what LBS this is, write me and I will tell you, but I will say they are in Bethel - unfortunately they are the only Trek dealer around. If I get another Trek, it won't be from them.

On my way home I stopped off at some Newtown Forest Association land, Brunot Preserve, that I have been meaning to ride. Nice place that appears to been used for ATV racing and still appears to be abused by ATVs. I would think that if NFA wants to REALLY keep them out, they would do a better job at putting up barriers on the property boundary to keep them out. Only the entrance appears to have been modified. 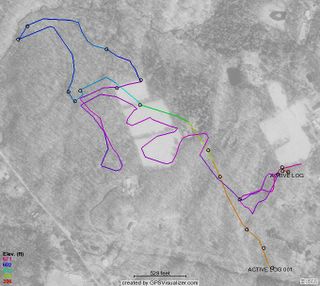 Its a nice piece of property for Newbie riding but its primarily ATV track riding. Not very challenging. I hope to ride there again to check out the rest of the trails and create a proper map.
at 5:00 PM