Gay City State Park is one those riding areas in Connecticut is great for every level of riding.  There is a great mix of single and dual track in which, from a mountain biking perspective, can cover a lot of ground.  The other big attraction to Gay City is that it abuts Case Mountain and you can also get to Meshomasic State Forest, aka Mesh. That's why the Central Connecticut Chapter of New England Mountain Bike Association has it's annual Fall Fiesta there each year. 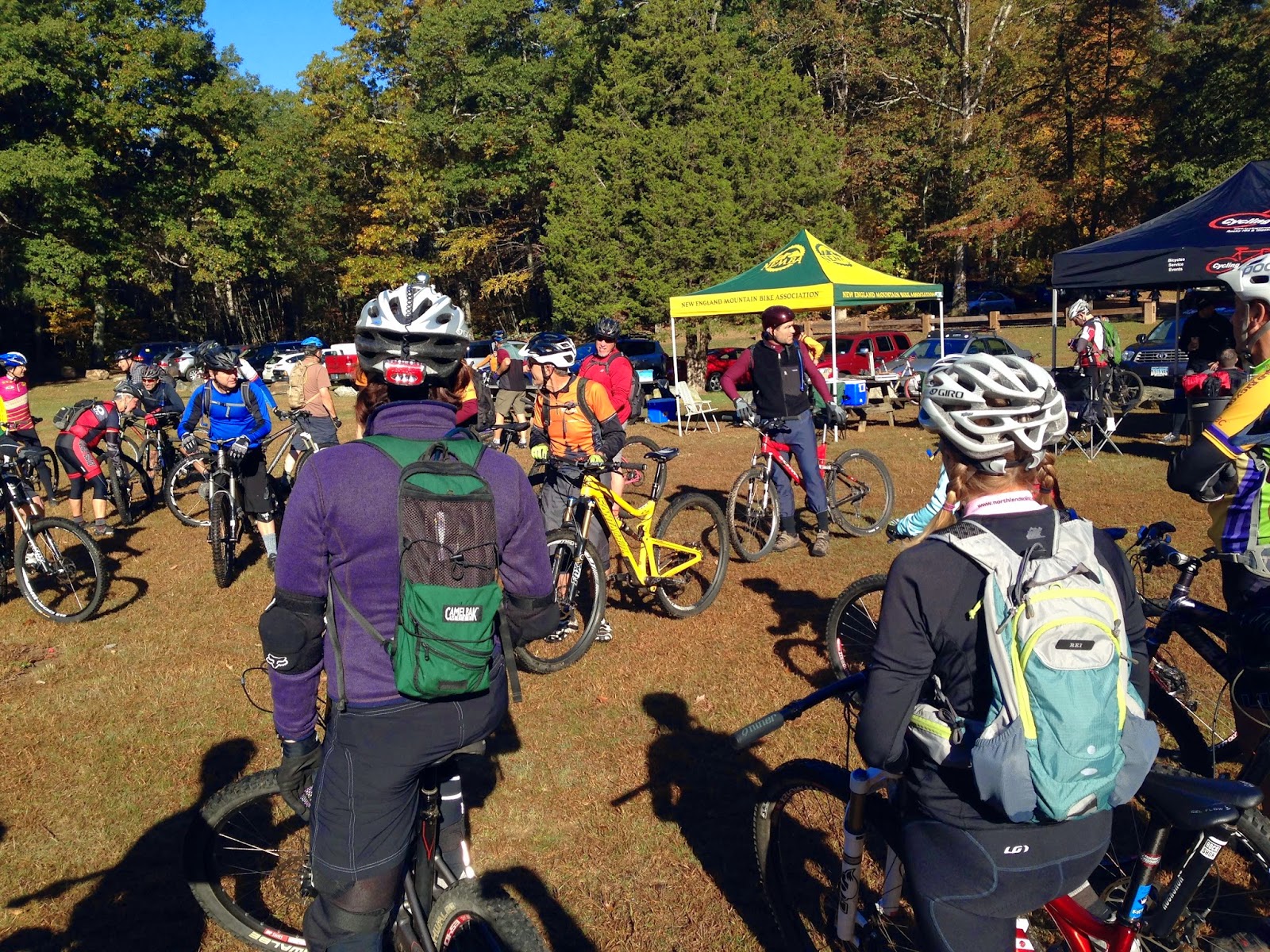 It was a crisp fall morning in the eastern part of Connecticut and not a cloud in the sky.  The amount of riders showing up this year was incredible!  With a wide range of bikes of all tire sizes.  There were still some bikes with 26 inch tires but those seem to pale in comparison with all the 29ers and recent addition, 27.5 inch tires.  And don't forget the fat bikes.  A couple of rigid bikes and even a few with front suspension forks! 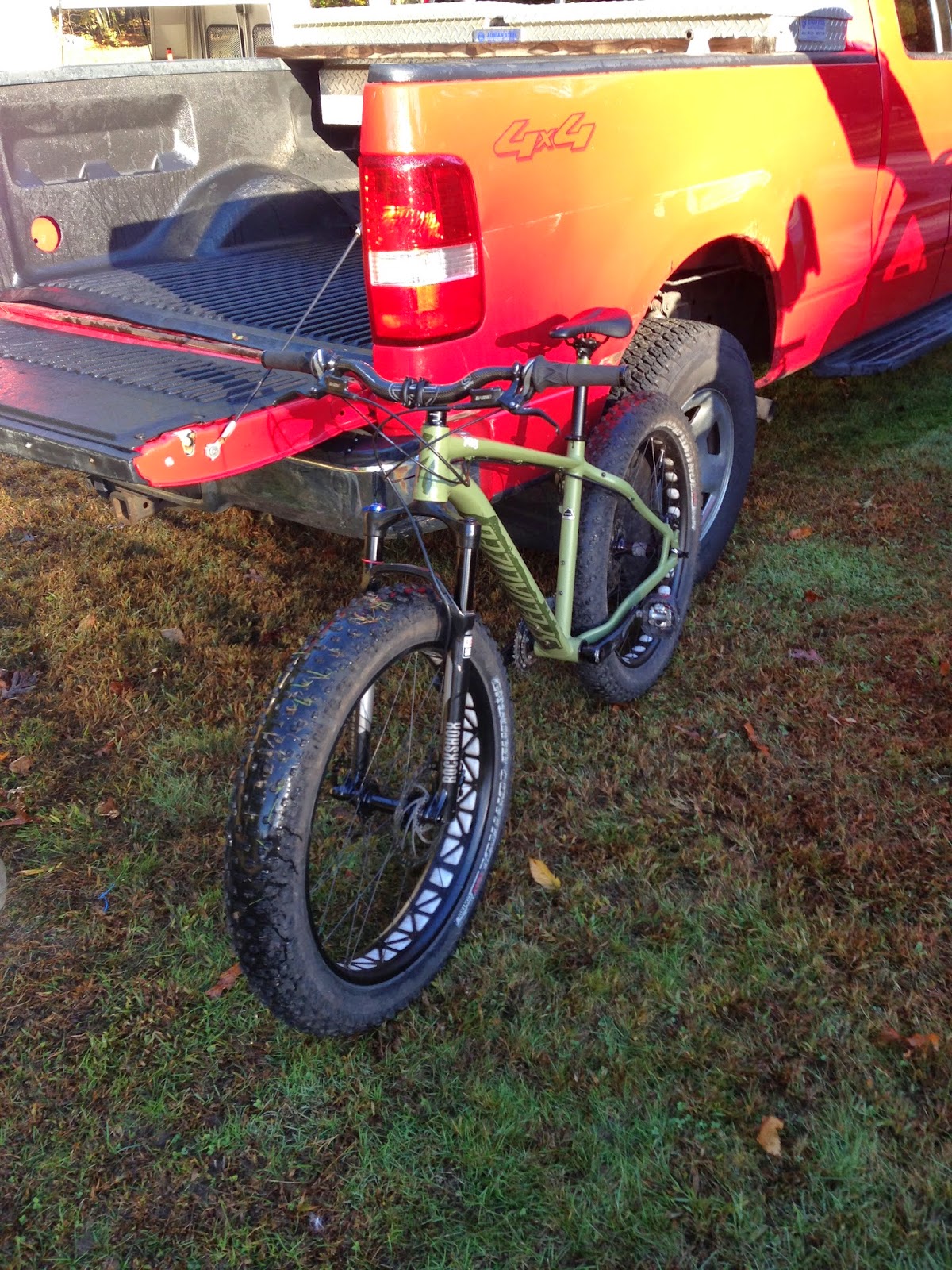 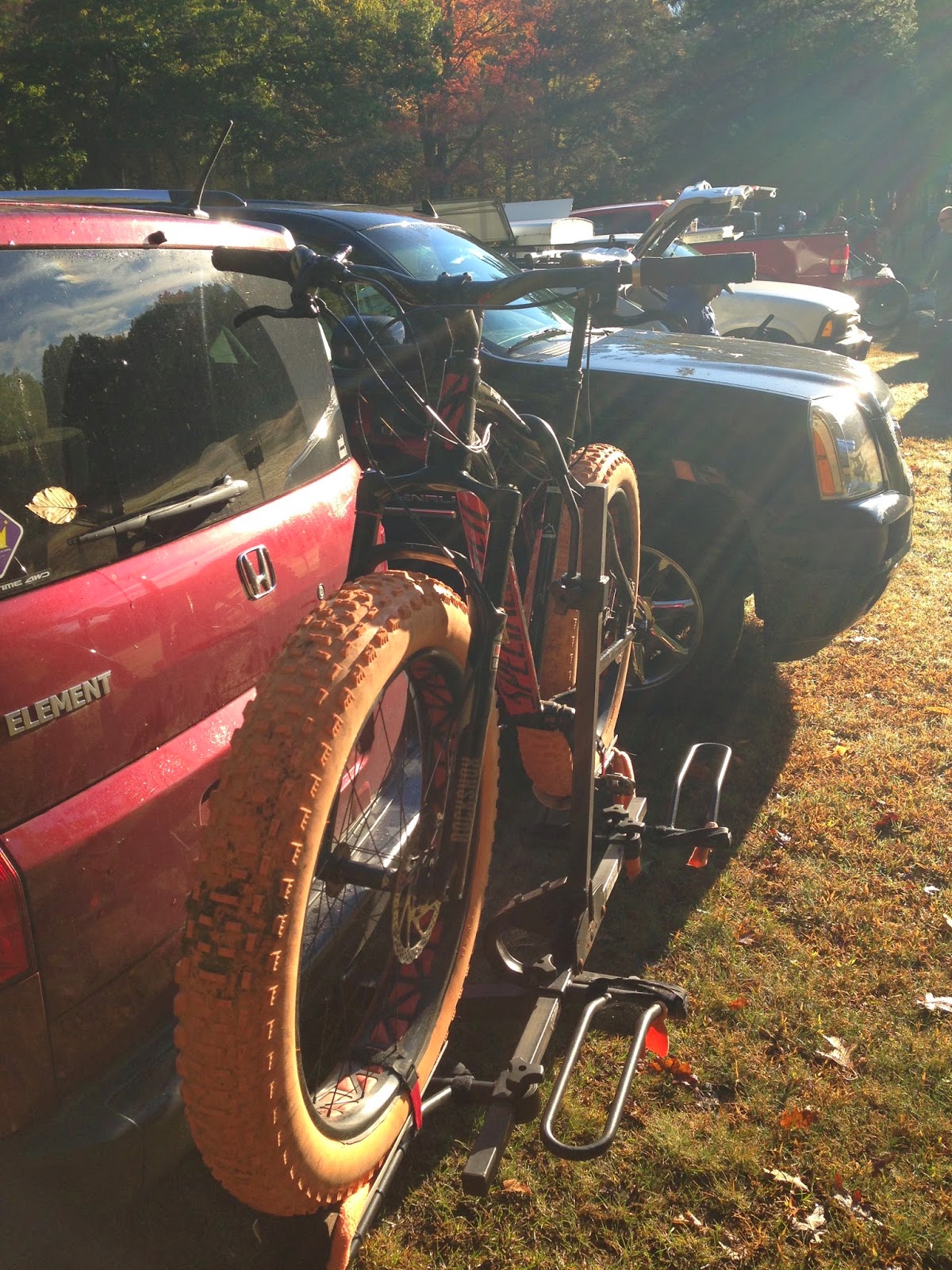 After the advanced ride took off and the other big rides left the area I hung out till 10 to take the late comers out with me which entails riding through the park and then picking up the Ribbon Trail and taking that over to Blackledge Falls and then riding back to Gay City on the Blackledge Falls trail. 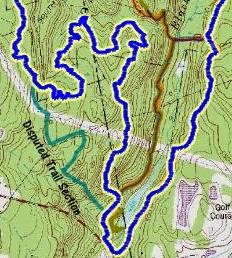 We didn't ride the Ribbon Trail last year because of wet conditions and there was an ongoing property owner dispute with a trail that came off it that made riding in that section of the park sensitive but it appears that has been squared away now with a tremendous stone wall. 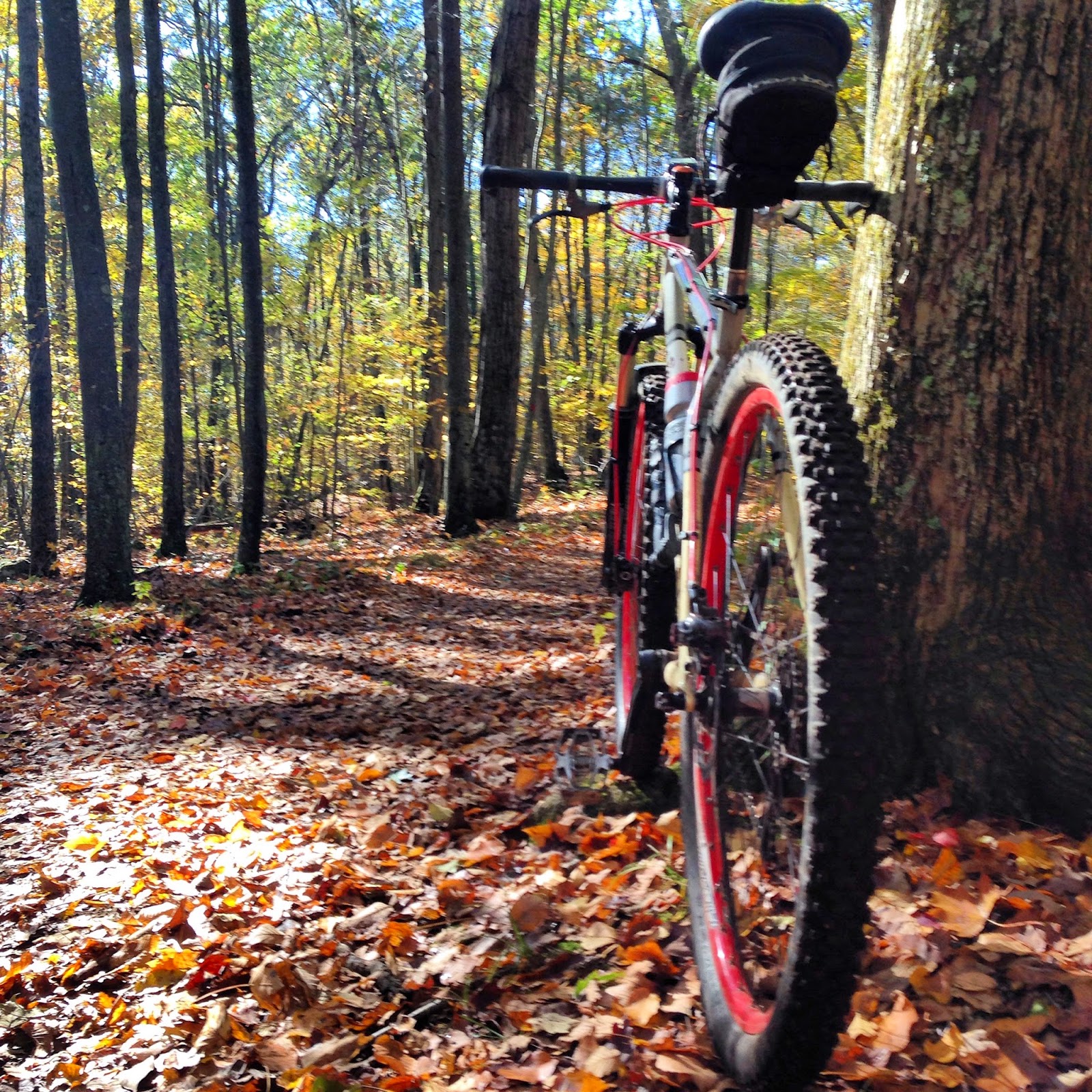 I ended up taking two guys out with me on my ride.  We headed out on the same initial loop that we have been riding for years but split off from the marked course and started the long climb towards Case Mountain.  We weren't heading into Case but that was the way you need to go in order to get to the start of the Ribbon Trail. 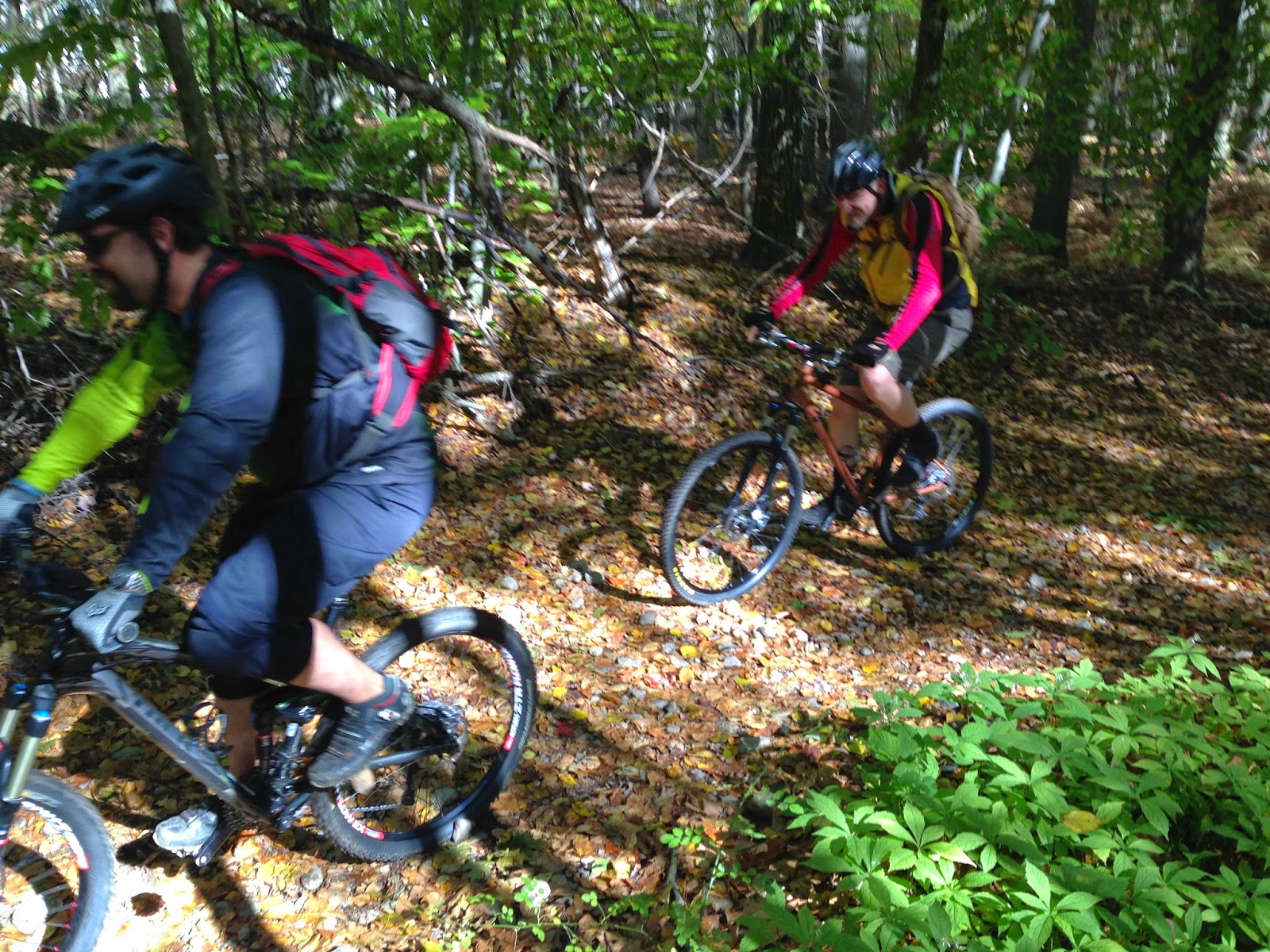 The Ribbon Trail starts off the trail that splits off from the Case Mountain connector trail.  It's a great trail that is fast and flowy with plenty of rock rollers and plenty of technical sections to test your meddle. 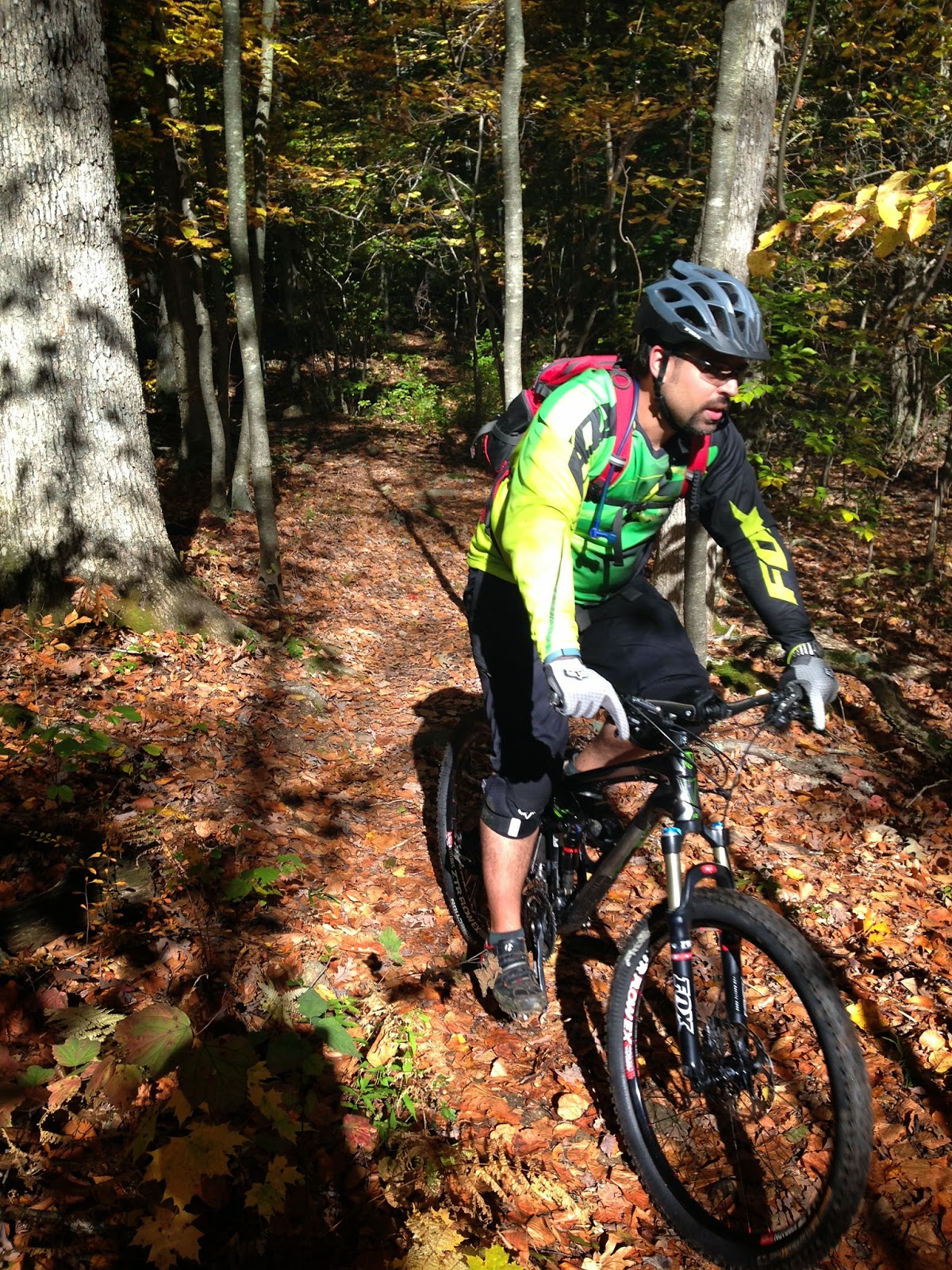 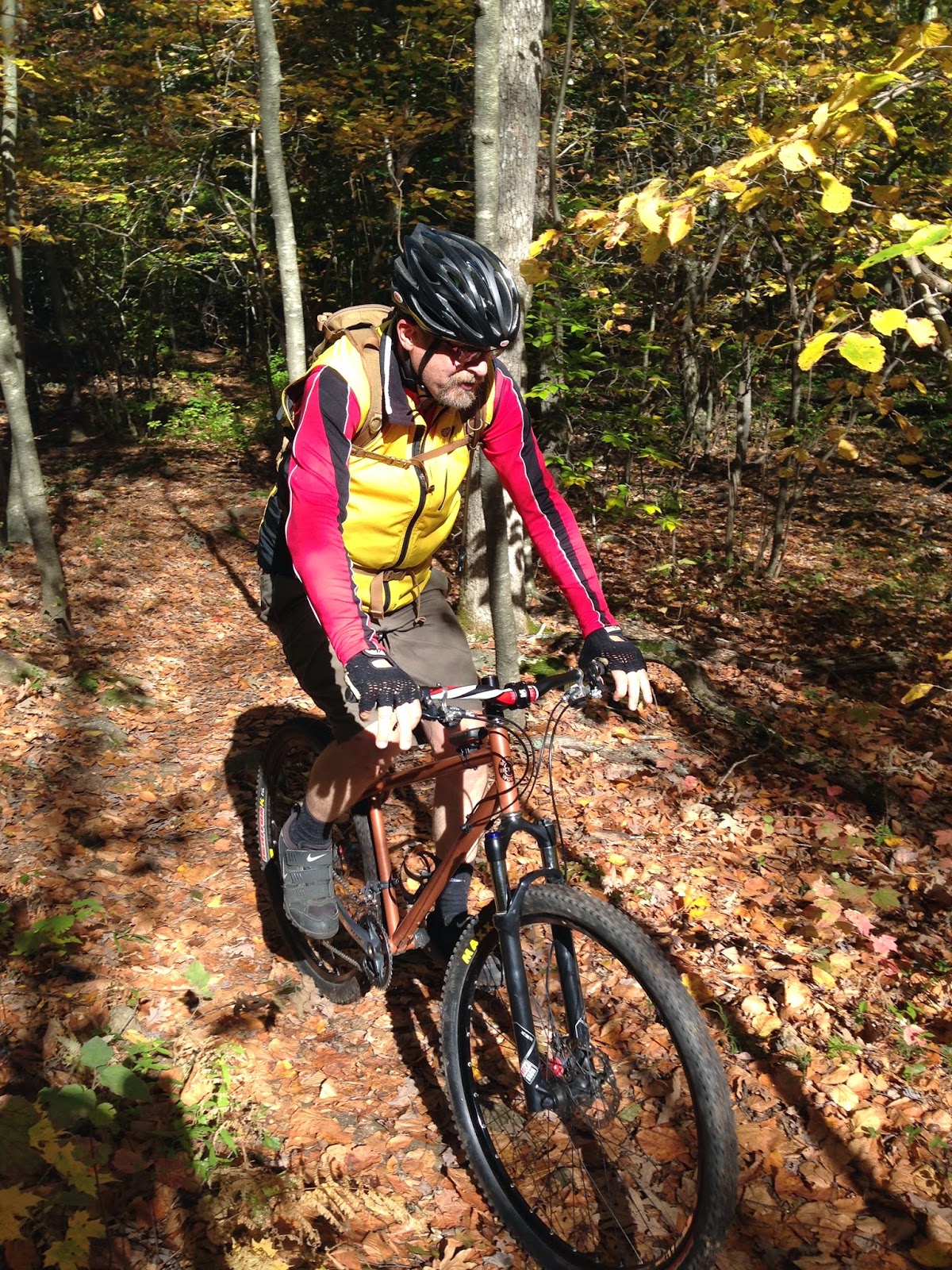 Along the edge of the disputed property with the Stonehenge like barrier my barend caught sapling and I went down hard.  The funny thing was that I was riding kind of slow.  Got a nice cut and scrape near my ankle but it wasn't bleeding profusely so I left it alone.  Further down the trail though my shifting got a little wonky and then my chain went behind the cassette and we had to stop and get it out.  That's when I discovered that the derailleur hanger was bent. 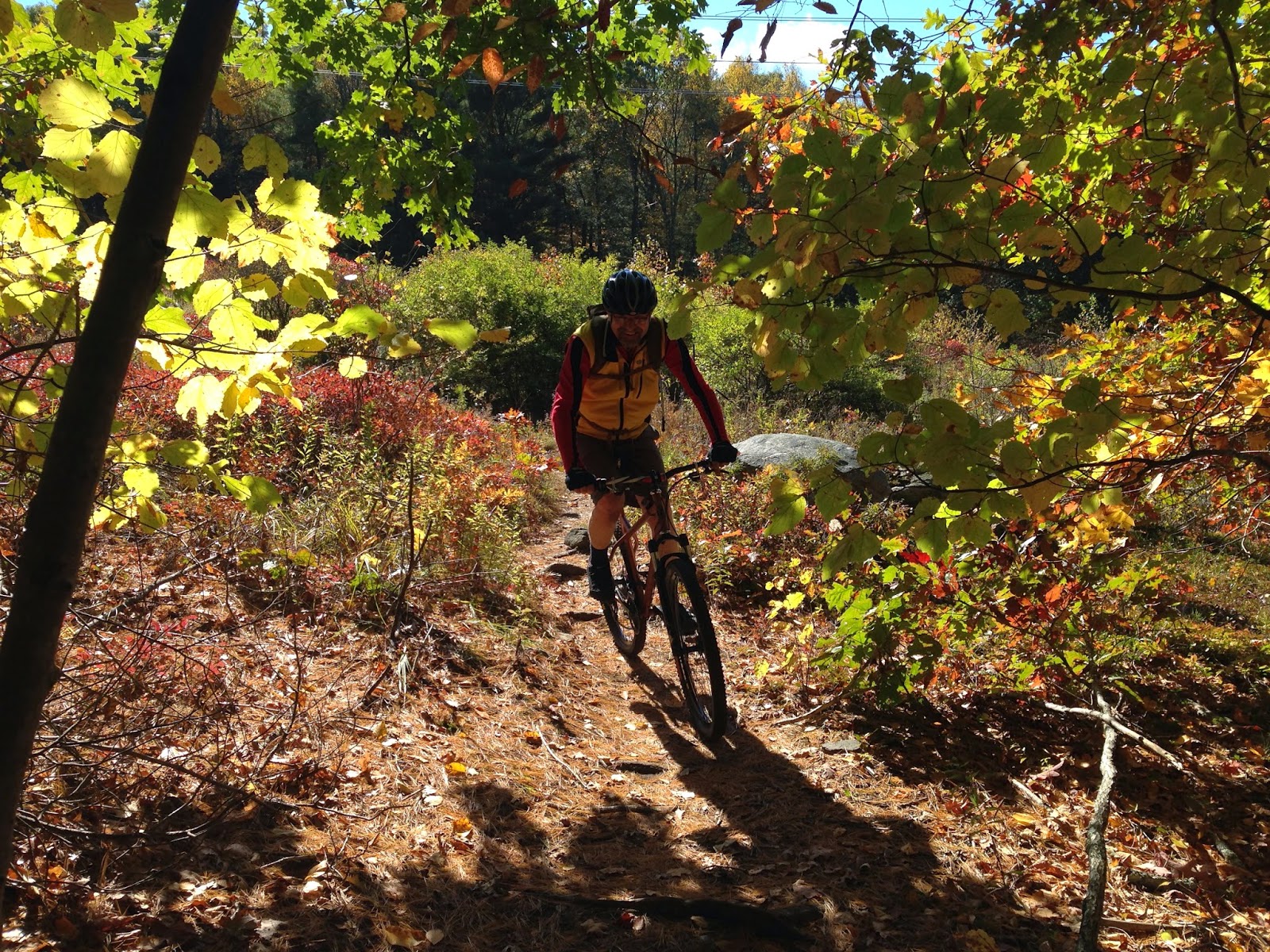 Instead of a 9 speed bike I was now down to 3 or 4 speeds so basically just kept the bike in one gear and rode it like a singlespeed the rest of the way which was 3 more miles. 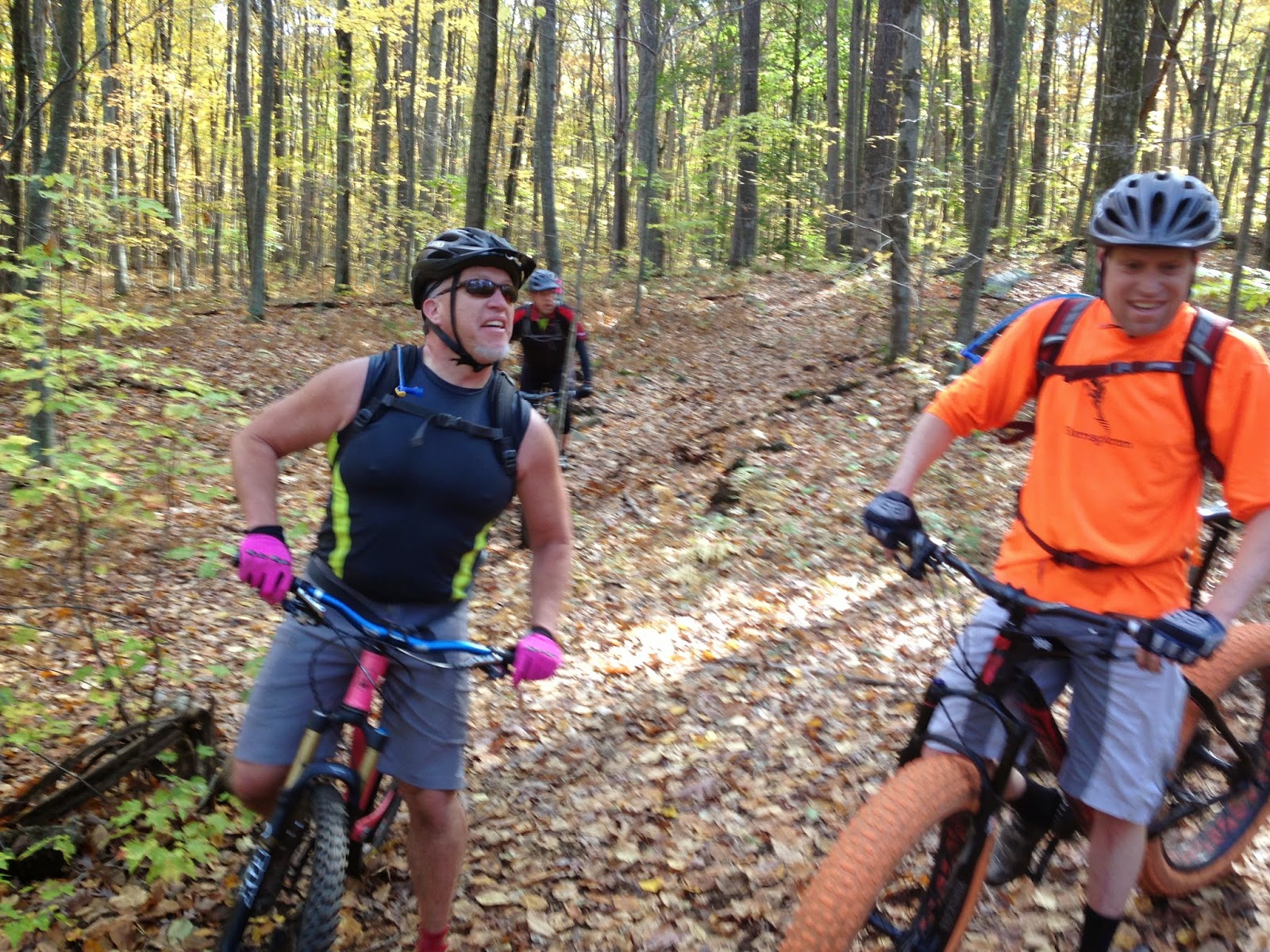 Getting back to the main trail at Gay City we ran into some of the bigger rides that were returning from their adventures into Case Mountain.

Once back at the parking area there was the best pizza from Glastonbury and it was bring your own beverage.  I visited with my buddies from ECHO (Eastern Connecticut Hammer Organization), who just happened to be holding their annual ECHOFest at the same time. They didn't do much riding and were a little subdued than previous years, I guess they are getting old. 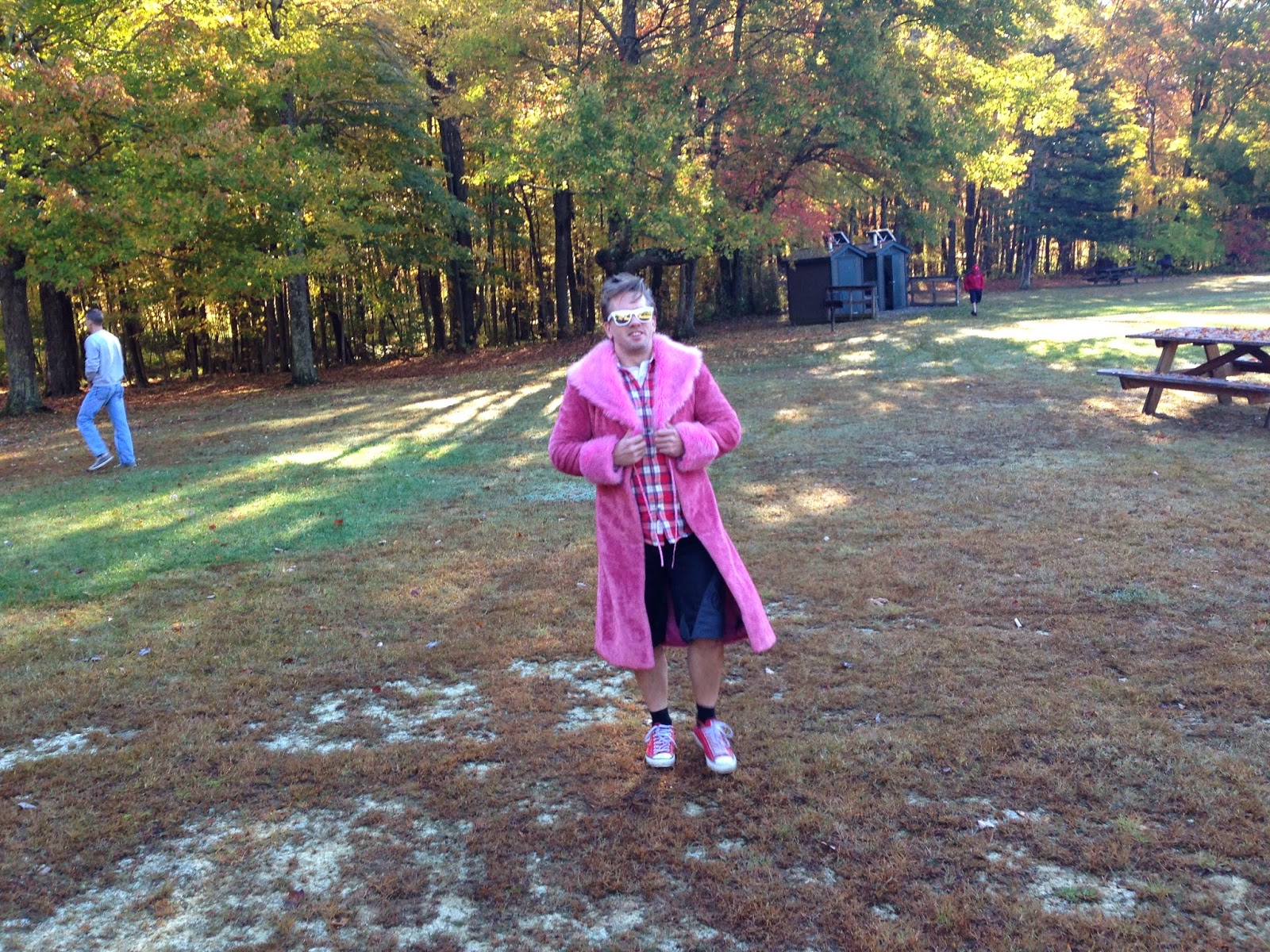 While not riding, they were raffling off a Corona, Full Suspension Mountain Bike.  It was a small. They were seeing who could throw a used rubber (tire) the furthest.  I wanted to stay for the additional events but had to get home to the family.  Maybe they'll start riding and brewing again to make bring back ECHOFest to it's former prominence.