OK, you might think I am being a little obsessive but I am actually considering another bike and I haven't even been riding a year yet but here is my selfish rationale. My first bike (TREK 3700), while its a mountain bike, its more of a recreational bike and its great for pulling Katie on the Trail-a-bike and soon I will pulling Elliot, and eventually Elliot and Brodie together, in one of those kiddie trailers. Now I could sell the Trek when I get the 29 incher but if I am going to put some serious coin into this bike do I want to stress it out with the kids or should I hold onto the Trek?

The other argument for holding onto to Trek is it makes a good loaner bike for anyone visiting that might want tool around the neighboorhood or accompany me on one of my rides in the neighboring forest. So I can't live without the TREK, and if one of the brood is big enough, they are going to inherit it.

My freeride and cross-stuntry bike that I am riding now is an '05 Giant AC and I love it. Love the adjustable rear travel and the feel of riding it. It's got the beefiness that I need for New England riding. However, since its full suspension, its not a true cross country bike.
That leads me to the future number 3 bike. I want something different, something special, and something for racing - yes, I want to start doing enduro races! Therefore, I have decided I want a 29 incher.

So it took me one day to decide on the TREK and I suppose that was foolish (I am an impulse shopper), but TREK was recommended to me by a co-worker, so maybe I didn't do too bad. Where I went wrong was the LBS (Local Bike Shop) whom I think I may have ranted about in an earlier post. It took me two weeks to decide on the AC. Cost and durability were the issues. Willingness to spend good money (triple of what I spent on the Trek) was important and getting my money's worth with something that could take big hits and alot of abuse was also key.

First thing is to find a frame, fork, wheels, brakes, gears, and lastly peddles and yes, I am going clipless.
at 2:17 PM 1 comment:

Another forest road around the big hill! 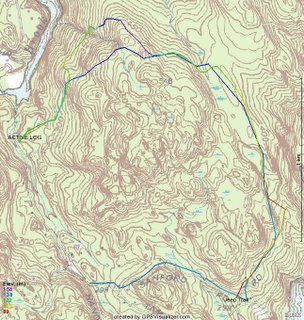 It would make sense that no woodsman or farmer would have climbed directly to the top of the highest point in the forest like the Forest Road (aka Pauly Brody Road) does, so on my ride yesterday, I hung a right into the clearing that I always pass while riding up the backside of said hill. Lo and behold I found a road that skirts the top of the hill. In fact it was cut out of the side of the hill in some spots. While I wasn't paying too much attention but I think there might even be a connector to the blue trail that connects to the white trail that goes to kissing oak. So, here is my ride pull an earlier track of just the Forest Road.
This finally closes the gap of this blue tape trail that I started following last summer north from the forest road but lost it 100 yards in. I am still working on a comprehensive map of all the trails in the Upper Paugussett that once complete I will publish on Bikerag. Since there are hiking trails in the forest, I will point those out in the map, too. According to my friends at NBLA, the Bridal Path (aka West Side Bridal Path in some earlier posts) that would lie atop some blue blazed trail is taking a somewhat circumventing route. Apparently NBLA and The CT Horse Council is taking the top down approach with CFPA in trying to get their trail started. So, I am still waiting to hear back from them. I am planning to walk (uggghh! I hate walking) the trails with my NBLA contact come spring. It could be fun, I can try out the kid carrier backpack that my wife gave me for my birthday, last week.

I found out that AMC is planning a hike in the Upper Paugussett SF next week, Thursday. A friend of mine's husband from Open Space told me that it was said at one of the local health clubs that an individual broke his collar bone in the Upper Paugussett. Anyone reading this from Newtown who might have more details on this, please contact me.
at 11:34 AM No comments: 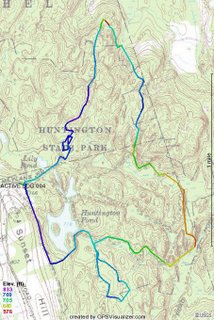 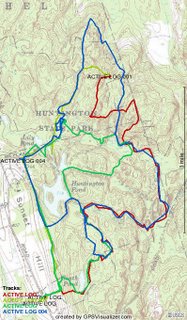 Oh and maybe I should mention that this blog was actually written up in the Danbury Newstimes. In fact, it was on the front cover! I wasn't expecting that. The title of the article was Blogged Out and I think it was a really good article, not for the fact that pictures of me were pasted all over the paper, but for the accuracy of the reporting and the reality of blogging.
at 4:31 PM 1 comment:

Rode with the GPS today in my cell phone holder which is on the shoulder straps of my camel and I think at one point is slipped down to the sternum strap and I lost signal. Hence, no map today but it doesn't matter because I only had time for a quickie. Riding in the snow was increadibly tough because this snow was very wet and about 5 inches deep. Great traction and also great for snowballs, but horrible to peddle in. That was a nice workout for lunch, though, that leftover pizza I had fueled me nicely.

Later in the day, I drove up to Middletown to attend my monthly CT New England Mountain Biking club meeting. If you recall, at the January meeting I volunteered to be the Membership coordinator. I wrote a nifty little database using MS Access to track the memberships and pull statistics monthly. 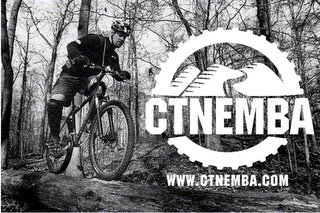 Tonight, I was officially voted in as a board of director. It looks like we will be going forward with my membership postcard idea. That is a 4x6 laminated postcard with CT NEMBA contact information that is to be handed out to people seen mountain biking who are most likely non-members and put on car windshields at popular mountain biking destinations. Hopefully this will attract more people to visit our CT NEMBA website and hopefully join the club and get involved.

The picture is of Deeman from Crankfire.com riding a log at Huntington SP. The picture was taken by Mike Marques, a professional photographer and avid mountain biker. I keep asking him when is he going to put out a coffee table book of all of his pictures because they are awesome!
at 11:57 PM 2 comments:

When they said class would be let out early, I didn't that 2 PM was possible but it turns out that many of the other students in my Business Process Design class, who happen to be consultants, all booked their return flights very close to that time. Good think I decided to bring my mountain bike with me today. So, on the way home, I stopped off at Graham Hills for a little adventure.

There are three legal places to ride in Westchester County and this is one of them. Nestled in the corner of where the Sawmill River Parkway and the Taconic Parkway come to gether in Hawthorne New York is this this little County Park with some fun trails to ride. I rode the perifery trail. There is a map on wmba.org but its not really to scale and kind messed up.

Where the trail comes down the hill towards the Sawmill is where I came upon an abandoned Mercedes 230 and I thought to myself, only in Westchester County would you see an abondoned classic car.

On the return leg, which was up a biiiiigggg hill, can you say hike-a-bike? I found some tight, curvy single track that hit some nice drops and rollers along the way. On the map below, that's the squiggly gps track above the Graham. 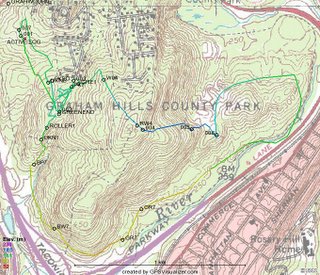 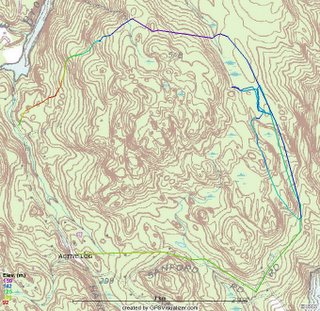 Well if Punxitauny Phill saw his shadow today and it meant there would be 6 more weeks of winter, I'd have to say, No Way! Decided to explore more of this inner trail Saw and immense turd on the side of the trail that had to belong to a bear. Had to bushwack a little to find more trail (old logging road, actually).
at 11:50 PM No comments: